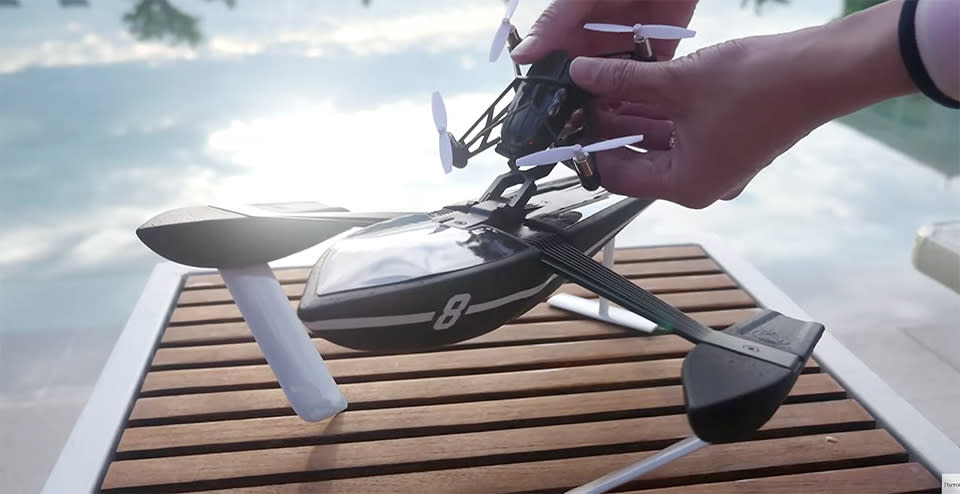 Well, here's a fun surprise! Parrot has just revealed a pile of inexpensive new minidrones, 13 in all, including one that tackles a new medium: water. That hybrid UAV/Boat is called the Hydrofoil Drone, and is joined by a couple of new 'Jumping' drones and a new flying model, the 'Airborne.' Parrot chose to reveal all these new models, which cost a maximum of €200, on its French site and nowhere else, though it recently scheduled a UK event to launch them on July 2nd. We have all the details (and videos) for the new products now, however, so let's, um, dive in!

The Hydrofoil is the most interesting addition, since Parrot has never done a water-based product before. But it's actually a hybrid that uses an 'Airborne' minidrone to power it, so let's start with that.

The Airborne model comes in two flavors: 'Cargo' (€99, or around $110) and 'Night' (€129). Both are pretty tiny at 58 grams and controllable using Bluetooth via Parrot's FreeFlight 3 smartphone or tablet app. Each also has an autopilot that taps a 3-axis accelerometer and gyro for control, along with a speed-measuring vertical camera that also lets you take VGA photos to a 1GB memory card (no video, unfortunately). Charging time is 25 minutes with 9 minutes of autonomy, and you can cruise at up to 11mph while doing "aerobatic" maneuvers including loops and flips.

As for the different flavors of Airborne, the 'Night' drone is equipped with LED lights to let you fly around in the dark and even flash Morse code signals. The 'Cargo' model, meanwhile, has an adorable Lego-style receptor so that you can... send Lego bricks to your friends, we guess? It wouldn't be the most efficient way to send Lego, but it would be the most fun. Or you could pretend that the bricks are parcels and that you're Amazon.

As mentioned, the €169 (around $190) Hydrofoil Drone is a hybrid boat/UAV model that's powered by an Airborne drone. You simply attach the Airborne model to the boat and fire it up, at which point it flips it to a vertical position. You can then steer it around the water using your smartphone, with a first-person view through the Airborne's camera. Once the Hydrofoil section starts to plane, it can hit around 6mph and buzz around calm, fresh water for around 7 minutes. Judging by the video (below) it looks peppy, maneuverable and... well you probably don't need any more convincing.

Finally, we have a bunch of new Jumping Drones. As with the previous Jumping Sumo, they're basically two-wheeled remote-controlled cars that handle rough terrain and do a unique trick: jump up to 32 inches in height or length. They come with retractable wheels and an on-board camera that gives you first-person steering and captures video live to a 4GB memory card. You can even record and broadcast your voice to freak out your younger siblings, thanks to a built-in microphone and speaker. As with the Airborne drones, it comes in two models: A Jumping 'Night' drone (€199, around $220), with similar LEDs and capabilities to its flying sibling, and the Race Drone (also €199), which can buzz along at a much quicker 8mph.

Parrot hasn't said when all these new models are coming to the US, but as mentioned, they're planning on a wider reveal on July 2nd. There's no US pricing yet either, but the it should hew pretty closely to the European figures.

In this article: Airborne Drone, Hydrofoil Drone, Jumping Drone, Minidrones, Night Drones, Parrot, UAVs, video
All products recommended by Engadget are selected by our editorial team, independent of our parent company. Some of our stories include affiliate links. If you buy something through one of these links, we may earn an affiliate commission.