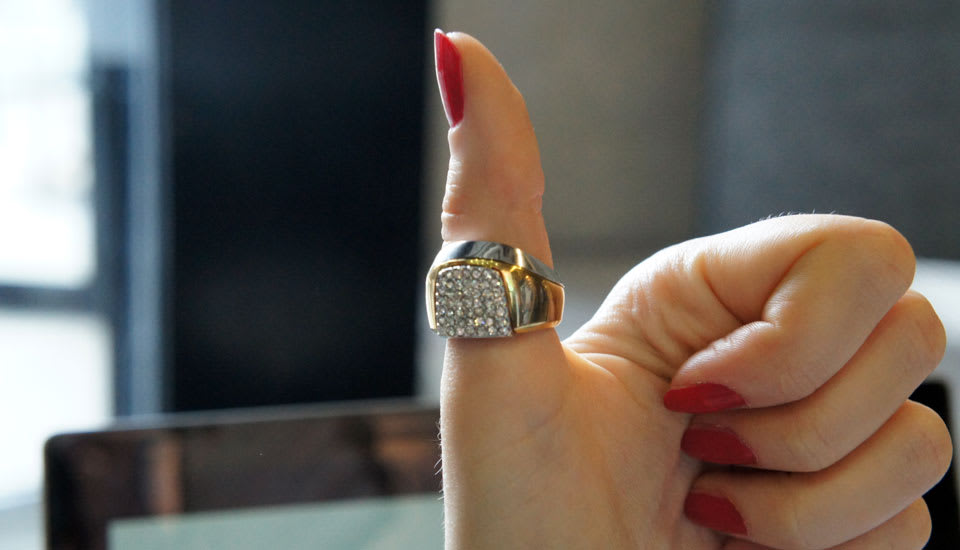 "I know that we can't change people's behavior," says Irina Rymshina, "but in later life they may want children and they certainly don't want cancer. I think that we can help them." She's talking about Hoope, a wearable device that, it's hoped, will be able to put an STD clinic on your thumb. If successful, then you can say goodbye to the idea of having to pee in a cup to make sure that you can go out this weekend.

That's why the idea of this purity ring is so attractive, since it'll bring the technology out of the clinic and the lab and into the home. So far, the company has the technology in rough form, but is now working on shrinking it down into a finger-friendly form factor. Hardware-wise, the majority of the ring contains a battery that'd be re-juiced on a charging plate or dock, as well as a wireless module that's currently being worked on. Although the company has stressed that the communications chip will categorically "not be Bluetooth."

Where the ring setting would ordinarily sit is a void where a user can slide in the "lab on a chip" cartridge. Inside this single-use unit is a needle and a testing kit that'll look for the various antibodies produced by these common diseases. Chemicals inside the device then denature the blood, enabling you to throw the unit straight into the trash rather than treating it as biological waste. Within a few seconds of the blood being drawn, a diagnosis is sent to your smartphone's companion app, that'll tell you if you have anything, what you have, and send you directions to your nearest clinic.

The company also boasts that its neuromodulation system is sufficiently advanced that drawing blood is painless. As we're talking, however, a man walks up and blurts out "is this the... STD ring?" Hoope may have only been going for the last 10 months, but it's already notorious. Several people have asked why the device is shaped as a ring, to which Rymshina jokes (I think) that "the only way to stop the risk of catching a disease is to get married, right?" 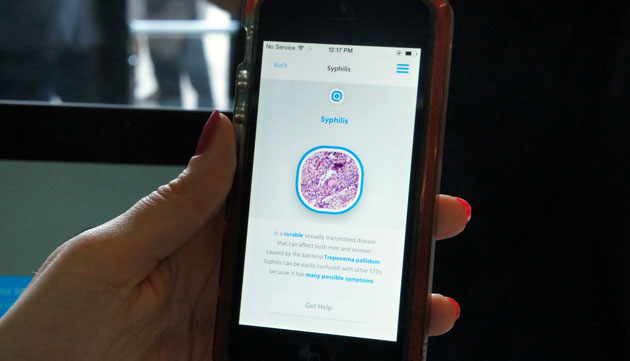 The company is an international collaboration between three people who met at Singularity university in Silicon Valley. The device was envisioned by Rymshina, a Russian finance graduate, Damel Mektepbayeva a Kazakh biotechnologist and Ernesto Rodriguez Leal, an engineer from Mexico. The trio hope to launch the ring for a rough cost of $50 in the developed world and to use the profits from that enterprise to launch the technology (but not the form factor) to the developing world. The idea being that they can eventually get STD tests for the world's poorest people to just $1 at a go.

As you know, FDA regulations require stringent medical testing before a company can market it as a "medical device." Hoope, however, is considering going the easy route, launching on Indiegogo campaign and selling the hardware as a gadget that would only be able to hint at what sort of disease you've caught. In that case, testers would be told that they have an infection with "syphilis-like symptoms" to get around the regulations. There's another market the company could go toward — since it's already garnered attention from pharmaceutical firms that see the technology as a lightweight replacement for an epi-pen.

As we talked, there seemed to be a tension between the idea that a pragmatic solution to the issue of sexually transmitted diseases and a sense of condoning what is otherwise reckless behavior. The idea that the rings would be worn out in public, too, seems far-fetched, since we doubt too many people currently carry around a test certificate from their local clinic that says the same thing. Still, on paper the idea is solid and we're interested in seeing how far the company can go.

Source: Hoope
In this article: AdultThemes, HelloTomorrow2015, Hoope, Medicine, Ring, STD, Testing
All products recommended by Engadget are selected by our editorial team, independent of our parent company. Some of our stories include affiliate links. If you buy something through one of these links, we may earn an affiliate commission.