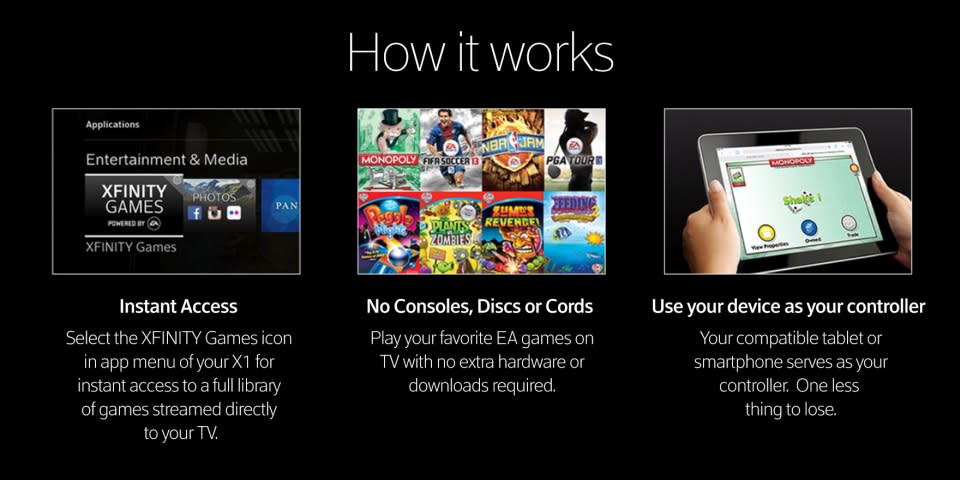 Not happy with simply launching its Stream video service this week, Comcast announced the start of a beta test for Xfinity Games. A partnership with Electronic Arts (confirming Reuters rumor from last year), it's not going to compete with PlayStation and Xbox, but is closer to what Roku, Amazon and Android are already doing for TV gaming. At least for now, the games offered are older and mobile-versions of games like Plants vs Zombies, Real Racing 2 or FIFA 13. There's not a connection for a standard gamepad, so players control them with phones and tablets (right now the list appears to cover iOS, and mainly Samsung Galaxy phones/tablets on the Android side). The main requirement? Comcast's X1 TV platform, so if you have it you can sign up to be a beta tester here. X1 isn't ready to be a powerhouse gaming platform yet approaching the level of OnLive or PlayStation Now, but with this and home automation add-ons, it's clear we're not the only ones thinking of the cable box as a the center of your connected home. Now, let's see if we can get Yu Suzuki to launch a Sega Channel Kickstarter. In this article: android, Comcast, EA, ElectronicArts, hdpostcross, ios, SegaChannel, streaming, video, X1, XfinityGaming
All products recommended by Engadget are selected by our editorial team, independent of our parent company. Some of our stories include affiliate links. If you buy something through one of these links, we may earn an affiliate commission.