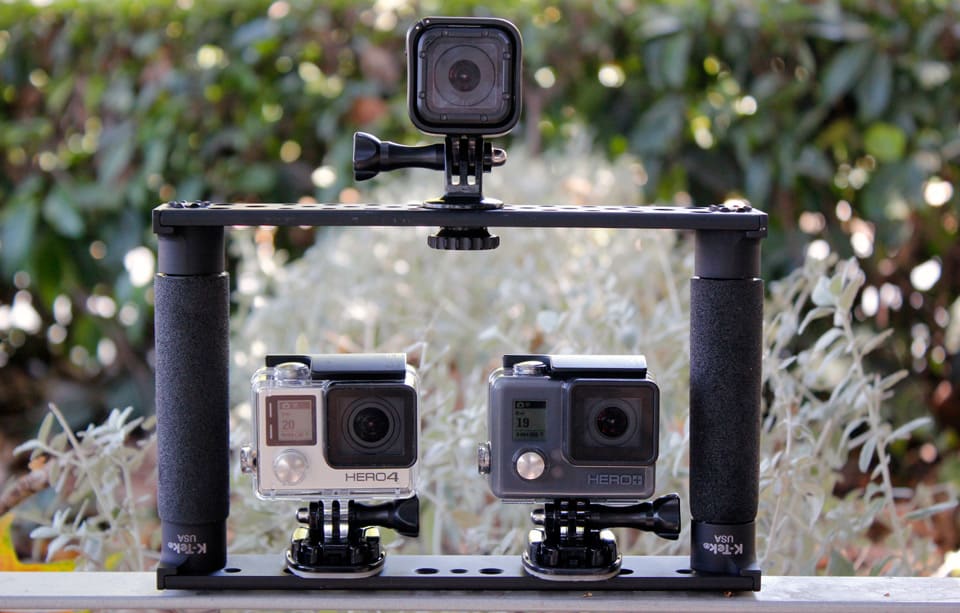 Last week, GoPro announced the Hero4 Session, a small, square camera that doesn't need a waterproof housing. The diminutive size and simple controls (one press turns it on and starts it recording) gave the Hero4 Session unique character, but its price -- $400 -- caused a few double-takes. Why? Because that makes this 1080p camera (with 8-megapixel stills) just as expensive as the Hero4 Silver, a camera that shoots in higher resolution (2.7K and low frame rate 4K) has an LCD touchscreen, among other flagship features. Then there's the Hero+ LCD, which costs $100 less than the Session, but has similar shooting modes (1080p at 60fps video, and 8MP stills). You may be wondering exactly where the Hero4 Session fits in, and which one might suit you best. I did a little image comparison to help you with that.

I kept things pretty simple. All three GoPros are mounted on a K-Tek Norbert Sport Junior (as seen above, and recommended in our accessory guide), and controlled via WiFi remote to trigger them all at the same time. For video, I set all three to 1080p/30fps (wide), with Protune turned off -- a standard configuration for multiple use cases. For images, the Hero+ LCD and Hero4 Session were set to their default/highest setting, which is eight megapixels (wide). The Hero4 Silver was set to the nearest equivalent, which is seven megapixels (wide); it's possible to shoot at 12MP, but I wanted to keep things as close to like-for-like as I could.

It doesn't matter what the spec sheet says; it's real-world results that count. When it comes to image quality, there are a number of factors to consider, but two of the biggest concerns are color reproduction (how authentic they are) and image sharpness/detail. All the images in this article have been resized in Photoshop to fit the post width. Larger images are available in the gallery above. 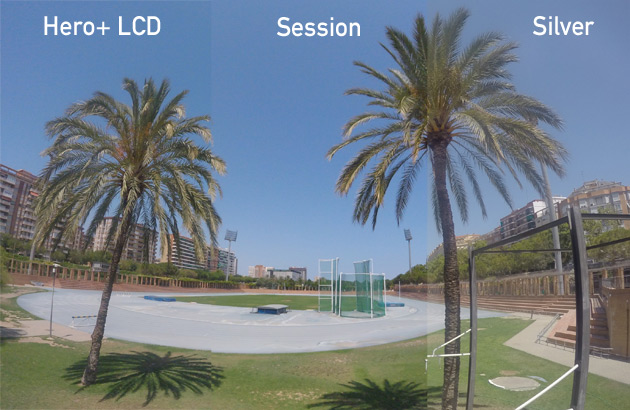 The image above is a composite of the same shot from all three cameras. At the size here (630 pixels wide) it's not easy to see the different levels of detail captured. The Hero+ LCD and Hero4 Session have a very similar color tone; the Hero4 Silver is a little more washed out. The biggest difference is in the sharpness/detail. When I view the images at 100 percent, the difference is quite dramatic. The Hero+ LCD does an OK job at making out the individual palm leaves; the Hero4 Silver is the clearest by far, with visible definition on each leaf. The Hero4 Session, however, is a smudgy mess. Edges are blurred, and there's much more noise. It looks pretty terrible compared to the other two, as you'll see in the GIF below. Converting it to a GIF loses a good amount of detail, but all three went through the same treatment, and the difference is still striking.

The difference between the Hero4 Session and the Hero+ LCD isn't always as pronounced as this. Sometimes the image clarity is very similar, but in my testing, if one of the two cameras comes out looking worse, it's usually the Hero4 Session. The Hero4 Silver on the other hand is, one might expect/hope, consistently sharper, with images looking finer and clearer across the board.

One thing I noticed while doing this test is that the Hero+ LCD and Hero4 Session appear to have a very similar color profile. Reds are slightly hot, and blues are cool. The screen grabs/video stills above are a good example. Both the red tiles in the mosaic and the terracotta tiles surrounding the column are considerably warmer than the more natural tones as captured by the Hero4 Silver. Conversely, the blue of the sky is paler in the Hero+ LCD and Hero4 Session, and more vibrant in the Silver. At 3PM on a hot day in Valencia, Spain, the sky is much closer to that as captured by the Hero4 Silver.

When viewed side by side, the Hero4 Silver can appear a bit weak. But, like watching a TV with the colors juiced right up, or with added saturation, natural tones can feel a bit pale by comparison, even though they are actually more authentic. The trees are a good example. The Hero4 Silver shows a punchy green, whereas the Hero+ LCD and Hero4 Session look too strong -- and unnatural because of as a result. 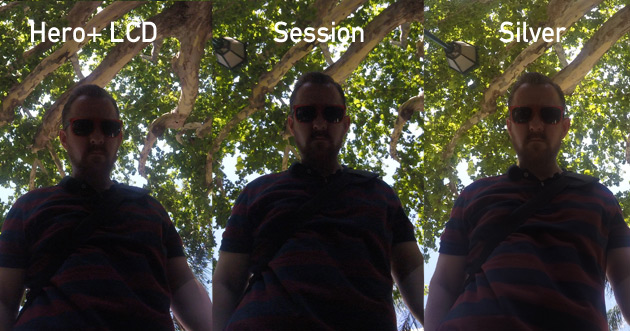 Many people probably never even think about dynamic range when buying an action camera; I know I don't. That's because it's not something that causes a problem, until you find yourself in a situation with funky lighting, such as the one above. The subject (me) is at the front of the scene, but the light above the trees (the cameras are facing straight up) is causing me to come out darker. All the cameras have spot metering -- a setting that adjusts light around the subject -- but it's not always convenient to switch this on.

The composite image above follows the same trend as with sharpness and color -- the Hero+ LCD and Hero4 Session underexpose the subject a little, while the Hero4 Silver does a better job at balancing the background and foreground. The stripes on my shirt are barely visible via the other two cameras, with the Hero4 Silver being the only one to really pick them out.

When there's not much light, any camera is going to have to work harder to deliver a good image; that's true across the board. What's interesting with this photo is how different all three cameras performed. In a flip of the script, the Hero+ LCD delivered the best image. The colors are natural and despite the contrast between the dim street and the sky, you can still make out details on the buildings. The Hero4 Session doesn't do a terrible job, but for some reason introduces an orange hue, particularly noticeable on the hood of the car. Even more surprising, is how the Hero4 Silver struggled. The slow shutter speed caused the image to come out blurry. This wasn't consistently the case, but I picked this image out, as it shows how, on occasion, the other two cameras can best the Hero4 Silver.

One of the key features in the Hero4 Session was a new dual-microphone configuration. The idea is that, when one camera gets bombarded with wind or background noise, the camera switches to the other one for clearer audio. The challenge is providing good audio in a camera that's waterproof without a housing. The naked Hero4 Black or Silver record much better audio when not in the enclosure, but with the Hero4 Session, this simply isn't an option. The Hero+ LCD is also waterproof, but while it doesn't have a separate housing either, that's because it's effectively glued into one permanently; as such, its audio is always of the "housed GoPro" variety.

Below are three audio clips lifted from their respective videos (it wasn't that interesting, sorry). I chose a location where there were high levels of background noise (thanks to the crickets), and a bit of wind. The unpredictable nature of the wind, however, makes it hard to test this dual-mic feature with any level of confidence -- it's not always coming from the same direction, after all.

As you'll hear in the clip, in terms of volume, the Hero4 Session wins out. Both the Hero+ LCD and the (housed) Hero4 Silver sound much quieter, and muffled. The flipside of that is that neither of those two picked up the wind at all. You can hear it on the Hero4 Session, but it still does a pretty good job with it. Wind noise can easily make a microphone "clip" (when the volume goes above the max it can handle), but the Hero4 Session pushes it down to a manageable level.

So, I'd really like to spend some more time testing out different audio situations, but the Hero4 Session does an admirable job. If you listen carefully, you can even hear the low tones of cars pulling away in the distance. Like for like (i.e., a waterproof setup), this is a definite win for the Hero4 Session.

Anyone who's been using GoPro cameras for any amount of time will likely have a good stash of batteries. Typically, you can expect about two hours of video per battery (depending on your settings, etc.). This is a problem for the Hero+ LCD and the Session, however, as neither of them has a removable battery. That means once it's gone, you need to stop and charge it. The Hero4 Session has one thing in its favor here: It switches off when you stop recording, so there's less waste while the camera idles. The other two cameras in this test will remain on, until you manually switch them off. They both have battery-guzzling LCD screens to support, too.

My test was simple, set the cameras to record video (at 1080p/30fps) and see how long the resulting video was. The Hero4 Silver managed 119 minutes on average. I tested a few different batteries (official GoPro 1,160mAh cells) in case any had lost some of their capacity, but two hours on the nose was fairly consistent. The Hero4 Session turned in a respectable 141 minutes -- which means it's eking out another 20 minutes on a smaller battery (1,030mAh). The winner, surprisingly given it has the same 1,160mAh battery as the Silver, was the Hero+ LCD that managed an average of 160 minutes. The real test is how long the Session lasts over a day of turning it off and on in practical use (while you leave the other cameras on between shots). It's virtually impossible to replicate under test conditions, though. 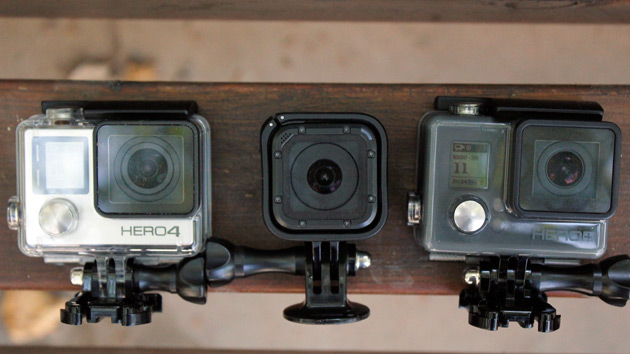 This test is far from exhaustive, but some things seem clear. Namely, that without doubt (and unsurprisingly), the Hero4 Silver is the best of the three. It wins by a country mile when it comes to image quality, and that really is the most important thing. Colors are more natural, and it's better at handling difficult lighting. It's not all win; we saw that low light can trip it up, and audio suffers when it's in a case. Battery life isn't ideal, but at least you have the option to swap in a new one and keep going.

In this article: actioncam, actioncamera, engadgetirl, gopro, goprohero4session, hero4, hero4silver, heropluslcd, session
All products recommended by Engadget are selected by our editorial team, independent of our parent company. Some of our stories include affiliate links. If you buy something through one of these links, we may earn an affiliate commission.