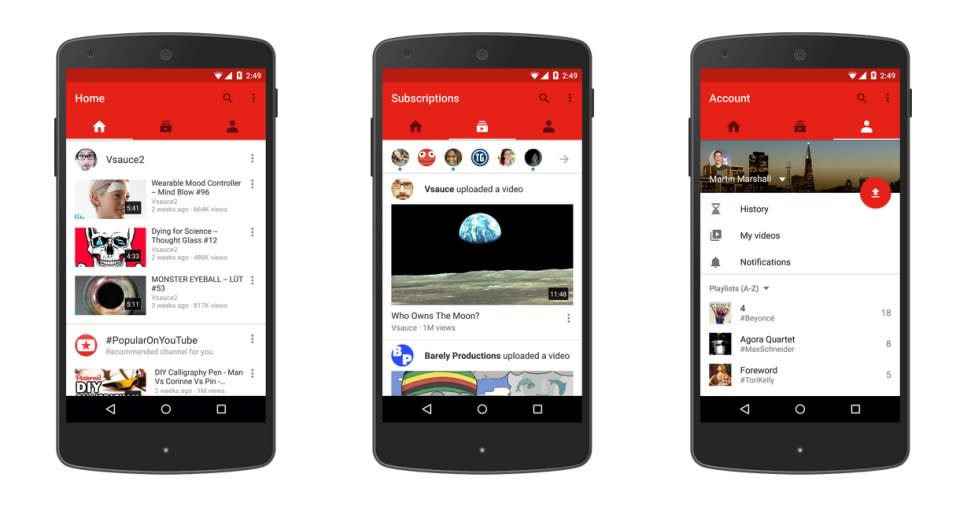 During a keynote speech tonight at the 6th annual Vidcon event, YouTube CEO Susan Wojcicki announced a new version of its mobile app. Available on Android and mobile web browsers now (iOS coming soon), it makes it easier for creators to publish and edit directly in the app, and easier for viewers to subscribe to a channel with just one button touch (and with ten million of those touches, channel owners can earn the new Diamond play button reward). The redesign even puts your subscriptions and profile right at the top for easy access. This is also the version that adds the ability to watch those vertical videos in full screen, so expect that to come your way soon if you don't have it already.

Update: An update to the iOS app is out that brings fullscreen vertical video support to your iPhone too.

One thing that's not there yet? Support for real 3D virtual reality video, like the kind we've seen from NextVR. That's coming soon, to take things a step further than the current 360-degree support (with 360-degree ads). According to Wojcicki, watch time is up 60 percent across devices, and 100 percent on mobile from last year, so we'd expect there's a lot more planned to keep that growth going.

In this article: 3d, app, diamondplaybutton, google, mobile, SusanWojcicki, vidcon, vidcon2015, video, vr, youtube
All products recommended by Engadget are selected by our editorial team, independent of our parent company. Some of our stories include affiliate links. If you buy something through one of these links, we may earn an affiliate commission.