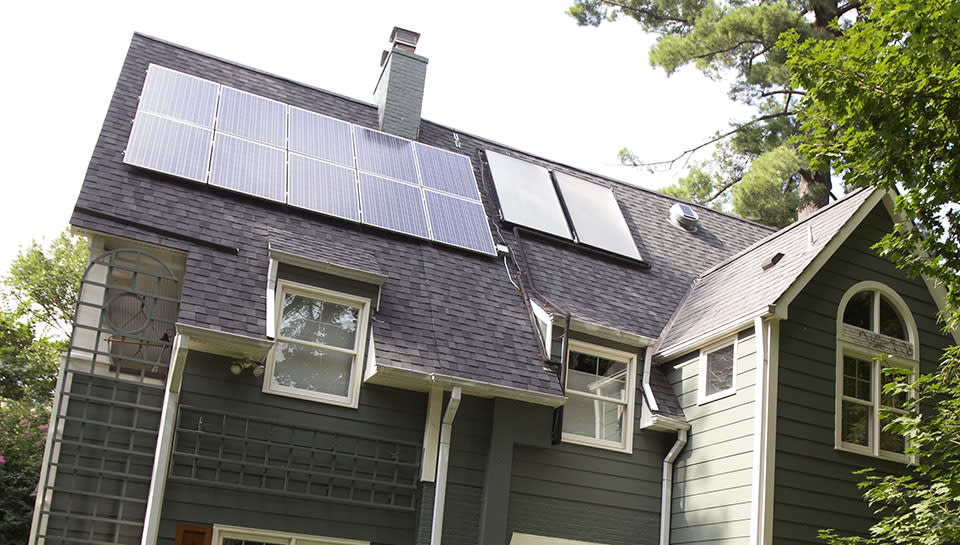 Our sun blasts out over 50 percent of its energy as "near-infrared" light, but solar cells only harvest visible light. As a result, the best commercial panels only convert about 20 percent of solar energy to electricity. Researchers from UC Riverside have now figured out how to "upconvert" infrared energy into much more useful visible light, a process that could make solar panels up to 30 percent more efficient. To do it, the team combined semiconductors with organic molecules, resulting in a material that essentially helped them "reshape the solar spectrum," according to lead researcher Christopher Bardeen.

Scientists have long understood that two infrared photons can be combined to create a single visible photon. That process has obvious value for solar energy, but creating a practical way to do it has been elusive. The UC Riverside team managed to convert infrared light into orange/yellow light, nearly doubling the energy of the original photons. Bardeen explains: "The (semiconductor) absorbs two (infrared) photons and passes their energy on to an organic compound for combination. The organic compounds then produce one high-energy (visible) photon." The result? Light that can be absorbed by photovoltaic cells that would have otherwise been wasted.

Before such research can bear fruit, Prof. Bardeen told me that his team needs to boost the efficiency of the infrared-to-visible conversion to 10 percent or more. It also has to occur in a solid-state material rather than the liquid solutions shown above. "If we accomplish both those steps, then we can envision adding an upconversion coating to standard solar cells that are already commercial products." He said efforts so far are "promising," but we need to add the usual caveats about solar energy research -- not much of it ends up being commercialized.

Source: UCR Today
In this article: Infrared, Solar Energy, Solar Panels, UC Riverside, upconvert
All products recommended by Engadget are selected by our editorial team, independent of our parent company. Some of our stories include affiliate links. If you buy something through one of these links, we may earn an affiliate commission.