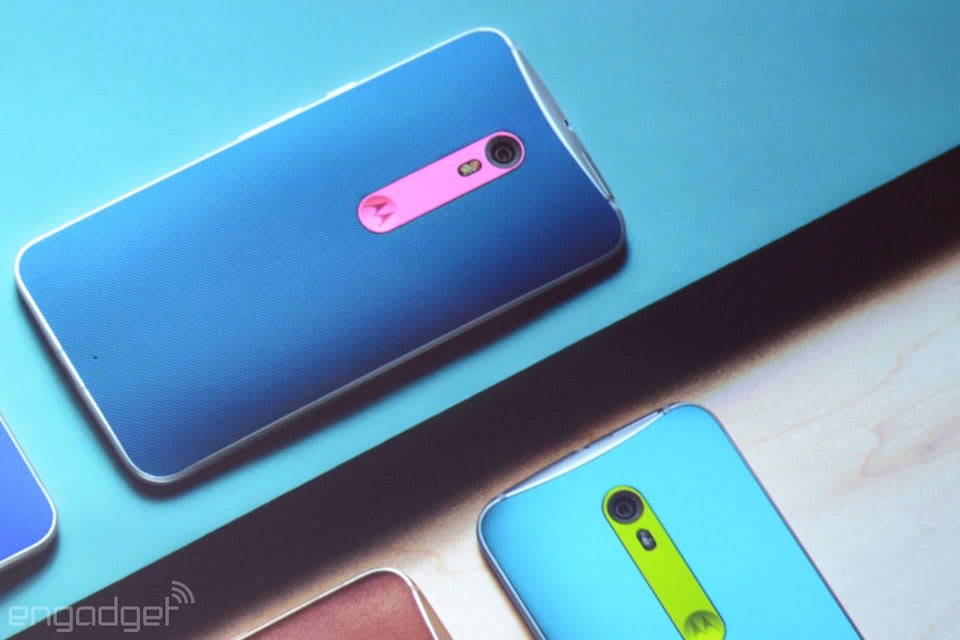 The Moto X is alive and well in 2015. The latest iteration of the highly customizable flagship, dubbed the Moto X Style, has a giant 5.7-inch Quad HD screen with the tiniest of bezels. It also has a six-core Snapdragon 808 processor, 3GB of RAM, front facing stereo speakers, a 21-megapixel camera and "TurboPower" quick charging technology. But what you really care about is those lovely customizable elements, like the back plate and metallic accents. Those luxurious leather and wood pieces you love are back, of course. But there's also a new silicone finish for the rear of the device that has a "soft feel" and a "warm look." Though, we're reserving judgment until we get to grope it ourselves.

As you've come to expect from Motorola devices, there is no skin here. You're getting as close to vanilla Android as possible, without buying a Nexus device. Of course, you can always buy the Pure Edition of the Moto X Style and get even closer to that Nexus experience. But if you go with the standard version, you will get Motorola's add-ons like Moto Assist, Moto Display and Moto Actions, which are actually kind of helpful and minimally intrusive. Oh, and all of this is running on Android Lollipop 5.1.1. No aging and outdated version of Google's OS here.

Inside is a 3,000mAh battery that Moto claims will give you 30 hours of "mixed use." Which we're going to assume means the average Engadget editor will get about 12 hours from it. Thankfully that TurboPower feature should get you back to a full charge pretty quickly. Motorola claims its charges 50 percent faster than a Galaxy S6.

There will be 16GB, 32GB and 64GB models. But interestingly, the phone will also support microSD cards up to 128GB, in case you can't deal with internal storage only.

As far as price, what we know now is that it will be "$200 to $300 less" than the latest from Apple and Samsung. But what that translates to when purchased at a subsidized price from a carrier isn't clear just yet. But you can get the Moto X Style Pure Edition from Best Buy, Motorola and Amazon starting at just $400 (seriously) in September. That device will work on any LTE network in the US, is unlocked and has zero carrier bloat. Eventually, there will be carrier-branded versions, but there's no info about that right now. Instead Motorola is focusing on direct-to-consumer online sales and bypassing the traditional carrier-subsidized model.

16
In this article: android, breaking news, lenovo, mobilepostcross, motorola, motox, motoxstyle, style
All products recommended by Engadget are selected by our editorial team, independent of our parent company. Some of our stories include affiliate links. If you buy something through one of these links, we may earn an affiliate commission.