An efficient new depth sensor was inspired by spider eyes 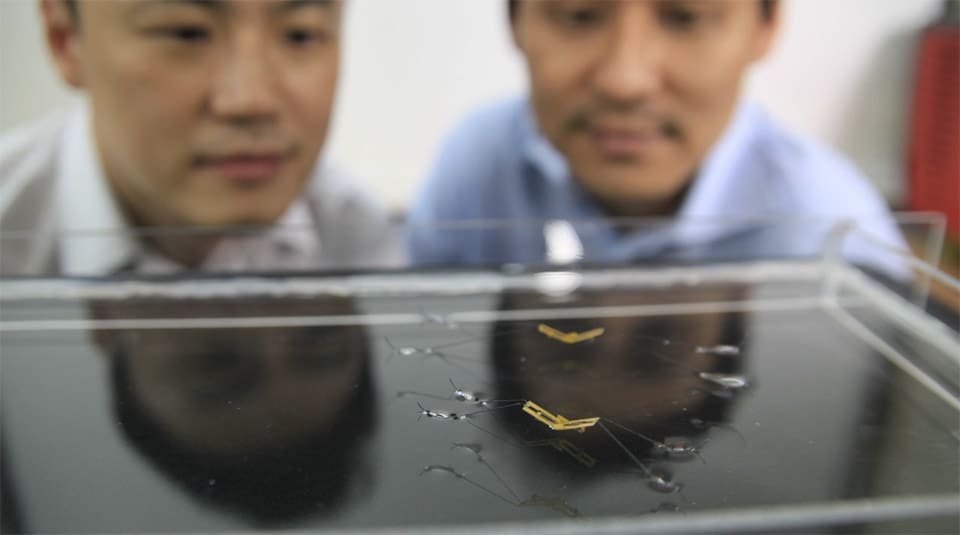 Harvard's Wyss Institute for Biologically Inspired Engineering has a history of creating tiny, insect-inspired robots, and its latest one can stand and jump on water just like a strider. The Wyss group has teamed up with scientists from Korea's Seoul National University and Harvard's John A. Paulson School of Engineering and Applied Sciences to design a machine that can mimic a water strider's "most complex maneuver." In order to accomplish that, they captured actual insects jumping on camera and studied their movements closely to determine their secret.

According to one of the study's senior authors, Kyu Jin Cho:

Water's surface needs to be pressed at the right speed for an adequate amount of time, up to a certain depth, in order to achieve jumping. The water strider is capable of doing all these things flawlessly.

Based on the team's observations, striders can do all those thing perfectly thanks to the slightly curved tips of their legs. After figuring out what morphology and movements to copy, the group managed to build a robotic insect that uses a lightweight catapult mechanism. It can exert force equivalent to 16 times its body weight without breaking the water's surface and perform real strider-like jumps. To note, a separate team developed a robot based on the same insect years ago, but it was much larger than its real-life counterpart. This team's creation is comparable in size to actual striders, as you can see in the video below.

Small robots like these could eventually be used for search operations, among other purposes. And since this particular one was created by manufacturing folded composite structures that self-assemble, it will be easy to make in large batches.

Source: Harvard
In this article: harvard, insect, nature
All products recommended by Engadget are selected by our editorial team, independent of our parent company. Some of our stories include affiliate links. If you buy something through one of these links, we may earn an affiliate commission.