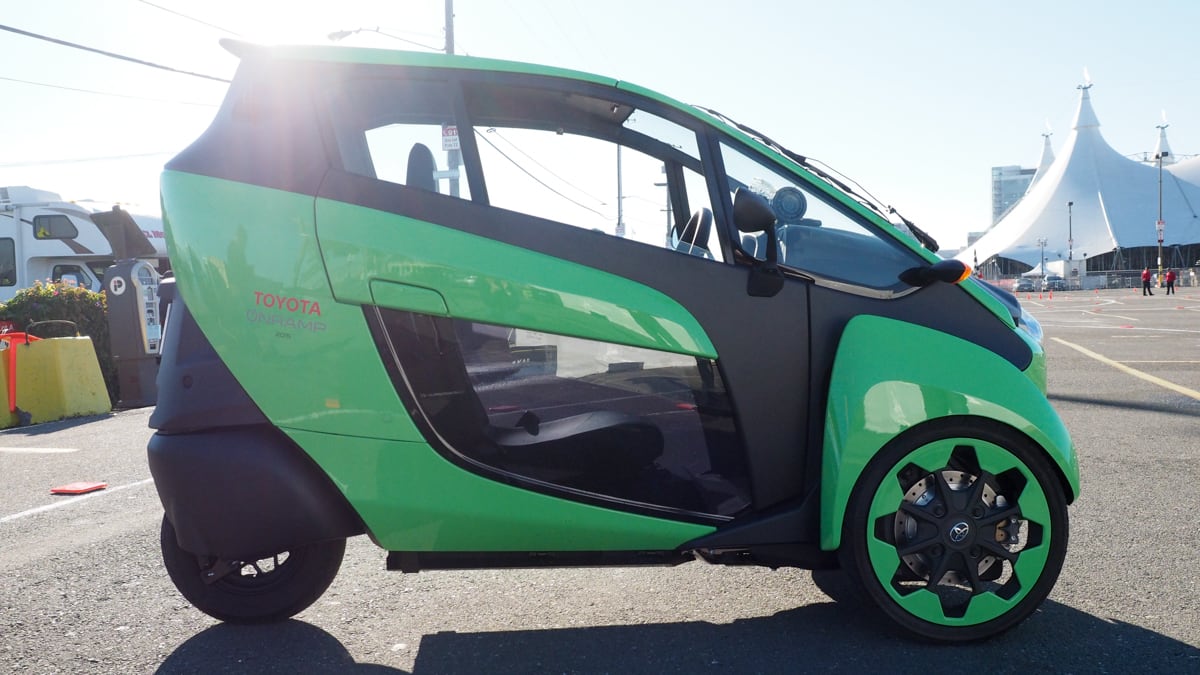 While typically underpowered, small cars can be a hoot to zip around dense cities. They weave in and out of traffic that trap larger vehicles and more importantly, they're easier to park. The electric Toyota i-Road takes that idea and, like a CSI photo, enhances it until it's hard too believe what's going on is actually real. The three-wheeled electric vehicle does have the same attributes as its tiny brethren, but the first time you turn that wheel, you realize its more fun than a typical urban commuter. Born out of the idea of combining the compact size of a motorcycle with the safety of a car, the i-Road may look like a rejected light bike prototype from TRON, but the future-forward design delivers when you get behind the wheel. Instead steering with the front wheels, at slower speeds the rear tire turns to direct the vehicle. Once you're actually driving on the road, the cabin actually leans into the turn like a motorcycle. Toyota calls it Active Lean and even though I knew it was about to happen, the first time I cranked the steering wheel, I was surprised and delighted by how much the car tilted.

Oddly, when project general manager Akihiro Yanaka decided the i-Road should lean into turns, he wasn't thinking of two-wheeled transportation, he was thinking about the slopes. Because he wanted the vehicle and driver to move in synchronization, he thought of skiing. In fact, the company created a video to show just how the car runs the slalom just like a skier.

Skiing was the last thing on my mind while testing the car on a cone-defined parking-lot track. Instead, the more natural association was with the Vespa I currently use to get around San Francisco. But instead of me leaning for a turn, the car does it for you. Initially, the auto-lean catches you off guard. But after a few laps, I got used to moving in tandem with the peppy i-Road.

The electric motors attached to the front wheels are zippy, but the car tops out at 37 miles per hour. This is purely surface-street city vehicle. But because selling a car that only functions in a urban environment is out of the ordinary in the US, you won't see it in showrooms any time soon. While the company already has car-sharing pilot programs in France and Japan, it's still trying to determine how the i-Road will work in the United States and elsewhere. In fact, the reason the i-Road was available for test drives in San Francisco was because Toyota had invited teams to introduce new business plans for the vehicle. 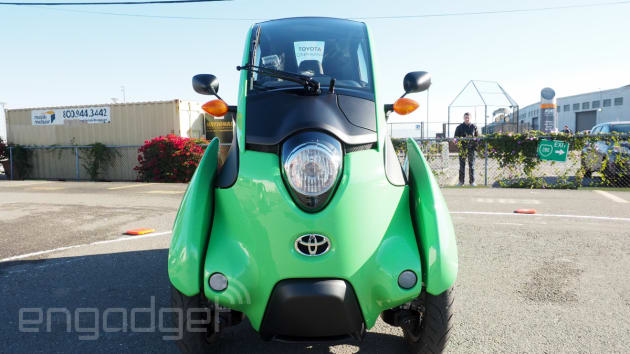 The reality is that i-Road will likely appear on these shores the same way the Nissan New Mobility Project (aka Renault Twizy) did. As part of car-sharing solution that gives city dwellers the ability to rent a vehicle for short jaunts. If it does make it here, expect grinning car-sharing drivers hitting corners as fast they can for maximum lean.

In this article: activelean, car, i-road, Toyota
All products recommended by Engadget are selected by our editorial team, independent of our parent company. Some of our stories include affiliate links. If you buy something through one of these links, we may earn an affiliate commission.