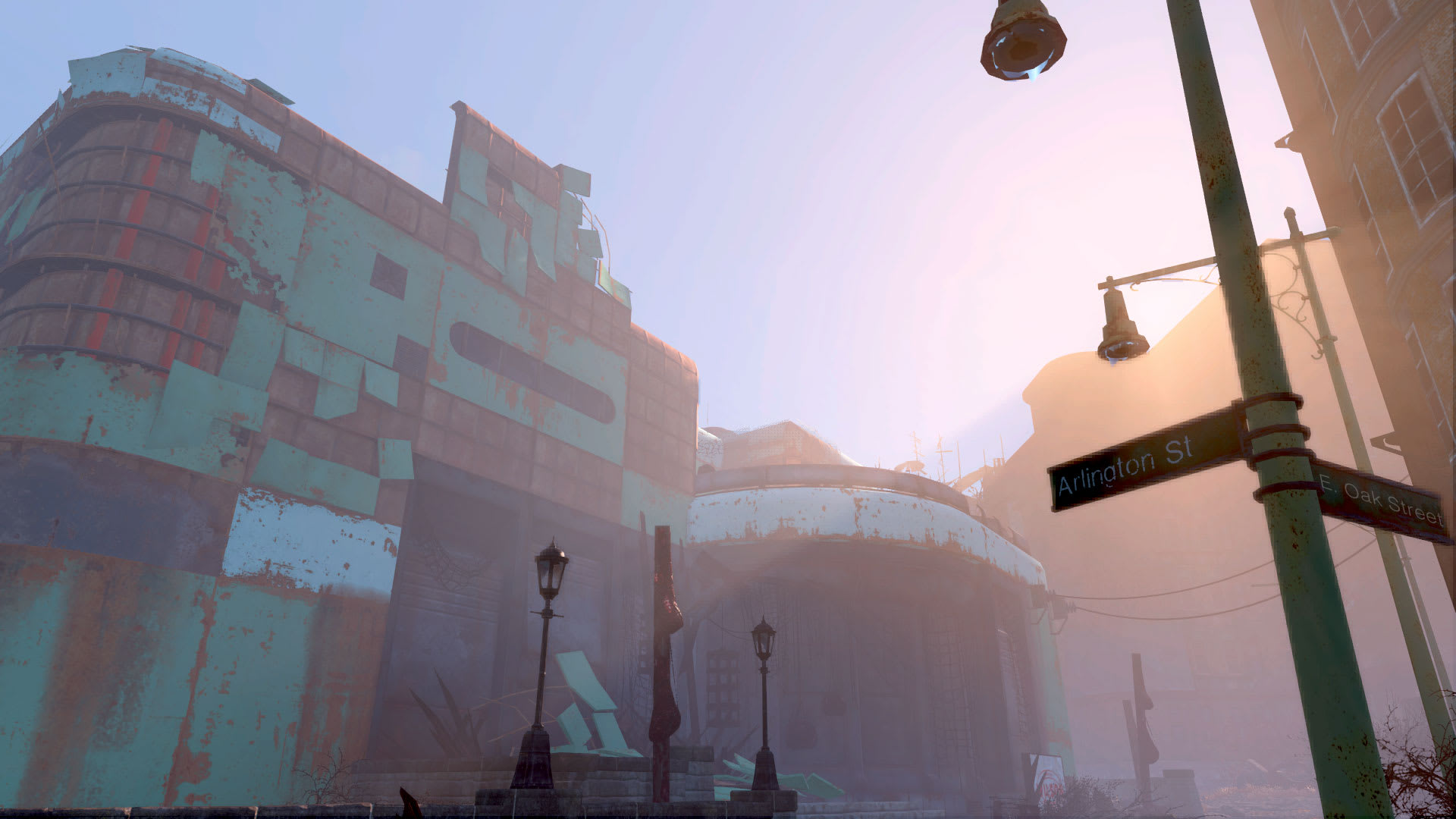 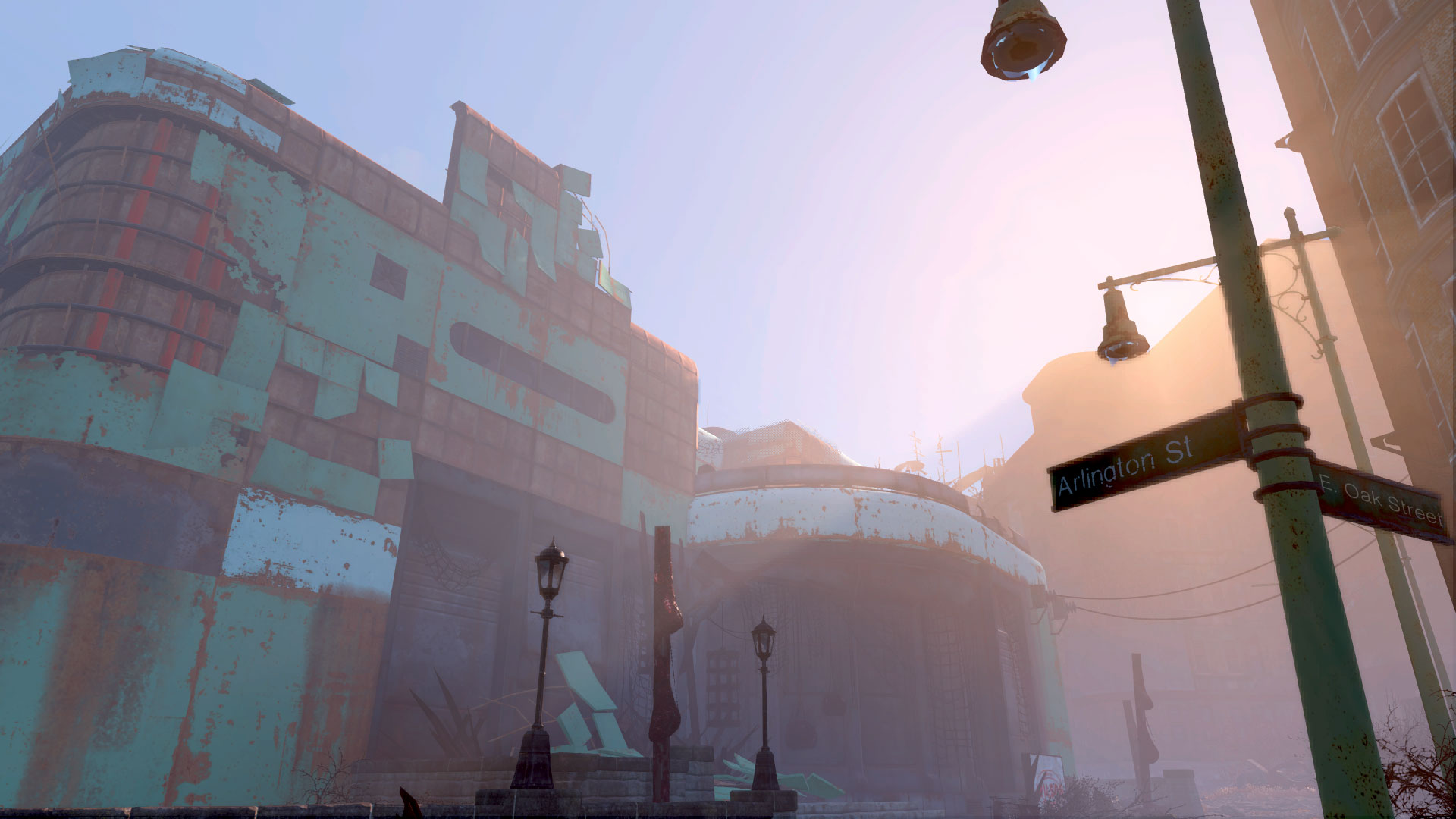 A few weeks ago, a malicious person created a new user account on Engadget (a time-consuming process in its own right) and dropped a massive pair of Fallout 4 spoilers in the comments of my Pip-Boy edition write-up. Why? Because some people just want to destroy the fun of others. I absentmindedly read these "comments" and was bummed out because I thought the game I'd been waiting for since 2009 had been ruined. As it turns out, that wasn't the case.

For the most part, Fallout 4 takes a hands-off approach to how you play. There are scripted events at the outset that everyone will experience in the same order, but once you exit the titular fallout shelter, you're on your own to do as you please. The game world is gigantic and littered with destroyed buildings occupied by enemies -- much like the caves and dungeons you'd find in developer Bethesda Softworks' fantasy series, The Elder Scrolls. Working your way through these locations gives the game a loose structure: Clear out a gaggle of raiders or super mutants, and then retrieve a new weapon or other valuable gear as a reward for not abandoning hope and leaving the building. The promise of a piece of highly effective chest armor is only one reason to trudge through seemingly insurmountable odds, though.

In Fallout 4, every location tells a story; something I discovered while exploring the Wilson Atomatoys Corporate HQ. It started out unassumingly enough: I was on my way to the town of Goodneighbor when I noticed a pair of super mutants on the roof of a sea-green building up ahead. I took them out with a few well-thrown Molotov cocktails and made my way inside, continuing to blast the green ogres from room to room. It's when I stopped to check the computer terminals littered about, that a tale of heartbreak emerged. 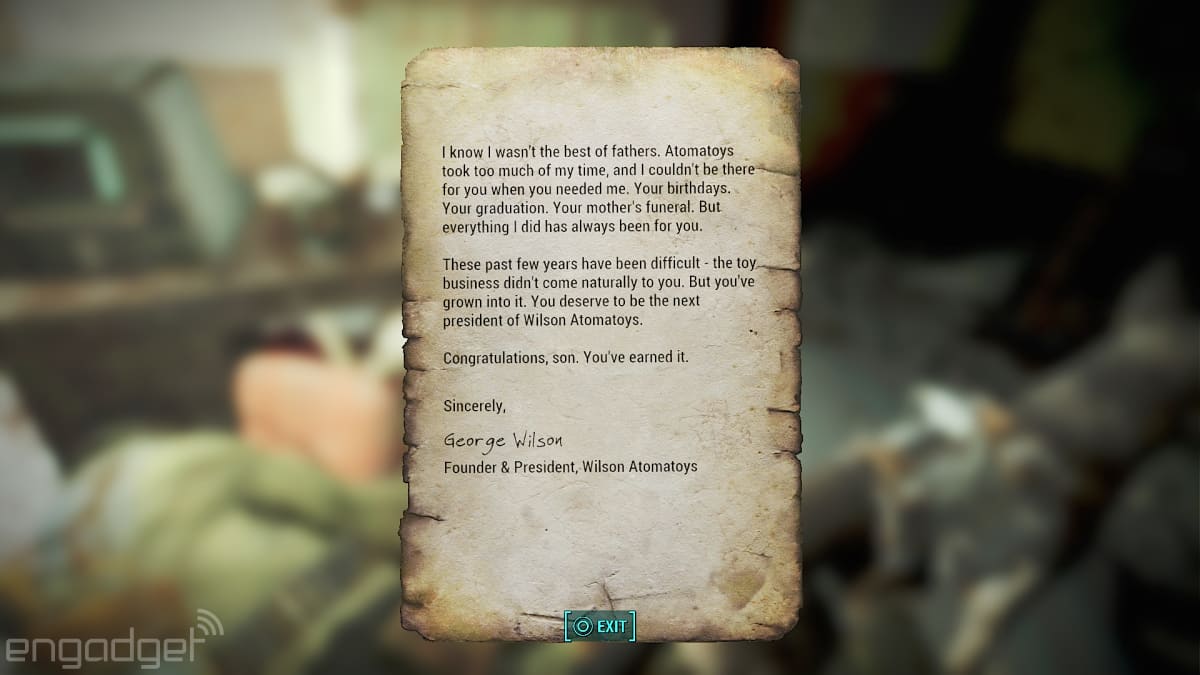 The letter that set everything into motion at Wilson Atomatoys.

Each one had the same repeated memo about an engineer no longer being an employee with the company. I didn't really think anything of it, but the further I got into the building, the more this engineer's story revealed itself: Atomatoys' CEO had recently passed the torch to his lazy son as a gift. At first, all I found were messages from the new boss' point of view, justifying why the company's director of product development, Arlen Glass, had been terminated. "He called me out in front of the board, I had to fire him!" one memo reads.

The truth, however, slowly emerged.

Glass had been working day and night alone to design a new model of the company's "Giddyup Buttercup" pseudo rocking horse toy; profits were down, and the new model was supposed to help bring the firm into the black. Unlike before, Glass didn't have the elder CEO to help him brainstorm or work on it in any way; the son was cancelling appointments with Glass to broker a top-secret military contract for the factory instead. Research and development wasn't going well, either: One journal entry describes a prototype kicking holes in the test-lab's floor.

In Fallout 4, every location tells a story.

In fact, Glass had been so busy with R&D that he had to set reminders to call his daughter at bedtime -- the little girl had left a voicemail saying she missed him and asked when he'd be coming home. He missed her dance recital because of a late night at the office watching paint dry on prototypes. "I'll make it up to her once this is all over," the journal reads. He even used her name, Marlene, as his terminal password -- a sign of how much she meant to him. It's a cruel bit of irony: His own daughter's childhood is passing by while he makes toys for other children around the world.

Deeper into the building, an activity log on the security desk's computer notes Glass being escorted off the premises multiple times after he was fired. On the last day, there's a time-out error. It's here that I started noticing skeletons scattered throughout the offices. In the elevator, one's laying on the floor contorted into the shape of a broken "O," heel almost touching skull; another nearby was clutching a sniper rifle. I couldn't find anymore terminals detailing what'd happened to Glass, but it wasn't hard to piece the sobering story together myself. Glass had gone postal after being unfairly dismissed by the CEO who refused to work with him. The bones littered about the office belonged to Wilson Atomatoys' employees.

Sure, the missile launcher I got from a steamer trunk after clearing the building was a killer reward, but that wasn't what drove me to endure the dilapidated office maze. I'd wanted to know more about Glass and discover the mystery of what led him to the brink of insanity.

Every skeleton tells a story. It's why I wanted to be a paleontologist as a kid and dig up dinosaur bones. Those dreams never materialized, so video games are the closest I'm going to get to examining the past, and unearthing the mysteries of the worlds I'm inhabiting. In Fallout 4, the nuclear-bomb-bleached remains of buildings are my tombs to explore. The main quest is but one story out of hundreds, if not thousands hidden among the game's irradiated Boston. So having it spoiled wasn't as big of a deal as I'd initially thought. In fact, if it hadn't been ruined for me, maybe I'd never have discovered the tragedy of Arlen Glass.

In this article: bethesdasoftworks, fallout, fallout4, gaming, hd, hdpostcross, pc, pcgaming, playstation, playstation4, xbox, xboxone
All products recommended by Engadget are selected by our editorial team, independent of our parent company. Some of our stories include affiliate links. If you buy something through one of these links, we may earn an affiliate commission.