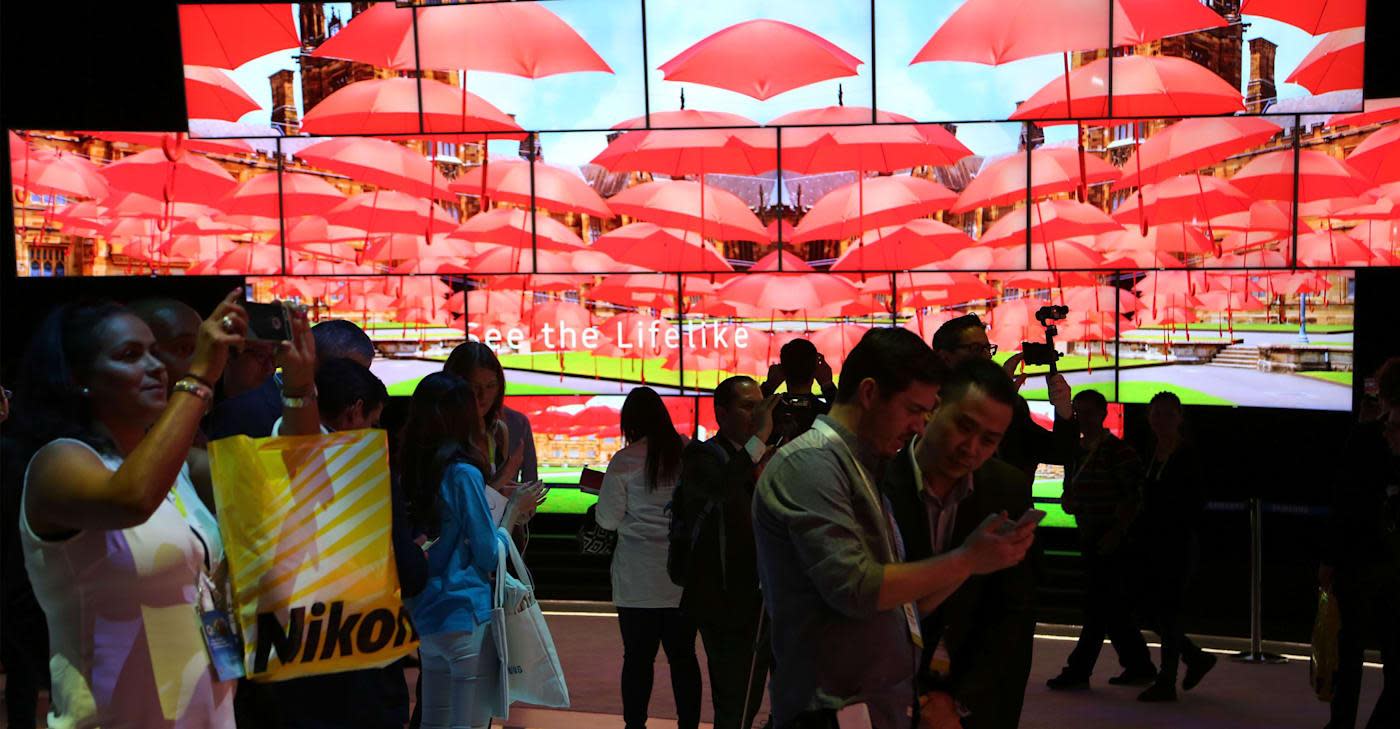 Filled with TVs, CES once was like the world's most ridiculous Best Buy. This year? Think Radio Shack.

Where are the TVs? In my ten years of attending CES I've never had to ask this question, and to be fair, this year they were still front and center in a few booths. But Sony pushed TVs and projectors to the fringe of its spacious CES booth (ceding space for headphones and... turntables?) while Panasonic could only spare a couple of tables for the latest Ultra HD TVs.

In the same space where Darth Vader stood in front of dozens of flat panels to announce a Star Wars Blu-ray, now Spartan Race athletes wearing action cameras took on obstacles, and electric scooters showed off fast charging. Instead of riding high as the primary electronics device on show, TVs, set-top boxes and Blu-ray players are settling in with wearables, VR, drones and the rest as just another thing that look to your phone for advice. Sure, LG and Samsung are still locked in a battle of flat-panel supremacy, showing off beautiful but unnecessary 98-inch 8K screens. And neither one is going quietly into that post-TV goodnight: LG's array of OLEDs are still stunning and webOS 3.0 seems like a good idea. As an alternative, Samsung thinks inside the TV is a great place for its smart home Hub devices to live, and who knows -- that might be enough to make its flat panels stand out. But I was struck mostly by what I didn't see, especially from these two big players.They had plenty to say about 4K, but LG didn't even bring an Ultra HD Blu-ray player while Samsung shoved its $399 box into a hole in the wall. The message is clear: The movies look better, sound better (and region coding is dead!), but there's not much else to say.

One company that had plenty to say was Netflix. By delivering access to 130 new countries on the show's second day, it showed why it's such a great friend to this rollout of new TV and home theater tech, and also a foe. Now that Netflix is in nearly every country, when TV makers add a feature like 4K or HDR, with a flip of a switch Netflix can supply content that's optimized for it. The only problem? Netflix doesn't just stop at the TV screen. It will stream to your computer, your tablet or your phone just as well. Want to launch a movie on your phone, then cast it to the TV without ever touching the remote? Netflix has your back, and it doesn't care which screen you're watching on. The looming question is why TVs must have Netflix or any app built-in. From webOS to Tizen to Roku to Android TV to Firefox OS, none of the embedded smart TV setups showed much that demanded picking one over the other. For years, people have asked for a "dumb" screen with all the high-end picture quality and processing, but nothing else. No apps, no operating system, no UI-changing updates after 6-, 12- or 18-months, no invasive advertising programs and no confusingly designed remote controls. That's how TVs used to work, and there's no reason why they couldn't again.

I don't think TVs would get any cheaper for dropping these items, but in the eyes of many they would be better. Sooner or later, some company will need to do something different to create space from the competition, and that's one thing customers are actually asking for. Whatever's next, TV makers should figure it out before we're all watching simulated 100-inch screens in our VR headsets.