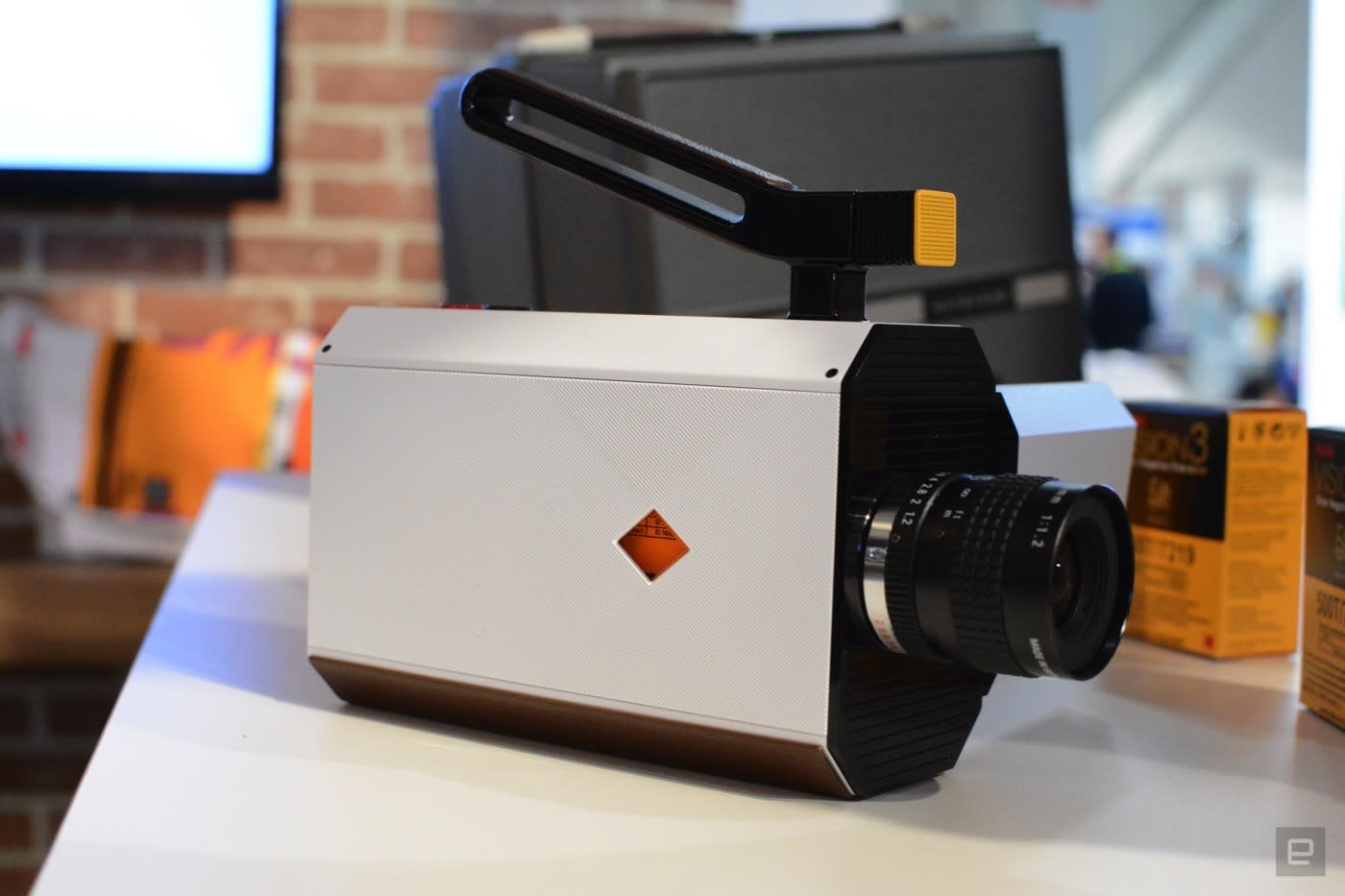 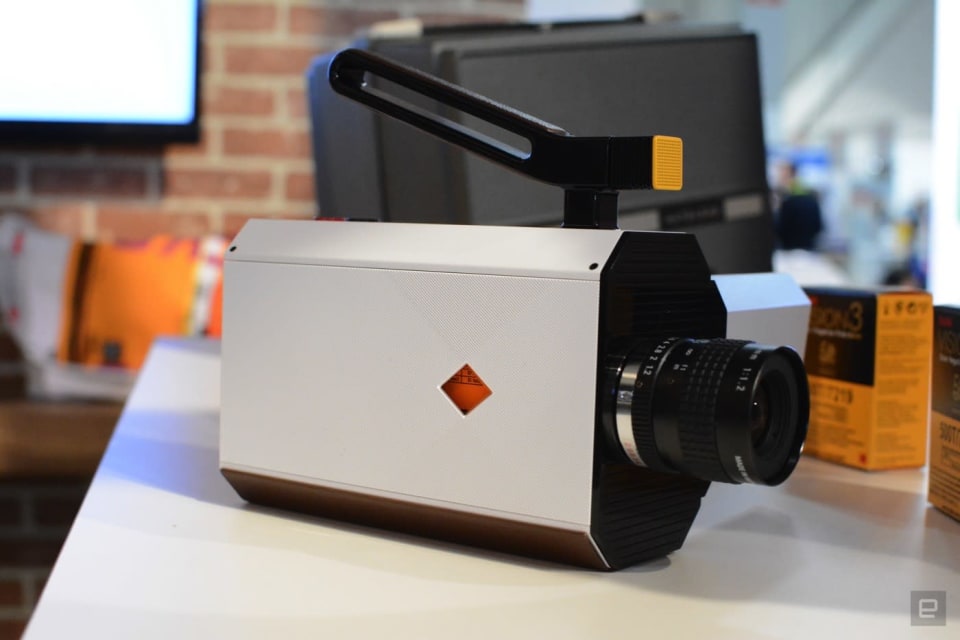 As I squeeze my way through the small gaps between people on the floor at the Consumer Electronics Show in Vegas, the excitement of the crowd is palpable. TVs are rolling up like sheets of paper; robots are swerving in and out of booths and speakers are shapeshifting.

But there's something different about the buzz around Kodak's yellow-colored cubicle. The bright red "K" on the logo that looms overhead instantly evokes a sense of nostalgia that feels misplaced at a show cluttered with snippets of the future. I walk in, past the glass shelves with film rolls on display, to join a group of people huddled around the prototype of Super 8, the company's "new" film camera that made its debut 50 years ago.

When the Super 8 first hit the market, it changed the way people shot and processed film. It quickly led to the rise of amateur home movies as a new genre because it was easy to use and the image quality was better than anything that preceded it. But despite its successful run, the camera slowly went out of production when camcorders started to take over in the '80s. Now, decades later, despite the ubiquity of high quality digital cameras, Kodak wants to bring its beloved analog camera back.

With a redesigned Super 8, the film manufacturer hopes to revive its own brand, which is still shaky after the 2012 bankruptcy, and the art form the camera once supported. But the road to recovery won't be easy. Over the last couple of decades, the digital camera revolution has completely transformed the landscape in the absence of film cameras like the Super 8. Digital filmmaking usurped film as the format of choice and left its ecosystem in shambles. But with blockbusters like Star Wars: The Force Awakens, Jurassic World and The Hateful Eight originating on Kodak's motion picture film, there's a renewed confidence in the revival of the format. And if the excitement over the Super 8 announcement is any indication, it seems evident that the analog film market hasn't flatlined just yet.

I caught up with Jeff Clarke, the CEO of Kodak, and Danielle Atkins, global director of brand identity, to talk about film's big comeback and the revival of the Super 8.

Kodak is the last surviving maker of motion picture film. When you stepped in a couple of years ago, I believe one of your first decisions as the CEO was to keep film production alive. What made you think it could be profitable again?

Jeff Clarke: I don't think you can separate film and Kodak. One of the most valuable things is our brand and film is indelible to that brand. Fuji and Agfa stopped making motion picture film, so when you're the last maker of an art medium, I think you have a deep responsibility as a company and you have to take that very seriously.

We went out and met artists, Hollywood studios and filmmakers and formed a coalition where they committed to buy film for motion pictures for the last couple of years. That resulted in 90 feature movies from Star Wars, Mission Impossible to Spectre. Film is also important for Kodak's industrial business: We make touchscreen sensors for tablets and other devices and that uses film as a substrate, which is very different from what you see in current technologies.

"When you're the last maker of an art medium, I think you have a deep responsibility as a company and you have to take that very seriously." - Jeff Clarke

[Beyond that] we've seen what's happened to vinyl and the maker market in terms of people wanting to be more analog. It's not necessarily about digital fatigue, although there is some of that. But it's that the original script of "analog vs digital" where the winner takes all isn't true. The fact is there's a place for both. We think there's a real market and film can be profitable again.

What is it about film that makes that a possibility?

J: Humans are analog. Organic food is coming back as opposed to processed food. Oculus is not going to replace a nature hike. In the case of motion picture and photography, there's a sense that we need more than just one format. There's more information in film, there are more grains, it's a photochemical process and because of that it looks different -- some people think it looks better, same or worse, but that difference is what is important.

How did you decide on the new design for the Super 8? And what are the highlights?

Danielle Atkins: It's the first we've designed as a company and it's a brand new industrial design language for us. We've added a top handle [with a leather detail] and we've got a digital viewfinder. With the old camera, you didn't really see what you were choosing and you had roughly three minutes of film to spend, depending on the shutter speed. People said you really have to be in the moment with film, you have to be present and you have to edit in your mind while you're shooting the piece. The LCD screen will allow you to see what you're going to shoot before you hit the run button. But you're recording to film so you're still in that moment.

We worked with Yves Behar of Fuseproject. We had a couple of options but we gravitated to this one because it's an octagon with eight sides. We also wanted to bring back Kodak's bold product and industrial design, reference that but bring a new identity to it. So one side feels almost very retro and you get the feeling it was made in the '60s, but when you spin it over it's contemporary. What about the ecosystem needed to support the analog camera? The lack of places that can process film has been one of the biggest challenges for anyone trying to shoot on film.

D: We're bringing back Kodak consumer products, so we're building a whole package to make it as easy as possible. You buy the camera and the film, shoot it, ship it in an old school yellow envelope, we process it, scan it in 4K and upload it. It's the way Hollywood operates now. They scan to digital. We also send the film back to you in post. So you have the option to [exhibit your work on film] or you can choose to edit the traditional way, too. There's a beauty to projecting film. But, initially we want to make it as accessible as possible. We want to get a whole new generation of filmmakers excited. Providing a digital file and sending the film back is the best of both worlds.

"In New York, the last [film] processing lab did close down. We worked with Alpha to put a mobile lab in place so movies could be shot in [the city] again. Now we're working on putting a permanent lab back in place." - Jeff Clarke

J: The ecosystem is critical. Historically the industry was so big that the ecosystem took care of itself, there was a lot of profitability in processing film. Now we realize we need to do that extra bit to make sure that part of the ecosystem is there. So we're doing a significant amount of work for it. For motion picture, fortunately, LA is well positioned. There's FotoKem, one of the best processing labs of motion picture film in the world, and Panavision has a wide variety of film cameras that are available. But in New York, the last [film] processing lab did close down. We worked with Alpha to put a mobile lab in place so movies could be shot in [the city] again. Now we're working on putting a permanent lab back in place.

What about movie theaters?

J: There are many experiences with film. Let's compare the two biggest movies right now – Star Wars and The Hateful Eight. Star Wars originated by JJ Abrams on Kodak film but it was projected in theaters only digitally. On the other hand, The Hateful Eight was shot on 70mm and Tarantino and Weinstein Company made sure there were at least 70 different theaters that would show the film in the way it was intended. You could see the movie earlier if it was on film and it was a modestly different cut too. Christopher Nolan did the same thing with Interstellar so you could have a premiere experience. We need to continue to work with theater chains so they're willing to maintain projection capabilities and have projectionists that are trained. Filmmakers who already have the means to shoot on film and the clout to exhibit it the way they want can certainly push the analog culture forward once again. But outside of Hollywood, who do you see adopting the Super 8?

J: Our primary market will be students. There are lots of film schools around the world that aren't teaching film anymore, and the ones that do have to maintain old cameras from eBay. The new generation that's coming up, they're the aficionados, but they can't afford 35mm or 70mm and they can't afford a thousand feet of rolls.

D: I would love to see Viners using it -- there's something about the shortness of it that could be interesting to use it in the digital space. That's broadly how people are sharing content these days. But there's a depth to the actual origination in this medium that you don't get if you shoot and then apply a filter in digital. We live in a world that's so immediate, but there's magic to the waiting and the processing in a dark room. I hear from people that they miss that contact sheet that you would get back. My kids' generation hasn't had that kind of magic. There's warmth to analog, but bringing digital enhancement makes it easier for them.

What does this comeback mean for Kodak?

J: What this shows is that Kodak is still in the consumer business. After the bankruptcy, many people thought the company would only be in the printing space. Ninety percent of our revenue comes from print and technologies related to print. We think that's great business, but the consumer aspect is a large part of what our brand is worth. A lot of companies use our brand for products that we don't make. So this is a signal for people that we're back! 14
In this article: AnalogCamera, AnalogFilm, cameras, ces2016, culture, entertainment, film, kodak, kodaksuper8, Super8
All products recommended by Engadget are selected by our editorial team, independent of our parent company. Some of our stories include affiliate links. If you buy something through one of these links, we may earn an affiliate commission.