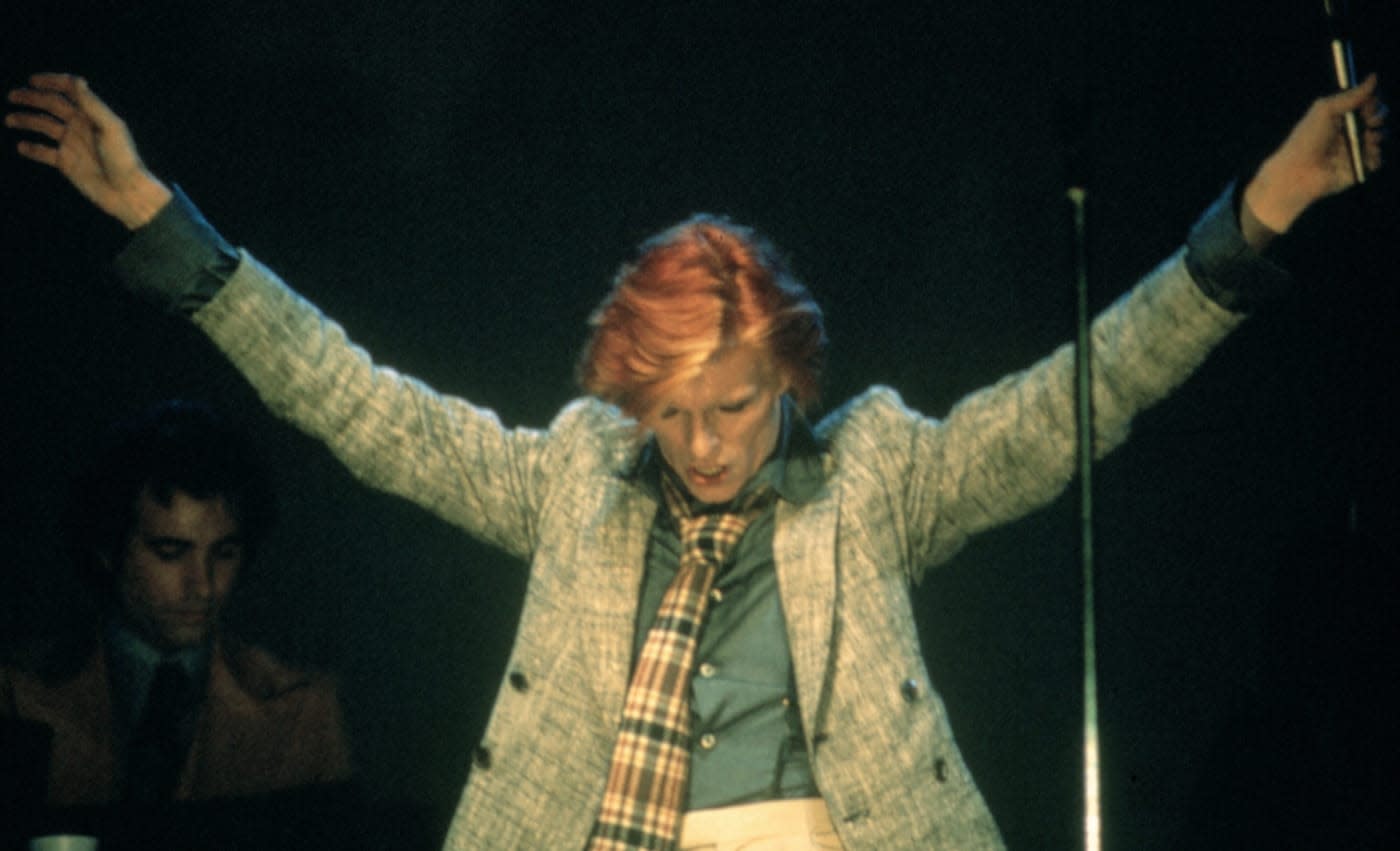 David Bowie passed away yesterday following an 18-month battle with cancer. The news was confirmed through his official website, his publicist and son Duncan Jones, who tweeted, "Very sorry and sad to say it's true." Though he only lived to 69, it's hard to think of an artist who had a larger impact on pop culture. Bowie was a gifted and prolific songwriter who created iconic albums like Diamond Dogs, Heroes and Let's Dance. He was also a fashion icon, actor, painter, producer, Broadway star and performer who invented iconic alter-egos like Ziggie Stardust, the Thin White Duke and Major Tom.

Very sorry and sad to say it's true. I'll be offline for a while. Love to all. pic.twitter.com/Kh2fq3tf9m

Bowie had a huge impact on geek and sci-fi culture. His first hit, Space Oddity, was released shortly after 2001: A Space Oddysey and the same month that Neil Armstrong walked on the moon. Many of his music production techniques were also highly innovative. Bowie collaborated with Brian Eno on the album Low, creating new sounds with Eno's AKS synthesizer and an Eventide Harmonizer. He was also an accomplished actor who starred in the groundbreaking sci-fi film The Man Who Fell to Earth, along with fantasy classics The Hunger and Labyrinth.

Suffice to say, David Bowie had a big impact on a number of us here at Engadget. The following are some tributes, anecdotes and memories of how his work affected us.

Calling David Bowie a musician or pop star is like calling Everest a mountain. His art rose above everything and glistened in a sunlight too powerful and air too thin for most to handle. And yet, that voice never spoke down to us from its position at the very edge of the earth.

Instead it welcomed everyone into his world of aliens, space and sometimes fear. It spoke to the odd. The kids that couldn't figure out where they belonged. The adults lost in a sea of grey. The musicians, the artists, the dancers, the writers. When we needed someone, when we needed solace, we turned to Bowie or one of his many disciples: Lou Reed, Morrissey, The New York Dolls, Nine Inch Nails and on and on and on.

I keep thinking this is an elaborate piece of performance art. Bowie will rise again. Bowie will lead us out the depression of his own passing. It's tough to imagine something as human, as earthly, as cancer taking him from us. He was our alien crooner. Can aliens even get cancer?

But he will lead us out of the sadness that's surrounded his passing. His voice will tell us it's going to be alright. His music will be our solace. The "Thin White Duke," "Ziggy Stardust," "Aladdin Sane" even the "Goblin King" will be blasting out of speakers and headphones for days, weeks, years, millennia. I'm devastated today. But tomorrow and the next day and the next and so on, I'll be besides myself with happiness because I'm here and David Bowie made that possible.

I think I played Suffragette City on a continuous loop for about a month when I was 17, disaffected and usually high. I also wore the grooves through Space Oddity, Ashes to Ashes and China Girl. Needless to say, I was a huge fan of David Bowie the musician, and that's never changed.

I wasn't that knowledgeable about the depth of his cultural impact, though, until I saw the David Bowie Is retrospective at the Philharmonie museum in Paris last May (it's currently at the Groninger Museum in The Netherlands). Going through the exhibition, you realize how Bowie had an uncanny ability to predict and then define pop culture. The sheer quantity of his creative output was also mind-blowing. Through each of his phases -- Ziggy, Major Tom, Alladin Sane, etc. -- there wasn't just albums, but highly inventive costumes, artwork, music videos, books and more. Bowie was very hands-on with all of those side-projects.

He didn't do it all alone, of course. Bowie liked collaborating with choreographers, designers and artists, both well-known and avant garde. That includes a mime (Lindsay Kemp), Japanese fashion designer (Kansai Yamamoto) and fellow rockers Freddie Mercury, Mick Jagger and John Lennon. At the end of the exhibition, we were marveling at how different his phases were, and how inventive he was in each. As the Philharmonie put it, "He never bows to the expectations of the record company or sticks to a winning formula. For Bowie, that's the moment to move on to something else."

I came late to David Bowie fandom -- by the time I was old enough to appreciate him, I'd missed his Ziggy Stardust days and the '80s pop era. I'd learn to like those, too, but for me Bowie was defined by the '90s and how much he embraced technology.

Remember how Bowie was once again the coolest thing because of the drum-and-bass and industrial music in Earthling? How he even found his way into a video game, Omikron: The Nomad Soul? This was a man who refused to settle down as his hair turned gray, who wanted to push technological boundaries rather than retreat to what he knew. It's fitting that his last album, Blackstar, was an out-there experiment uniting electronic music with avant garde jazz and rock. And it was a pretty damn good experiment, too.

I don't want to beatify him. Everyone knows Bowie's troubles with drugs, his fractured family life and the occasional album that didn't blow everyone away. But it's rare that you get an artist of any kind who stays vital and relevant right up to the very end. I'll miss you, David.

Even though I grew up decades after the launch of "Space Oddity," Ziggy Stardust or even "Under Pressure," David Bowie influenced my young life in incredible, unforgettable ways. I can't hear his voice without soaring into a galaxy of memories: I'm in fifth grade and I hear the name, "David Bowie," for the first time. It's uttered in reverence by a friend who is infinitely ahead of her time (and continues to be today).

I'm in middle school and it's nighttime. I'm sitting in a car outside of an apartment complex with my dad, the volume cranked up as the tinny radio finishes playing "Space Oddity." Bowie croons, Ground control to Major Tom / Commencing countdown, engines on, and my young mind is blown. My dad's name is Tom. Somehow, this song is about him. It's a warm and heartbreaking moment, perhaps the first time I realize that, yes, even my dad is going to die one day. But it's not morbid; it's beautiful.

I'm a teenager, watching Jonathan Rhys Meyers make out with Ewan McGregor in Velvet Goldmine, a movie that parallels Bowie's life and romances to such a degree that he's threatened to sue the production company. I fall in love with the unabashed, unapologetic openness of the glittering, gaunt man that's modeled after Bowie. I fall in love with parts of myself that I'm just beginning to understand.

There are plenty of smaller memories scattered throughout my personal Bowie galaxy -- driving with friends and singing "Under Pressure" at the top of our lungs; dancing on my own to his later work with Trent Reznor; watching him play a convincing Nikola Tesla in The Prestige; devouring his new, gorgeous YouTube music videos. The best part is that I know this galaxy will never run out of stars. Though the man himself has left Earth, Bowie's art will continue to shape my life in small, welcomed ways.

I must admit that I'm not as familiar with David Bowie's works as some of my fellow editors, but that doesn't mean I haven't been felt his massive influence on music on popular culture. Anyone who knows even a little bit about music history knows that Bowie's work has influenced hosts of artists across a huge variety of genres and decades. As I was growing up in the '90s and becoming deeply obsessed with music, two albums that blew my young mind away and remain favorites to this day are U2's Achtung and Nine Inch Nails' The Downward Spiral -- two albums that simply wouldn't exist without Bowie.

U2 visited Berlin in 1990 and 1991 to record Achtung Baby in the same studio that Bowie recorded his famous "Berlin Trilogy" of records (Low, "Heroes" and Lodger)in the late '70s. It's no coincidence that the band had the same producer on board, Brian Eno, the man behind some of U2 and Bowie's most famed work. Say what you will about U2 now, but the band had a 15-year period where it released numerous all-time classic albums, reinventing its sound several times -- that thirst for reinvention was directly influenced by Bowie, and the band knew Eno was a producer who could get them there.

NIN mastermind Trent Reznor's appreciation for David Bowie is well-known -- NIN did a co-headlining tour with Bowie in 1995 in support of The Downward Spiral. That would have been my first concert, but for a variety of teenage reasons it didn't come together. It's a real shame, because I've since seen plenty of videos of Bowie's performances on that tour as well as his onstage collaborations with Reznor on "Reptile" and a reworked version of "Hurt," and all those performances were fascinating.

I've dabbled in Bowie since, but for whatever reason the influence he had on some of my favorite albums wasn't enough to push me fully into his world. I'm sad I didn't appreciate him as much while he was alive -- but fortunately, he's left a huge mark on the music world and dozens of albums to explore. Now if you'll excuse me, I think I'm going to spin up Low.

I came to know David Bowie through the works of others. Growing up a '90s kid, it was impossible to turn the radio on and not hear Nirvana's unplugged cover of "The Man Who Sold the World" at least once a day. And then years after its release, I discovered "I'm Afraid of Americans," his song with friend Trent Reznor, while I was in high school.

It was an impromptu Rock Band party that's perhaps my most vivid memory of Bowie, though. Friends and I were cramped into a small living room, holding plastic instruments and rocking out to "Suffragette City" in front of a modest Samsung LCD TV. I'm pretty sure I mangled the song's drum parts, but when someone belted out Wham bam thank you, ma'am! it was hard to not smile despite my inability to keep rhythm.

He was my favorite artist's favorite artist, and albums that've had such a huge impact on my life (specifically, Nine Inch Nails' The Fragile and Reznor's soundtrack work) almost assuredly wouldn't have happened were it not for the trails Bowie blazed in his career. Even now, in the wake of his passing, some of my favorite artists are showcasing their love and respect for the man, and I'm discovering even more about how smart and prescient he was. It's things like that which make me forever grateful for the indelible impact he made on music and culture. Thank you, Mr. Bowie.

In this article: art, bowie, culture, davidbowie, entertainment, music, rip, sciencefiction
All products recommended by Engadget are selected by our editorial team, independent of our parent company. Some of our stories include affiliate links. If you buy something through one of these links, we may earn an affiliate commission.