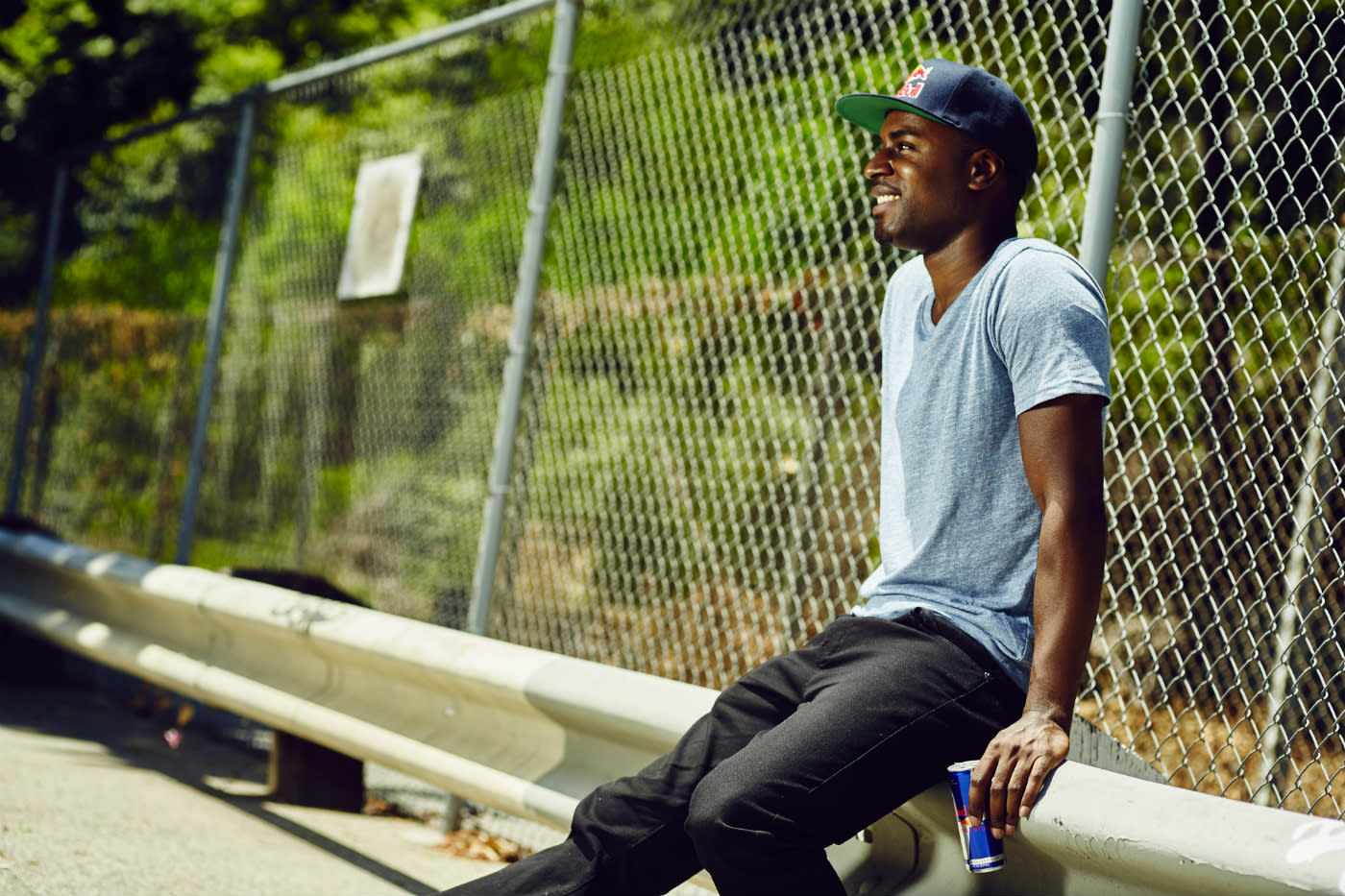 The fabulous life of a professional 'Street Fighter' player

Darryl Lewis stows his luggage in the plane's overhead bin and settles into his seat, ready for another takeoff, another trip for work. He's seated next to an older man who's flying with his family. Eventually, the man turns to Lewis and asks him a standard question from the handbook of airplane small talk:

"What are you traveling for?"

Lewis pauses. He's the professional Ultra Street Fighter 4 player known as "Snake Eyez," and he's on his way to a competition where he could win thousands of dollars for playing a video game better than anyone else in the room. Will this guy get it? Does he even know what video games are or how big the industry is? Has he heard of eSports? Will he laugh? Oh, well. There's only one way to find out.

The man smiles. "Ah! Vidyagames." It's clear that he has no idea what Lewis is talking about, but at least he isn't laughing.

This is a fairly standard experience for Lewis, especially since the life of a professional, high-profile video game player involves a fair amount of traveling, whether for practice, tournaments or promotional events. Lewis has honed his response over the years, and usually, he simply tells strangers that he's "going to a convention." It sounds respectable, and it's not too far from the truth.

However, the truth is much more exciting: Lewis is a rock star in the world of competitive fighting games. He's one of the top professional Ultra Street Fighter 4 players in the world, securing numerous championship titles since 2010 and recently locking down a sponsorship from Red Bull that includes a video series all about his life as a pro. He's widely regarded as the best Zangief player on the planet, able to maneuver the game's hulking, tank-like character in strategic and deadly ways.

"I like his style," Lewis says. "I like the way he walks. The main thing I like about him, though, is that a lot of players are scared as hell of him."

Lewis, 27, has been competitive his entire life. He grew up playing video games and basketball but was a relative latecomer to professional gaming. In high school, his friends -- some of whom are nearly pro themselves -- loved going to arcades to play Street Fighter 2, but Lewis didn't care for the crowds.

"I was always a homebody," he says. "I waited for my friends to come over to my house and play against me. I always wanted to see who could come to my house and give me a challenge." Lewis entered the professional gaming scene around 2006, though it wasn't with Street Fighter. His first competition was a team-based Halo 2 tournament, and it effectively changed his life. Suddenly, he realized there was a community of other competitive video game players out in the wild. He wasn't alone.

"I had no idea that an environment like that existed," Lewis says. "When I first saw it, I was like, 'Wow, it's a bunch of people like me.'"

Lewis dropped out of the Halo 2 scene after that tournament, partially because he didn't enjoy playing with a team. That's his competitive side taking over; he doesn't want to just be the best, he wants to prove his skill, again and again, preferably on a big stage bathed in lights. It's difficult to achieve that level of personal fulfillment within a squad of other players. So he turned to Street Fighter, a one-on-one fighting-game franchise.

Lewis showed up at the Evolution Championship Series in 2010 as a newcomer -- and he won. Playing under the name "Snake Eyez," he came in first place in the Super Street Fighter 2 HD Remix championship, shocking many fighting-game fans and igniting his own career.

More importantly, the win convinced his mom that professional gaming was a valid endeavor.

"It wasn't until I went to Evo and won that she was like, 'OK. I can see you going somewhere with this,'" Lewis says. "And I'm like, 'Yeah, this is my passion, this is what I want to do, and there's actually a big scene for this.' There's actually a professional scene for this kind of thing, which is very hard for people who don't really know about video games to acknowledge."

Today, Lewis' mom is his biggest fan, attending tournaments and watching him play on live streams. "She loves it now," he says.

She's not alone. eSports are the entertainment industry's latest hotness. ESPN debuted a dedicated eSports section in January; television network CW plans to broadcast a professional Mortal Kombat X tournament this month; both Activision and EA have launched their own eSports businesses; and Amazon paid nearly $1 billion in 2014 for Twitch, a major player in live-streaming eSports.

For Lewis, professional gaming is a satisfying career that allows him to travel the globe, meet gaming superstars and satiate his competitive spirit. He played Street Fighter with series producer Yoshinori Ono in San Francisco about a month ago, and the two talked about the franchise's origins and its future with Street Fighter 5. Red Bull sent Lewis to Japan for three weeks last year to train with the world's best players and film part of his documentary series, Cultivation: House of Snake Eyez.

"I came back out here and everyone played me, and they were just like, 'Man, what the hell? How did you get this good?'" Lewis says.

The professional Street Fighter world is currently preparing for the release of Street Fighter 5 on February 16th. Lewis has been playing the beta and he's lucky; his favorite character, Zangief, is in the new game, while other characters have been completely removed. Other pros will have to learn brand-new moves before the 2016 tournaments kick off. "I'll probably have a huge advantage in that field," Lewis says.

But, there's still plenty for him to do: Lewis practices as much as he can, plus he streams and manages his social media presence nearly every day.

"I have to have a presence out there," he says. "I can't just play and be good at the game. That actually takes up more time than playing sometimes."

Lewis makes most of his money from sponsorships and tournaments, but he isn't kidding about the importance of live-streaming to a professional player, or even a casually competitive one. He knows a few players who could go pro, but they choose to make a living live-streaming instead. Their rationale? They can make more money streaming than winning first place at some tournaments.

For reference, Evo paid out roughly $33,000 to the winner of the Ultra Street Fighter 4 tournament in 2015, while the Capcom Cup 2016 has a prize pool of $500,000. These two are major competitions, but we're not talking about chump change here.

Indeed, competition is where Lewis shines. It's what he works for; it's why he spends hours practicing with Zangief and other characters. He craves validation. Tournaments are a chance for him to test out the strategies he's perfected at home: backing other players into a corner so they overcompensate and hand Lewis an opening for a big move, or letting his foes come to him, giving them false confidence and setting them up for a surprise grab.

Playing Street Fighter professionally takes strategy, quick reflexes and poise under pressure. The fact that he has to wrangle all of these things while performing for millions of people doesn't faze Lewis. When the game starts, the rest of his world fades away.

"I definitely start to think faster," Lewis says. "My mind starts racing. Everything around me doesn't exist anymore. A lot of players, they get nervous because they're on stage, but for me, I'm tuned in directly to the game. My focus is 100 percent there."

That might be a big part of Lewis' secret to success. After all the hours of training, traveling and tournaments, he still gets lost in the game. He still has fun playing Street Fighter.

"It's amazing," he says. "I get to stream whenever I want, I get to play whatever games I want. I'm definitely living the dream. It doesn't feel real, but it is."