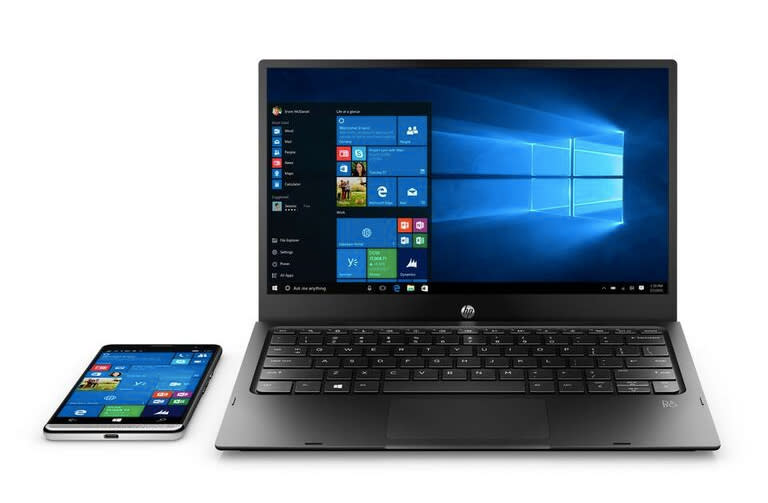 It's been ages (fine, two years) since HP released a smartphone, so surely a device making its debut at Mobile World Congress ought to be special, right? Well, HP's newest mobile -- the Elite X3 -- is special, for a few reasons. First off, it's a Windows Phone in an age where Windows Phone growth has basically stopped. And second, HP is looking at it as a productivity powerhouse, supplementing it with a lapdock that the phone connects to wirelessly. The result? A mostly full-size laptop with all the power of a smartphone. ​ First, the facts. Like plenty of other phones here at the show, the X3 comes loaded with a Snapdragon 820 chipset and 4GB of LPDDR4 RAM, along with 64GB of internal storage. That puts it in the same category as devices like the LG G5, though its dual front-facing speakers (augmented by Bang & Olufsen) could make it a handier media machine. It also sports all the security features your IT department has been clamoring for, two SIM card slots for frequent fliers and a surprisingly nice 5.96-inch Quad HD display.

All told, that's a pretty solid package. And from HP! Who knew? Really, though, it's the productivity angle that's most puzzling. The Elite X3 is meant as a business-only machine, sold in fleets to both tiny and corporate IT departments, and the lapdock (technically the "mobile extender") is a way to turn a phone into a full-blown work machine. The extender is supposed to come with a 48Wh battery and a 12.5-inch diagonal screen, along with a full-size keyboard and trackpad. If you're really itching to hunker down and work, there's a dock, too, which basically just lets you route video from the phone to a bigger display for universal apps.

I got the chance to play briefly with the phone (the lapdock was just a mock-up) and walked away more confused than anything. Would a mobile professional prefer a proper laptop and smartphone every single time? The notion of having productivity accessories orbiting around a smartphone sun is great and all (especially for small IT departments that would rather not have to deal with managing all those assets), but the fact of the matter is, Continuum sometimes doesn't work reliably enough to make any of this feasible. Most of my Continuum experience has been with a Lumia 950 connected straight into a screen with cables — I couldn't get Miracast connectivity to work even with a dongle Microsoft provided, and I'm wondering how many people will experience these same kinds of headaches with HP's wireless lapdock.

That's kind of a shame, too, as the Elite X3 is one of the nicer Windows Phones I've come across. It's not as downright fancy as the NuAns Neo, but it's got the horsepower to make some people reconsider the Windows Phone lifestyle.

In this article: continuum, gear, hands-on, hp, mwc, mwc2016, personal computing, personalcomputing, smartphone, windows, windows10
All products recommended by Engadget are selected by our editorial team, independent of our parent company. Some of our stories include affiliate links. If you buy something through one of these links, we may earn an affiliate commission.