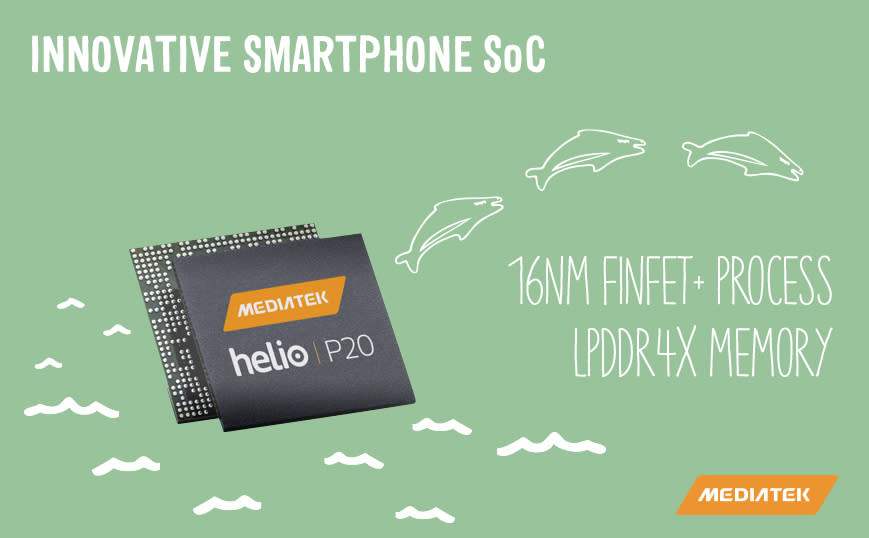 Back in June, MediaTek announced its Helio P10 mobile chipset, which will offer octa-core processing and faster LTE to the masses; today, we know that it'll finally be getting into consumers' hands by way of the Sony Xperia XA. So what's next? The Helio P20, of course. Compared to its predecessor, this new chip -- also featuring eight Cortex-A53 cores and LTE Cat 6 -- is a notable upgrade in terms of power efficiency as it'll be fabricated with a 16nm FinFET+ process instead of the old 28nm. For the same reason, the CPU has been allowed to go beyond the old 2GHz limit to 2.3GHz, and the old Mali-T860 GPU has been switched to ARM's cream-of-the-crop Mali-T880 running at 900MHz. As a bonus, the P20 features the same Imagiq image signal processor as the flagship 10-core X20.

What's also impressive is the fact that the P20 is the world's first SoC known to support the upcoming LPDDR4X memory, which runs on a much lower voltage of 0.6V instead of 1.1V. That's almost a 50 percent drop! However, according to SemiAccurate, we probably won't be seeing LPDDR4X in devices until next year; which is just as well because the P20 won't be shipping to manufacturers until the second half of this year.

In this article: chipset, finfet, finfet+, gear, heliop20, LPDDR4X, mali-t880, malit880, mediatek, mobile, mwc2016, p20, soc
All products recommended by Engadget are selected by our editorial team, independent of our parent company. Some of our stories include affiliate links. If you buy something through one of these links, we may earn an affiliate commission.