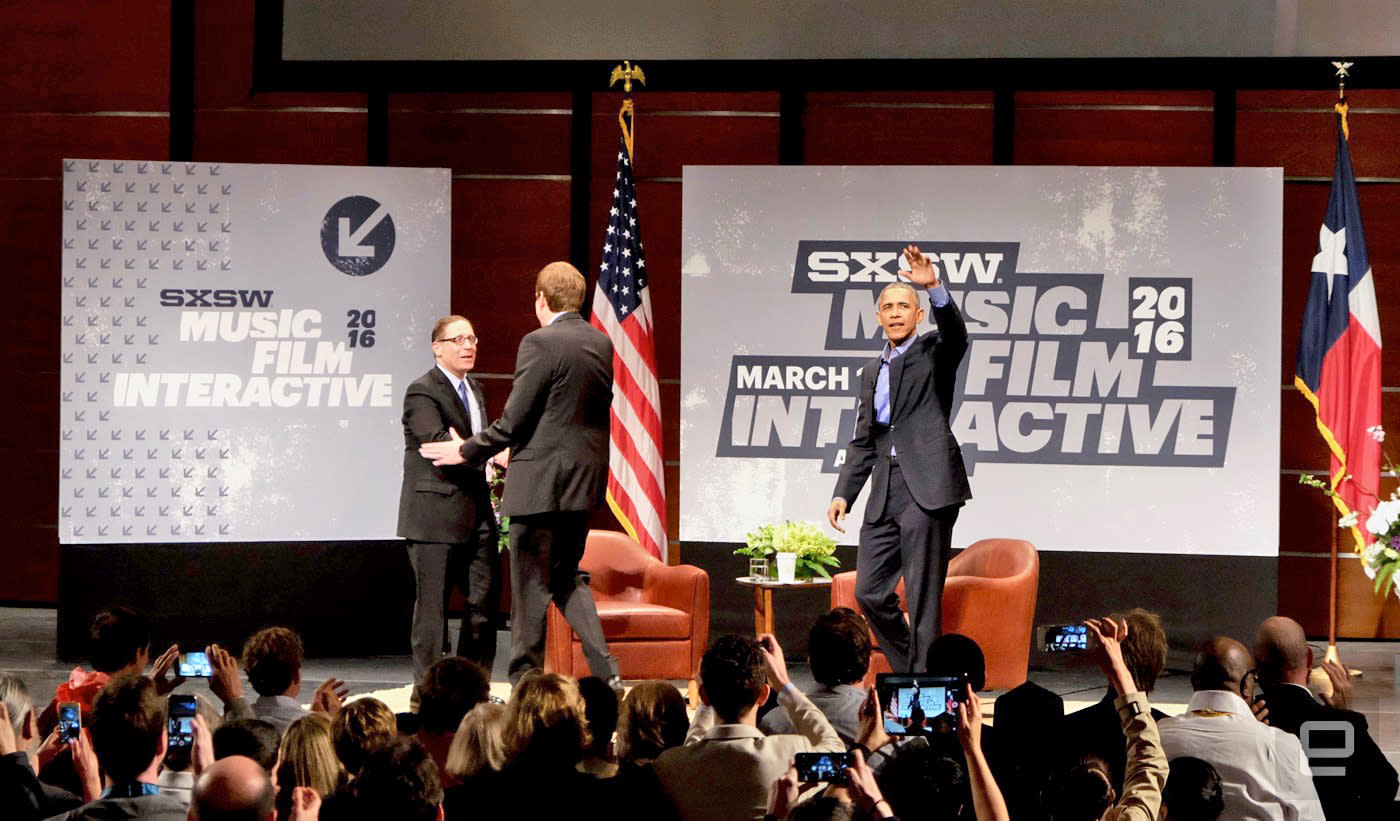 President Obama urges SXSW audience not to be 'absolutists' on encryption

South by Southwest managed to get a pretty good keynote speaker as it kicked things off today: President Obama. The president sat down with Evan Smith, editor-in-chief of The Texas Tribune, for a quick but wide-ranging interview loosely focused on civic engagement in the 21st century. He also spent about ten minutes discussing the ongoing battle between privacy and security as highlighted by the battle between the FBI and Apple. As a practiced politician, Obama avoided coming down too hard on any one side, and he said he wasn't able to discuss the ongoing FBI vs. Apple case at all. But by and large his message was that sacrificing some degree of privacy for the sake of our safety has served the country well for hundreds of years, and he expects we'll figure out a way to do so digitally as well.

"If there is probable cause to think that you have abducted a child, or that you are engaging in a terrorist plot, or you are guilty of some serious crime," the president said, "law enforcement can appear at your doorstep and say 'I have a warrant' and go into your bedroom to rifle through your underwear and see if there's any evidence of wrongdoing." Obama said we've all agreed that this lack of privacy in this specific situation is worth it because it keeps us safe.

"The question we now have to ask is if technologically it is possible to make an impenetrable device or system where the encryption is so strong that there's no key or no door at all," Obama pondered, "how do we apprehend the child pornographer? How do we solve or disrupt a terrorist plot?" It's an argument similar to the one the FBI itself made in a court hearing last week, but Obama went on to note that he definitely sees the concerns that citizens have, given the amount of data stored on their phones.

And it's not just personal data -- Obama noted that all of our infrastructure depends on security against malicious hackers. But ultimately, despite saying he's "way on the civil liberties side of this thing," it seems the president thinks that the government should figure out a way to have access to devices that otherwise have strong encryption.

As to how to balance these things Obama said we'll have to figure out "how do we have encryption as strong as possible, the key as secure as possible and accessible by the smallest pool of people possible, for a subset of issues that we agree is important." From a policy side, it sounds like he thinks we need to clearly outline the specific circumstances in which it's reasonable to go through someone's device -- and also figure out from a technical perspective how we can do that without fear of a backdoor key getting out into the wild.

"I am not interested in overthrowing the values that have made us a great nation for expediency..."

Ultimately, it appears the president has a balanced, realistic view of what'll need to happen going forward in cases like the one we're seeing now. "I am not interested in overthrowing the values that have made us a great nation for expediency," Obama said, "but the dangers are real, maintaining law and order in a civilized society is important, protecting our kids is important, so i'd caution against an absolutist view on this."

He also noted that it's better to figure these things out now, rather than right after "something really bad happens." At that point, he imagines a world in "the politics of this will swing" and Congress will be empowered to push through "sloppy and rushed" legislation. "Then," Obama warned, "we really will have issues with our civil liberties."

In closing, he implored the technology community in the room and watching online to contribute to the debate and lend their skills to figuring out both the technical and political challenges surrounding this issue. "The notion that our data... can be walled off from other trade-offs we make [for security] I believe is incorrect," Obama said. "But we do have to make sure, given the power of the internet and how much of our lives is digital, is that [government access] is narrow and constrained and there's oversight. I'm confident that this is something we can solve, but we need the tech community to help us solve that."

All products recommended by Engadget are selected by our editorial team, independent of our parent company. Some of our stories include affiliate links. If you buy something through one of these links, we may earn an affiliate commission. All prices are correct at the time of publishing.
View All Comments
President Obama urges SXSW audience not to be 'absolutists' on encryption