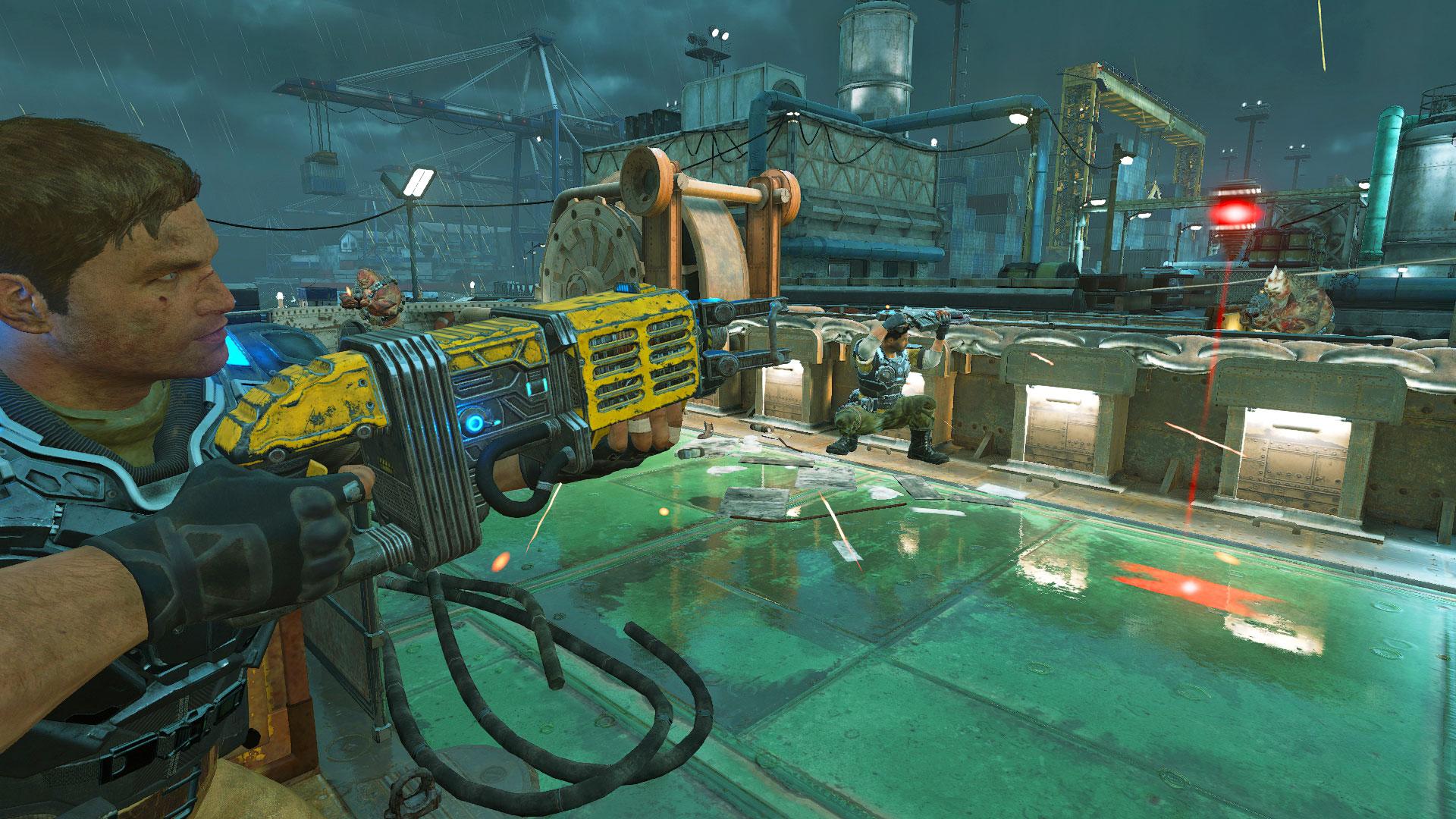 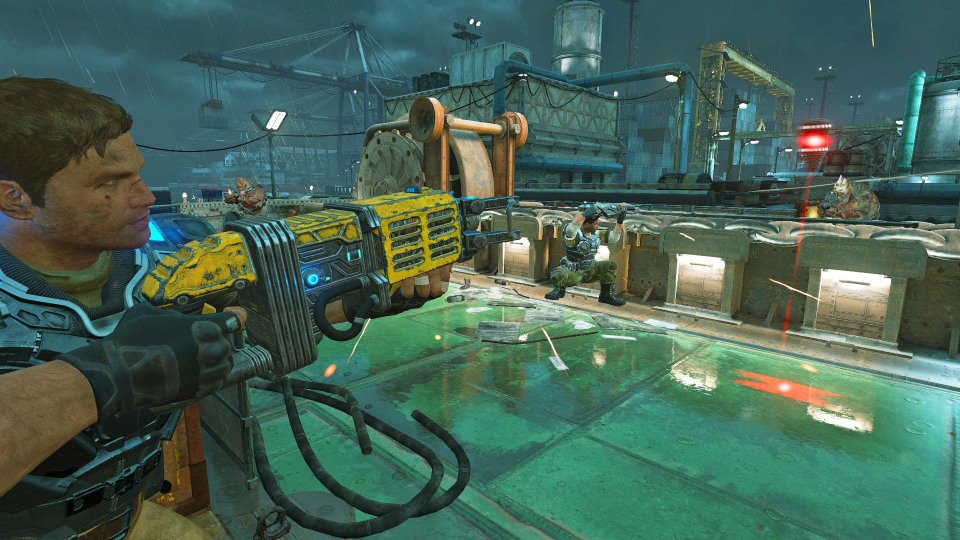 Excluding Halo, Gears of War is Microsoft's biggest multiplayer shooter: For many players, multiplayer is far more important than the main story-based campaign. That's what made Gears of War: Judgement a disappointment for many long-time players. The multiplayer experience was changed enough that avid GoW fans were left a bit cold. As such, developer The Coalition looked at Gears of War 4's multiplayer as an opportunity to make the best GoW experience it could while sticking to the formula that previously had made it so popular.

"Judgement was a big change in how Gears played -- it was basically Gears meets first-person shooter," Rod Fergusson (studio head at The Coalition) told reporters at a Gears of War 4 multiplayer preview event last week. "It had first-person shooter controls, it had faster movement, human-vs.-human combat. It really felt like it was a move away from what was core to Gears of War." For the latest entry in the series, Fergusson decided to "double down" on what's unique to the series rather than chase a trend like making GoW into a first-person shooter. A mantra for the team was "don't change yourself so much that you lose the people who already love you," Fergusson said.

As for what defines a GoW multiplayer game, Fergusson referenced "intimate violence." In other words, it's all about getting right up to your enemy and taking them out in the most grisly way possible. To that end, The Coalition added some fresh close-combat moves to vary gameplay and provide new opportunities to get up close and personal with the competition. The "yank and shank," for instance, lets you pull an enemy hiding behind cover over to you, leaving him vulnerable for an up-close kill.

The "vault kick," meanwhile, lets you run full-speed toward a barrier where an enemy is hiding, leap over it and kick him square in the face. Again, the enemy is wide open for a brutal, close-range kill, and that's not a coincidence. Fergusson said using cover to get up close to combatants and take them out with your knife or chainsaw was a defining part of the GoW experience that was missing in the last game. That's where the inspiration for these new moves game from. In actual play, however, I didn't find these moves to be terribly useful. Maybe that's just due to my relative lack of Gears of War experience, but it felt like both the competition and I used teamwork and surprise flanking to get at warriors hiding behind barriers. That said, the game's hardcore fans will almost certainly find ways to use these new moves, but they don't exactly change the core gameplay experience in any major way, at least at first glance.

More notable is a new gameplay mode called Dodgeball. In this mode, once you die, you don't immediately respawn. Instead you're left on the sidelines until someone on your team makes a kill, at which point you get to jump back in. Every kill your team makes brings another player back from the sidelines, and it makes for some pretty wild changes of pace in a match. You and a teammate could be in a dire two-on-four situation, but one kill both takes out one enemy and brings back one of your companions, making it an even three-on-three match. Wild changes of fortune aren't common, but in the time I spent playing Dodgeball I definitely saw a few comebacks in which one team was down to one-on-five, and The Coalition said those types of crazy comebacks are the kind of thing it had in mind when building this new gameplay mode.

Gears of War 4 also makes it a lot easier for inexperienced players to get into multiplayer. There's a new co-op experience in which you and four fellow noobs take on a squad of five AI players in a match that feels just like a standard death match against human competition. To keep the gameplay from feeling too stale, each AI competitor has its own personality and style, just as human players would, and you'll still earn experience you can redeem for in-game collectibles.

Even if you spend a lot of time beating up on bots, jumping in against human players for the first time could still be a jarring experience. As such, the game will assign each player one of six skill-level badges and put you only in multiplayer games with combatants of the same grade. It's a smart move to avoid getting your clock cleaned and then giving up the first time you try multiplayer. Of course, this will all depend on how good the game is at matchmaking, something that remains to be seen. The last few additions are designed for the competitive gaming crowd. Another new mode called "Escalation" is meant for eSports-caliber players. The Coalition said it was the most "strategic" GoW multiplayer experience yet, but I didn't hear any more details on what it'll look like, and I didn't get to play it either. We should learn more about the new mode at PAX East at the end of April, however.

Regardless of what game mode you're playing, you'll be able to take advantage of new broadcasting features to make a live-streamed match much easier to watch. Broadcasters who control what is seen in a live feed now have more options for switching between various players to keep things from being too jerky and jarring. Previously, if you wanted to cycle from player one to player five, you'd have to hit a trigger and jump quickly through four players to get there, but now you'll be able to seamlessly switch between any player view or camera angle you want. It's not something that will matter for most players, but if you're big on watching live streams (or producing your own), they should look better in Gears of War 4.

When the game launches Oct. 11th, it will come with 10 maps, and The Coalition says it intends to release both new maps as well as remastered ones from previous games on a monthly basis. They'll be free, but rather than flood the market with dozens of maps, the game will feature a curated "playlist" of 10 DLC maps in addition to the core 10 that come with the game. They'll rotate in and out so there's always a fresh selection -- but if you really love one particular map and don't want to see it leave, you can buy it and run it on your own private server.

If you want to get a look at how Gears of War 4's multiplayer mode is shaping up, the beta period starts on the 18th for anyone who has played Gears of War: Ultimate Edition; it'll open up to everyone with an Xbox Live Gold account on the 25th. The Coalition warns that this is a true technical beta rather than a polished preview, so things might be buggy or broken entirely. Based on the few hours I spent with it, I'd recommend Gears fans give it a shot and try out a few Dodgeball games: It was a clever way of mixing up a formula that's gotten a little too familiar over the years.

In this article: av, gaming, gearsofwar, gearsofwar4, gearsofwar4multiplayer, hands-on, multiplayer, thecoalition
All products recommended by Engadget are selected by our editorial team, independent of our parent company. Some of our stories include affiliate links. If you buy something through one of these links, we may earn an affiliate commission.