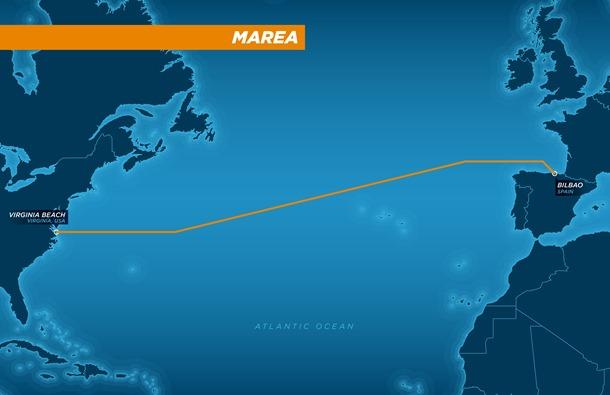 Microsoft and Facebook today have announced a partnership to build a massive underwater data cable connecting the US to Europe, an effort that'll help the two internet giants better move data back and forth around the world. The cable, dubbed "MAREA," should be ready by October 2017 and will have an insane estimated data capacity of 160Tbps, making it the highest-capacity subsea cable to ever cross the Atlantic.

It's not hard to understand why having a better infrastructure for transmitting data is important to both Facebook and Microsoft. Facebook has a whopping 1.6 billion users, and that's not counting traffic from other hugely popular services like Instagram and Whatsapp. For Microsoft's part, its Azure cloud services use a ton of bandwidth, and that's without mentioning its other cloud-based products like Bing, Office, Skype and Xbox Live.

The MAREA system isn't just for Microsoft and Facebook, however. The cable will be managed by Telxius, a division of the Telefónica telecommunications company. The company will then sell off capacity from MAREA to companies in addition to Facebook and Microsoft.

The cable itself will stretch from Virginia Beach in the US to Bilbao, Spain, a rather unique path. Most trans-Atlantic cables originate in the New York City / New Jersey area, despite the fact that many huge data centers are located in Virginia. Additionally, this route further south from most large cabling systems will supposedly allow for more "resilient and reliable" data connections -- something of the utmost importance when dealing with internet services like those Microsoft and Facebook deal in.

In this article: cable, datatransfer, facebook, gear, internet, marea, microsoft, transatlantic, uk-reviews, UnderseaCable
All products recommended by Engadget are selected by our editorial team, independent of our parent company. Some of our stories include affiliate links. If you buy something through one of these links, we may earn an affiliate commission.