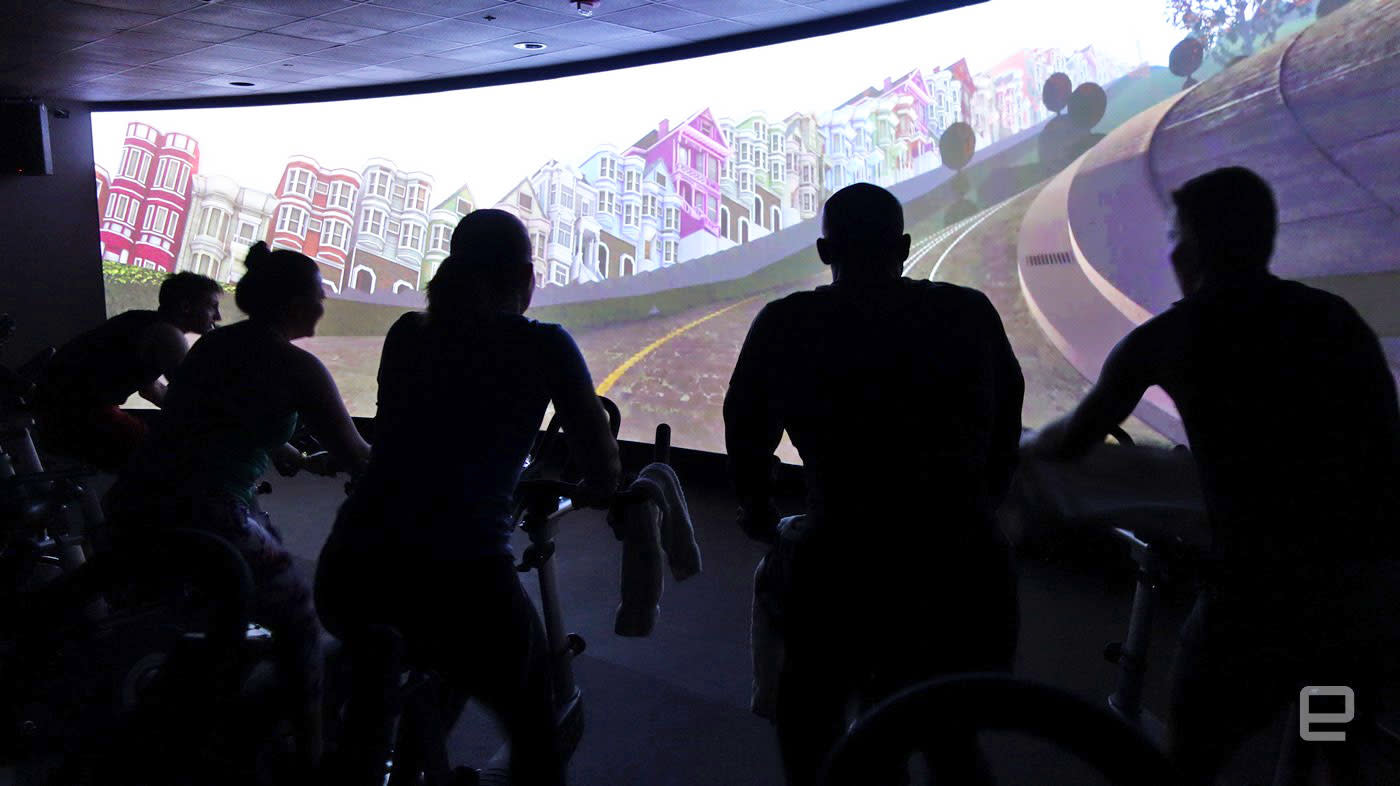 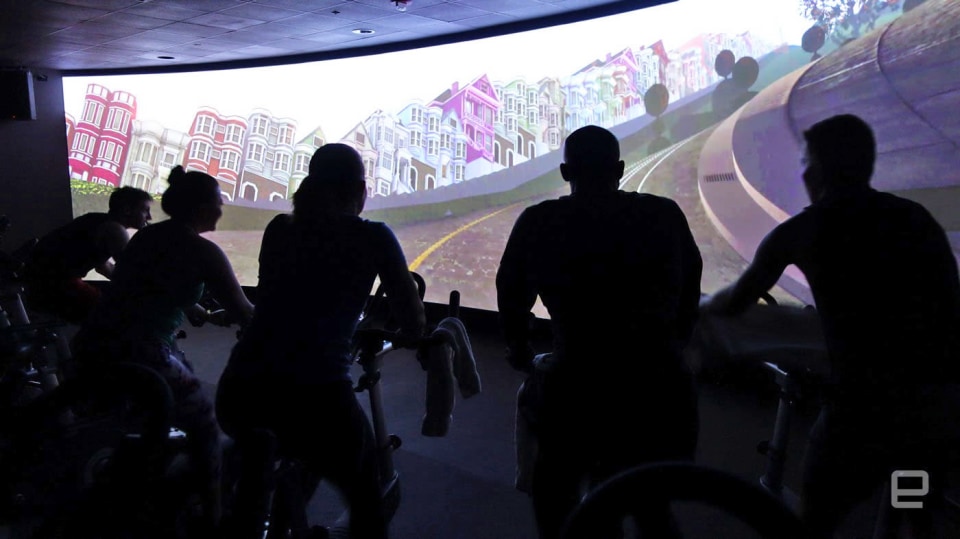 I enjoy stationary bikes because they offer the exercise benefits of cycling without annoyances like bad weather and dangerous traffic. But there are times when I miss some of the benefits of being outside, like a cool breeze and changing scenery. While a gym's AC unit can never really capture the magic scent of flowers and pine as you pass through a peaceful glade, workout designer company Les Mills has come up with a way to at least restore the sense of excursion with its new program, "The Trip."

Instead of staring at a mirror for the duration of each spin class, riders sit on bikes in front of a giant screen and are enveloped in visuals that help create the illusion of motion. You may not physically leave the studio during the half-hour spin session, but thanks to some inventive imagery, you'll mentally travel farther than a standard bike ride could ever take you. The Trip made its debut in Santa Monica, California, last November and in March arrived at David Barton's new gym in Midtown Manhattan, TMPL. That puts it in competition with ImaxShift, the immersive spin class introduced by the eponymous film company in May. Both classes feature a curved screen, booming sound system and an (overly) enthusiastic instructor. When I tried ImaxShift I found some positive aspects to the experience, but the sensory overload left me overwhelmed. On the surface it would seem that the Trip might induce the same feelings, but a series of small differences make it a more uplifting experience.

Though Imax is known for delivering larger-than-life cinematic experiences that can really draw you into the story and setting of your favorite films, Les Mills actually delivered a better narrative for an immersive exercise program. You start in a simulacrum of San Francisco, biking up and down the steep hills of the city until you cross the Golden Gate Bridge and enter a lush green forest. From there the scenery on the 30-foot screen gets increasingly whimsical, from a strange Wonderland-esque backdrop filled with rainbow mushrooms to a series of glossy neon-lined pathways reminiscent of Tron. Eventually you end up back where you started, gazing upon a sunset-tinged cityscape. It's no wonder this particular program is called "The Rabbit Hole."

Each ride has a specific playlist, making it possible to explicitly tie the visuals to the beat of the music. "The Rabbit Hole" starts with a cover of "Who Are You?" by the Travellers and closes with Nas' "The World Is Yours" -- perhaps an indication of how you should feel when you finish the 30-minute program. It's an intense workout, requiring you to bike up steep hills for periods of between 15 and 60 seconds. Of course, these are merely virtual hills that you create by adjusting the resistance lever just below the handlebars on your cycle. The lever was a lot easier than the dials I've used on other bikes, which is just one part of why the Trip is as intuitive as it is. You see, when I tried ImaxShift I had an issue with following the instructor's directions. The music would often drown out his voice, making it impossible for me to keep up and get the full workout. The Trip has the music at a more reasonable level. But even when I couldn't hear the spin director, the screen provided plenty of visual cues as to my next action. A gentle slope? Increase the resistance slightly. A steep hill? Crank it up. Now we're going back down the hill, so lower that resistance all the way down and enjoy the glide.

The computer-generated scenery wasn't even close to Academy Award-winning graphics, but the aesthetic cheesiness of it didn't really matter -- the need to react to the images I was seeing made me feel more involved. It became more immersive as a result, and I was able to imagine myself going up those hills because I felt it both physically and emotionally.

As the class biked back through the forest to end up back in the city where we started, I also experienced an acute feeling of satisfaction. Sure, I was riding high on the thrill of a good workout, but there was also that completion you get out of a good narrative. And, in a way, that's what a bike ride is: It's a simple story, in which you travel some distance and eventually return where you started, a little better for the experience. And isn't exercise in its own way about making us better people?

If the the Trip is a journey of self-improvement you'd like to take, the program is currently available at 24 Hour Fitness Super Sport in Santa Monica and TMPL in New York City. Unlike ImaxShift, individual spin classes aren't available for purchase; instead, you'll have to sign up for a club membership, which runs $165 a month at TMPL. This gives you access to all of the gym's facilities, not just the virtual reality studio. But why would you confine yourself to a stuffy weight room when you could be gliding through futuristic cities and sunset-lit canyons instead?

In this article: av, culture, DavidBarton, exercise, hands-on, LesMills, nyc, spinclass, TL18XRSZ
All products recommended by Engadget are selected by our editorial team, independent of our parent company. Some of our stories include affiliate links. If you buy something through one of these links, we may earn an affiliate commission.