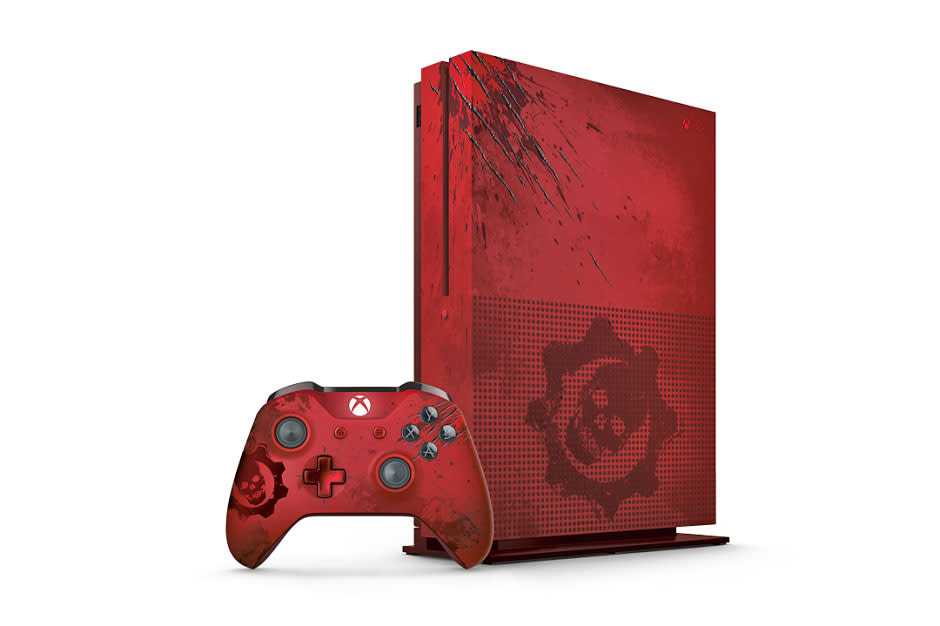 The Xbox One S isn't even out yet but that hasn't stopped Microsoft from taking the smaller console to the custom shop for the first time. If the base model's white exterior doesn't match your decor, maybe a Gears of War 4 blood red one will. It's ugly as sin (now we know what the "S" actually denotes), packs 2TB of internal storage and has laser-etched "claw marks" left by Gears of War 4's new enemies, the Swarm. Of course, HDR video is here as well, and GoW4 is the first game to take advantage of it.

The $449 bundle includes a digital version of the game's Ultimate Edition, a custom gamepad, advance access to the game starting October 7th (four days ahead of its retail launch on the 11th) and some in-game weapon skins. The controller didn't make it out unscathed either, as it follows the design cues of the console, with faux-scratch marks and a bloody thumbprint on the D-pad.

If you don't want a pre-scratched red paddle, Microsoft has a blue one inspired by protagonist JD Fenix -- son of original trilogy star Marcus Fenix -- and his armor. Each are $75 and will be available to pre-order August 1st while reservations for the console bundle are open now.

In this article: av, gaming, gear, GearsOfWar, gearsofwar4, microsoft, thecoalition, xbox, xboxone, xboxones, xboxonespecialedition
All products recommended by Engadget are selected by our editorial team, independent of our parent company. Some of our stories include affiliate links. If you buy something through one of these links, we may earn an affiliate commission.