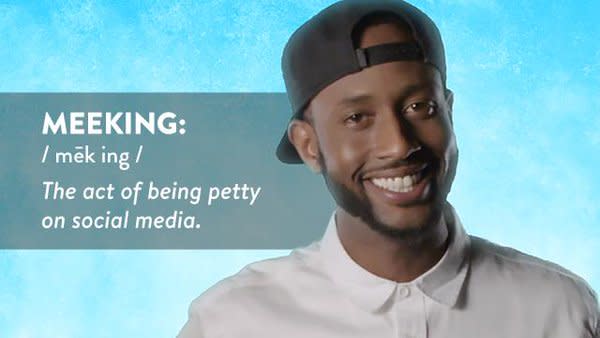 Comedy Central is ordering a TV show starring, created by, and executive produced by comedian James Davis. This might be just like any other series announcement out there, except this show is based on Swag-A-Saurus with James Davis, a Snapchat series from Comedy Central.

You may recognize Davis from frequent appearances on Chris Hardwick's @midnight, and the upcoming pilot he'll star in (as yet untitled) was inspired by the Swag-A-Saurus Snapchat show, which happens to Comedy Centrals' most watched program on the app.

The series is set to premiere in 2017, where Davis will explore topics inspired by his old stomping grounds, or "hood-adjacent," as he says, South Central Los Angeles. If you've seen his Snapchat show, he routinely dissects popular slang terms and phrases like "bye, Felicia" or "meeking," offering definitions and explanations in a funny, offbeat manner.

It's interesting that a show is being repurposed from Snapchat to debut on television, especially as the show continues to post new episodes every Monday and will continue even when Davis's series premieres.

If you're interested in checking it out when it debuts, look for it on Comedy Central in January 2017.

In this article: av, comedy central, entertainment, snapchat
All products recommended by Engadget are selected by our editorial team, independent of our parent company. Some of our stories include affiliate links. If you buy something through one of these links, we may earn an affiliate commission.