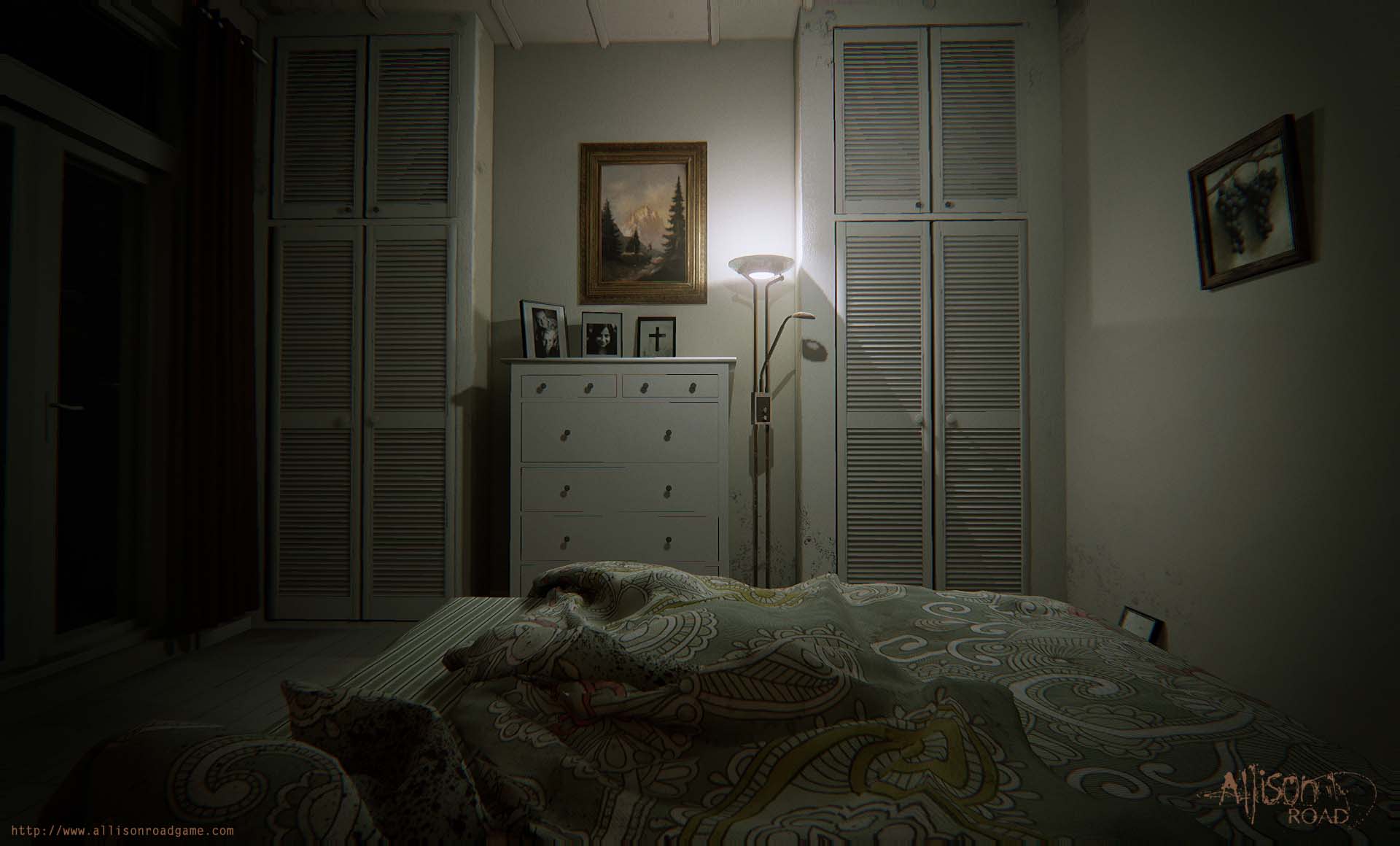 The resurrection of 'Allison Road'

From Chucky to 'Silent Hills,' Chris Kesler explains how a deep love of horror helped keep his game alive.

When Chris Kesler was six years old, he sat just outside his cousin's room and peered at the flickering TV through a crack in the doorway. On-screen, in grainy VHS quality, a murderous red-haired doll in Cabbage Patch overalls laughed as it attempted to murder anyone in its path. Kesler was enraptured. He technically wasn't allowed to watch Child's Play, but he was drawn to its terror the way other kids gravitated toward Saturday morning cartoons.

"I was scared for days, but there was something really fascinating about it," Kesler recalls. "I think one of the major draws of horror is that there's a whole range of emotions that you can experience from the comfort and safety of your home."

Kesler's fascination with terror followed him into adulthood. He's the creator and lead developer of Allison Road, a first-person horror game that fans have been looking forward to since its reveal in late 2015. Allison Road gained early traction largely because of its similarities to P.T., a high-profile mini-game from Hideo Kojima and Guillermo del Toro that served as the prequel to Silent Hills. The Silent Hill franchise is revered among horror fans, and at the time, its resurrection from two masters of storytelling was exciting news.

Here's where Allison Road comes in. It expands on the format laid out by P.T., which is a first-person horror game set solely in a tidy suburban house. In P.T., players loop around and around the same series of hallways as they become distorted with blood, bugs and a demonic presence, the story dripping in as new clues appear. Similarly, Allison Road is a first-person game set in a single house, but it takes advantage of the full floor plan, allowing players to explore every room in any order as a sinister, otherworldly being slowly consumes everything.

Aside from the setting and perspective, Allison Road and Silent Hills have one more thing in common: They've both been canned.

Allison Road hit Kickstarter in September 2015 and was immediately heralded by horror fans as P.T.'s second coming. In Allison Road, players wake up alone in a British townhouse and have to figure out what happened to their family, investigating all of the creepy noises, unsettling visuals and demonic specters that pop up along the way. Early trailers showed a polished and robust 3D environment packed with dark hallways and accessories to interact with, complete with spine-tingling audio direction.

The Kickstarter campaign raised £146,000 ($226,000) before Kesler canceled it in October. This was good news: Allison Road had picked up a publisher, Worms developer Team17, which meant funding was handled. It seemed like an ideal situation, and Kesler celebrated it as such in the game's final Kickstarter update.

However, by June 2016, the deal had fallen apart and Kesler shut down development on Allison Road altogether.

"We have reached a mutual agreement to end our collaboration on publishing Allison Road under Team17's Games label," Kesler wrote in a Facebook post. "Sometime [sic] things pan out differently than expected as game development and publishing have so many layers of complexity."

Kesler took a few months' break from the public eye. Allison Road was his passion project, and its cancellation wasn't bittersweet -- it was only bitter.

"I was really sad about it, to be honest," Kesler says.

He picked up his day job as a concept artist once again and continued quietly working on Allison Road in his spare time. Kesler tweaked the story and figured out how big the game could realistically be if he continued working on it with limited resources. And then, on August 22nd, he felt confident enough to bring Allison Road back from the dead. The game is in development again with Kesler's new studio, Far From Home, which he co-founded with his wife.

"Because this game started as a hobby project, I feel quite attached to it," Kesler says. "The thing with personal projects is that you don't really do them because you have to, so to speak. You do them because you want to. That makes a huge difference when it comes to pushing through slightly more challenging times."

Without Team17's backing, Allison Road has to be smaller in scope, but Kesler doesn't see that as a downside.

"Better to have something shortish but high-quality and tight, rather than artificially long and then in the end low-quality and boring," he says.

Allison Road has come full circle, in a weird way. Kesler is now working on it in his free time, just like he was before the Kickstarter campaign went live. It's a comfortable situation.

"Since I already worked on Allison Road for quite a long time that same way in the past, it wasn't much of an issue, really," he says. In a few months Kesler plans to start actively searching for funding or support, and down the line he might revisit some of the funding tiers that were promised in the original Kickstarter campaign, specifically ones that gave fans a chance to be in the game. However, there won't be another full-blown Kickstarter for Allison Road.

"Kickstarter is really all about trusting someone with your hard-earned money to deliver a good product and support its creation," Kesler says. "Without a track record, it's a tough sell, and there are a lot of Kickstarter projects that never see the light of day or go south in some other way."

He doesn't have any regrets, even though Allison Road has taken a long and winding path through development so far. There's no release window for the game just yet, but Kesler is steadily working away, trying to ensure Allison Road will be the most horrifying experience possible.

"It's really easy to dwell on the past, but the important thing now is to look forward and keep going," he says.