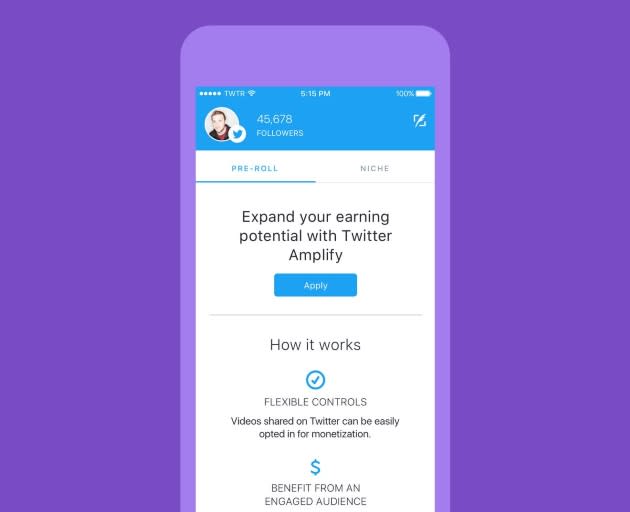 Twitter's finally giving creators a good reason to upload videos to its platform rather than YouTube by allowing individuals to monetize content.

The move is an extension of its existing Amplify program, which previously allowed only registered media outlets to display ads before videos. It's also a direct push to try and grow its video platform in the same way that YouTube attracted millions of creators.

Whether Twitter will deliver on that ambition is another question. It already struggles to retain users and is still working out ways to monetize its products. Making it easy for creators to show ads before videos is great for them, but could potentially upset the network's users.

You do still need to be an approved user before you get the option to tick the box for pre-roll ads, but there are non-exclusivity options that also let you monetize the same content on other networks without penalties. It's a smart move on Twitter's part, asking creators to leap to a new platform would be a tough sell, but offering an additional revenue stream shouldn't be.

Creators will also get the option to work with brands on specific campaigns in some cases, using the expertise it acquired with its purchase of Niche last year.

In this article: ads, advertising, amplify, gear, internet, mobile, twitter, youtube
All products recommended by Engadget are selected by our editorial team, independent of our parent company. Some of our stories include affiliate links. If you buy something through one of these links, we may earn an affiliate commission.