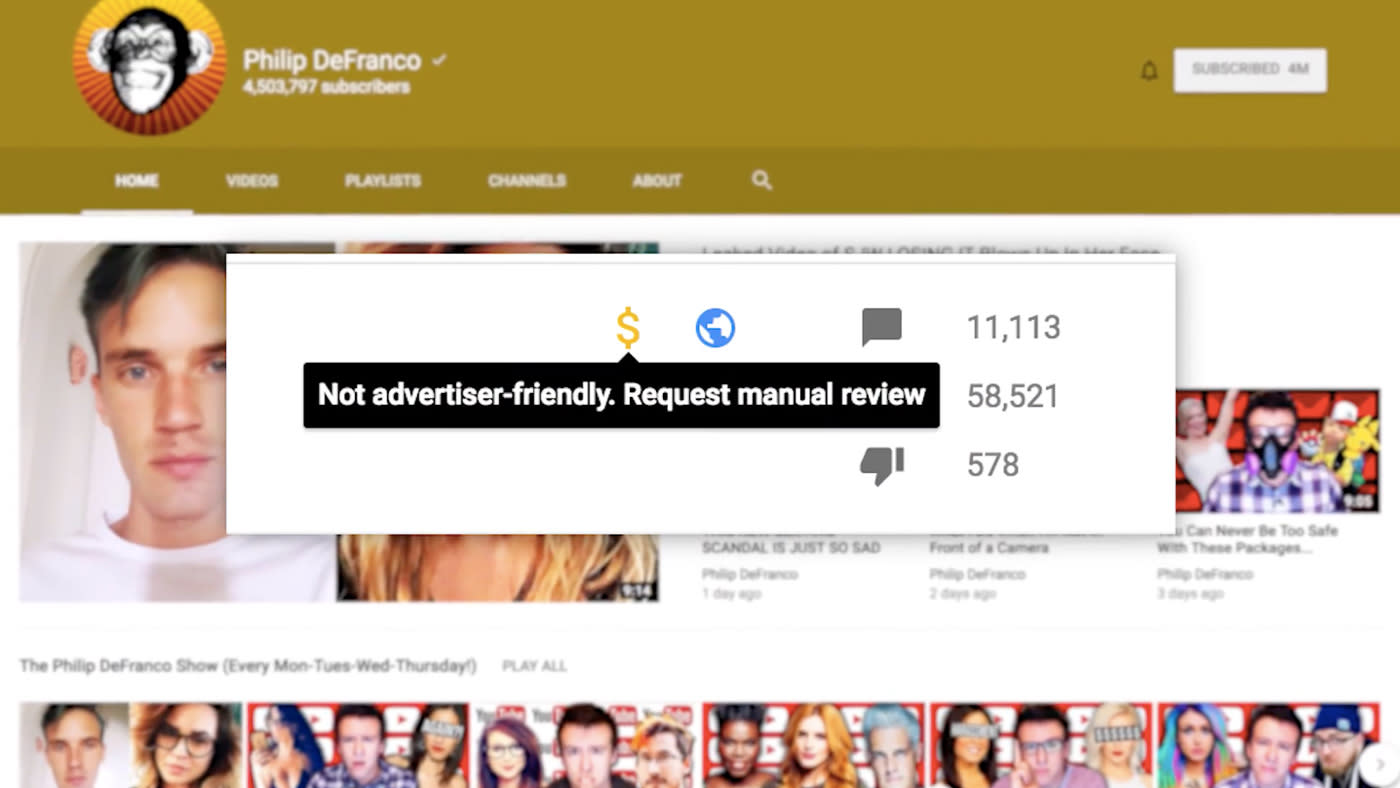 According to YouTube, the platform's Advertiser-Friendly Content Guidelines are intended to protect brands and their advertisements from appearing alongside content those advertisers might find questionable. And for many of the platform's creators, monetizing videos with advertisements can be a lucrative business. In the past 24 hours or so, however, an update to the way YouTube notifies creators that their videos have been stripped of ads has caused an uproar on social media, with some of the most popular names on the site claiming the removal of advertising is a form of censorship.

Leading the charge is 10-year veteran YouTuber Phillip DeFranco, whose channel has over 4.5 million subscribers alone. On Wednesday, DeFranco posted a video titled "YouTube Is Shutting Down My Channel and I'm Not Sure What To Do" claiming he'd received notifications that his most recent video was "Not advertiser-friendly." According to DeFranco, about a dozen of his videos had their ads stripped away, followed by a few dozen more less than a day later. What alarmed DeFranco the most, however, was how the most recently stripped video didn't appear to contain objectionable content at all -- only a discussion of a potentially sensitive topic. DeFranco covered Chris Brown's standoff with the police, among other topics, but he also believes his long-running tagline "'sup you beautiful bastards?" may have gotten him flagged.

Other creators have chimed in on the #YouTubeIsOverParty hashtag, as well. Beauty vlogger Melanie Murphy noted one of her biggest-earning videos was stripped of its advertisements despite not having any offensive language or content. "I'm left with the assumption that the fact that acne is visible in the thumbnails...is off-putting to potential advertisers," she explained to CNET. "If that's the case, it's very upsetting."

Other YouTubers like MrRepzion and Luke Cutforth claim their videos have been stripped of advertisements because of their frank discussion of difficult mental health topics like suicide and depression, and that the "de-monetization" therefore stigmatizes such issues.

While it is YouTube's prerogative to run their platform however they wish (and for advertisers to have a say in where they do and do not want their ads to appear), DeFranco argues that preventing creators from monetizing their work is a form of censorship. By removing a creator's revenue stream, his argument goes, YouTube has rendered that person's business unsustainable and is essentially silencing their voice.

For its part, YouTube has issued a statement saying the policy is not new at all, only the notification system has changed. Whereas in the past a user would have to go into the individual video analytics to see whether a video had been de-monetized, users are now receiving notifications via email. Still, it is unclear if the de-monetization process happens via algorithm, like the platform's copyright flagging system does, or whether there are humans reviewing the videos and removing the ads. There is, however, an appeals process by which users can have their videos reviewed and possibly get their revenue stream reinstated.

In this article: advertising, av, censorship, culture, google, internet, PhilipDeFranco, VideoBlogging, vlogging, youtube
All products recommended by Engadget are selected by our editorial team, independent of our parent company. Some of our stories include affiliate links. If you buy something through one of these links, we may earn an affiliate commission.