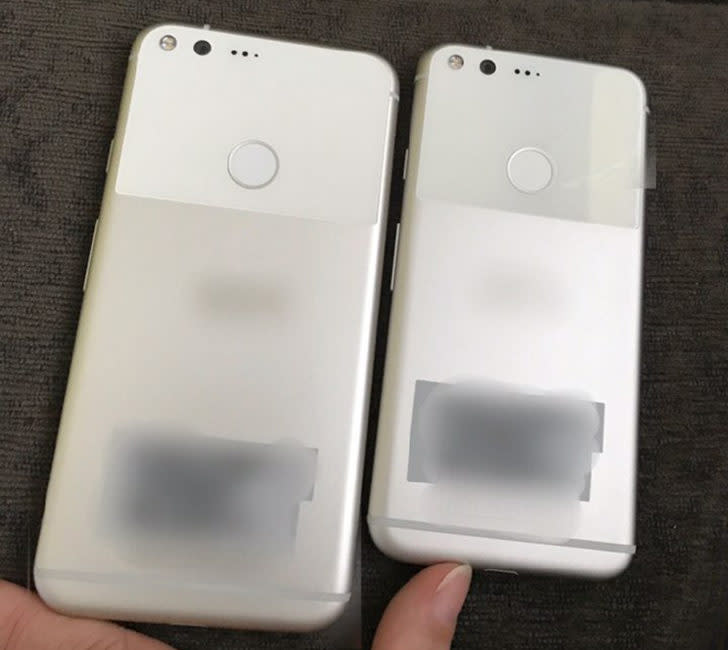 In just a couple of weeks, we could have our first official look at Google's renamed flagship phones, so brace yourself for leaks and unofficial revelations. Take for instance, these images posted by Android Police. They apparently show the Pixel and the Pixel XL, and they do look like the computer render of the phone that leaked earlier, as well as the device Nest used in a new commercial.

If legit, then the big G's latest devices resemble the phones its staunchest rival is known for. Before anyone starts hurling copycat accusations, though, take note that HTC developed the Pixels, and the Taiwanese manufacturer has been using a similar design for its previous models. When it comes to Apple and HTC, there's been a lot of discussion about who copied whom over the years.

In the photo of the phones' backside above, you can see a fingerprint sensor in the middle of the shinier, glass-like section. You can also see a snapshot of the phones' screens with their thick bezels below. As always, take these leaked images with a grain of salt -- you'll only have to wait a bit more before the actual reveal anyway. In this article: gear, google, iphone, mobile, nexus, pixel, pixelxl, TL18PIXL
All products recommended by Engadget are selected by our editorial team, independent of our parent company. Some of our stories include affiliate links. If you buy something through one of these links, we may earn an affiliate commission.