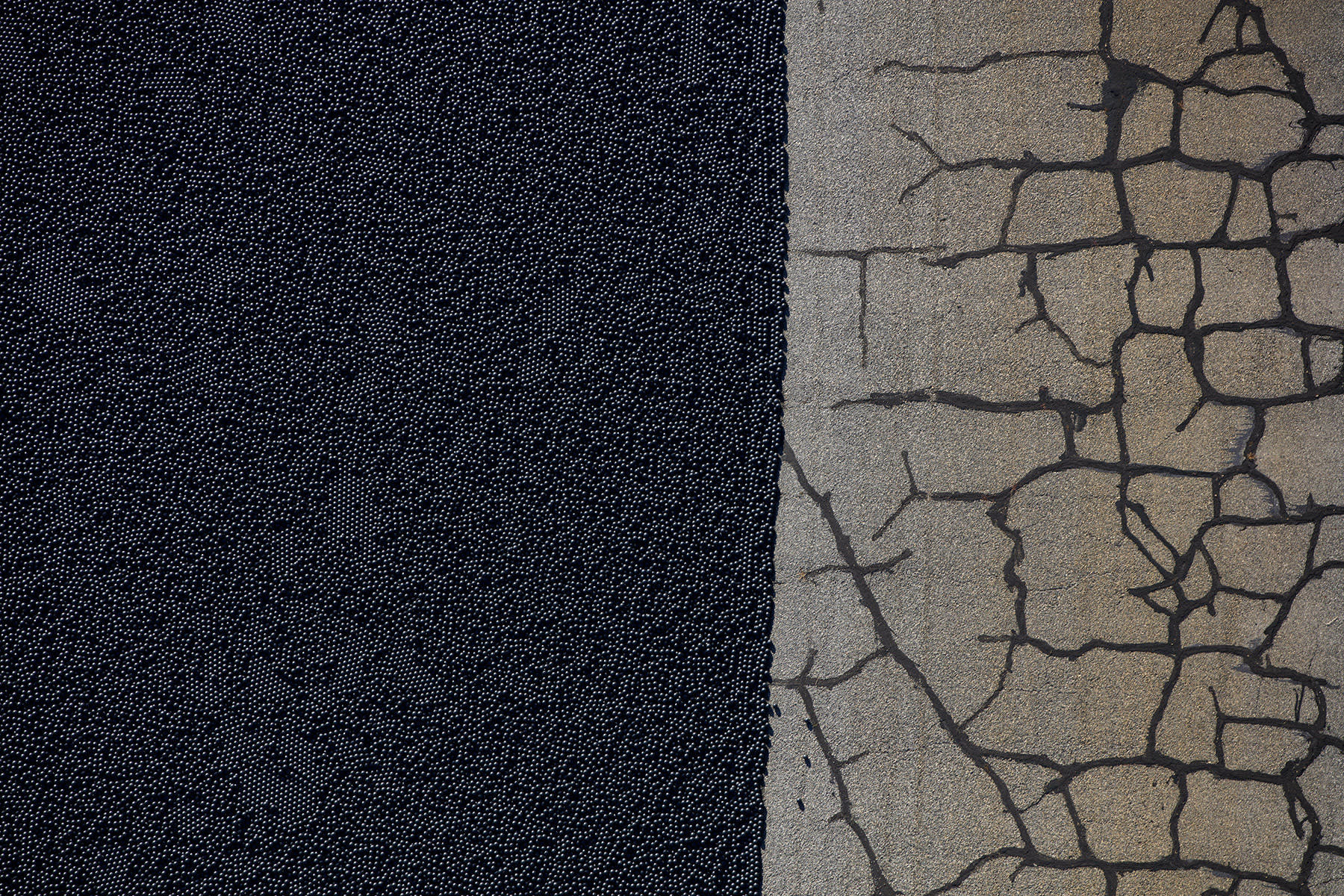 California's water problem is severe. Despite 2016 seeing a distinct improvement in precipitation over previous years, to almost average levels in many areas, much of the state is in extreme drought. As well as ordering mandatory water reductions, the state has also been looking to other solutions.

"Shade balls," the 4-inch wide black plastic balls pictured above blanketing Los Angeles Reservoir, have been touted as one of those solutions. But they're not. The primary purpose of the release, which went viral last year, was to obey Federal rules on covering drinking water. The Los Angeles Department of Water and Power (LADWP) had previously used the balls in smaller reservoirs, and in the case of the Los Angeles Reservoir, says the balls helped the department save more than $250 million over installing a more permanent cover.

Although they were released to headlines like Shade Balls in Los Angeles Reservoir to Save 300 Million Gallons of Water Annually, the main benefit of the balls is to prevent sunlight from reacting with the chlorine-treated water and naturally occurring bromide to create the possible carcinogen bromate. The shade balls aren't a complete solution, and there are accusations that they may deteriorate and release dangerous chemicals into the water. The water in the Los Angeles Reservoir, however, goes through a UV treatment process before it makes its way to citizens.

So why the headlines? Well, the shade balls also discourage algae growth and, as a side-benefit, prevent evaporation to an extent. But the "300 million gallons saved" claim represents less than a day's water use for the LADWP. According to LA Weekly, 300 million gallons of water was worth around $2 million at the time the balls were deployed, or roughly $32 million less than the cost of the balls themselves.

Evaporation reduction is a fringe benefit, then, and tying the shade balls to drought (which the LADWP absolutely did with its press release) wasn't the brightest idea. According to the LADWP, though, shade balls have been a successful alternative to the extensive construction work required to install a cover. They'll remain in place at Los Angeles Reservoir, but they've been, or are being, removed from all the other reservoirs under LADWP's jurisdiction. One such site was scheduled for closure, while the others will get permanent floating covers. Whether this decision was taken for financial reasons, or because those sites lack the Los Angeles Reservoir's backup UV treatment process, is unclear.

Despite their lack of drought-busting guile, shade balls nonetheless make for a fantastic photo opportunity, and have inspired some fascinating stories. Silica Magazine's cover story on the subject is recommended reading, while National Geographic photographer Gerd Ludwig has a photo series that's simply stunning. As for California's water issues, there's always cloud seeding, although that comes with its own conspiracy theories.

In this article: culture, drought, green, losangeles, science, shadeballs, thenewbigpicture
All products recommended by Engadget are selected by our editorial team, independent of our parent company. Some of our stories include affiliate links. If you buy something through one of these links, we may earn an affiliate commission.