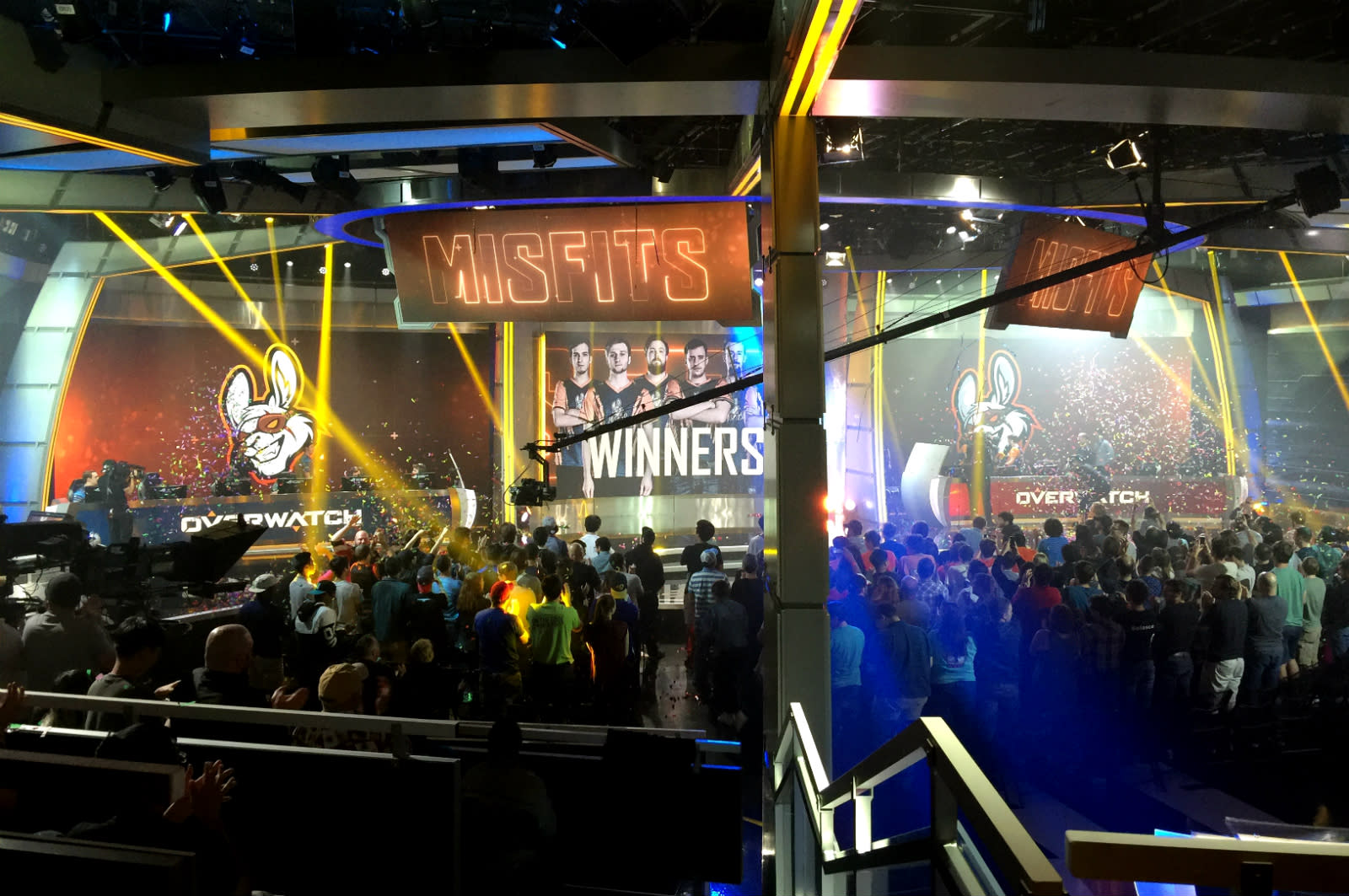 The studio is immaculate. Shiny black floors glisten under orange, blue and purple lights. A dozen people dressed in all black, wires dangling from their headphones to the battery packs at their waists, mill around, preparing massive hooded cameras, adjusting light fixtures, sweeping the floors and, way in the back on a raised platform, tweaking the appearance of the stage from behind multiscreen terminals. It's 9PM on a Friday night and everyone in the room is at work, but the air sizzles with chatter and excitement.

The stage itself is impressive, with three massive, crisp screens alternating between the logo for the 2016 Overwatch Open and the competing teams' insignias. A cartoon rabbit head wearing goggles and a scar over one eye smirks down from the orange side, representing the European underdog team, Misfits. A stylized white "N" surrounded by a circle looms over the North American favorites, EnVyUs. Twelve young men -- some bearded, others clean-shaven -- sit in front of their respective screens at two long, curved banks of gaming PCs, getting in just a few more minutes of practice before the big game; just a few more kills, just a few more dodges and clicks and saves. The mood on the stage is deadly serious. Whoever wins tonight takes home $100,000, after all.

A woman in a long-sleeved shirt with "LOVE" printed on it in large white letters stands on the center platform, in front of the main viewing screen. She yells for someone to turn on Outkast's "Hey Ya."

The speakers continue to pump out peppy indie rock. Rows of empty chairs line the studio floor and cascade up three platforms at the back of the room, strategically positioned around cameras and control panels. The on-air talent arrives about an hour before the show starts, settling into their seats for lighting and mic tests. They've done this before, but tonight is special. Tonight is a first. Tonight's games, the ELEAGUE Overwatch Open grand finals, will be broadcast live on TBS, so families across the country will be able to watch it just like they'd switch on football, baseball or wrestling. Tonight, Overwatch eSports will be live on television for the first time, shout casters, audience and all.

The three analysts at the main casting desk sink into their seats and adjust their papers, jotting down notes and happily chatting with each other.

From the stage, the woman in the LOVE shirt yells again for someone to turn on Outkast's "Hey Ya." The music switches off entirely. She stares down the technicians at the back of the studio and calls out again. The speakers remain silent. She calmly makes her way across the room, climbing the stairs to the men manning the control panel in a shadowy corner; she's not angry.

"The music part is very important," she says, laughing and leaning over the panel to line up the song herself. "Gotta keep 'em hyped, gotta keep 'em turnt."

She plays the music video for "Hey Ya," skipping past the scripted intro and diving directly into the song. By now, people are pouring into the studio, taking their seats on the ground floor and trickling up the platforms. The music energizes the room as the clock ticks closer to 10PM, when the cameras will switch on and the show will go live. The woman takes the stage again, this time to command the eager audience. She tells them how the evening will go down; she explains their role in the show. They need to be excited, energetic and loud. Every time the studio comes back from commercial, everyone in the crowd needs to scream like this is the night of their life.

Two minutes before going live and Daft Punk's "Get Lucky" is blasting through the speakers. She pulls a random fan out of his chair and onto the stage; they dance, both smiling wide as the audience laughs. She dabs and he dabs. The crowd whoops and cheers, and she motions for him to take his seat once again. The show is about to begin. The music shuts off but the audience doesn't need it anymore; they're pumped and ready to demonstrate it at a moment's notice.

She's not a hype director -- she's a puppet master, controlling the entire studio with electric, warm energy. She starts talking and the audience listens; she says scream and the audience screams. She pulls one string, and then another.

Quietly, from the bank of screens and lights at the back of the room, a man says, "Three, two, one and go. It's Domino's, Domino's, Domino's, Domino's..." as the commercials begin. The show starts with a video montage introducing the game. The audience is enraptured and silent until the puppet master leaps out from behind the main screen and yells for them to scream. They do and she slinks back, out of view of the cameras. The studio goes live.

The puppet master appears at the end of the first few commercial breaks to cue the audience, but by the third one, she doesn't even need to prompt them anymore. She fades into the background as the crowd responds according to their training, screaming and clapping whenever the show comes back on. The studio is rocked by waves of screaming jubilation and muted, shifting silence as the crew and the audience alternately watch the games play out and then wait for unseen ads to run their course. The players' faces, captured by cameras hooked onto the top of their screens, hover above the crowd in two long strips, gazing down on their fans and detractors alike.

There's no sound from the game in the studio; just the quick, precise chatter of the play-by-play announcers describing everything happening on the screen. But, the audience doesn't seem to notice or care about the audio: During the matches, the energy is real. The crowd chants, "USA! USA! USA!" unprompted when EnVyUs make a big play, and it's difficult to not get wrapped up in the nationalistic glee.

Someone on EnVyUs selects the character McCree, a vigilante gunslinger, and the massive viewing screen follows him as he hunts down Misfits' Winston, a gorilla scientist character. McCree unloads a rapid-fire round of bullets directly into Winston's face, killing him, and the room explodes in cheers, a few hundred #Harambe supporters standing and raising their arms in pure, unironic victory.

It's midnight by the time the match ends, but the roiling, pumping energy never leaves the crowd, even though the home team loses and Misfits, the European underdogs, leaves with the trophy. A pair of cannons blast out confetti and streamers and the lights go as wild as the audience.

And then the studio empties out, fans pouring into the hallway as they try to take pictures with their favorite players and shout casters. The brooms reappear. The puppet master disappears into a back room, leaving behind a trail of invisible, powerful energy that the studio will store for the next live show, dormant, buzzing and ready to be deployed.

In this article: av, eleague, esports, gaming, overwatch, OverwatchOpen2016, tbs, TurnerSports
All products recommended by Engadget are selected by our editorial team, independent of our parent company. Some of our stories include affiliate links. If you buy something through one of these links, we may earn an affiliate commission.