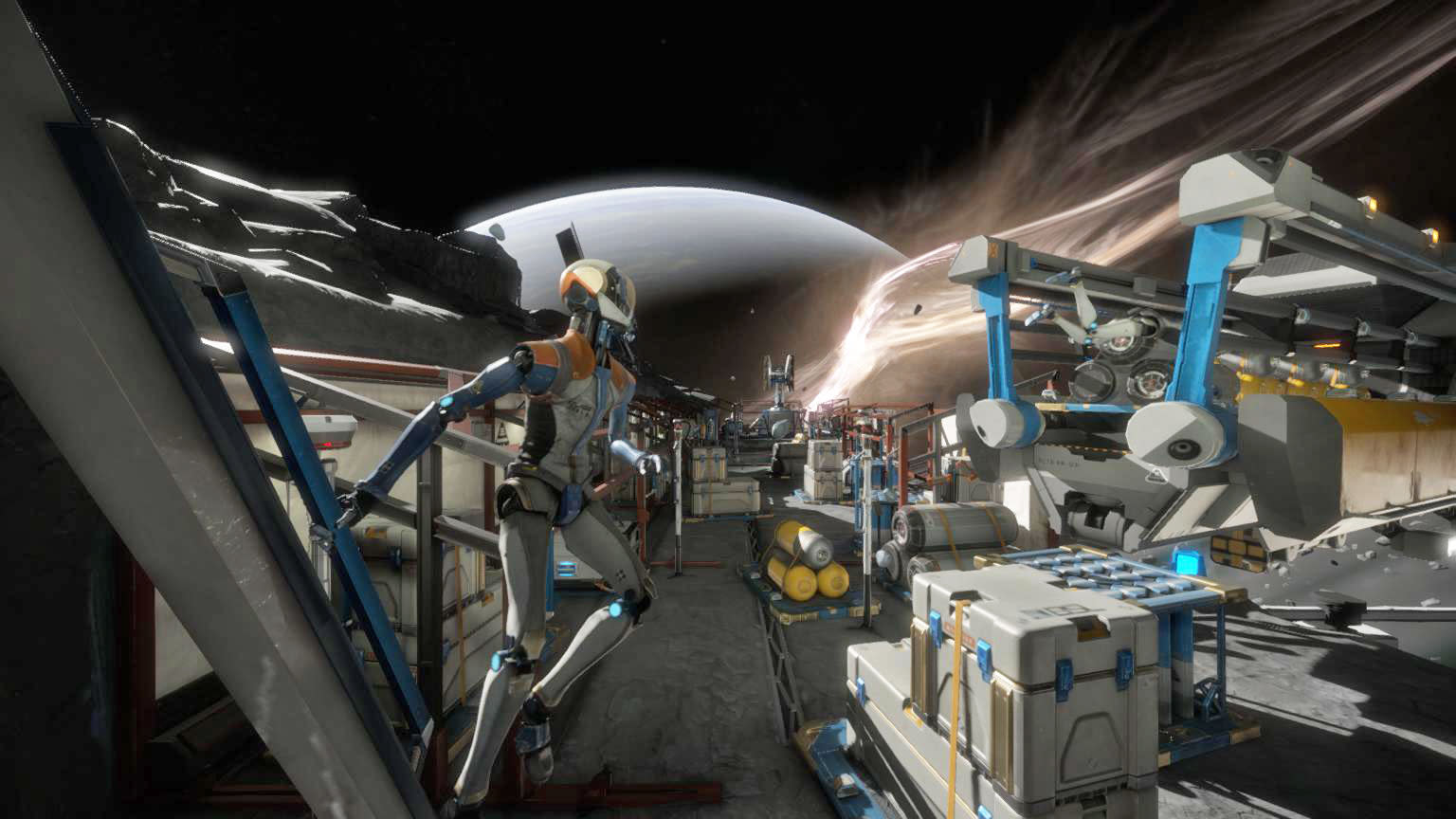 First generation virtual reality may have nailed sense of presence, but one major limitation keeps it from feeling truly immersive: Walking. The endless landscapes of the digital world are hampered by the confines of reality -- your playspace is only so big, and if you walk too far in any given direction, you're going to hit a wall. Most games get around this with teleportation mechanics, allowing the player's avatar to jump to far-off locations. Ready at Dawn Studios' Lone Echo took another approach: turn off the gravity, and eliminate the need to walk altogether.

Lone Echo casts the player as Jack, an artificially intelligent robot who helps astronauts run and maintain a space station that orbits Saturn. It's the perfect environment for a game trying to sidestep limitations of VR's walking problem: with no gravity, there's no need to walk. The player pulls themselves around the space station by hand instead, grabbing rails and pushing off bulkheads to weightlessly drift through the space station's futuristic corridors. Moving with your hands in VR isn't a completely new idea, as it's essentially the concept behind Oculus Studios' The Climb -- but freeing the player from the threat of gravity allows 'Lone Echo' to have a full, endless range of motion that doesn't feel confined by the physical space around the player. Not only does this movement mechanic solve VR's physical space problem, but it makes the entire game feel more immersive. Manually pawing your way through the levels helps you feel connected to the virtual space and makes it easier to get invested in the story. And the story is plenty interesting, focusing on the chaos that erupts after a space anomaly tears through part of the station and threatens your robot avatar and the human astronauts he works with. Along the way, Jack will have to travel and explore the station, cut through bulkheads with a wrist-mounted torch, save human lives and repair broken systems. Admittedly, that would all probably still be pretty interesting if the game had relied on the same teleportation mechanic a lot of VR games are using right now -- but it found a better way.

Sadly, Lone Echo's solution to VR's "walking problem" only works for games that where the player doesn't need to actually physically walk. It's kind of a cheat -- but it's a cheat that represents everything that's great about first-generation VR. Lone Echo seems to be a game that put design first: one that was built around making the most of the medium's limitations. Technology will get better, and each generation of VR will come with fewer and fewer shortcomings for developers to work around. I'm looking forward to that, but I'm also glad we're not there yet. Clever developers can do great things with VR's foibles. I can't wait to see what they come up with next.

Update 10/6/2016: Our first encounter with Lone Echo was the single-player campaign we described above -- but the game's free-floating movement engine is also available as a multiplayer experience. It turns out the game also has a 5 x 5 multiplayer experience that amounts to a zero gravity version of Capture The Flag. It's a little more dynamic than flag carrying, though: players are actually trying deposit a weaponized frisbee in the opposing team's base.

Pushing off bulkheads is still a good way to move around in multiplayer, but Jack's navigational thrusters are a little more effective in the fast-paced action mode. It's a lot more chaotic than the single player mode, but it's nice to see the game's weightless traversal mode used in multiple ways.

In this article: av, games, gaming, loneecho, oc3, oculus, oculusconnect, oculusconnect3, oculusexclusive, oculustouch, oculusvr, virtualreality, vr
All products recommended by Engadget are selected by our editorial team, independent of our parent company. Some of our stories include affiliate links. If you buy something through one of these links, we may earn an affiliate commission.