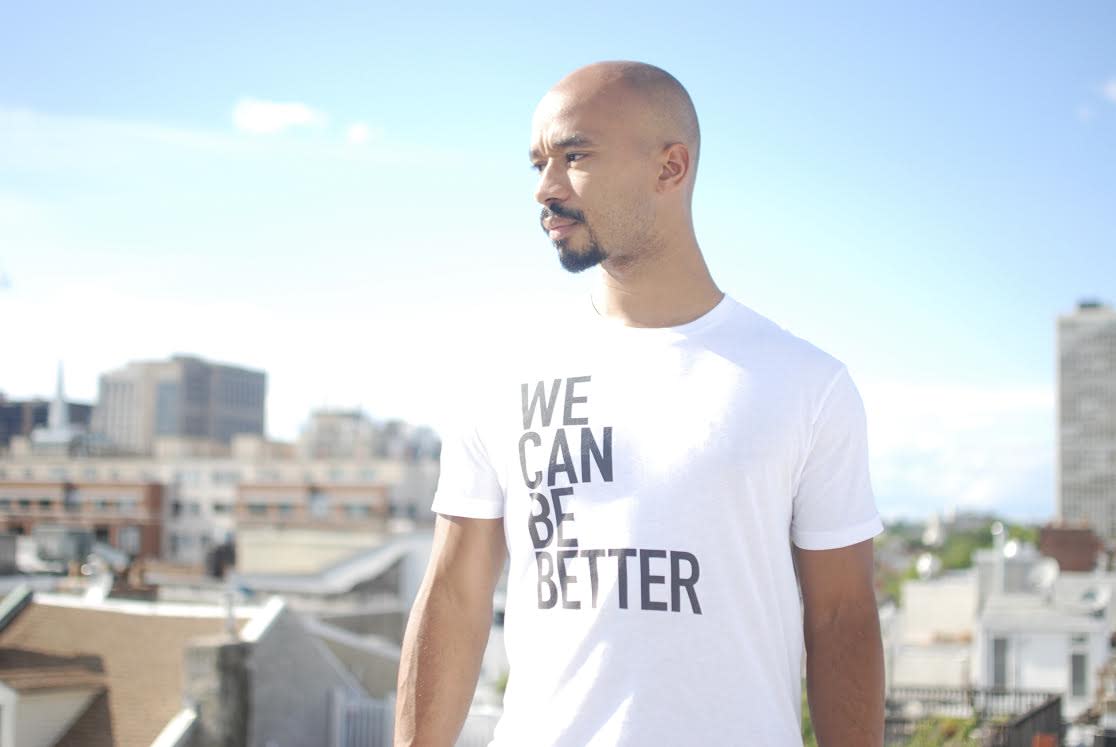 We all have a tipping point. There's a moment when we hear about one more act of violence or one more slight against people in our community, and all of the injustice we've witnessed in a particular situation suddenly coalesces into clear conviction. At this moment, we can't sit silently and watch anymore. We are compelled to act.

Dain Saint's tipping point was the shooting death of both Alton Sterling and Philando Castile, two black men who died at the hands of police officers just one day apart from each other in July.

"I couldn't do nothing, but I didn't know what to do," Saint says. To gather his thoughts, he wrote a post on Medium titled We Can Be Better. It's a call to action and a raw, eye-opening take on the state of trust, fear and empathy in America. As a black engineer living in Philadelphia, Saint himself is realistic but filled with optimism, and so is his blog post.

Along with the Medium article, Saint designed a T-shirt campaign featuring the phrase, "We can be better" in all caps, large black letters cascading down the front of a white shirt.

"It was essentially a campaign against apathy, promoting the idea that we can fix our problems, but first we have to believe they are fixable," Saint says.

"It turned out to resonate more than I expected," he says. "The day that article went live, someone saw me wearing the shirt and yelled out of an Uber to tell me they'd read the article. Crazy odds, but it was incredibly encouraging."

The response surprised Saint, but considering his history in Philadelphia, it makes sense. Saint is a staple of the Philadelphia game development scene as one half of the independent studio Cipher Prime. He's a co-founder of the Philly Game Forge, a collaborative space for local game developers and artists that, unfortunately, had to close down this summer. It was a wildly successful venture that spawned a game development hub in Philadelphia, but funding ran dry and the doors were closed for good in July. The Game Forge's closure helped spark Saint's motivation to do something bigger with his life and his time. Something like the We Can Be Better campaign.

"It was incredibly emotional, sort of the end of an era," Saint says. "I've been saying all year that 2016 feels like it's being written like a TV show desperate for ratings, and in my own life, the Game Forge closure was like my own personal shocking midseason finale. It led to this period of harsh introspection, like completely rethinking what's important to me now that I'm in my 30s."

We Can Be Better is the name of Saint's larger campaign to replace fear with hope and action across the United States, but on its own that's a fairly vague goal. So, Saint distilled these ideas into an actionable and relevant campaign: Free The Vote.

Free The Vote is a movement designed to convince businesses and the government that employees deserve paid time off to vote.

"We started talking about what issues we could realistically tackle, where the root of the problem was, and what was most relevant to now -- and voting was a natural fit," Saint says. "When we learned that 33 percent of people don't vote because it conflicts with work, Free The Vote became a very natural project to pursue."

Saint approached the creation of this campaign like a game jam, something he has plenty of experience with. Game jams are fast-paced challenges that ask developers to create a functioning game in a restricted time period like 24 or 48 hours. Recalling this sense of urgency helped Saint focus on the important aspects of Free The Vote.

"Don't spend forever trying to get everything done right, spend your time getting things done," he says. "Shoot, then aim, right? I know I haven't run these campaigns perfectly, but I also know that if I waited until everything was perfectly aligned I'd only just now be really getting started. And the process of trying has helped crystallize my priorities in a way that just thinking about it never would have."

Saint found help from the local development community, too, including from Cipher Prime co-founder William Stallwood, who helped design the Free The Vote site. It's a striking, professional-looking page with large graphics and a concise message.

Rallying the rest of the local developer community was easy, Saint says. Plenty of developers helped with outreach, putting Free The Vote in touch with companies and individuals who might be interested in participating. Other developers provided ideas about how to use the cloud-communication platform Twilio in an upcoming We Can Be Better campaign. "The Philly tech scene is pretty tight-knit -- enough of us colonized North 3rd Street that the city officially designated it N3rd street," Saint says. "So I could always find more people willing to listen, participate and spread the word."

It's going well so far. By Election Day, Saint and Free The Vote convinced 20 companies to close their doors so their employees could get to the polls. Plus, he's in talks with the City of Philadelphia, which happens to be the region's largest employer.

"Bureaucracies are notoriously slow-moving beasts, so even though we weren't able to get the city fully on-board in time for this election, the fact that we're moving forward gives me great hope for the future," Saint says.

Free The Vote's goal is even more pertinent after Election Day. Following Donald Trump's surprise win over Hillary Clinton, there's a conversation circling online and on televised news networks about the number of people who actually voted this cycle. Initial statistics show that roughly 57 percent of eligible voters actually cast their ballots by November 8th, while 43 percent didn't vote. Free The Vote wants to close that gap.

Even though the campaign is off to a good start, there's plenty of room for growth.

"I'm disappointed that we didn't get as many hourly wage employers as we'd hoped," Saint says. "A big motivator for Free The Vote was realising the choice between working and voting is painfully real for people without the security of a salary, and we'll be focusing on ways to make that more realistic for companies moving forward."

Free The Vote's ultimate goal is for Philadelphia to become the first city in the United States where Election Day is a holiday, and Saint will continue to fight for that future. But, now that the 2016 election is over, the larger We Can Be Better campaign will shift its focus "to healing the divides this campaign season opened up -- giving people the tools to listen, collaborate, and take action," Saint says.

He published another We Can Be Better blog post on November 9th, one day after the election, titled Let's get to work. It's hopeful, and urges readers to eschew blame in favor of self-reflection and action.

These are words that Saint himself takes to heart. In fact, it's the very foundation of We Can Be Better.

"I try to follow a philosophy of relentless self-improvement," Saint says. "I'm always looking for ways to be a better person, even if I don't always succeed. And that process is really painful -- you have to really dig in and confront things about yourself that you don't ever want to think about. So We Can Be Better came about when I realized that, for as much as I've always talked about wanting to make the world a better place, I never really did anything about it. It was just talk."

In this article: activism, av, CipherPrime, culture, DainSaint, FreeTheVote, gaming, Indie, personal computing, personalcomputing, philadelphia, PoliticalActivism, politics, services, vote, voting, WeCanBeBetter
All products recommended by Engadget are selected by our editorial team, independent of our parent company. Some of our stories include affiliate links. If you buy something through one of these links, we may earn an affiliate commission.