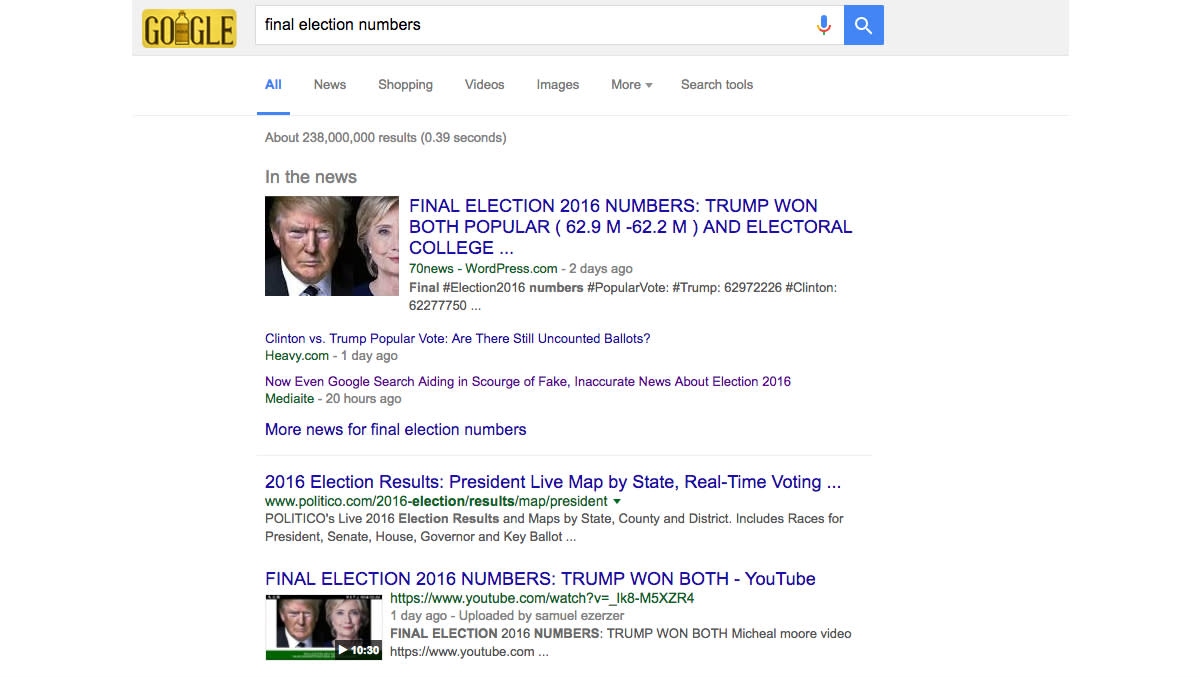 Search engine technology has evolved rapidly over the past few years, but it's far from perfect. One week after the US presidential election, the top Google result for "final election numbers" is a WordPress blog called 70News that's packed with inaccurate information.

The WordPress site appears to be run by one person; it features theories about Trump being chosen by God to lead the United States, plus fear-mongering posts about Muslims and "the brainwashed LGBT community." The blog post highlighted by Google search is titled, "FINAL ELECTION 2016 NUMBERS: TRUMP WON BOTH POPULAR ( 62.9 M -62.2 M ) AND ELECTORAL COLLEGE VOTES ( 306-232)...HEY CHANGE.ORG, SCRAP YOUR LOONY PETITION NOW!"

The post sources a tweet, which in turn relies on an article from the ultra-conservative tabloid USA Supreme that's filled with conjecture about Donald Trump secretly winning the popular vote in the 2016 presidential election. In reality, Hillary Clinton is on track to win the popular contest by nearly 2 million votes and more than 1.5 percentage points, according to New York Times analyst Nate Cohn. That's a wider margin than Al Gore, Richard Nixon and John F. Kennedy received in their respective elections.

The Google search blip appears to be the product of an imperfect algorithm. Google searches for "final election numbers," "final vote count 2016" and similar phrases turn up the WordPress story as the top "In the news" hit, while searching for "election results" populates a Google scorecard with an overview of official data. We've reached out to Google about this situation and will update this story as we hear back.

It's a busy time in the world of fake news. Facebook has recently come under fire for allowing inaccurate and fake stories (many of which are generated by teenagers in Macedonia) to circulate on the site. CEO Mark Zuckerberg argued that it was "extremely unlikely" that these stories helped Trump win the presidential election.

In this article: algorithm, culture, DonaldTrump, election2016, google, HillaryClinton, internet, NaturalLanguage, personal computing, personalcomputing, politics, search, SearchEngine, services
All products recommended by Engadget are selected by our editorial team, independent of our parent company. Some of our stories include affiliate links. If you buy something through one of these links, we may earn an affiliate commission.