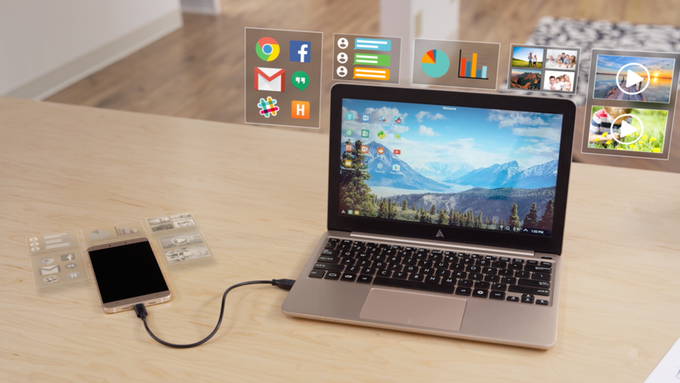 The Superbook, a device that converts your smartphone into a laptop, is the latest high-profile Kickstarter project to delay shipping to backers. The $99 device, basically a screen and keyboard shell powered by your smartphone's processor and memory, raised nearly $3 million after garnering pledges from 16,732 backers. However, the company has announced that it will postpone shipping from February 2017 to June 2017 because design changes and supplier issues.

The company said the campaign's runaway success took it by surprise, so it decided to modify the design slightly to ease manufacturing. "We were advised by manufacturing experts to add in some modifications to make the Superbook easier to manufacture and better suited for our international backers," said CEO Andrew Jiang.

He added that the company is seeking new component vendors after parts prices went way up, and changed the shipping to ocean freight to reduce costs. At the same time, he promised to eliminate VAT and customs expenses for international backers.

Some backers took the four month delay in stride, given the relatively small purchase amount, while others demanded refunds (that aren't forthcoming). One Superbook buyer and Kickstarter "Superbacker" who has funded 76 projects put it this way: Of 39 shipped, 22 arrived late, and for the other projects that haven't shipped, most are overdue. Given that, and crowdfunding's generally dismal delivery rates, buyers of hardware products and (and games) should generally keep their expectations low.

In this article: Crowdfunding, Delay, gear, Kickstarter, Laptop, mobile, personal computing, personalcomputing, Smartphone, SmartphoneToLaptop, Superbook
All products recommended by Engadget are selected by our editorial team, independent of our parent company. Some of our stories include affiliate links. If you buy something through one of these links, we may earn an affiliate commission.