Gogoro's smart scooter launch in Taipei this past summer did so well that the company is already planning on launching it's smart scooter and battery-swapping ecosystem in Amsterdam. But according to CEO Horace Luke, the company has received a ton of requests from cities and scooter rides all over the world. So for those jonesing for one those speedy bikes, you may be in luck. Today the company announced a home charger and an initiative to roll out in more cities.

The new GoCharger brings battery charging into the home and into select retail stores. It's part of the company's new OPEN (Owner Proposed Energy Network) initiative to roll out the scooter and its battery packs into cities not already serviced by the company.

The way it works is that if enough individuals and stores nominate themselves, a business, or community for the initiative, the company will start selling its scooters and chargers in that city. Individuals will have to pay for the charger while stores, coffee shops, etc. can have it for free if they make it available to the public.

Gogoro made news at last year's CES with its swappable battery solution to electric vehicles. Instead of plugging a scooter into a wall or charging station, owners pay a monthly subscription to swap batteries out at charger stations locates around a city. Within a few minutes, a rider could take out a dead battery, swap in a fresh one and be on their way. 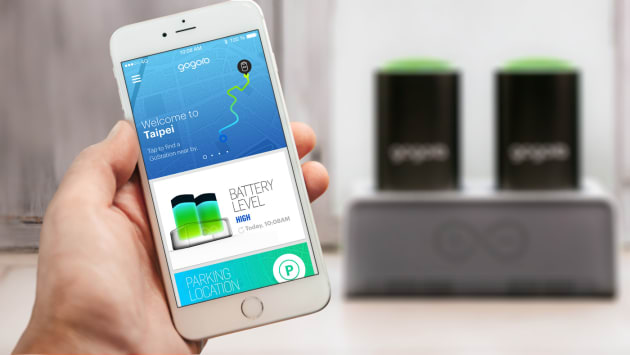 Horace told Engadget, "we envision a system where customers are able to predominately charge overnight and use the open network to charge and top off. Plus it'll build a network more quickly in places that might not be on our hot list."

Gogoro might also open to partnering with select retail sites to sell and maintain their scooters in OPEN initiative cities. Currently the only way to buy one of the scooters is through the company's own stores.

You can sign up now to be part of the OPEN initiative, but don't expect your smart scooter to be in your garage by Easter. The scooters and chargers will be available in Europe this summer and in the United States after that.

As for the scooters themselves, Gogoro announced that both new and current bikes will soon support keyless unlock and start. Owners will be able to fire up the electric vehicle with their iOS or Android smartphone.

In this article: ces2016, Electricvehicle, gear, Gogocharger, Gogoro, green, home, mobile, Openinitiative, Scooter, transportation
All products recommended by Engadget are selected by our editorial team, independent of our parent company. Some of our stories include affiliate links. If you buy something through one of these links, we may earn an affiliate commission.