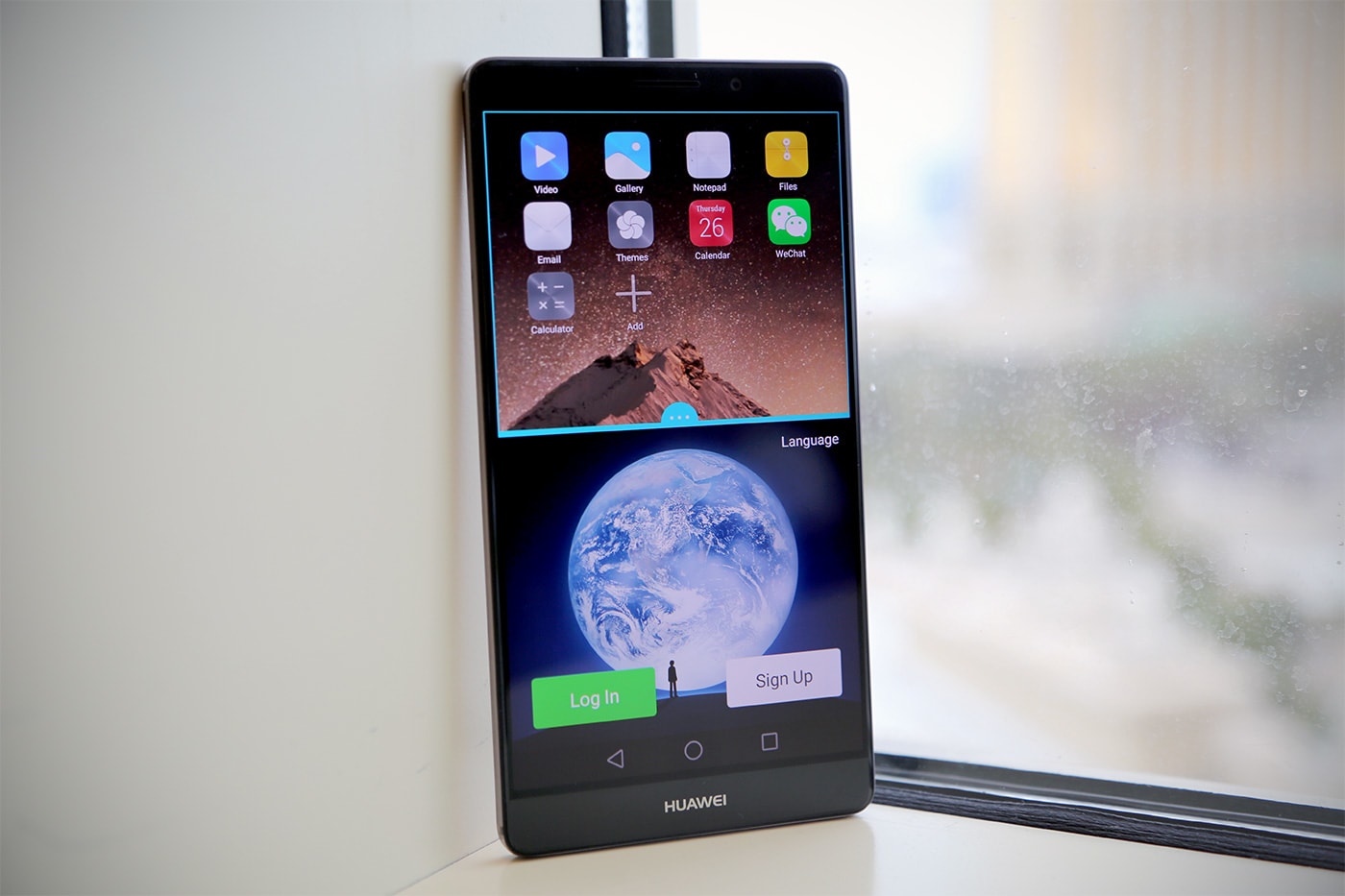 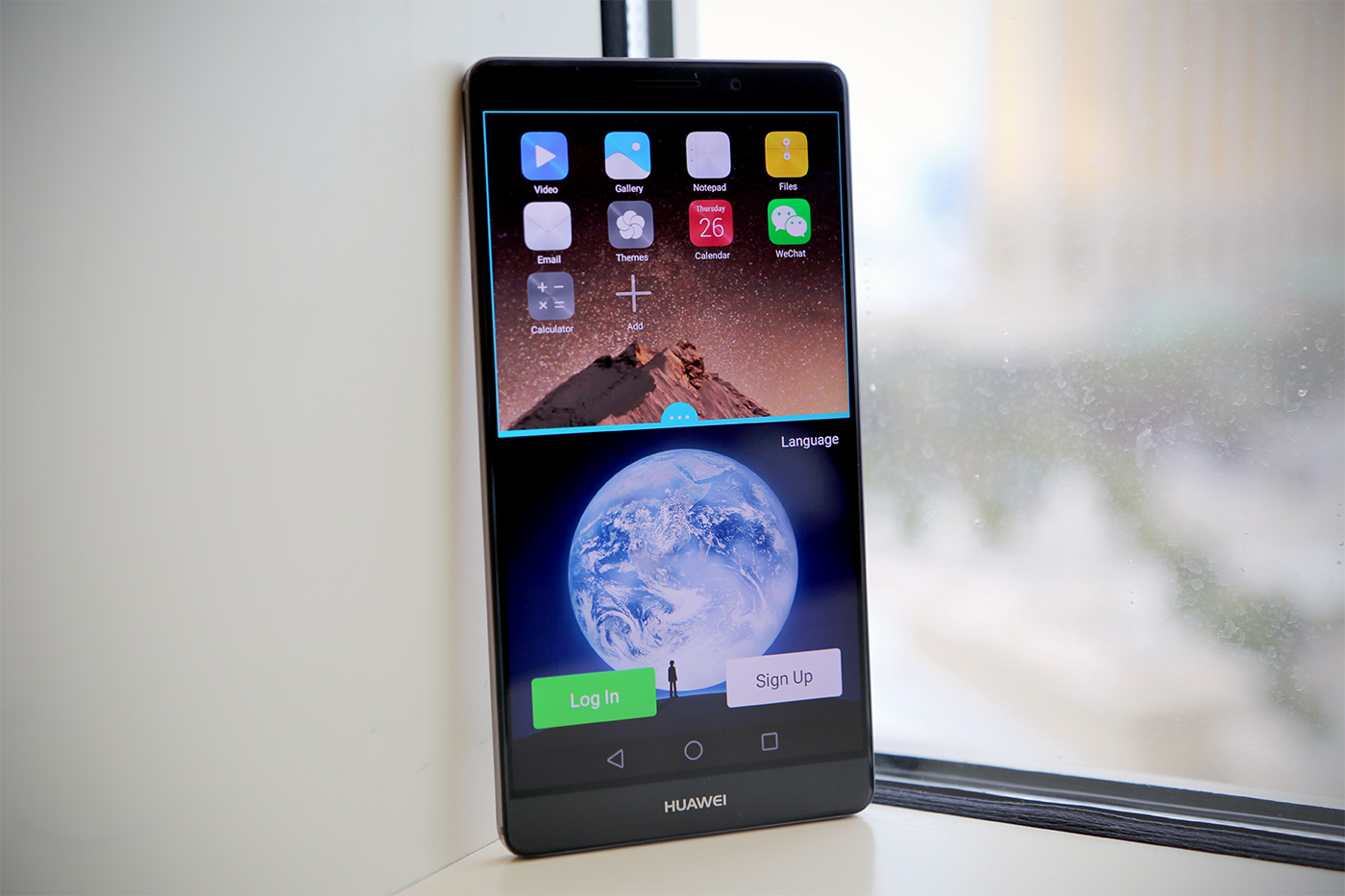 Huawei earned a new legion of fans after crafting the surprisingly good Nexus 6P, but its new flagship — the Mate 8 — is a drastically different beast. The company announced at its CES press conference that the Mate 8 will get a global launch, but I've been fiddling with the phone for a few days already. I plan to put it through the wringer by using it all the way through the nightmare that is CES, but one thing is clear even after a few days: Huawei knows how to craft a lovely phone. Now, if only its software chops were as good.

We've known what's inside the Mate 8 for some time, I'll settle for a brief recap. Rather than slap a Snapdragon in the Mate 8, Huawei instead chose the new octa-core Kirin 950 with its combination of four Cortex-A72 and four Cortex-A53 CPU cores, along with either 3 or 4GB of LPDDR4 RAM and ARM's flagship Mali-T880 GPU. Throw in a supposedly first-rate camera sensor made by Sony (the IMX298, if you care) and startlingly big 4,000mAh battery and you've got further proof that Huawei is no slouch in the hardware department. Thumbing through menus, swiping through apps and just using the phone the way it was meant to be used presented very few instances of stuttering and slowdown, and even then, I'm inclined to chalk it up to Huawei's over-the-top interface rather than actual hardware funkiness. 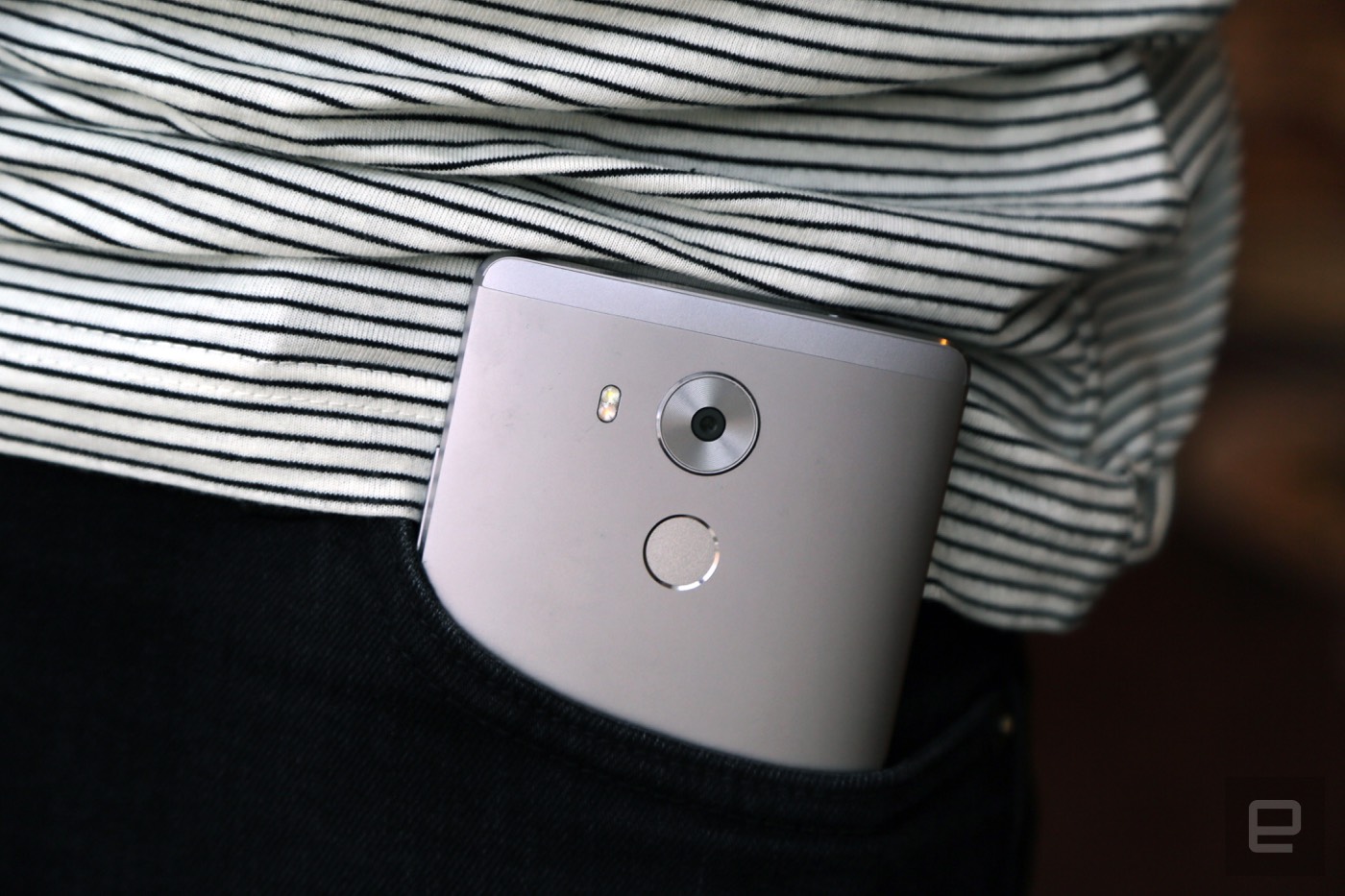 That camera, on the other hand, seems less immediately impressive. I'll have to spend more time with it to really get a feel for its performance, but while colors seemed more-or-less right on, I was hoping for more clarity in some of my shots. The issue is more apparent in lower light (as always), but I'll keep fiddling and post a comparison between the Mate 8 and the Nexus 6P before we leave Vegas.

Let's not forget what the device is like to grip, either. For a phone with a 6-inch, 1080p screen — downright silly by most people's standards — the Mate 8 is a pleasure to hold. There's barely any bezel flanking the left and right side of the display, and the entire package is only 7.3mm thick to boot. If anything, the biggest surprise is that the Mate 8 doesn't have a USB Type-C port for charging and data transfer like its more Google-y cousin. Next time. The Mate 8 does, however, have a fingerprint scanner on its back that's about the same size as the one on the Nexus 6P and — more importantly — is just as fast and accurate. The 6P's crazy good fingerprint detection ruined just about all other Android phones for me, and the Mate 8 keeps that tradition going strong. 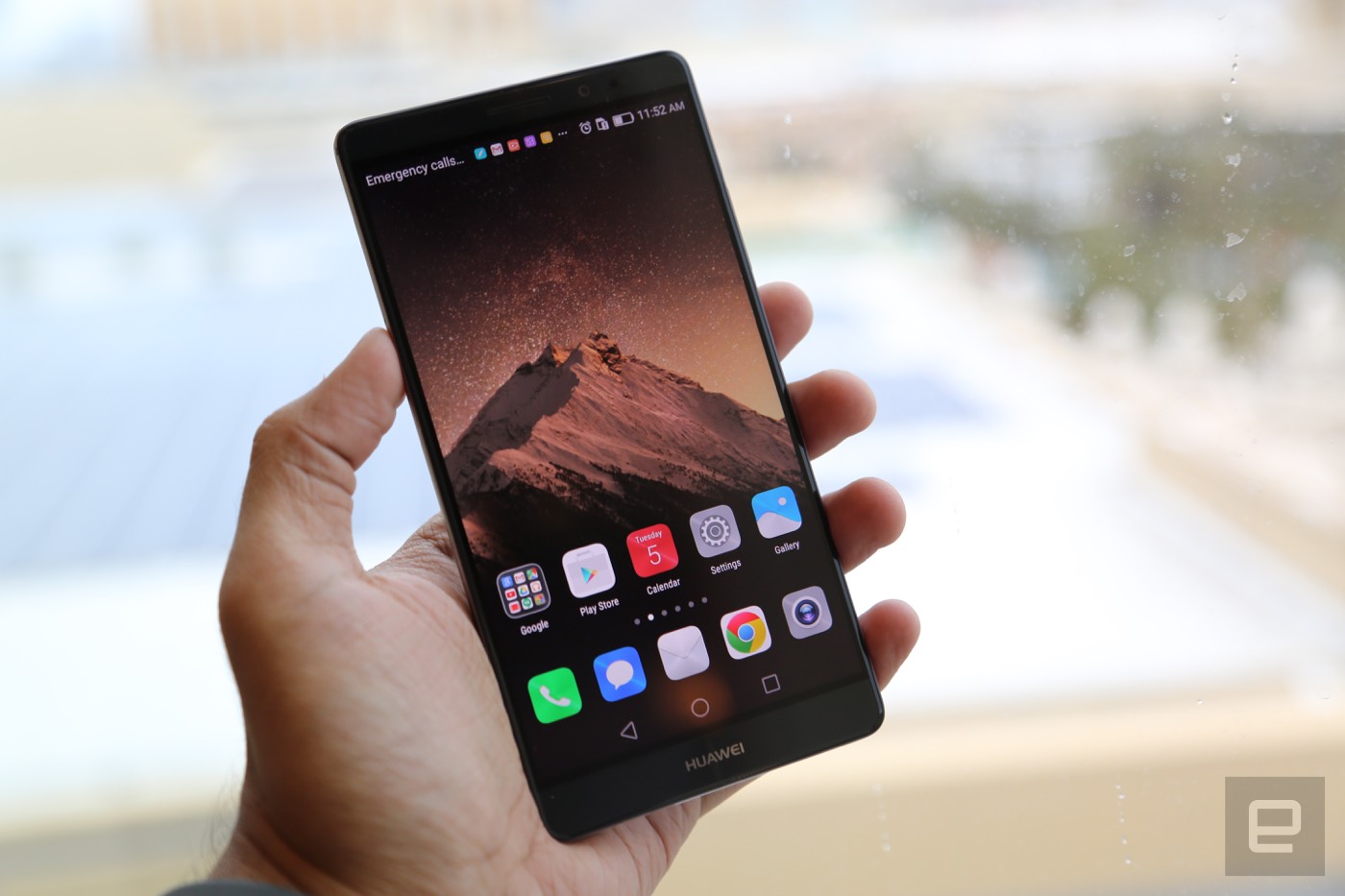 Make no mistake: the Mate 8 is a pretty phone, and I wouldn't mind if this thing wound up being the template for a new Nexus. In fact, if all it took to make a great phone were a mastery of physical design, Huawei would be sitting at the head table with Samsung, Apple and the like. The thing is, it's far more difficult (not to mention expensive) to build unique, valuable hardware features, so no one should be surprised that most device makers invest heavily in iconic software experiences. Huawei is no different, so the Mate 8 is loaded up with the company's EMUI on top of Android 6.0 Marshmallow... for better or worse. Marshmallow makes for a great foundation, but EMUI still feels like a bundle of truly neat ideas mixed in with some terribly executed ones.

Features like Knuckle Sense — which lets you double-tap the screen with your knuckle for a screenshot, or capture a section of the screen by drawing a circle with your knuckle — definitely fall into the neat column. It might sound nutty, but the Mate 8 never had a problem telling the difference between my knuckle and my fingertip. Hell, you can even double-tap on the screen with two knuckles to start a screen recording. It's a gimmick, sure, but the professional gadget reviewer in me appreciates having my workflow streamlined. Often though, it's the little things that are the most obnoxious. Consider your notifications, for starters: subject lines for emails are rendered in a darker color than the rest of the body, which means you'll often struggle to read them against the translucent grey of the notification shade. Who thought that was a good idea? And I still prefer having the standard Android app launcher rather than having all my apps splayed across my homescreen a la iOS, but that's more a concession to the ways of the Chinese market than anything. 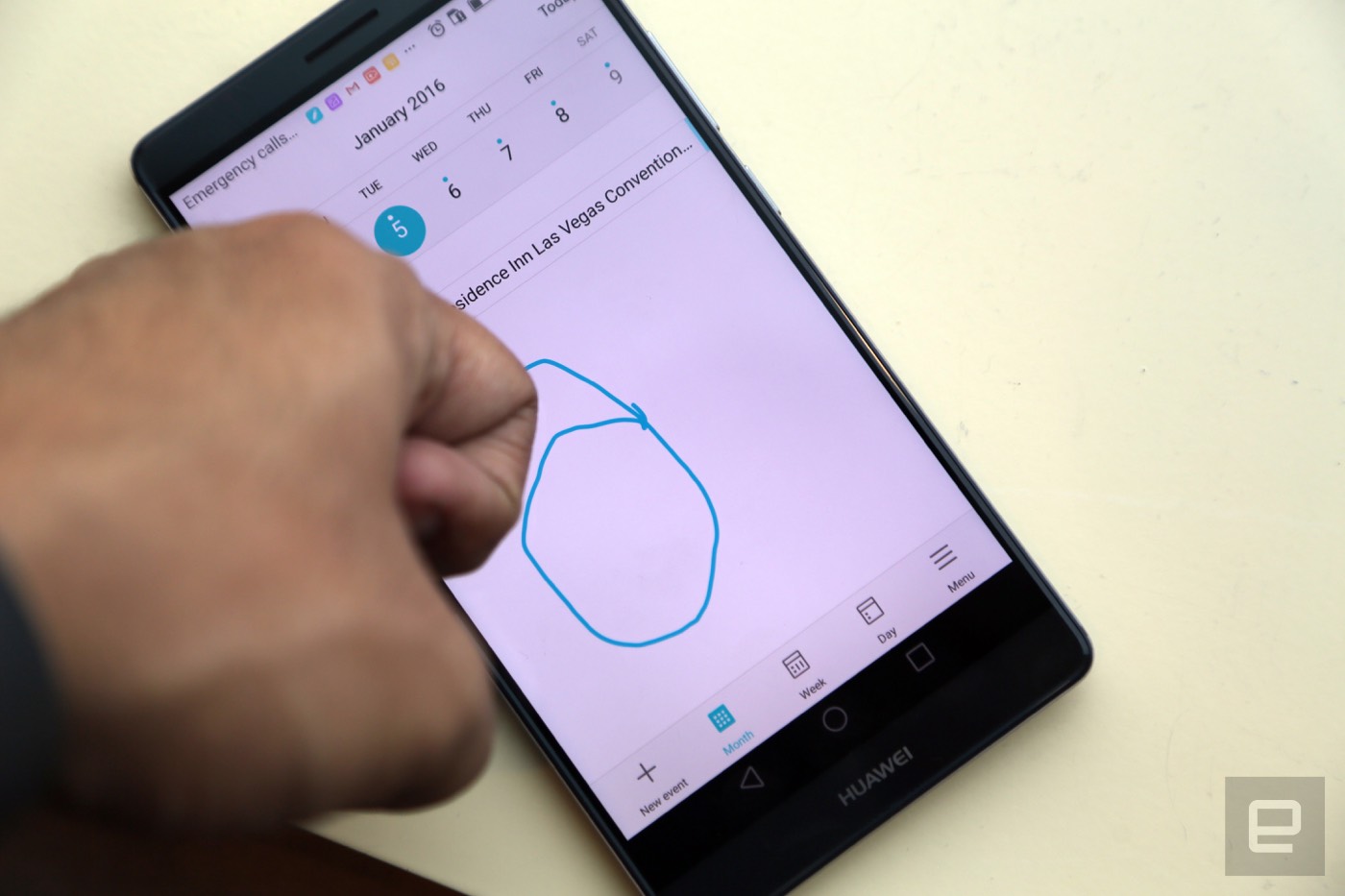 So yeah, EMUI in general isn't exactly my cup of tea. On the flip side, it's plenty skinnable if that's your thing and you can fiddle with themes to turn the Mate 8 into something more up your alley. And for what it's worth, Huawei is aware of the vocal minority calling for stock Android on their devices — I wouldn't count on the next Mate coming with pure Marshmallow but it's not completely out of the question. Despite an overbearing touch on the software side, I can't help but think Huawei's got something pretty special here. Too bad it probably won't ever get a US release — the Mate 8 will hit the usual far-flung markets shortly, though.

In this article: android, ascendmate, ces2016, hands-on, huawei, marshmallow, mate, mate8, mobile, preview, timeline16cesdaytwo
All products recommended by Engadget are selected by our editorial team, independent of our parent company. Some of our stories include affiliate links. If you buy something through one of these links, we may earn an affiliate commission.