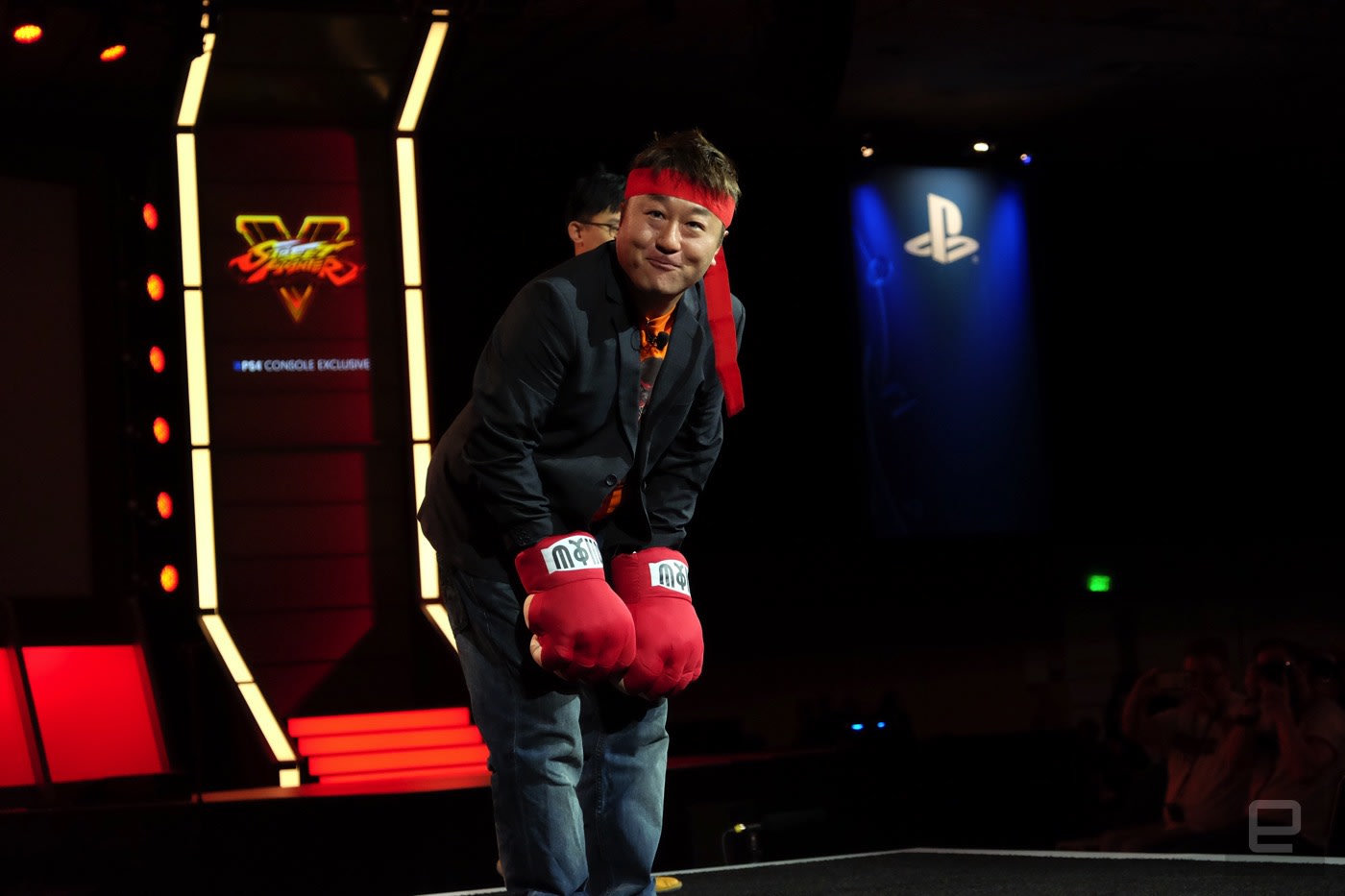 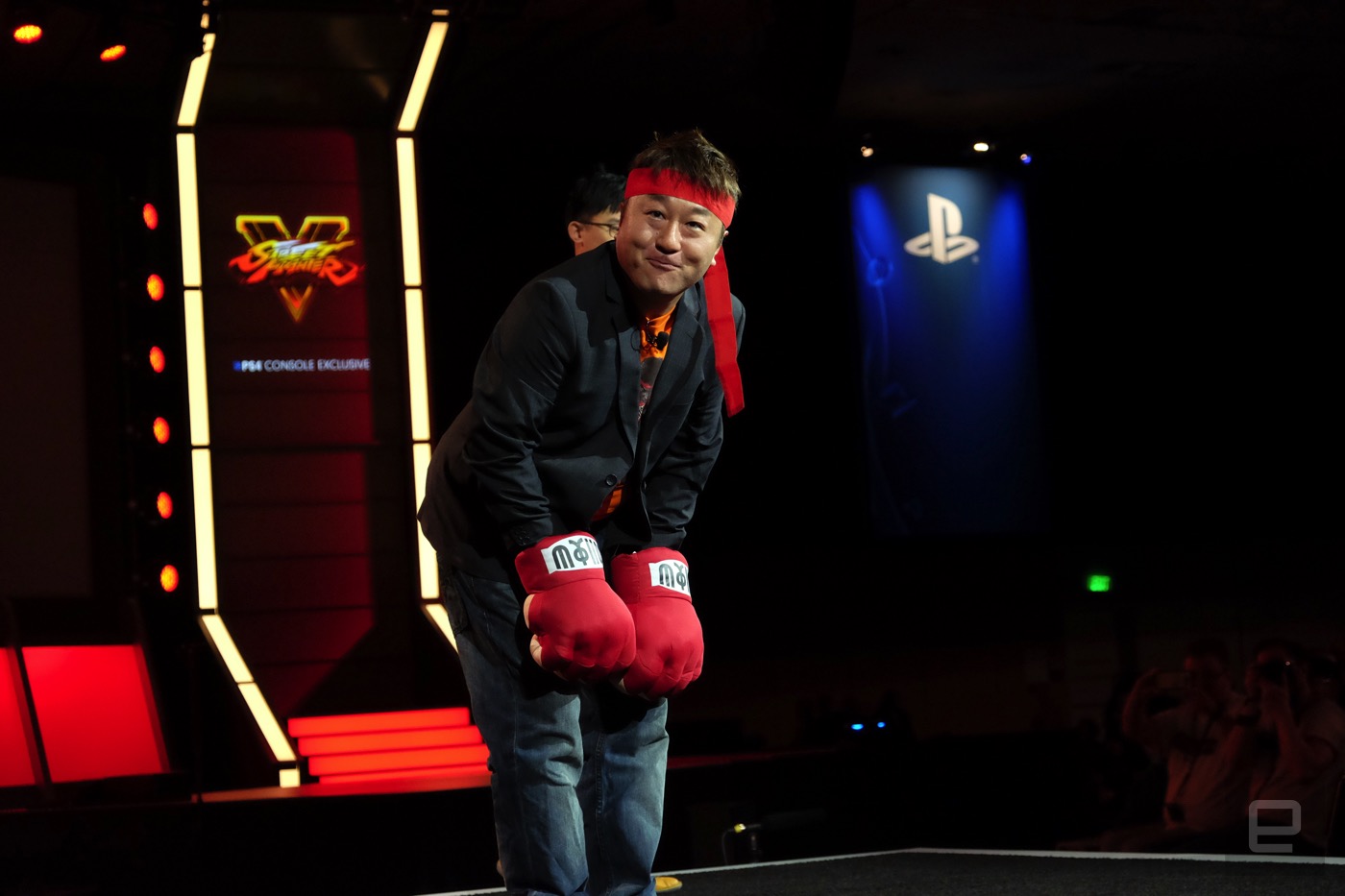 Street Fighter IV was a textbook case of how to breathe new life into an aging franchise. Led by Capcom's enthusiastic and passionate Yoshinori Ono, the 2008 release was designed to be a spiritual successor to Street Fighter II, the classic '90s game that practically defined the genre. But Street Fighter IV was far more than just a retro retread: The game was updated with 3D models and a host of new moves, play styles and robust competitive options, including a comprehensive online battle system. It brought the Street Fighter series back into the public mind in a big way and also gave Capcom a perfect title that let the company participate in the growing eSports world.

That's a lot for one game to pull off — and it also make the stakes for a sequel pretty high. After a total reinvention of the series, what do you do for an encore? Luckily, Ono is particularly well-suited to continue guiding the franchise. He's finally almost ready to show off his work — Street Fighter V will launch on February 16th. A passionate Street Fighter fan who basically joined Capcom for a chance to work on the series, Ono believes that there's plenty this new game can do to improve the experience for all players, whether they're competing in tournaments or just trying the series for the first time. 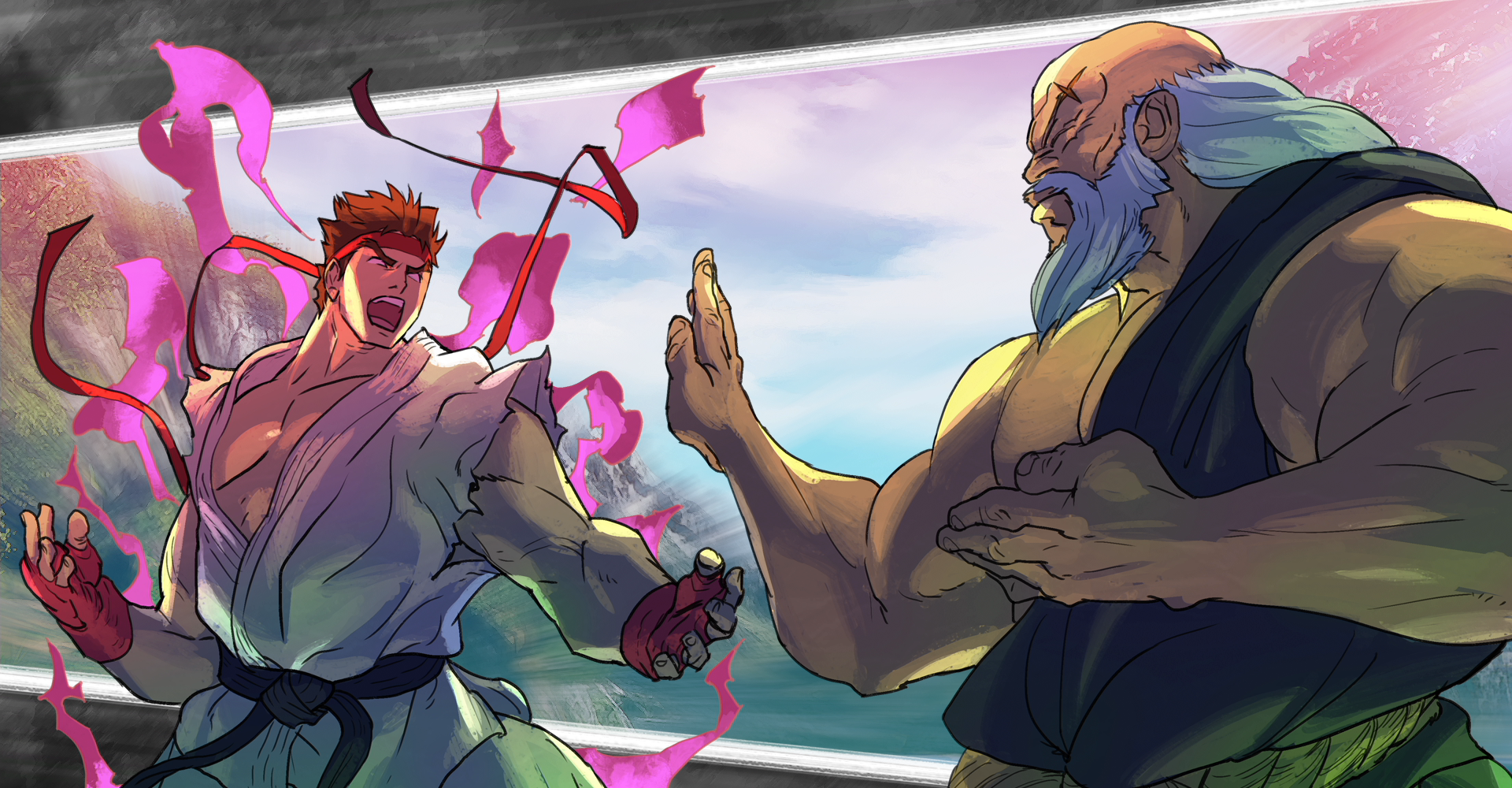 [Note: All of Ono's responses came via his translator and Capcom associate producer Brian Oliveira, and the interview has been condensed and edited for clarity.]

Street Fighter IV was a big leap forward over the games that came before it. Graphically, it improved so much that it was obvious what was new. But now, a lot of those changes aren't as immediately apparent to more casual players. How do you explain to them why Street Fighter V is worth their money?

Yoshimori Ono: As you said, there isn't a huge graphical leap, but there have been some improvements in terms of how everything looks. When we were making Street Fighter IV, we were working very hard to take these classic 2D pixels and convert them into a very beautiful 3D model. With Street Fighter IV — and our art director in the past might get a little mad at me for saying this — I don't think we did the most perfect job at doing that. I think we've been able to make some improvements in that regard with Street Fighter V.

Also in Street Fighter IV, sometimes the motion didn't look as smooth [as we'd like] because the consoles weren't as powerful in terms of handling motion and processing all of that information. This time around, the motion looks very, very smooth, and that's just because the console's power has increased.

On the other hand, there's some stuff that's happening on the back end, specifically talking about the network experience. We're working very hard to make a stress-free online experience that everyone can enjoy, and we've also been able to bring together the PS4 and PC community. We feel, with the way we're handling online network play, people can enjoy it very seamlessly and have a very stress-free, awesome online experience so they can play this game for hours on end.

How does Capcom think about eSports? Specifically, when developing Street Fighter V, how important was thinking about that competitive community?

The quick answer is we really thought about it a lot. We've got the Capcom Cup and the Capcom Pro Tour; we have this top-level player pool who are very much into this and their livelihoods depend on it. We've developed this really nice system that's in place right now in terms of an eSports infrastructure.

However, with Street Fighter V, we're really considering eSports in that we really wanted to reset the community. We want to reset the entire game so that we can reset the playing field and let lots of new people jump in and start competing. Of course, we want everybody from the previous generation to join, but we want to create an environment where everyone can start fresh and be very welcoming to new players as well. We feel that's really important in terms of building [Street Fighter] out as an eSport.

My goal is to really make Street Fighter as an eSport [more] mainstream. When you look back just two years ago, in 2014, we had the Capcom Cup right here at the Warfield Theater in San Francisco, and just recently we had the Capcom Cup 2015 take place at the PlayStation Experience Event. We teamed up with Sony to do that, and we had a $500,000 prize pool there. In comparison with some of the bigger eSports titles out there, this may be like a quarter of what League of Legends is doing in terms of the prize pool. But in comparison with other console games, there's really no one else doing what we're doing right now. As a company, what we want to do is keep this pace, keep that momentum going as we proceed forward into the eSports realm.

"You can look at [competitive] 'Street Fighter' [matches] like baseball. Yes, there's Major League Baseball, but there are also neighborhood baseball leagues where people can get together and play on the weekends." 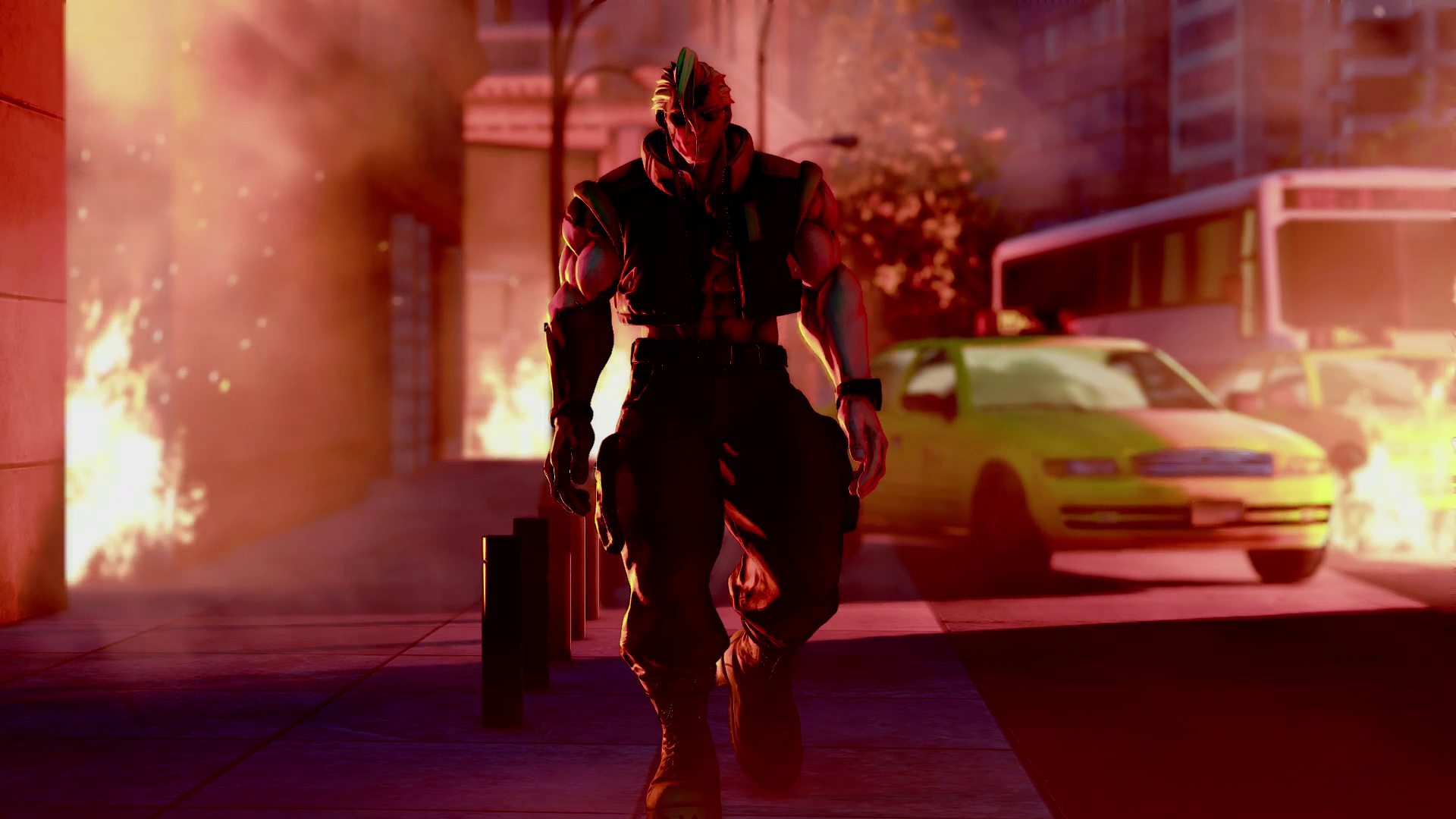 For players who aren't at this level of competitive gameplay, how do you make sure the game is still fun for them and encourage them to go online and keep them from getting their butts kicked by more experienced players — or even just provide a good single-player experience? How do you balance those goals?

With Street Fighter V, there will be a tutorial for beginners in there that teaches the very basic stuff. From there, people can go into the [arcade mode] and play the character stories and immerse themselves in the world of Street Fighter V.

After that, they might feel like "OK, I want to test the waters in terms of online matches. Like you said, there might be some concern about getting your butt whipped the first time you go online. But this time, we built a league system where you have to have a certain level win rate and a certain amount of points built up to proceed to the next league. We're basically segregating people between leagues so you're only playing with people in the same league to help balance out the win rates.

Looking toward the future — it's not going to happen this year, but we're looking into creating tournaments geared more toward the casual player. In Asia, we've already started something where we're going to have college students compete with each other; that's one of the things we're doing. We also have plans — it's still in the planning phase — but we're talking about maybe a parent/child tournament where the parent and their kid enter together.

"With 'Street Fighter IV,' we had a huge turnout of old-school players who came back, and we also gained an entire new generation of players." 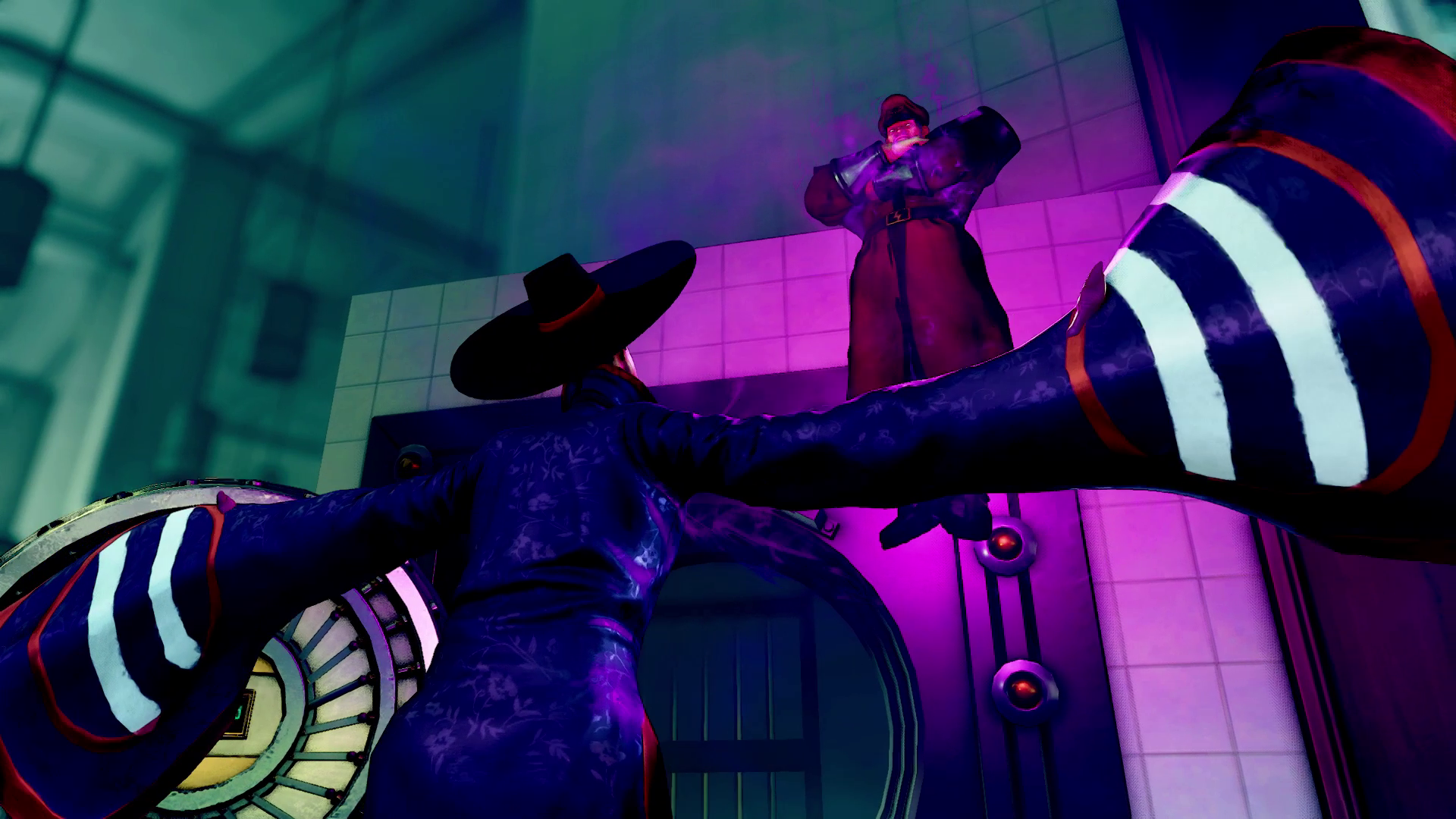 In that same vein, the Street Fighter games have always felt like games that you can just pick up and play and get the basics quickly, but mastering it is a major challenge and takes a lot of commitment. As you go forward and make new games, how do you add new gameplay features without complicating that "pick up and play" mentality?

However, when looking at Street Fighter V and examining who didn't join the Street Fighter scene with Street Fighter IV, we realized it was people who weren't necessarily able to do what they wanted to do with their characters in terms of actual physical execution of the game's moves. With Street Fighter V, we've added a thing called input leniency — moves just come out a little easier than you might expect. A lot of the higher-level, hardcore players might wonder, "Is this OK?" And yes, we think it's fine. Those guys are going to figure out how to use it to their advantage.

The whole idea there is just so people have a feel-good experience with the game. We want people to feel like they have full control over what's going on and make things a little easier for them. Even if you're getting beat up left and right — that might happen, but even despite that, at least you're able to do a really cool move in the game relatively easily. Yes, we do have input leniency now, but we just want to make the game feel good, and it's a good way to bring in as many people as possible. We're trying to make the game feel awesome so players have a very good, comfortable experience playing Street Fighter. 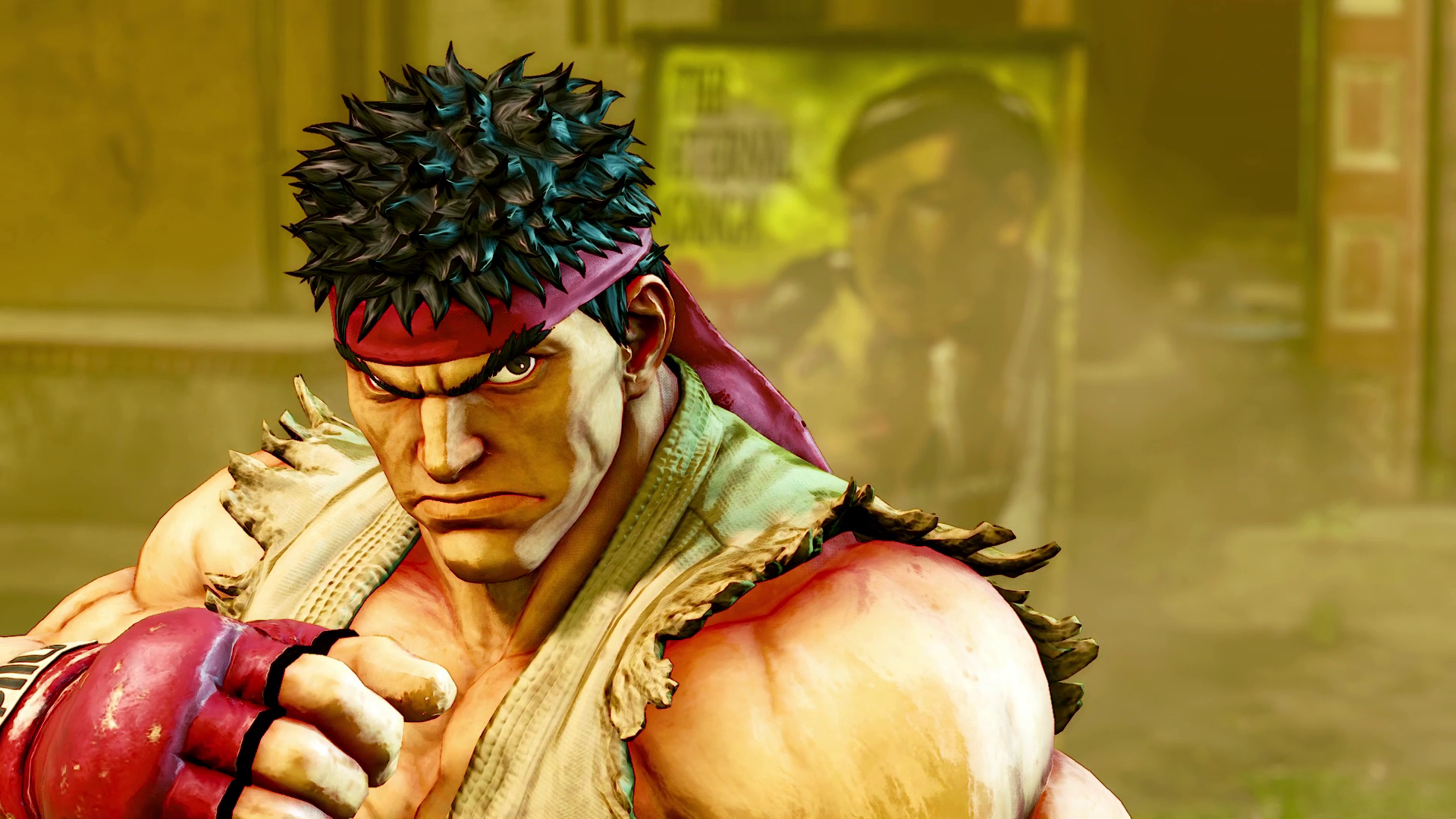 Were you surprised at how many people really wanted a single-player story mode? [Ed. note: Street Fighter V will feature a story mode for the first time — you can get the details on it here.]

I don't know the exact number of people who are actually asking for this, but I can say that after we announced the game, left and right when I was meeting with press and media, they'd be asking, "What are you going to do with the story mode?" And then my Facebook and Twitter accounts were getting bombarded with people asking me what's going on with the story. Honestly, I was expecting people to ask about new battle mechanics, but really the main voice was asking, "What's going on with the story?"

Street Fighter is almost approaching its 30th year, and I've been working on the brand for a very long time, and so ... I reached this point where I had two feelings in terms of the story. One, it's like there's some regret for not maybe paying a little more attention to this in the past. But the second feeling is, "Wow, this many people are really interested in the story content!" It's a mixed bag of feelings.

Also, just giving a little more background to how all this went down — Matt [Dahlgren, Capcom director of brand marketing and eSports] and the Capcom USA team have been pestering me for a long time, saying, "We really need this story content!" And now those folks can say, "See, I told you!" And now I have to say to them, "Yes, you were right!" But they seem pretty pleased with how the story expansion is turning out, so I'm pretty confident that, once this finally is released in June, the story content that fans have been longing for will finally be delivered.

In this article: av, capcom, design, gaming, interview, sony, streetfighter, streetfighter5, streetfighterV, yoshinoriono
All products recommended by Engadget are selected by our editorial team, independent of our parent company. Some of our stories include affiliate links. If you buy something through one of these links, we may earn an affiliate commission.