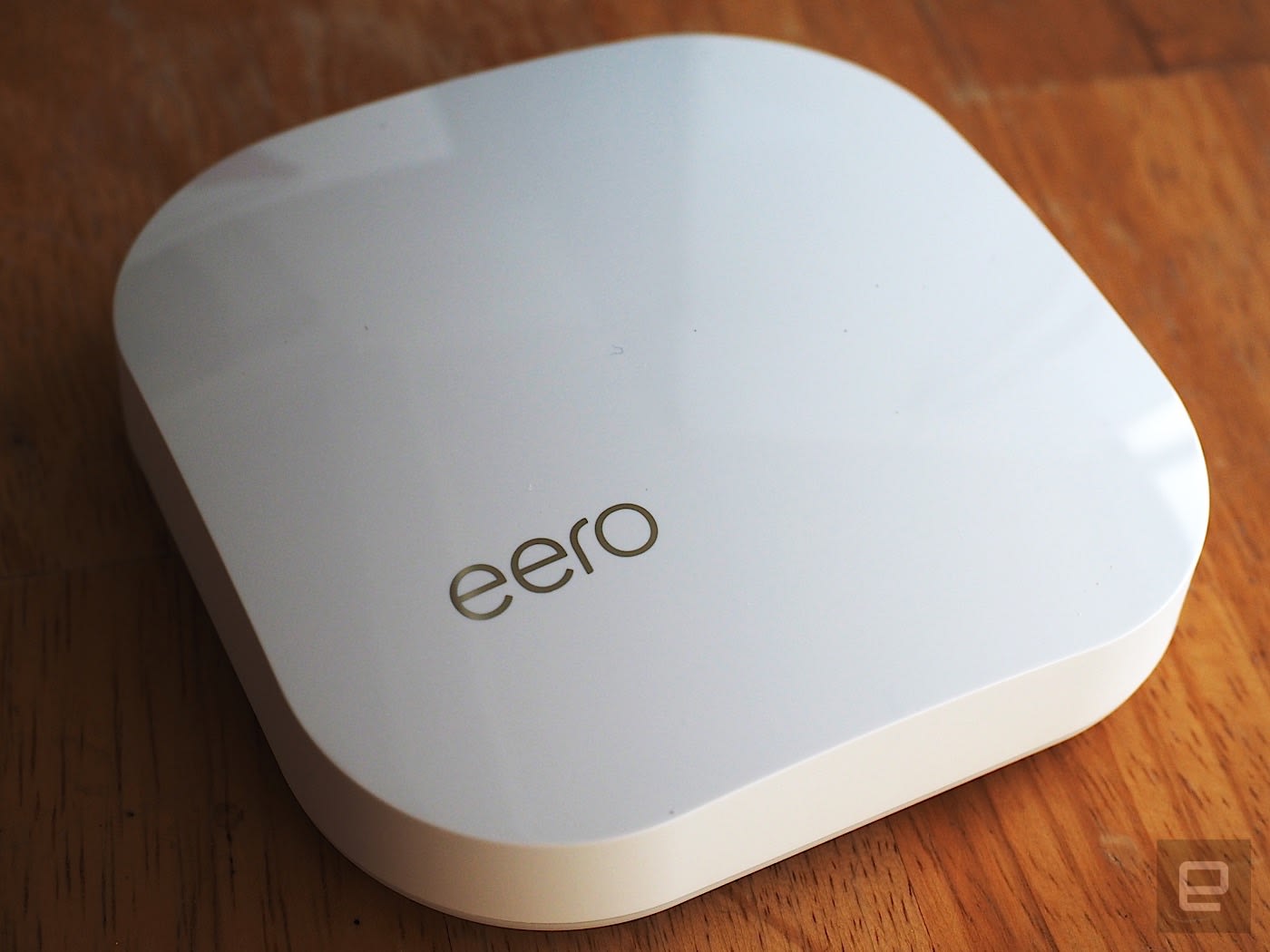 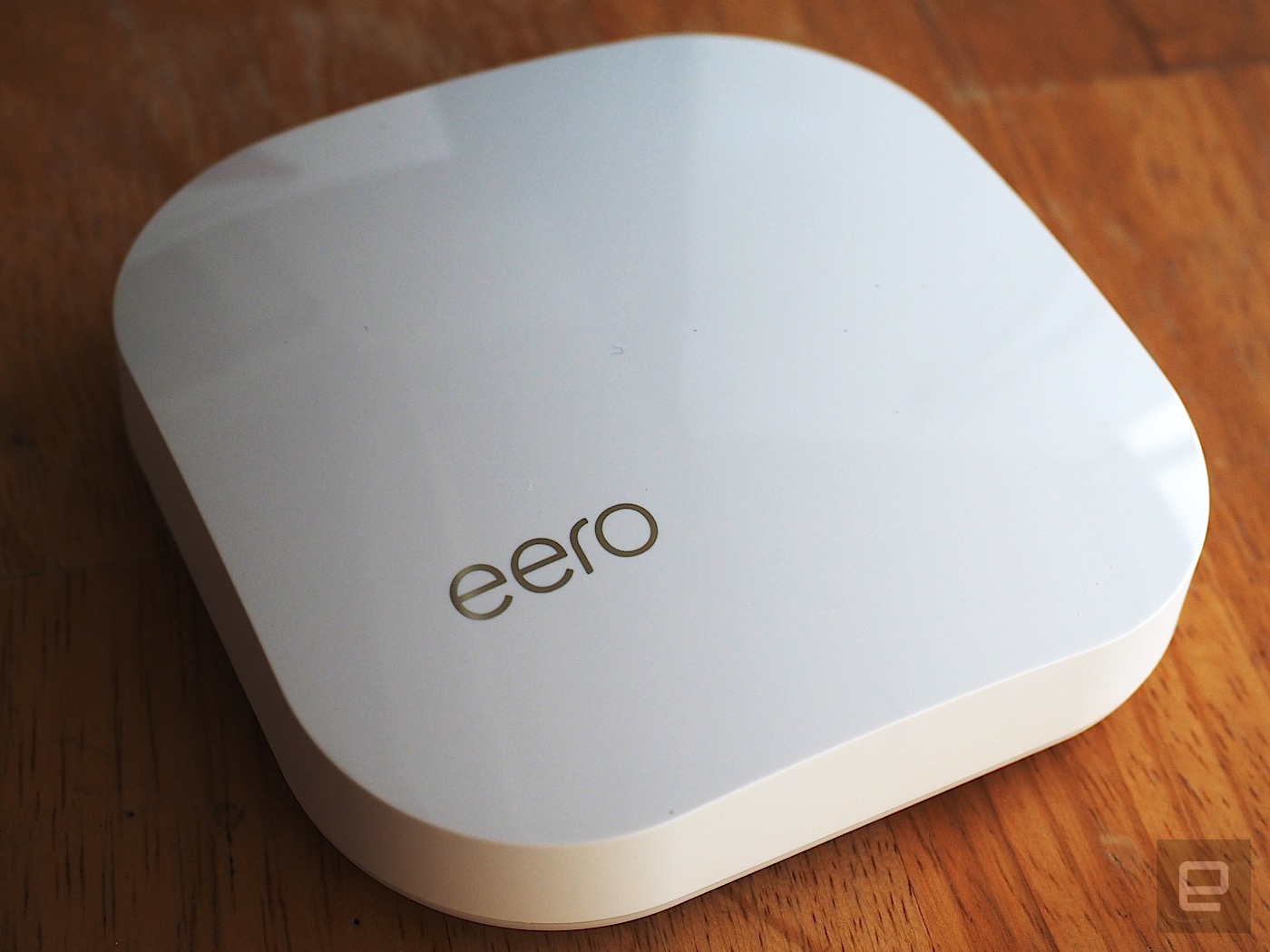 Let's face it: Your home WiFi network probably sucks. Or at least, it sucks enough that you'd much prefer to plug in directly to your router every time you get online. Except, of course, you probably can't. Like a lot of people, you likely have smartphones or tablets that depend on wireless connectivity. Or perhaps you have your router in your living room but your office is upstairs and you can't spare the cash to run gigabit Ethernet throughout the house. Last year, a company called Eero resolved to solve all of that. Instead of having just one router be the main WiFi hub for the whole house, the idea behind Eero is to use multiple hubs that talk to one another -- each Eero device does triple duty as a router, a range extender and a wireless access point -- essentially creating a mesh network for the home. That's why Eero offers its system as a pack of three (you can certainly get just one Eero too, but that wouldn't be using it up to its full potential). Today, the company is announcing that those initial pre-orders are finally shipping. And if you want to get one yourself, you can now order it from the company website as well as from Amazon later this week.

But Eero is expensive. A single unit is $199 while a three pack will cost you $499 (Pre-order prices were lower at $125 and $299 respectively). That's a lot of money to spend on a home wireless network, especially when you consider many routers and range extenders retail for under $100. Is it worth it? After several days putting the Eero to the test, I have to say that the answer is a loud and unequivocal yes. 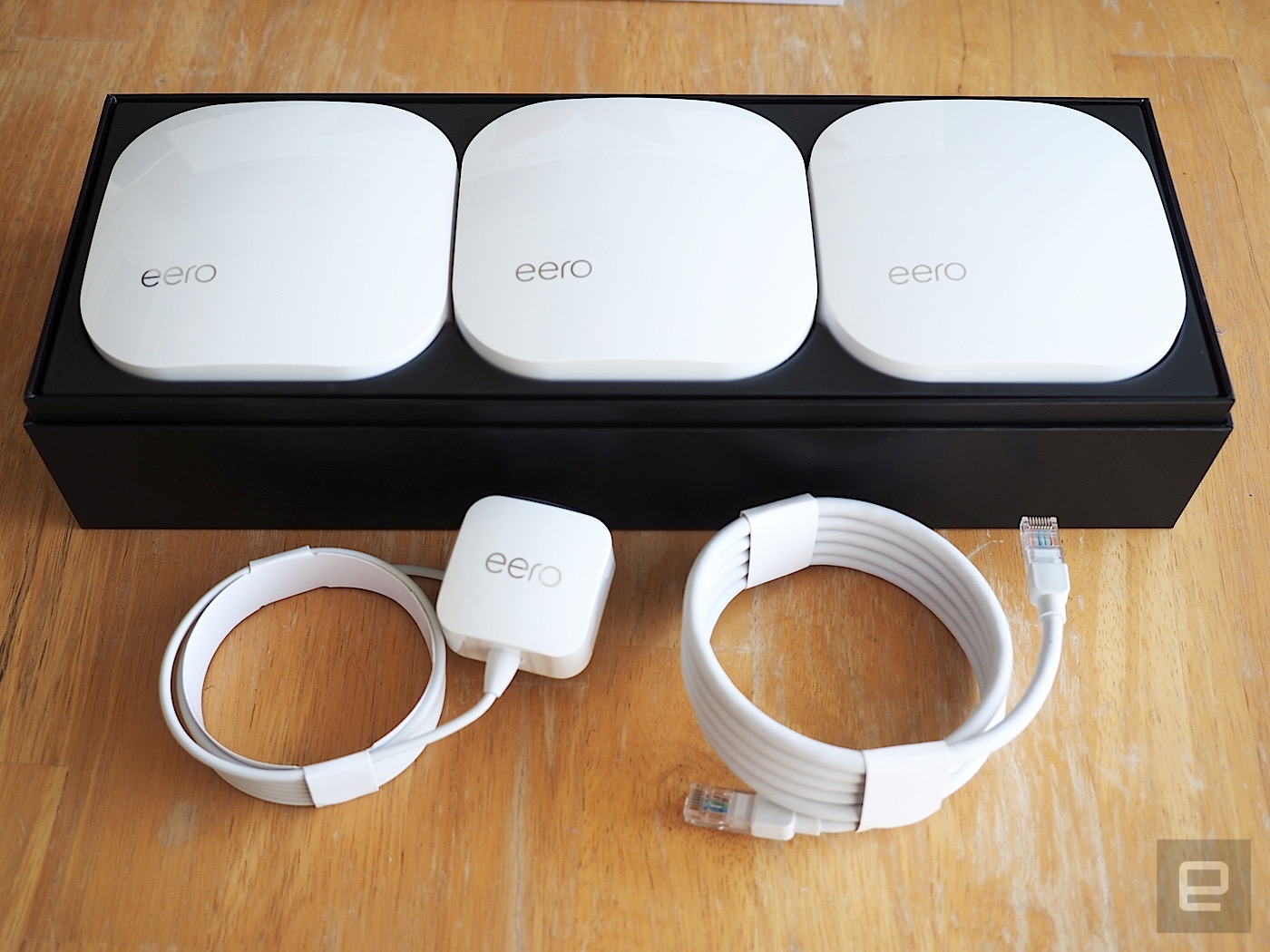 Before we get to its blistering speeds, let's start with just how cool this thing looks. For a device as boring as a networking hub, the Eero is a stunner. It has an elegant high-gloss curve on the top and a charmingly small footprint (measuring just 4.75 by 4.75 by 0.85 to 1.26 inches). I have no qualms displaying this out in the open, which isn't what I can say about most unsightly routers. That's actually part of the idea behind the Eero; because it's pretty enough to put out in front of furniture, it's much more likely to broadcast stronger signals in the first place. It's the same philosophy behind Google's OnHub router, and it's not a bad one.

Now the Eero does have only two Ethernet ports, which seems pretty limiting for a router, but as you'll see, I actually don't think that's too much of a downside. There's also a USB port, but that's strictly for diagnostic purposes at this point in time. As for the internals, it has a 1.0 Ghz dual-core processor, 512MB of RAM and 4GB of flash storage. It supports dual-band 802.11 a/b/g/ac (2.4 and 5 GHz).

Setting up your Eero network is pretty easy. To do so, simply download the Eero app (yes you'll need either Android or iOS to get your Eero going) and follow along with the installation instructions. You'll first have to create an account with Eero by adding your email address as well as your phone number. That sounds a little strange at first, but Eero CEO Nick Weaver tells me that the system uses these to send verification codes instead of having you set up an account password. "Most of our early users set very insecure passwords," he says, "and because this account controls your home network, we wanted it to be as secure as possible." 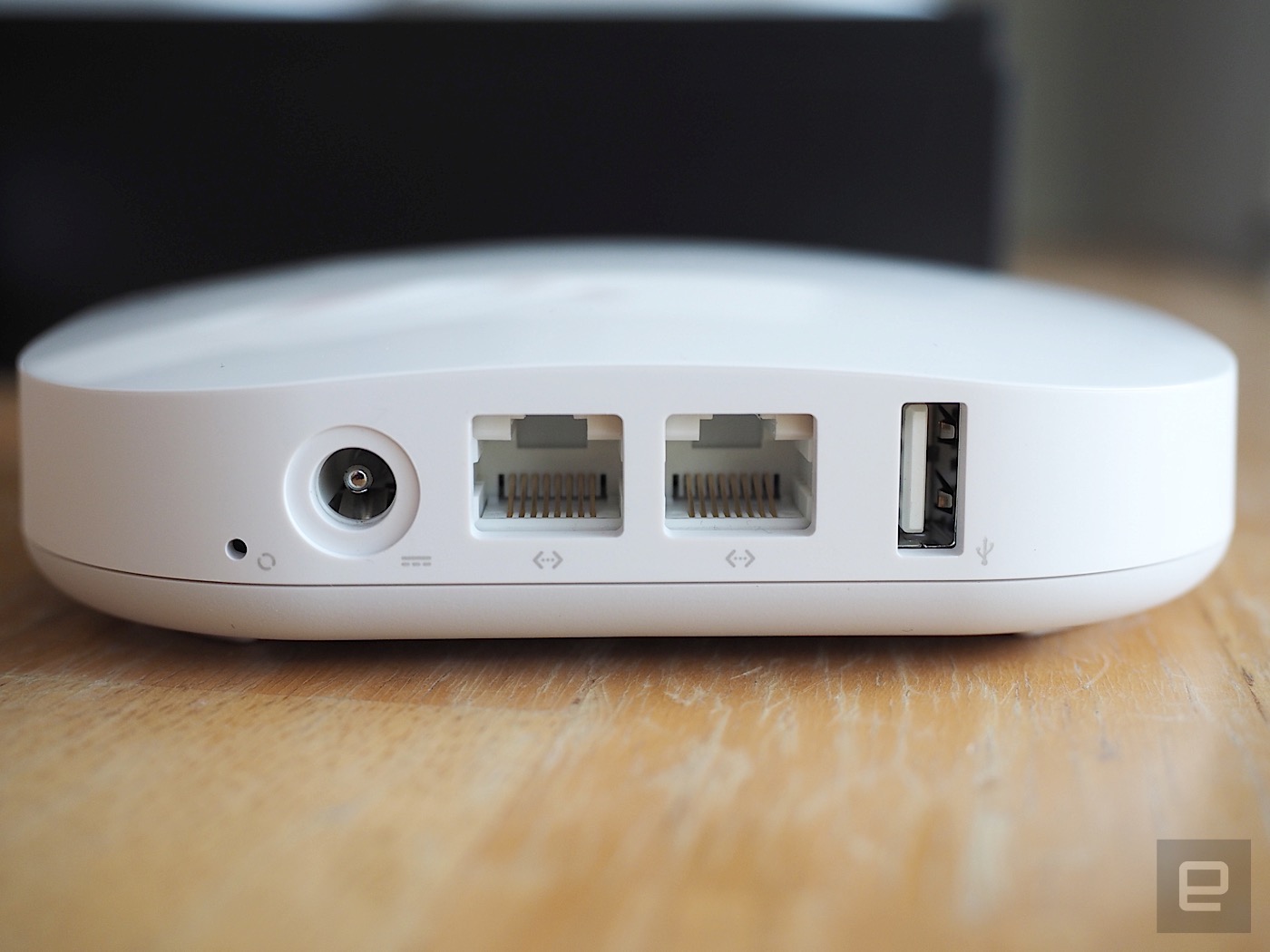 Then you plug the Eero into the modem like you would with a router. A light on the Eero will then flash blue, indicating that it's in pairing mode. Go ahead and tap Next to pair the device with your phone and then select the room it's in. From there, simply name your network, set up a password and voila -- you're up and running. The app is useful for pairing the Eero with your phone, of course, but it also makes it easier to set up additional Eero units throughout your house. Plug one in anywhere -- Eero suggests a distance of around 40 feet or so between units -- and the app will instantly find it and add it to the network.

Another cool feature is the ability to create a special Guest Network simply by enabling it on the app. You can text the login details to your friends and family when they're over for a visit right from the app itself. The app also lets you see how many devices are connected to your network. If you're a more advanced user, you can also check on all kinds of stats like DNS settings, assign IP reservations and port forwarding, and enable Universal Plug and Play for devices like game consoles and media centers.

Now onto the speeds. Oh, the speeds. This is where the Eero really and truly shines. Prior to trying out the Eero, I had both the Xfinity SMC modem / router as well as the Apple Airport Express. In a series of tests using the Speedtest.net application, both the Xfinity and the Apple router regularly pulled in download speeds of around 8Mbps and upload speeds close to 6Mbps. There were times in the day when I would luck out and get closer to 18Mbps on download, especially if I was within a few feet of either router, but it was a crapshoot. Worse still is when I tried to use the internet in one of the upstairs bedrooms (Our routers are located downstairs in the living room). There were times when I couldn't get signal at all, it was so bad. 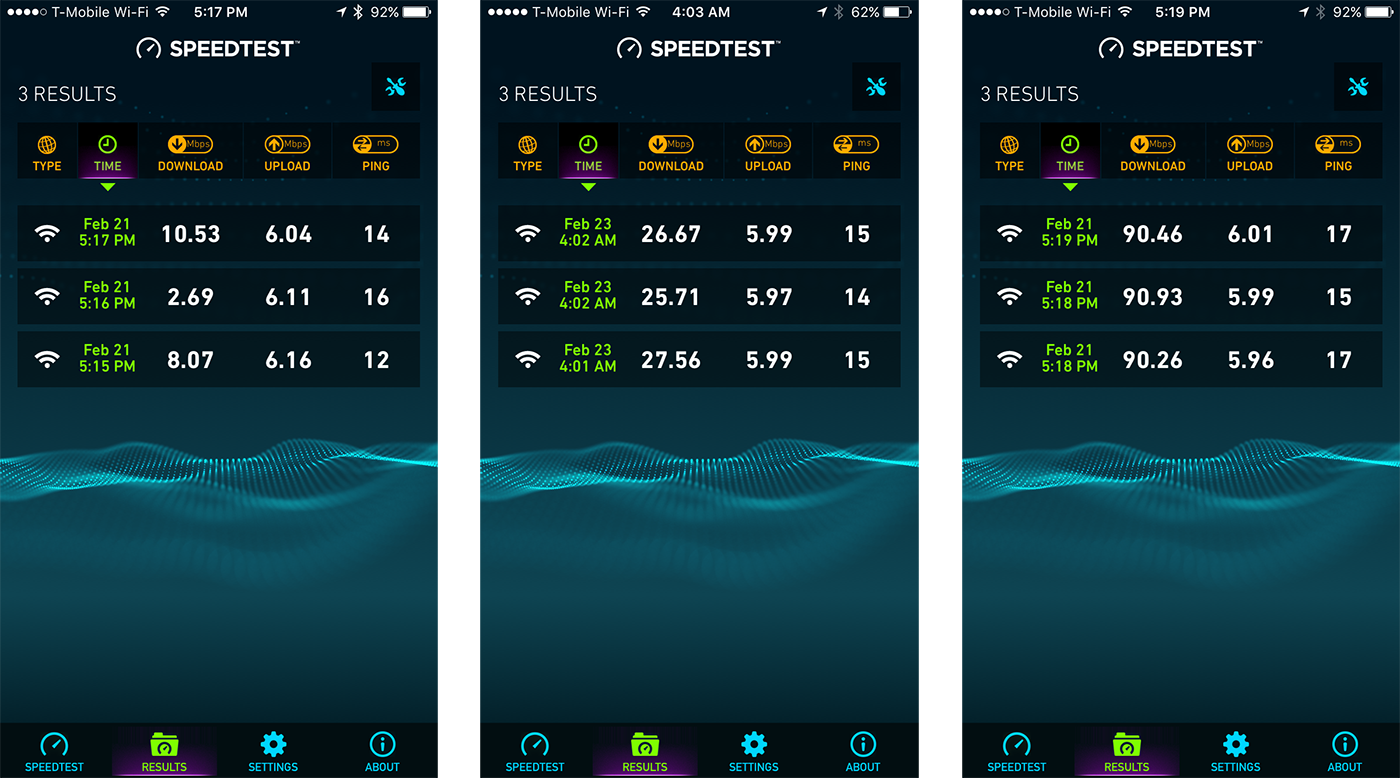 All speed tests were taken in the upstairs bedroom. From L to R: Apple Airport Express; One Eero downstairs; Two Eeros, one downstairs and one upstairs

But the Eero is a different beast altogether. Right from the get-go, I was getting average download speeds of 90Mbps (upload speeds were still around 6Mbps). 90Mbps! That's comparable to the kind of speeds I get when I plug my computer in directly into the modem. Thinking this was a fluke, I then tested the speeds in the corner of my bedroom that was notorious for being a WiFi dead spot. Here, the speeds dropped to an average of around 30Mbps, but that's still far better than I ever got with my existing routers.

The real magic occurred when I plugged and connected a second Eero in that same bedroom. All of a sudden, that 30Mbps average jumped right up to 90Mbps. I was amazed. This wasn't isolated to just the Speedtest app either. With the Eero, Netflix videos streamed immediately when it would typically take a few seconds of buffering. CNN.com loaded in 5 seconds instead of 10. Downloading a 5MB image took 2 minutes instead of 3. Regardless of the test I threw at it, the Eero outperformed the Airport Express and the Xfinity router handily every time. This is why I don't think it's a big deal that it only has two Ethernet ports. With WiFi speeds this good, you don't need wired connections as much.

"The magic happens when they all work together," says Weaver, explaining how the Eero works. "You get much faster and more reliable speeds, because your devices are much closer to the device that's broadcasting your WiFi. We also use two radios and special software so that you get one network name and better performance than using range extenders."

Now, as we mentioned earlier, the Eero isn't exactly cheap. You could get away with average speeds for half the price, and for most people, a 10Mbps connection probably works just fine. The Eero also isn't quite worth it if you're fortunate enough to not have any WiFi dead spots in your home. But if you do have areas in your home where the WiFi just won't reach and you've been struggling with lackluster wireless connectivity, then the Eero could just be the solution you're looking for. And hey, if getting the three-pack for $499 is a little too rich for your blood, try getting the single $199 unit to see if that's sufficient; you might find that it is.

For me, the combination of speed, looks, ease of use and, oh did I mention its speed, makes Eero worthy of your consideration. It certainly is for me.

In this article: eero, gear, meshnetworking, personal computing, personalcomputing, wifi, wireless
All products recommended by Engadget are selected by our editorial team, independent of our parent company. Some of our stories include affiliate links. If you buy something through one of these links, we may earn an affiliate commission.