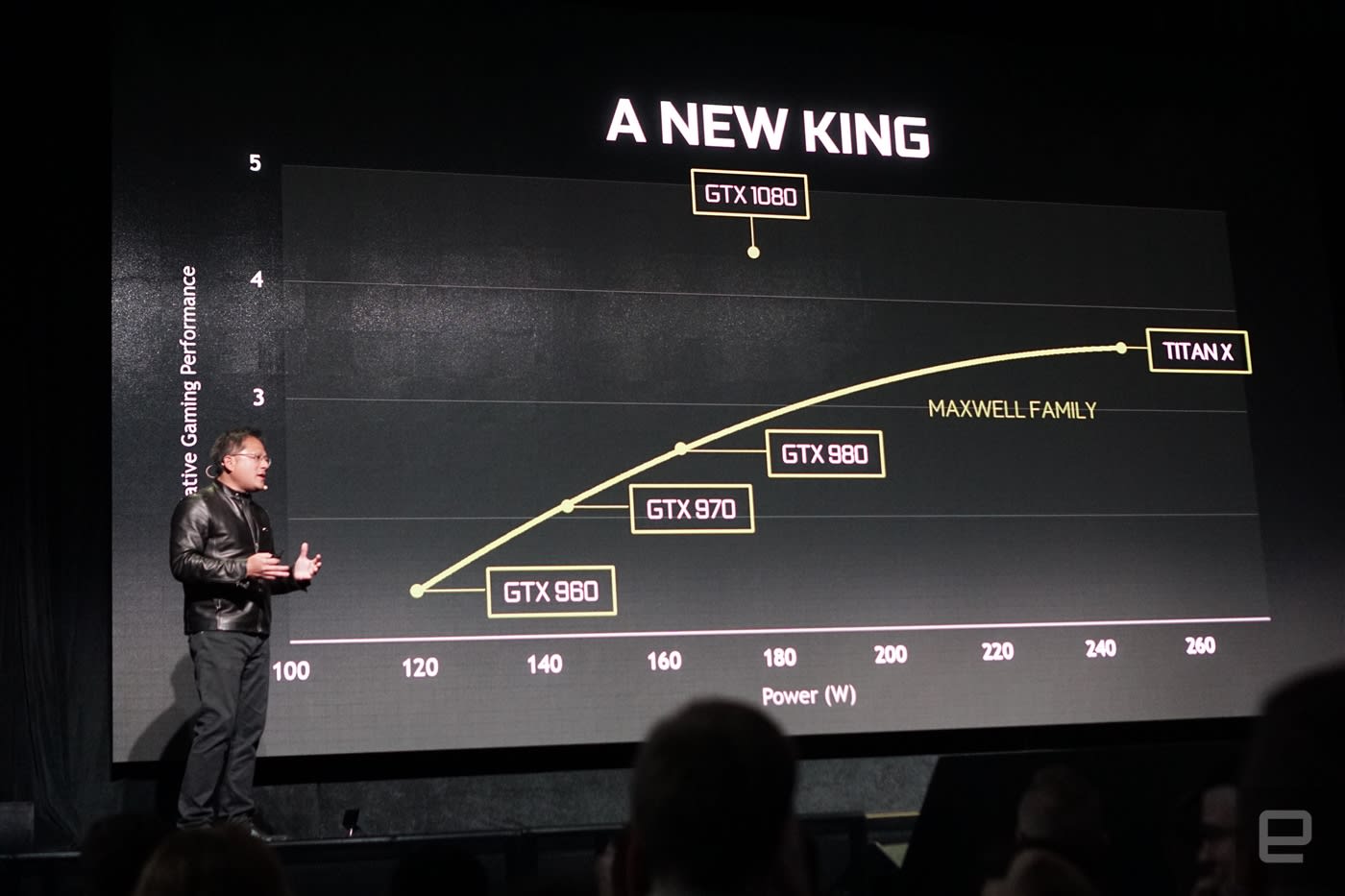 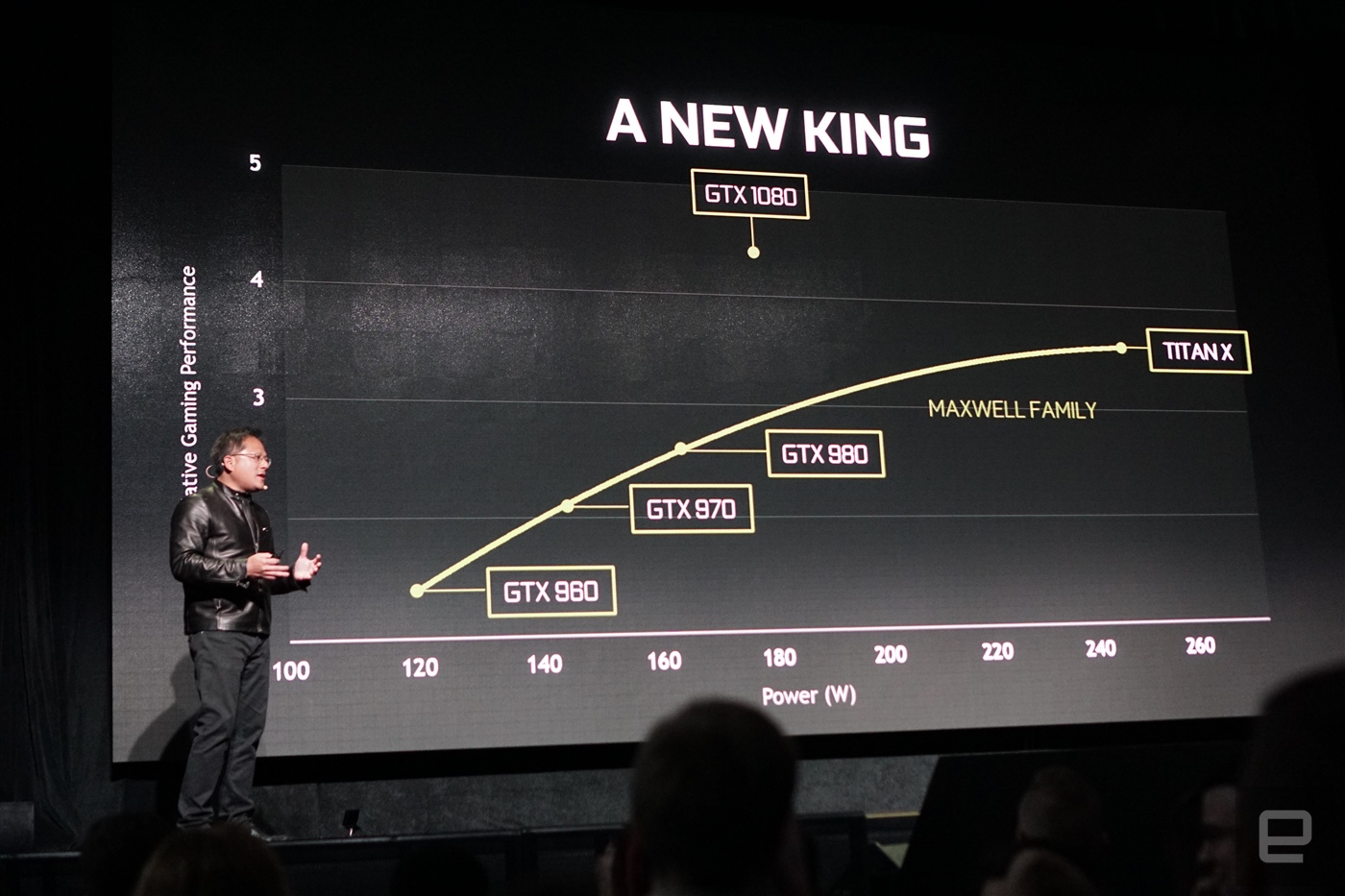 NVIDIA gave us a taste of its new Pascal architecture with the P100 graphics card last month, which is aimed at servers for heavy duty computing. Now, it's ready to show off how that technology will be adapted for consumers with its new GeForce GTX 1080 GPU. As you'd expect, it's fast: NVIDIA CEO Jen-Hsun Huang revealed that it's faster than its current performance king, the $1,000 Titan X, as well as three times as power efficient. That's particularly impressive since it's the successor to NVIDIA's GTX 980, which retails for around $600.

The 1080 is also faster than two GTX 980 cards running together using SLI technology. Like the P100, it's built with a new 16nm FinFET (a type of 3D transistor) manufacturing process, which makes it more power efficient, on top of just being faster.

The GTX 1080 is the "largest GPU endeavor, largest chip endeavor, largest processor endeavor, in the history of humanity," said NVIDIA CEO Jen-Hsun Huang. He added that the R&D budget for the new card was "several billion dollars" over the span of more than two years. "I'm pretty sure you can go to Mars [for that]," he said. 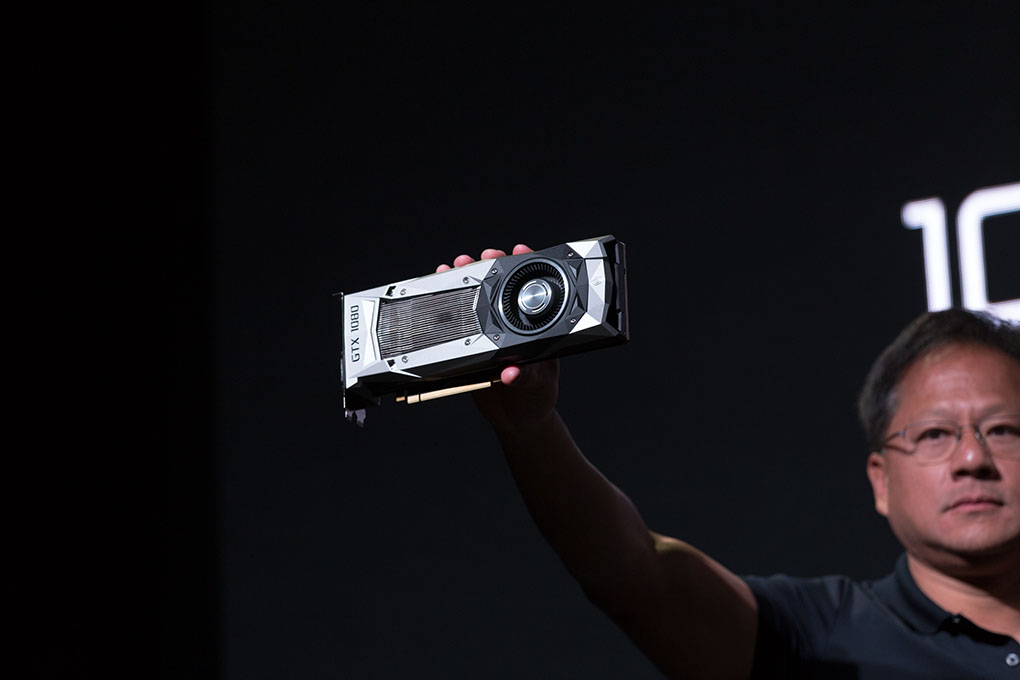 NVIDIA is basically positioning the GTX 1080 as the gamer's dream card. Prior to its unveiling, Huang showed off several new titles like The Division and Rise of the Tomb Raider running at max settings in a high resolution over 60 frames per second. He later revealed that all of the games were running on the new card, to the delight of the entire crowd.

A demo of Epic's Paragon made it clear just how fast the 1080 is. When Huang pulled up the GPU's stats, it was running at 2.1 GHz and the memory was running at 5.5 GHz. That's faster than any GPU today, except for one of its last generation cards with liquid nitrogen cooling. Most remarkable? The 1080 was just just relying on air cooling. It was running at 67 celsius, which I initially thought was a bit high based on video cards I've had in the past. But I was judging based on idle temperatures -- video cards today typically reach around 65c under load.

Among other new technology, the 1080 offers "simultaneous multi-projection," which helps games look less distorted for triple monitor setups or ultra-wide 21x9 screens. It also makes the card more efficient at VR rendering (which is far less forgiving about low frame-rates). Huang says the 1080 is twice as fast as the Titan X when using the multi-projection feature to render VR.

The GTX 1080 will be available for $599 on May 27, and you can also snag a special NVIDIA-designed "founders edition" for $699 (which looks like it includes a stylish new cooler). Almost as an afterthought, NVIDIA also revealed that the GTX 1070 is coming on June 10 for $379 (the founders edition will run you $449).

NVIDIA didn't have too many technical details to share about either card, but it gave out a few stats: The 1080 pumps out 9 teraflops and packs in 8GB of Micron's new GDDR5X RAM. The 1070, which is also faster than the Titan X, spits out 6.5 teraflops and also has 8GB of RAM (though that one is running GDDR5 tech). For the smart gamer, it sounds like the GTX 1070 will be a pretty good deal (just like the 970 was).

But of course, NVIDIA won't be alone with new hardware this year. AMD is expected to debut new cards with its Polaris technology this summer, which will focus on power efficiency as well. It sounds like Polaris is better suited for gaming laptops at the moment, but it could also be a way for AMD to deliver some powerful cards that you can actually afford (think under $300).

In other NVIDIA news today, it also announced a camera for in-game photography, Ansel, as well as technology that makes VR sound feel more realistic.

Source: GeForce.com
Coverage: NVIDIA (YouTube)
In this article: Ansel, gadgetry, gadgets, gaming, gear, GeForce, GTX1070, GTX1080, nvidia, pascal, video, VRWorks
All products recommended by Engadget are selected by our editorial team, independent of our parent company. Some of our stories include affiliate links. If you buy something through one of these links, we may earn an affiliate commission.