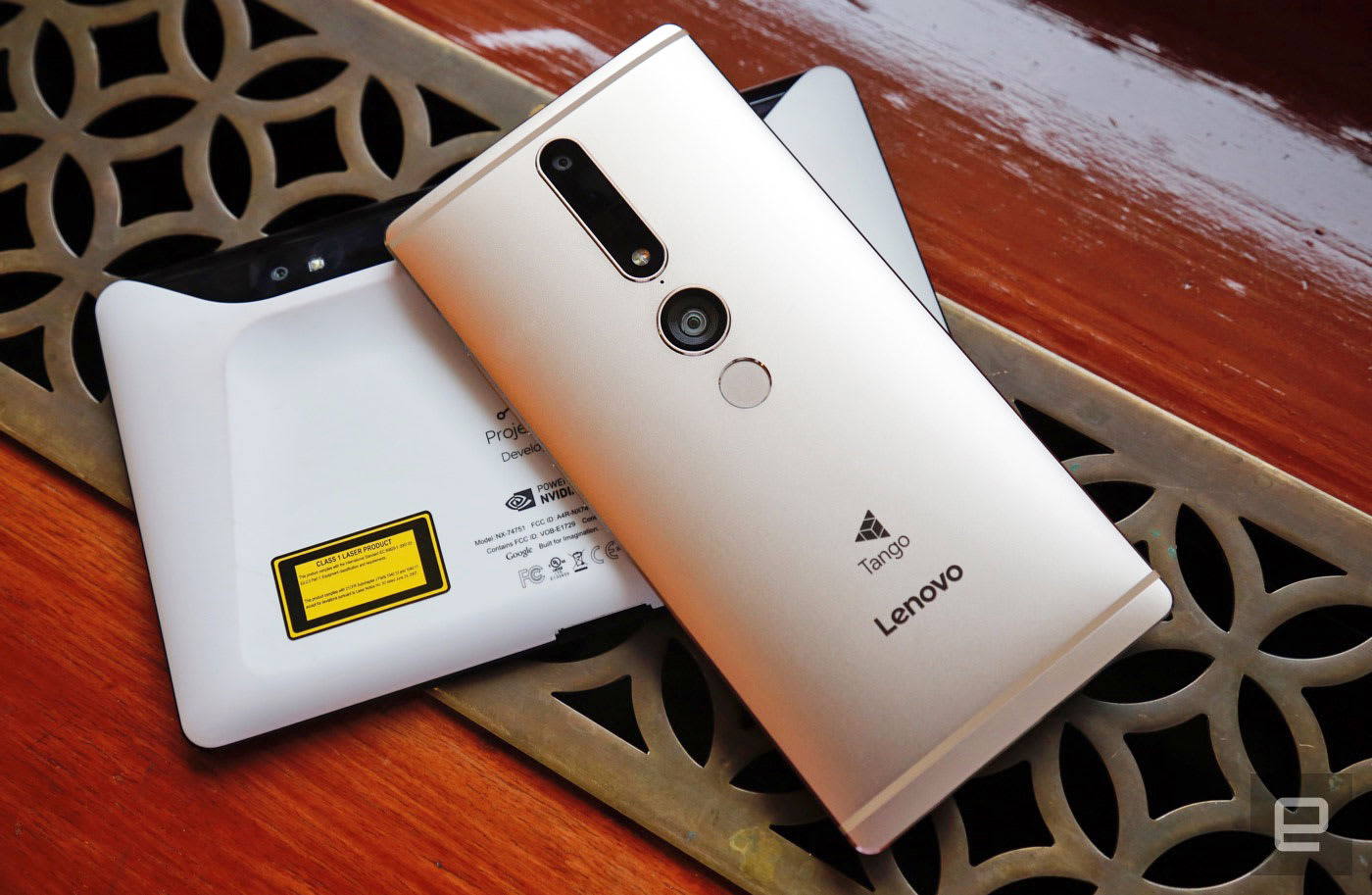 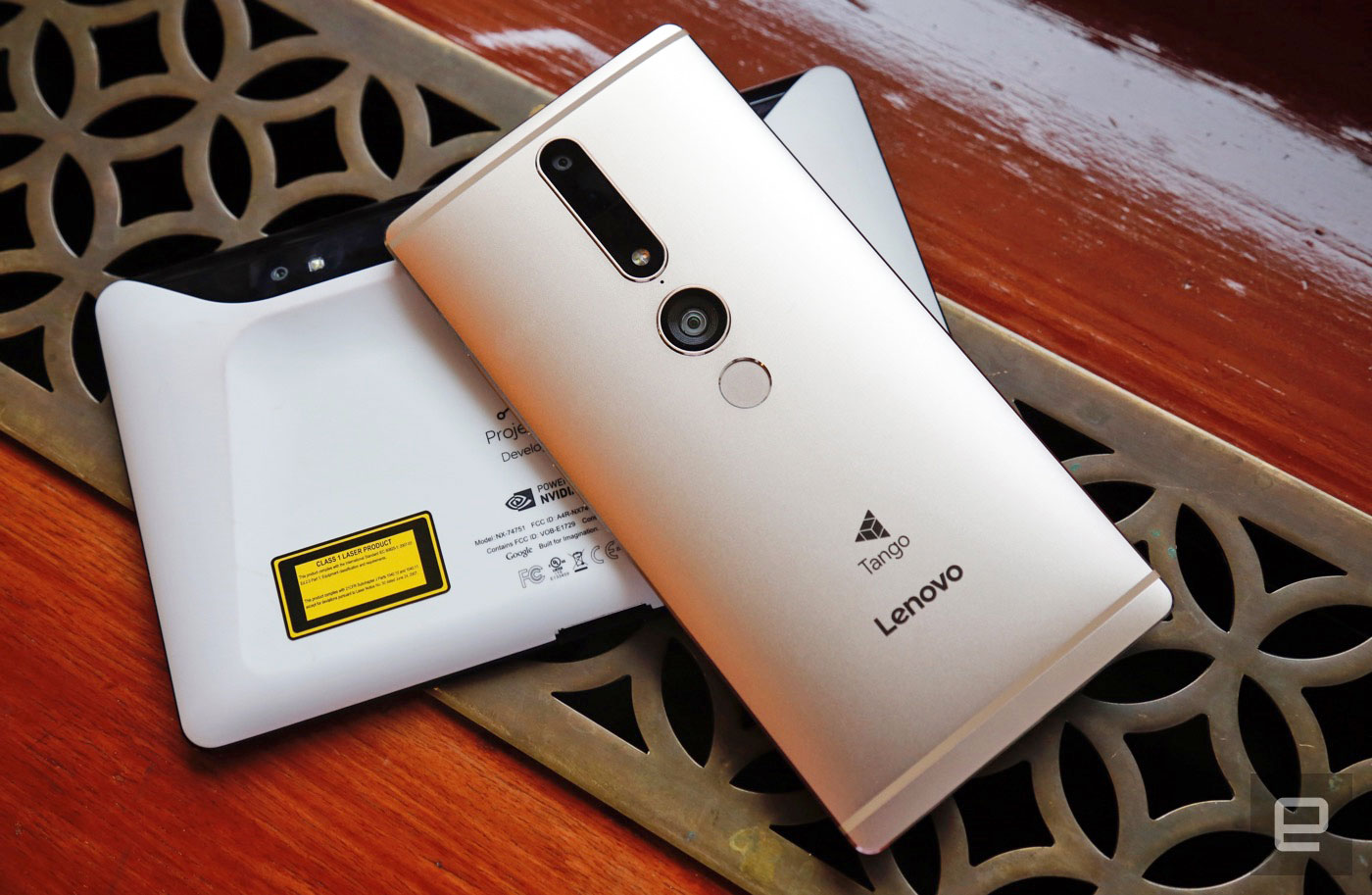 For years now, we've watched Google build gadgets that sense the world around us, and for years we've wondered when the non-coding public could actually use them. That time is, well, not now but soon. Lenovo unveiled the Phab2 Pro earlier today, a smartphone whose name completely fails to illustrate its potential importance: the very first phone using Google's Tango 3D mapping technology that a regular person can actually buy. It doesn't arrive until later this summer, but after spending a little time with the device, I'm already cautiously optimistic about its potential.

By now, you probably know the broad strokes about Tango: It's a suite of technologies that combines computer vision, motion tracking and depth perception to help a device figure out exactly where it is and how it's moving through space. So far, the Tango foundation has been used, among other things, to give us turn-by-turn directions inside a museum and let us play with virtual puppies. In short, it's a big deal. But what's the first Tango phone actually like? 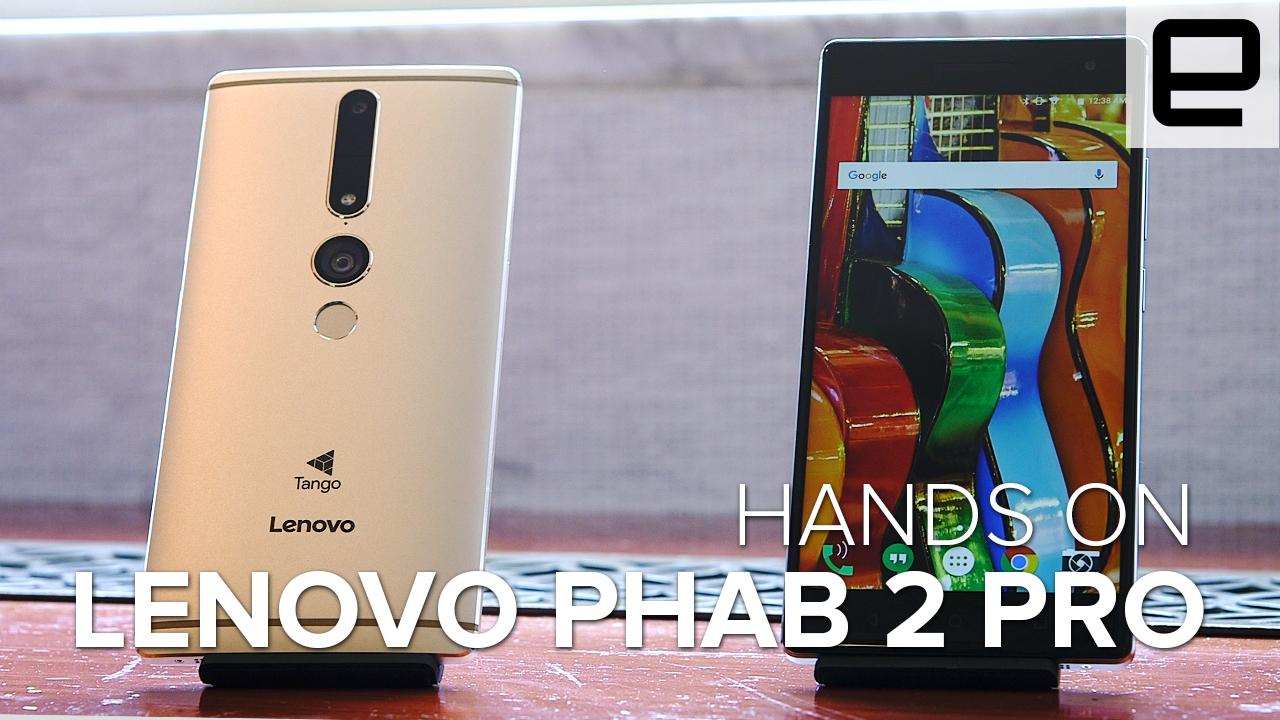 For one, it's enormous. The Pro features a 6.4-inch Quad HD IPS screen that will stretch pockets and hands alike. In fact, the phone is so big that the thought of using it as my daily driver is just absurd. We've seen huge phones before -- here's looking at you, Xperia Z Ultra -- but the Phab2 Pro is less of a big handset than it is a small tablet. That shouldn't come as a surprise, either. Google's Tango developer unit is a 7-inch tablet, so for now there seems to be a limit to how small a Tango device can be. That's partly thanks to the 16-megapixel camera, depth sensor and motion-tracking sensor Lenovo had to squeeze into the Phab2 Pro to make it as spatially aware as it is. 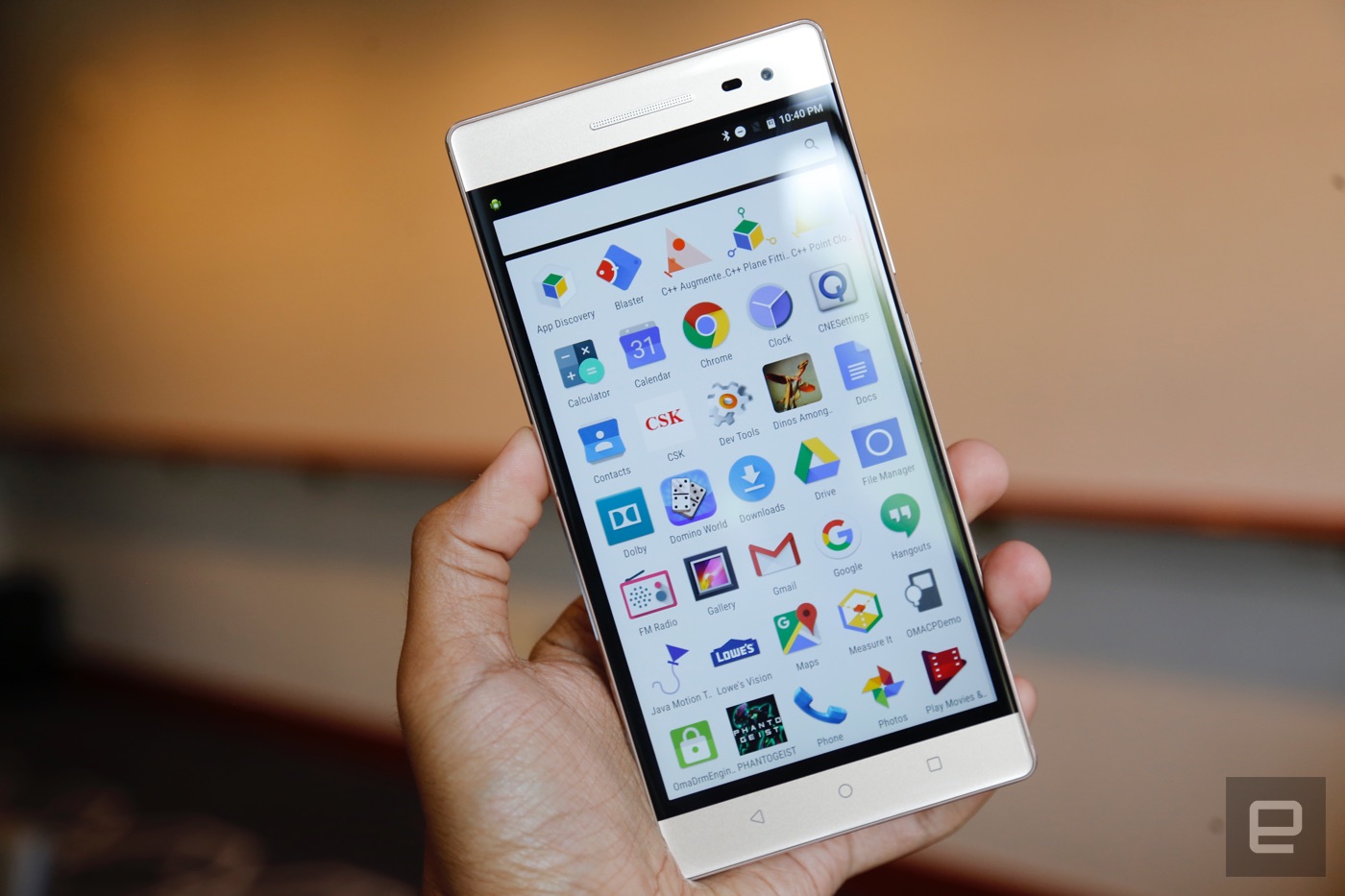 So yes, it's big. It's surprisingly well built too. Its metal body, slim profile and 2.5D curved-glass face make it feel an awful lot like Huawei's Mate 8. The surprises continue when you peer inside the phone. While most of the Android devices making headlines lately have high-end Snapdragon 820 chips, the Phab2 Pro has a quad-core Snapdragon 652 processor augmented with some special Tango hardware. Also onboard are 4GB of RAM, 64GB of storage and a 4,050mAh battery for good measure. Beyond its sheer size, the Phab2 Pro's physical package doesn't leave much to be desired -- proof that Lenovo can build a handsome flagship without Motorola's help.

For all the hardware needed to make augmented reality work, the future of Tango depends almost entirely on software. The Phab2 Pro will ship this year with a mostly clean version of Android 6.0 (a trick it picked up from Motorola), but that's not what I'm talking about. Developers, from inside Google and elsewhere, will decide Tango's fate. Unfortunately, most of the Tango app demos I got to play with were ones I'd seen in the past. Blaster, for example, lets you take on oncoming alien hordes while Woorld acts as a sandbox where you can build cutesy, absurd realms. Still others aim for practicality, like an app from Lowe's that lets you virtually place a full-sized fridge into your kitchen to see if anything clashes. And, of course, apps can turn the Phab2 Pro into a mean museum-navigating machine as I demonstrated earlier this year. 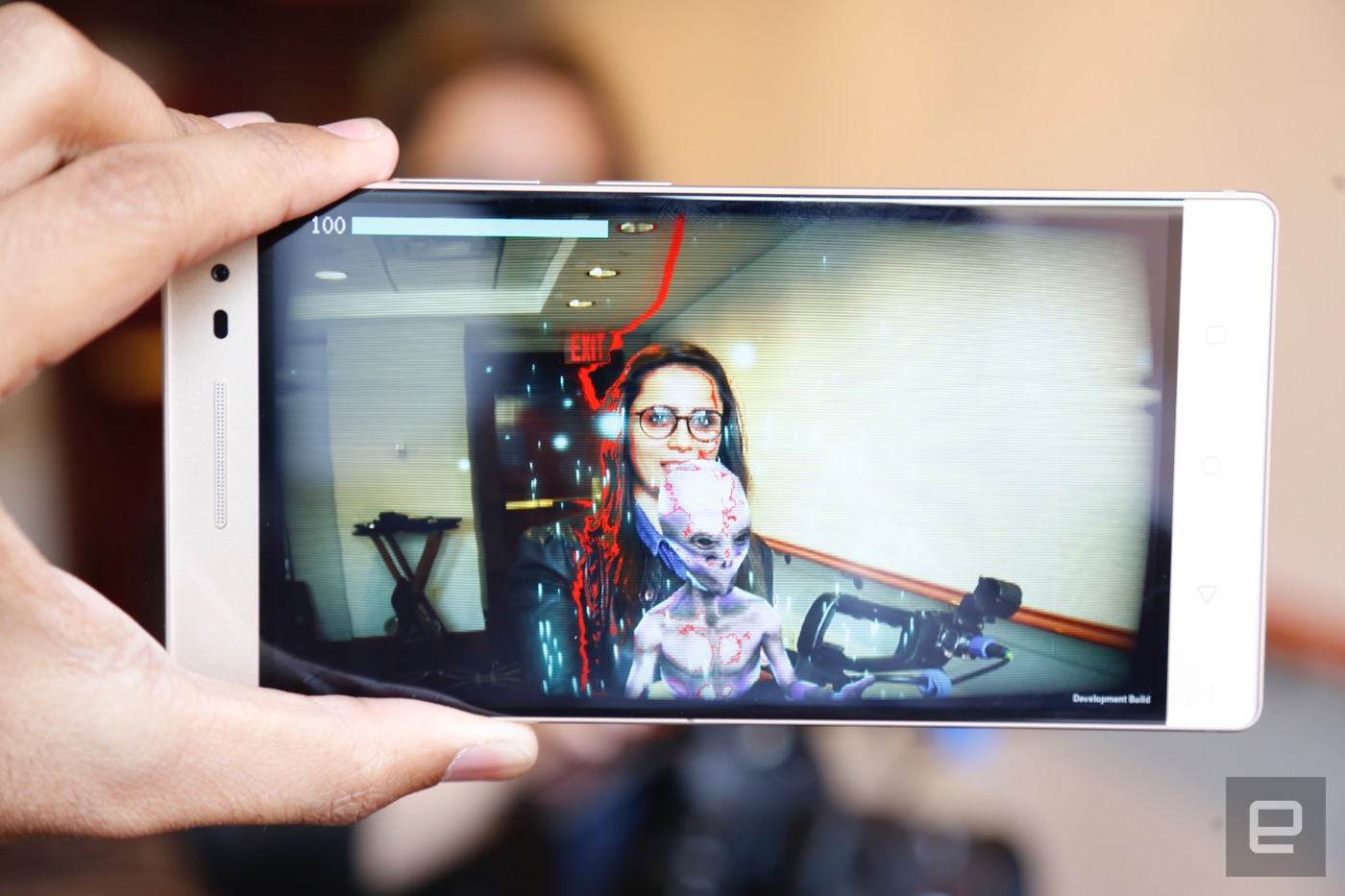 Make no mistake: The device I spent time with was far from perfect. Lenovo's physical design and production processes are on point, but the software I handled was "not final" -- PR parlance for "it's going to crash a lot." And it did. As such, I couldn't get a great sense of how fast the phone actually is. It seemed quite snappy -- when apps decided not to suddenly force-close, that is. Even so, that pesky technicality couldn't wipe the grin off my face as I placed a Tyrannosaurus Rex into a small room and toppled two-legged mechs while my colleagues laughed at me. When Lenovo's hardware and software worked as they should, I got a glimpse of a future for phones, and the future excited me.

Questions about Lenovo's chances for smartphone success in the U.S. and Tango's long-term viability can and will persist. (Side note: Lenovo says it has about a six-month head start on any other phone makers who want to build a Tango device.) What's exciting -- intoxicating, even -- is the idea that this $500 phone could completely change what we expect from our smartphones, and indeed, change how we use them to perceive the world around us.

In this article: android, gear, google, hands-on, lenovo, mobile, motolenovo2016, phab2pro, projecttango, smartphone, tango, video
All products recommended by Engadget are selected by our editorial team, independent of our parent company. Some of our stories include affiliate links. If you buy something through one of these links, we may earn an affiliate commission.