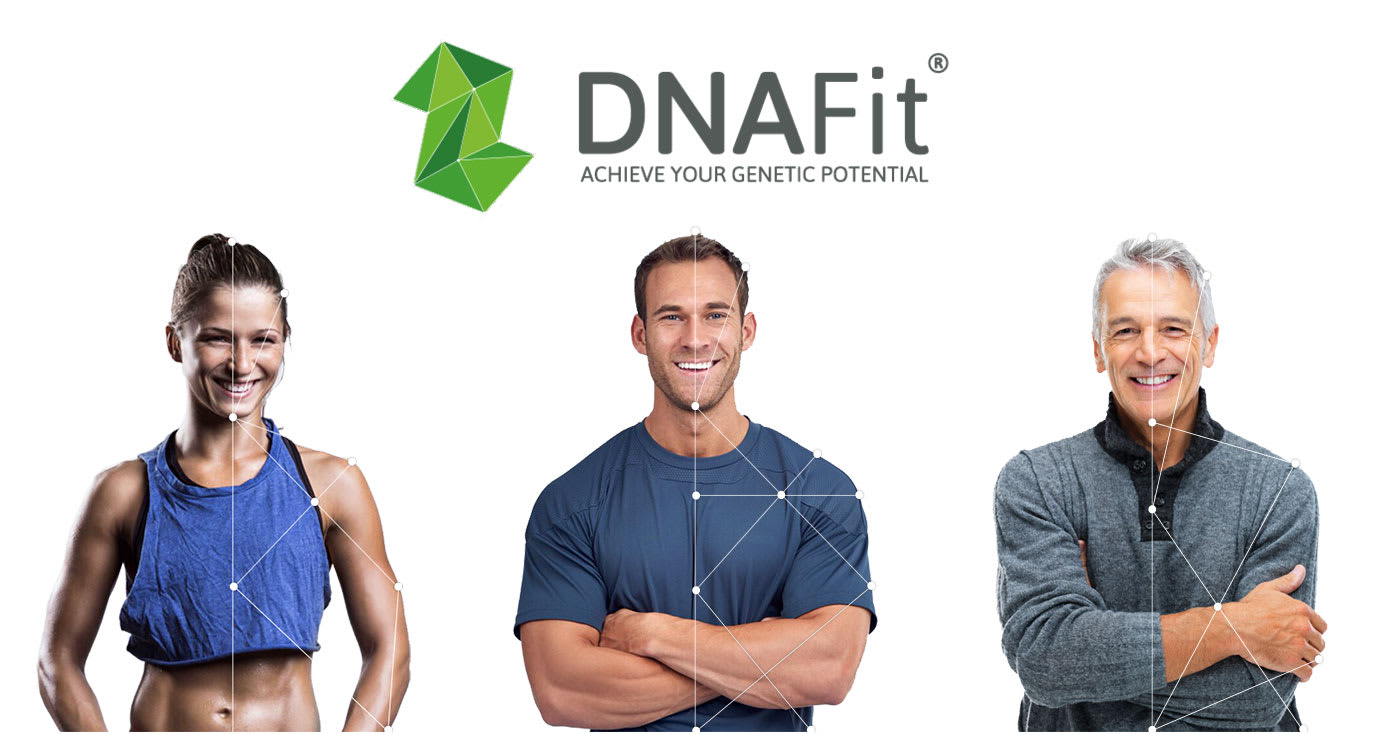 There are times in your life when bad news smashes into your gut like a sledgehammer into the solar plexus. "You've got those double dots next to your CYP1A2*F, which means that we class you as a fast metabolizer." But the man on the other end of the phone was not complimenting me. Rather, he was explaining that my body can't cope with the chemicals produced by smoked or chargrilled meat. It meant that, despite my love of meat, I would have to limit myself to "just one or two servings of grilled or smoked meat per week," and even that was excessive. The news got worse when I was told that, for a similar reason, I should also avoid fried bacon -- which I eat every morning to pep up my protein-and-fat rich breakfast of eggs. My genetic makeup, the bastard, has rendered me incapable of enjoying bacon, which is a hard way to be introduced into the world of DNA fitness testing.

Every cell in your body contains DNA -- a series of instructions, like computer code, that tell your body how to behave. It dictates everything from the color of your eyes and height through to how long you've got left to live. Between 1990 and 2013, a coalition of countries mapped the human genome, opening new frontiers into biological research. Companies such as 23andMe and DNAFit were then able to leverage this knowledge to bring nuggets of insight out of the lab and into our homes. DNAFit's service is primarily designed for athletic types looking to secure those mythical marginal gains; small improvements that give you an edge over your competitors. But there's no rule against schlubby tech journalists trying it out, so I signed up with DNAFit to find out if my genes held the key to me becoming a healthier person.

The process begins with you rubbing a cotton swab inside your cheek for a minute, sealing it in a plastic tube and sending it off to the lab. After a few weeks, you'll receive a link to the company's website that, depending on the package you choose, offers insights into your diet and/or exercise. I opted for a package that included an analysis of both, as well as a consultation with one of the company's experts -- specifically, Craig Pickering, a former international athlete who has represented Britain as both a sprinter and a bobsledder. Previously considered a hot prospect for medals at both London 2012 and Sochi 2014, a series of back injuries forced him to retire in 2014. 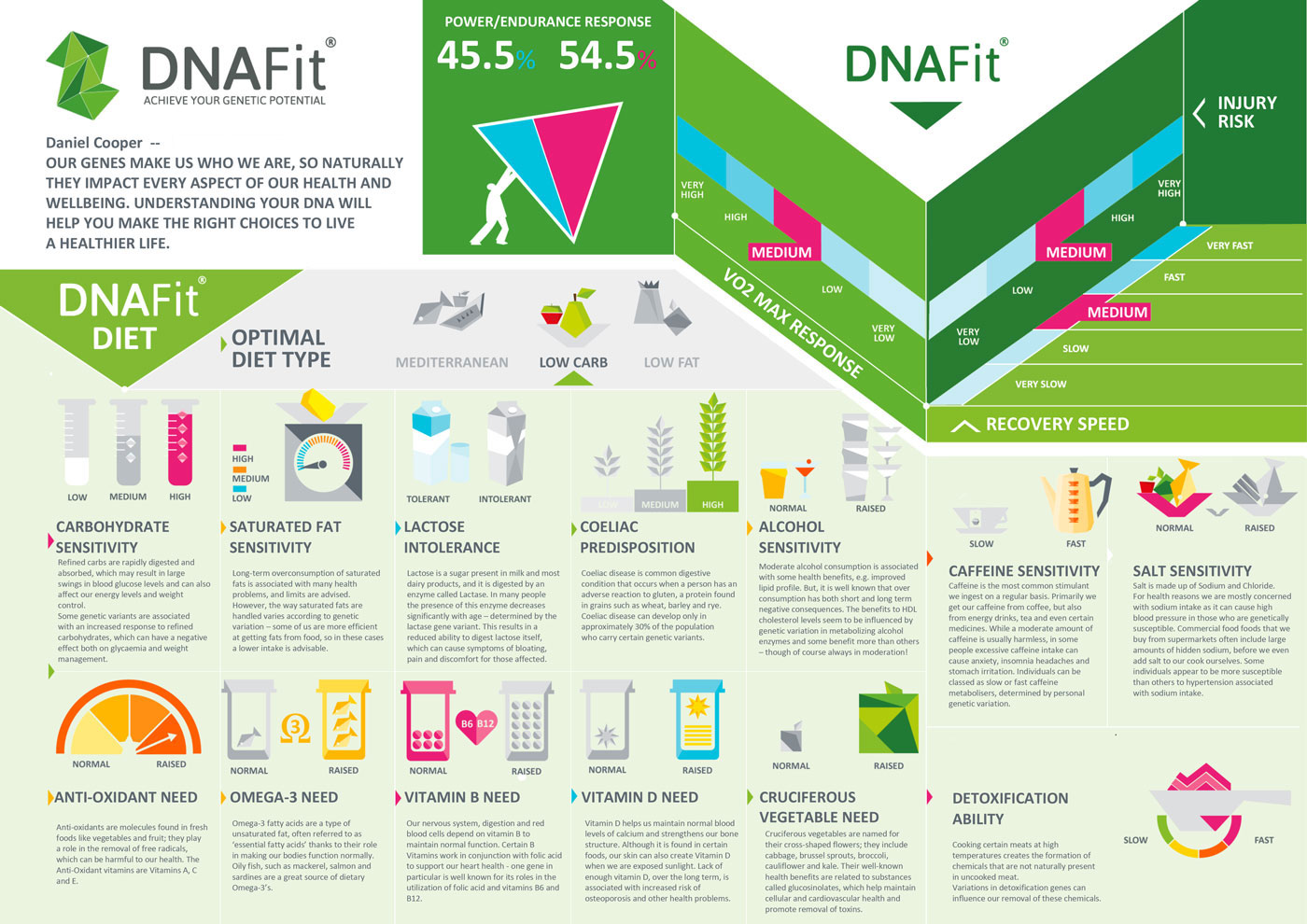 Pickering patiently went through my results, explaining what they meant and what I can do differently. I learned that there are roughly three types of athlete a person can be: endurance, power or mixed. About 25 percent of DNAFit's clients turn out to be endurance athletes: people whose bodies can deal with the lengthy pain of climbing a mountain or running a marathon. Another 25 percent are power athletes, better at sprinting over short distances and power lifting. The remaining 50 percent are more balanced, with my makeup coming out at 45.5 percent power and 54.5 percent endurance. It meant that my weight-heavy workout was good, but I needed to work with my personal trainer to get in more endurance exercises.

In other areas, my body is crushingly middle of the road, with a normal lung capacity and a fairly standard 48-hour turnaround on post-exercise recovery. As for injury risk, my genes suggested that I was at greater risk of soft-tissue damage. But beyond that, I shouldn't have to worry about devoting lots of time toward injury-prevention work, simply because I'm quite robust. That was in stark contrast to Pickering himself, whose own injury results were some of the most extensive the company had ever seen. But I was safe to do three intensive workouts a week, with at least a day of rest between each one.

We then moved on to my diet profile, which is where the bad news kicked in, since my body is deficient in a wide variety of areas. For instance, I have a predisposition to celiac disease, with a 1 in 35 chance of actually suffering from the condition -- greater than the average of 1 in 100. It's a similar situation with carbohydrates, with both my ACE and PPARG genes showing signs of extra sensitivity. If that wasn't bad enough, I lack the gene that produces the GSTM1 enzyme, meaning that I struggle to process carcinogens and free radicals, making me prone to oxidative stress. Which, in layman's terms, means that I'm more likely to get Parkinson's, Alzheimers and cancers than other people.

The section in my DNAFit report explaining my genetic failings with regards to meat.

Writer Michael Pollan once coined a very brief, useful manifesto for how one should go about dieting: "Eat food. Not too much. Mostly plants." It's the rule of thumb that everyone in the world knows to be true, yet so many of us struggle with. If you've read Engadget over the last five years, you may have followed my journey from being a 20-stone lump to a slightly thinner lump. But despite knowing that there was more that I could be doing, when it's laid out in front of you, it's hard to take.

So, I resolved that I need to make some severe lifestyle changes in order to compensate for my body's staggering flaws. The advice here was, perhaps, a little more generic than genetic, since around 98 percent of DNAFit's customers are recommended one of two diets. Either they're prescribed a Low Carbohydrate plan, or a Mediterranean, both of which recommend a low-carb, low-meat diet and lots of fresh vegetables and, especially in my case, cruciferous greens to fill in on what my body doesn't produce.

I had to ask Pickering for the justification of splashing out on a DNAFit test when I could just as easily have binged on kale. He says that when it comes to genetically matched diets, "people find them slightly easier to stick to." That's mostly because they feel that the diet has been "personalized to them," although really it's the opposite. Diet advice like this is available in plenty of other books -- it's the warning of what happens if you don't change that's more compelling.

"It's the warning of what happens if you don't change that's more compelling."

A few days later, I sat down with DNAFit's founder, Avi Lasarow, who says the diet advice isn't as generic as I'd suspected. After all, the company predominantly operates in the UK, where genetic factors would be common to British Caucasians. In other locations where there are cultural variations in diet, such as Holland and Latin America, Lasarow told me the eating advice would be different.

I also wanted to ask what he'd say to people who are skeptical about the potential for genetic science to affect people's dieting. His commitment to pushing his business includes the publishing of clinical trials and funding research into furthering the technology. He's also certain that it won't be long before DNAFit can offer a much broader quantity of tests in the hope of saving people the "tedious trial and error" inherent in working out what's best for you.

At the moment, DNAFit tests for a limited number of "snips," or single nucleotide polymorphisms (SNPs). These tiny variations in our DNA are key markers that show our vulnerability to various conditions, such as sickle-cell anemia. But Lasarow says eventually his company, and others like 23andMe, will be able to examine 800,000 of these characteristics at a time. That opens up a whole new frontier of testing opportunities, and those who have already been tested will be able to learn more things about themselves for an additional cost. 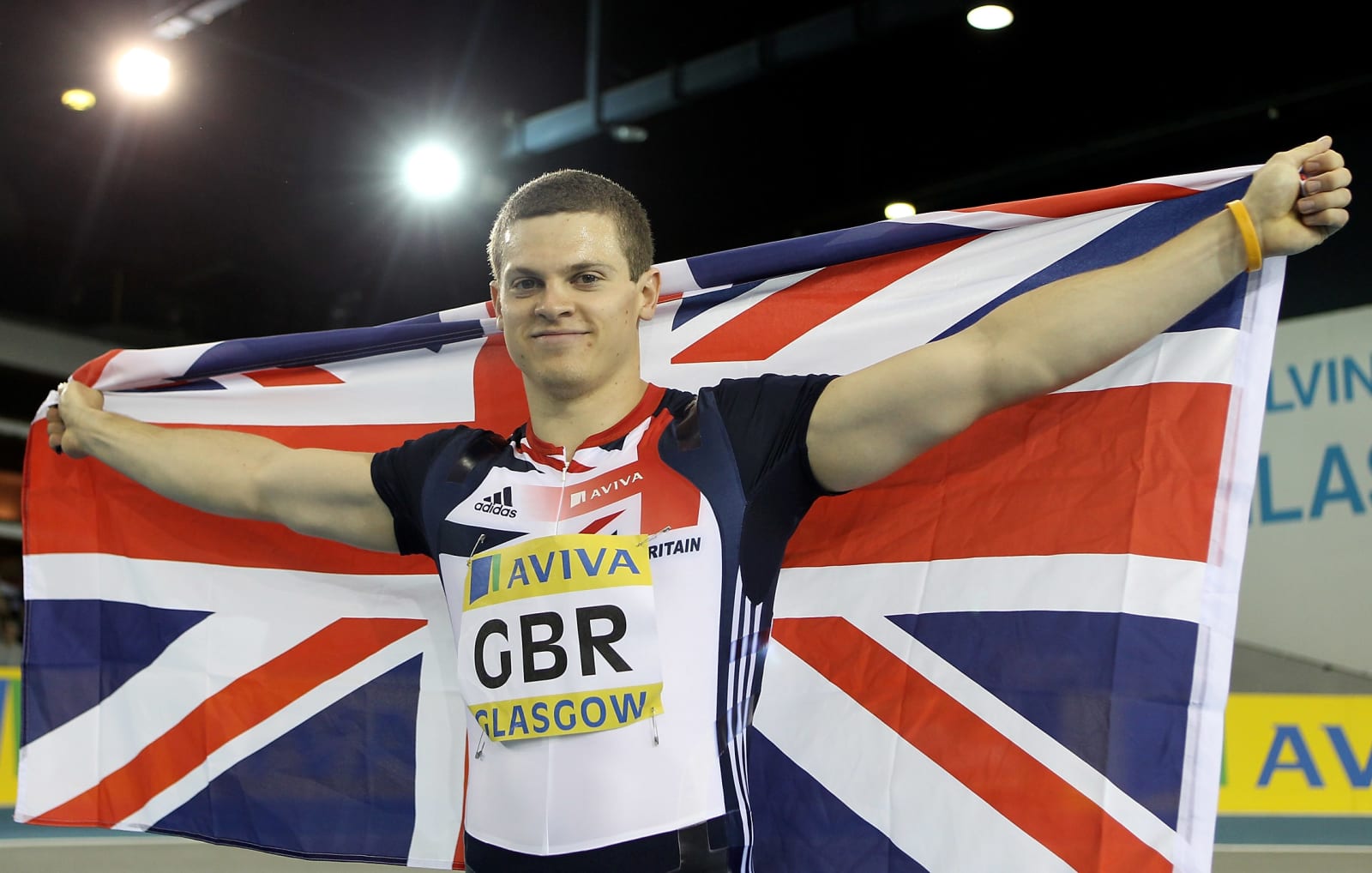 Few have heard of DNAFit, but it's entirely likely that it'll become well known in sporting circles in the near future. Lasarow is a "proud South African" who has been in talks with the government about teaming up with his country's Olympic athletes. "We've averaged seven medals at the last three games," he tells me, "and this is a real opportunity to increase the medal count." After all, in his mind, "the difference between getting the bronze medal and no medal at all is so minute" that squeezing an athlete's DNA for marginal gains is worth the effort.

As for me, I'm not expecting to win any medals anytime soon, but I am going to try and ditch my morning bacon for something involving kale. An effort which, believe you me, will be on par with winning gold at the Olympics.

Source: DNAFit
In this article: AviLasarow, CraigPickering, culture, DNA, DNAFit, GeneticTesting, medicine, science, Wellness
All products recommended by Engadget are selected by our editorial team, independent of our parent company. Some of our stories include affiliate links. If you buy something through one of these links, we may earn an affiliate commission.