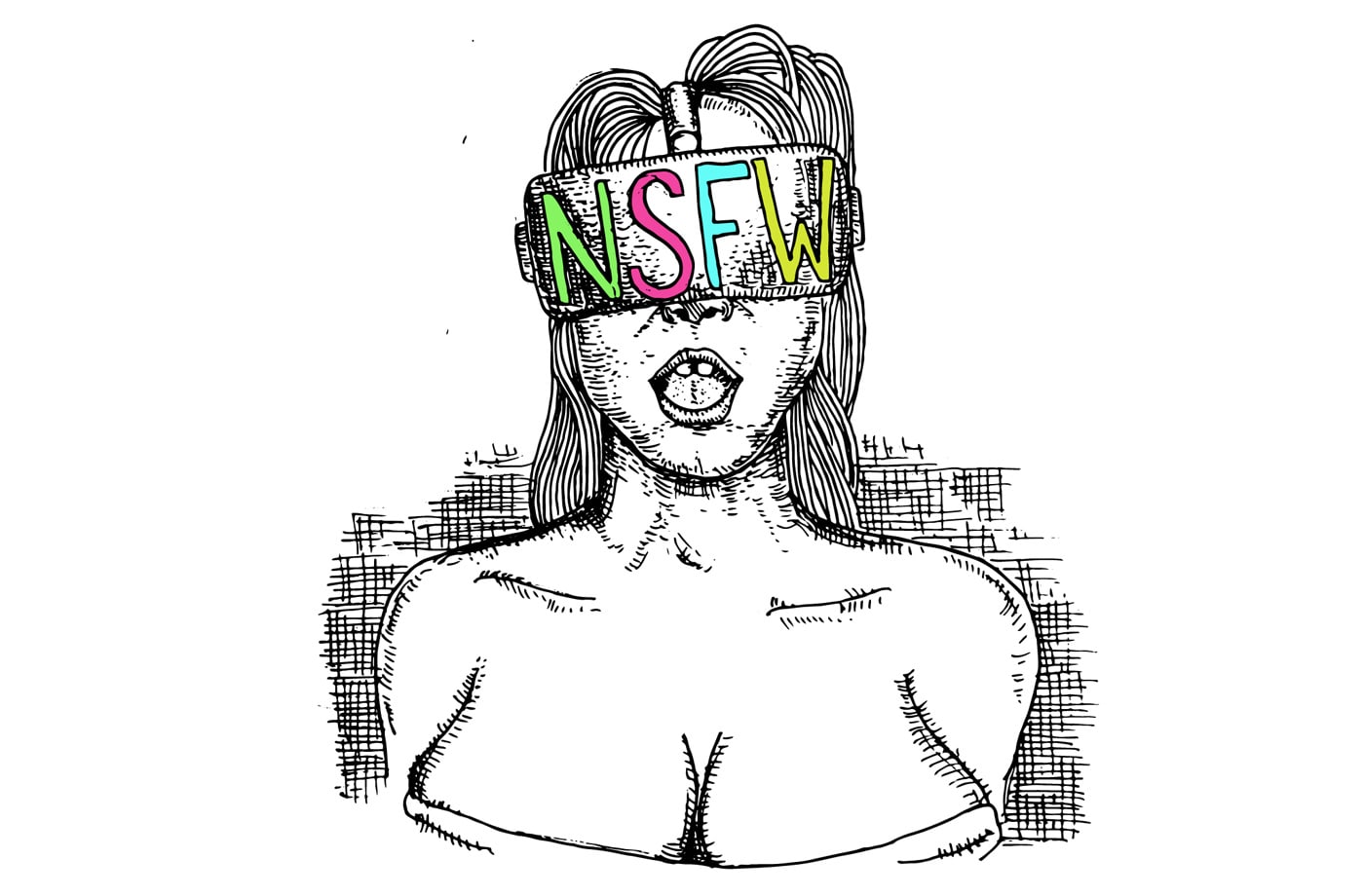 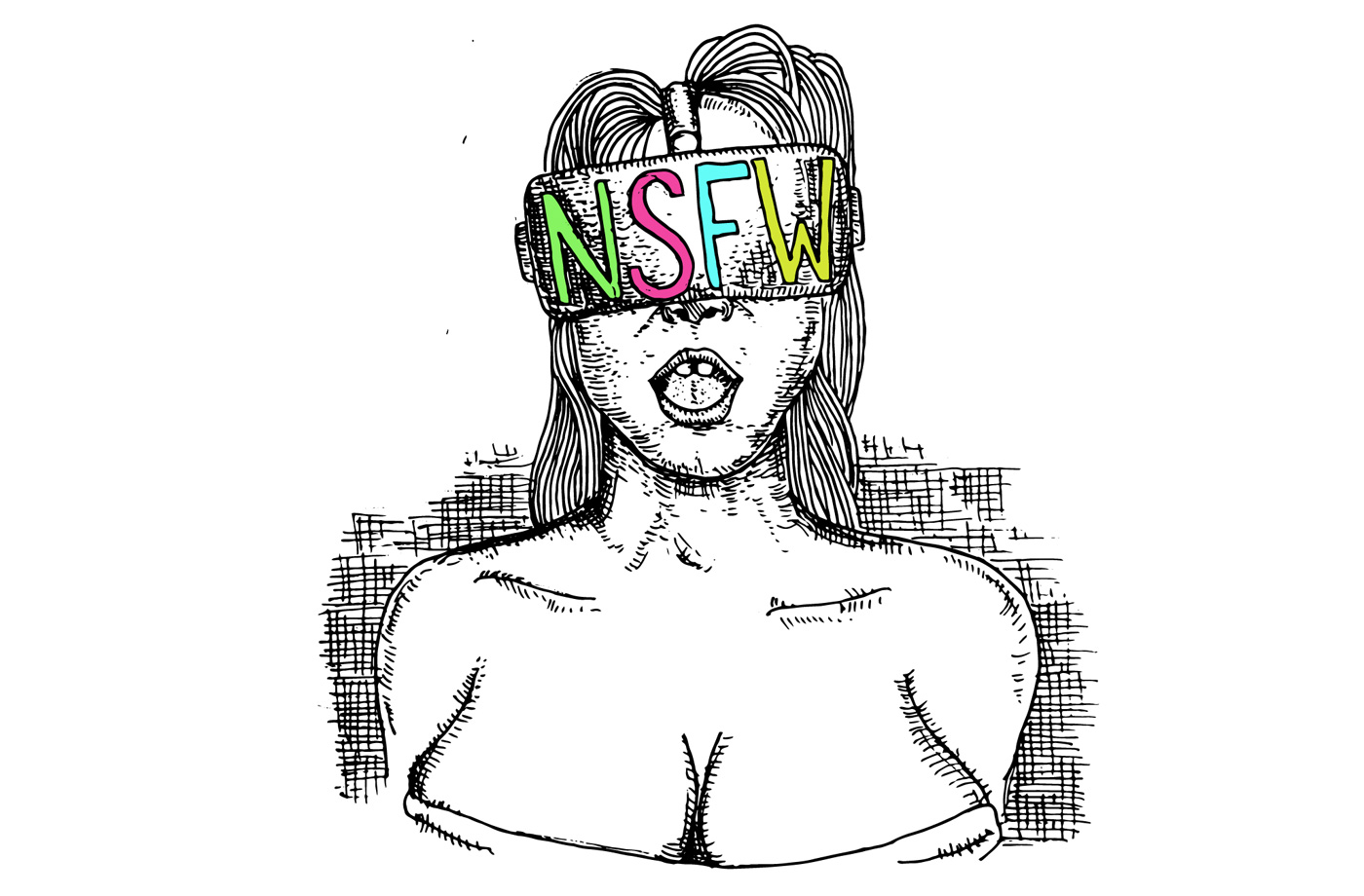 A woman with an enormous, warped vagina stands over you, attempting to situate a pair of naked coeds just so on an overstuffed sectional. Their faces distort and sporadically disappear as they pleasure each other and themselves. Their movements are sometimes smooth, sometimes staccato, like a couple of gyrating marionettes on Ecstasy. They moan with pleasure and talk dirty to no one in particular, but their mouths don't move. 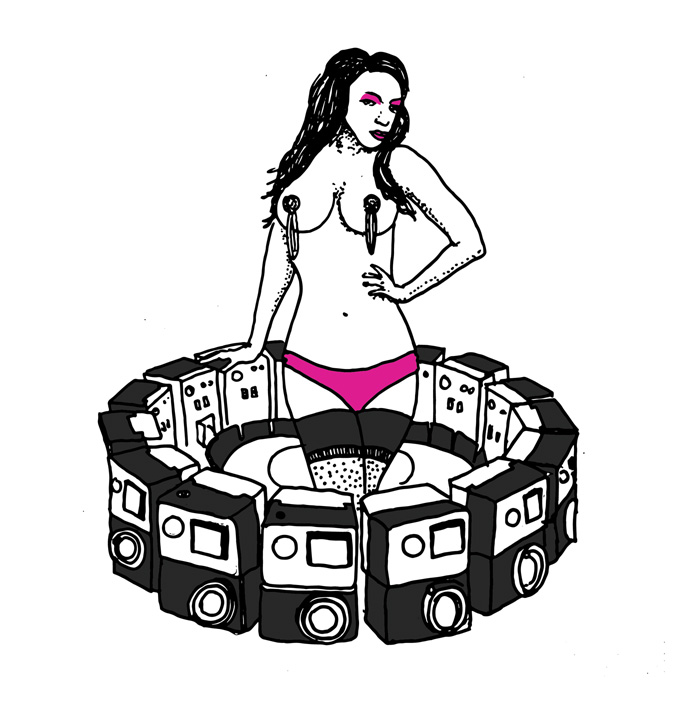 The room is largely empty save for one of those shitty IKEA floor lamps, a frat-house couch and a handful of empty exercise equipment. A woman stands behind you, hula-hooping in a dated leotard, like some voyeuristic bargain-basement Jane Fonda. A screen above the couch displays an error message and a chat room where men bark out explicit commands for the marionettes and their well-endowed puppet master.

This is not a nightmare. This is reality or, more accurately, a live 360-degree recording inside Camsoda's model house, an always-on content farm for live amateur sex. If you ask the company's president, Daron Lundeen, it's the future of adult entertainment. However, as we've learned from mainstream examples like the first live 360-degree performance from Dawn Richards and YouTube, the medium still has a long way to go.

Like YouTube, Camsoda is banking on the promise of 360-degree video, live streaming and, yes, virtual reality, to usher in a new era of user-generated content. Problem is, no one cares about 360-degree video. At least not yet.

Instead of some sexual fantasy land, I was transported back to the dingy college apartments of my youth.

Like so many first times, my first time watching a live cam show in VR was clumsy, overhyped and over before it started. The hourlong performance was scheduled for a Wednesday afternoon. Having checked the company's site for compatible devices, I was there, Samsung Gear VR in hand, ready to go. I'd been able to play the video on my desktop, but, due to Oculus' closed-garden approach to content and Camsoda's use of YouTube's open source 360-degree player, it would have taken me nearly the entire hour to get it up and running.

Two weeks and a handful of emails back and forth with the Camsoda crew later, I was ready for a second try. Instead of hacking my way into this immersive, interactive sex scene, I went the path of least resistance and grabbed a generic Google Cardboard from the office. This time, the setup was simple. I loaded the link on the site's VR page, pressed the Cardboard icon and slotted my phone into the headset. Just like that, I was there, dead center in the poorly furnished romper room I described earlier.

Instead of some sexual fantasy land, I was transported back to the dingy college apartments of my youth. Decor has never been porn's strong suit, but virtual reality can and should take us places we've never been before. I'd been in places like this, and I never want to go back. But who cares about paint swatches and track lighting when you have a room full of hot, naked women, ready to do anything you say, right?

Unfortunately, it's not that simple. Yes, Camsoda brought together some of its best performers for the shoot. They even seemed to keep a handful of onlookers engaged for a majority of the performance. But when it comes to 360-degree live video, success is measured in more than a few good nuts.

The show was plagued by slow connections, poorly synced audio and pixelated private parts. The models spent an excessive amount of time trying to figure out where the camera was and how to play to it once they found it. In a previously recorded video, I even saw a large, male crew member step on set to adjust a piece of equipment. Talk about breaking the fourth wall.

In a perfect world, users would not only be able to see what their favorite performers are doing in real-time, but to feel it too.

Live 360-degree video requires a fair amount of bandwidth and battery power on the part of the viewer. If you're watching in VR, it also requires specialized hardware and a heavy dose of patience. And what of the live cam show's killer feature? With a VR headset strapped to your face, how does one ask a performer to finger her co-star, pucker her butthole or reach for the rubber fist? Even for the most adept touch-typist, single-handed key pecking is a time-consuming undertaking.

I won't fault Camsoda or its handful of competitors for trying. Porn's ability to shape new technology has become legend and created a new class of technologically minded entrepreneurs. Add to that an immersive new medium that promises to put the viewer right where the action is, and you seemingly have the recipe for the next big thing in adult entertainment.

When the tech and consumer interest finally catch up, early adopters like Camsoda will be there, ready to cash in, and I have no doubt that they will. The trouble is, we're still a long way from figuring out how to use these amazing new tools, and the sight of one giant warped vagina combined with the squeals of two faceless banshees aren't exactly the stuff wet dreams are made of.

Late last week, Camsoda announced a partnership with Kiiroo, the teledildonics platform that gave me the power to fuck myself. In a perfect world, users would not only be able to see what their favorite performers are doing in real-time, but to feel it too. VR, teledildonics and live 360-degree streaming all present amazing ways of thinking about and having sex, but putting them all together before anyone one of them is ready for prime time is just one big technological boner-killer.

If you can figure out how to hold a Google Cardboard in place, type commands to your dream girl and pleasure yourself with an internet-connected stroke sleeve all at the same time, I've got about 500 Camsoda tokens with your name written all over them.