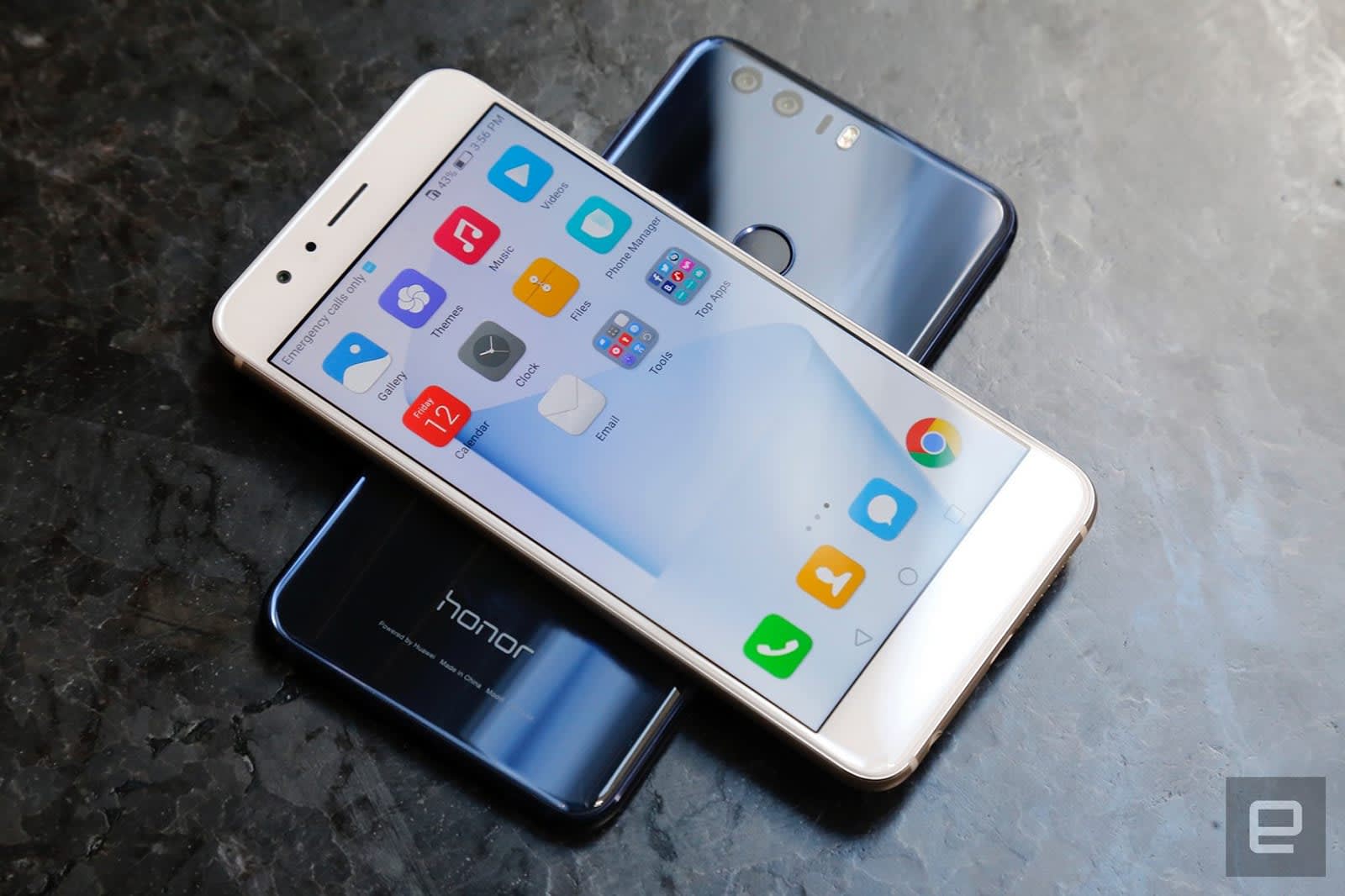 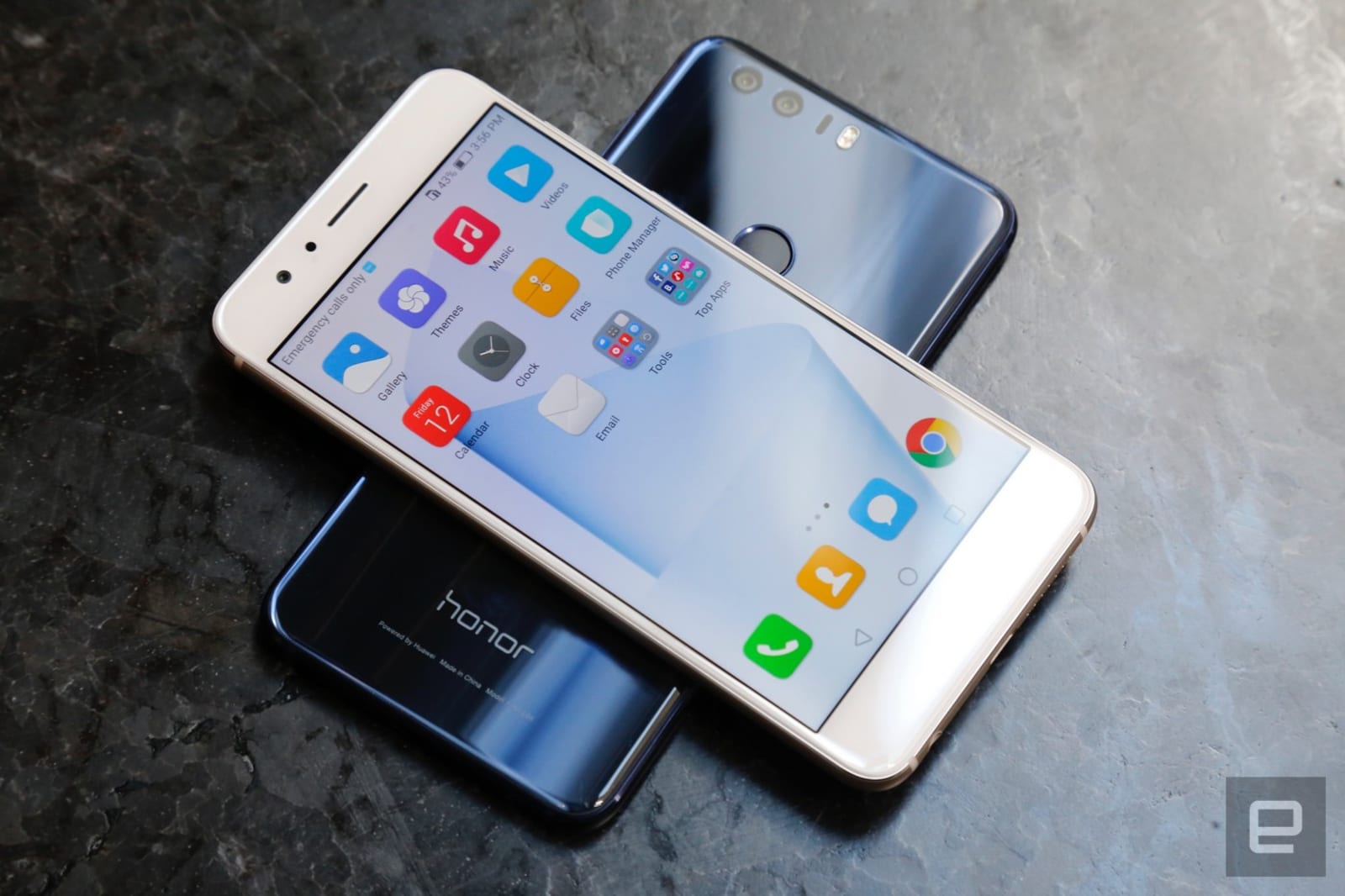 It's not even been a year since Huawei brought its affordable Honor line to the US, and the company is already releasing a follow-up. The Honor 8 is a smartphone designed with millennials in mind, and will be available for pre-order on August 17th via the Honor website, Best Buy, Amazon and a bunch of other e-tailers for $400. I had a chance to check out the Honor 8 ahead of its US release and was impressed by its dual-sensor camera and eye-catching design. At that price, however, the Honor 8 faces some stiff competition. The Honor 8 was made with what Huawei calls "multilayer optical filming" that helps it catch and reflect light in a subtle way. Although it looks a lot like the Galaxy S6, the 8 is quite pretty in its own right. When I tilted the phone from side to side, I could see vertical lines appear and fade. In addition to the slightly curved 2.5D glass all over, the handset's bezel is also made of aircraft-grade aluminum. 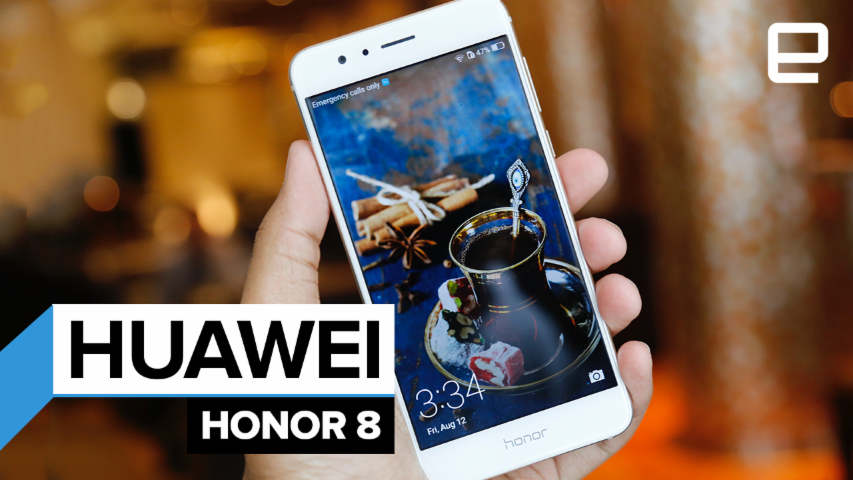 Huawei also offers a special warranty for the Honor 8 on top of its standard 12-month option that fixes damage to the handset's glass covering for the first three months after purchase.

Thanks to the attention to materials, the Honor 8 feels sturdy, but ZTE's $400 Axon 7 has a more solid build. I also appreciate that Huawei kept the rear cameras under the glass instead of having them jut out like the cameras on other phones, such as the iPhone 6s, Galaxy S7 and Nexus 5x.

Speaking of the rear camera, Huawei outfitted the Honor 8 with a 12-megapixel dual-sensor setup. An RGB sensor captures color data, while the monochrome lens records details. This combination is similar to that in Huawei's more premium P9 flagship, which was co-engineered by popular camera maker Leica. The images I snapped with our preview Honor 8 indeed looked clear and bright, with accurate colors, and selfies taken with the 8-megapixel front camera were similarly vibrant. The camera app offers a bunch of cool modes, such as a so-called Wide Aperture setting that lets you adjust the focal point and amount of depth of field (blurred background) after you shoot a photo. Huawei also made it easier to quickly snap pictures by building in some shortcuts. You can trigger the shutter by laying your finger on the fingerprint sensor below the rear camera or by saying "cheese." When the phone is asleep, you can launch the camera (and immediately take a picture) by double- or triple-pressing the volume down button, depending on how you set it up.

None of those features are new for Huawei's phones, though. Like the P9, the Honor 8 comes with the company's EMUI 4.0 software overlaid on Android 6.0 Marshmallow. This brings nifty features such as the ability to assign custom tasks to individual fingers laid on the sensor, as well as using your knuckle to outline a specific area of the screen to capture it.

The similarities to the P9 don't end there. The Honor 8 also has a 5.2-inch, 1080p display, a USB Type-C charging port and a 3,000mAh battery that supports fast charging. Huawei says the phone will go from 0 to 50 percent after 30 minutes of being plugged in.

While both phones use the company's own octa-core Kirin chips, the P9 has the faster Kirin 955, as opposed to the Honor 8's Kirin 950. Huawei said the Kirin 950 is equivalent to Qualcomm's Snapdragon 820, which powers most of this year's flagships, but we'll have to put the Honor to the test to see how it holds up. 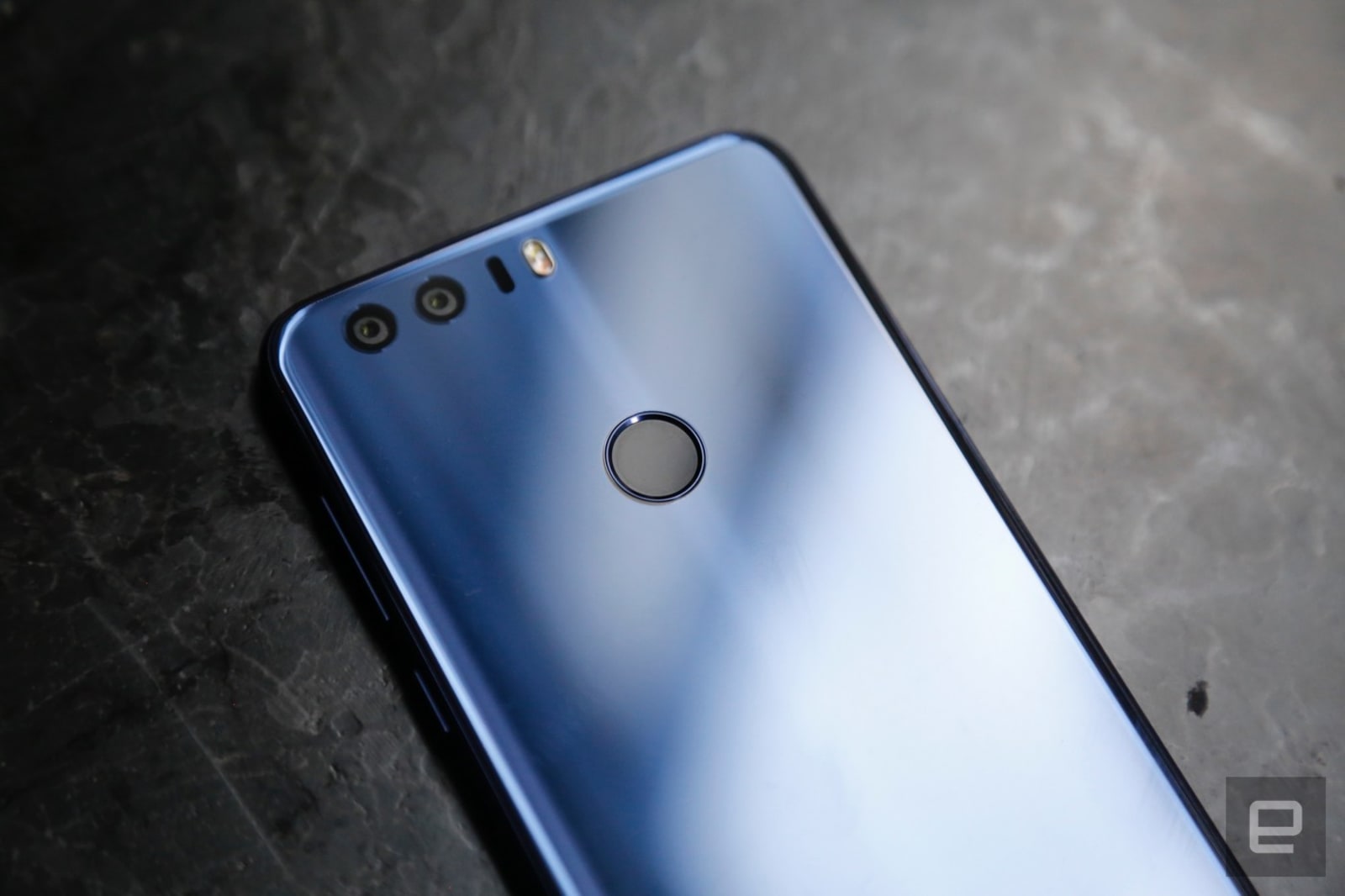 The Honor 8 comes in black, white and blue, the latter being my personal favorite. It's so popular, in fact, that folks in China are snapping up that version (which retails at about US$360 there) and reselling it for about US$500, according to Honor president George Zhao.

Too bad the Honor 8 doesn't cost the same in the US as it does in China. Other midrange phones on the market, such as the OnePlus 3, the ZTE Axon 7 and the Alcatel Idol 4S cost the same and the latter even comes with its own VR headset in the box. But so far the Honor 8 appears to have a pretty decent camera, and if it does offer performance that parallels its rivals, it could be a worthy adversary. Stay tuned to see how well it stacks up against its competitors.

In this article: gadgetry, gadgets, gear, honor8, huawei, HuaweiHonor, mobile, smartphone
All products recommended by Engadget are selected by our editorial team, independent of our parent company. Some of our stories include affiliate links. If you buy something through one of these links, we may earn an affiliate commission.