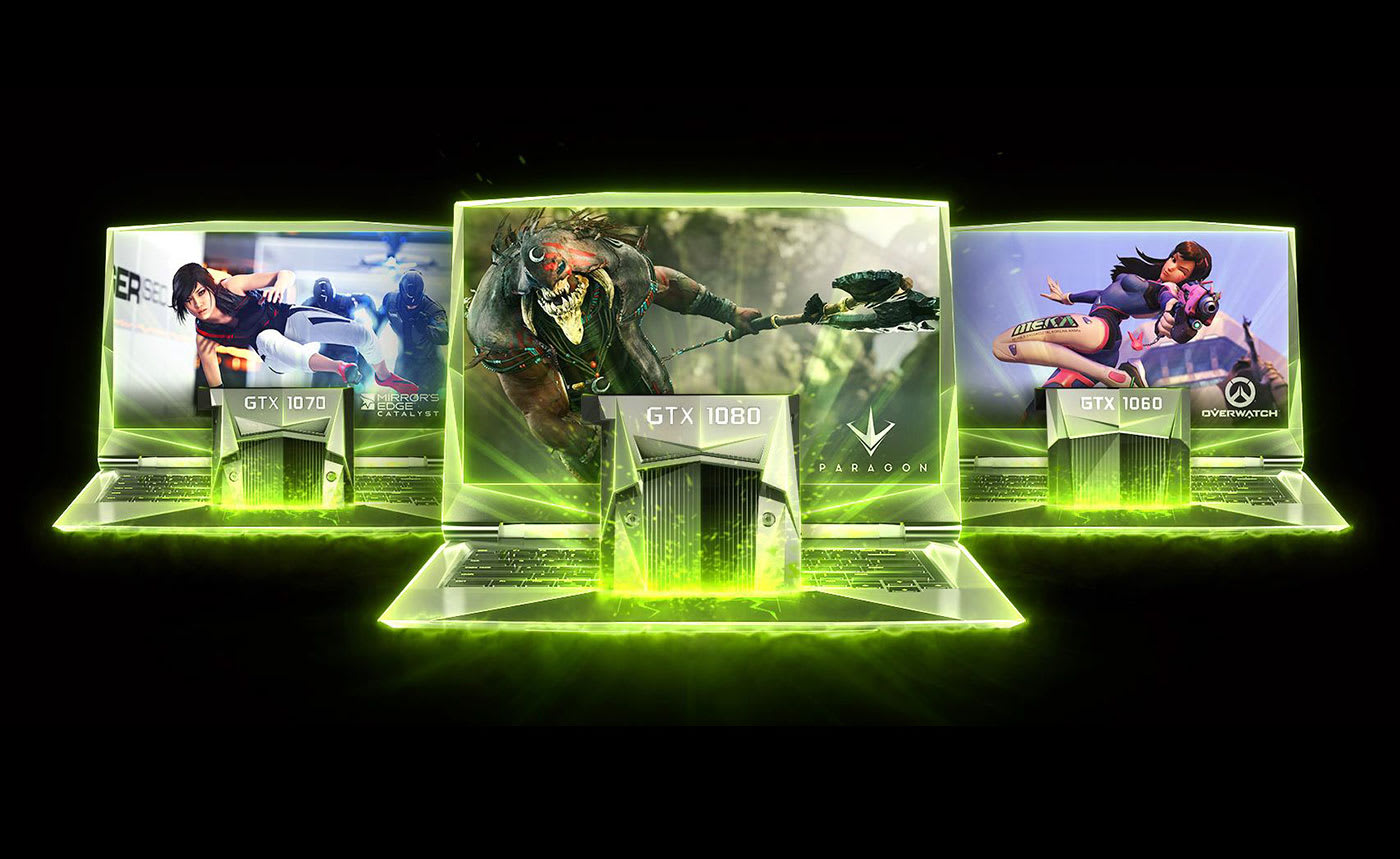 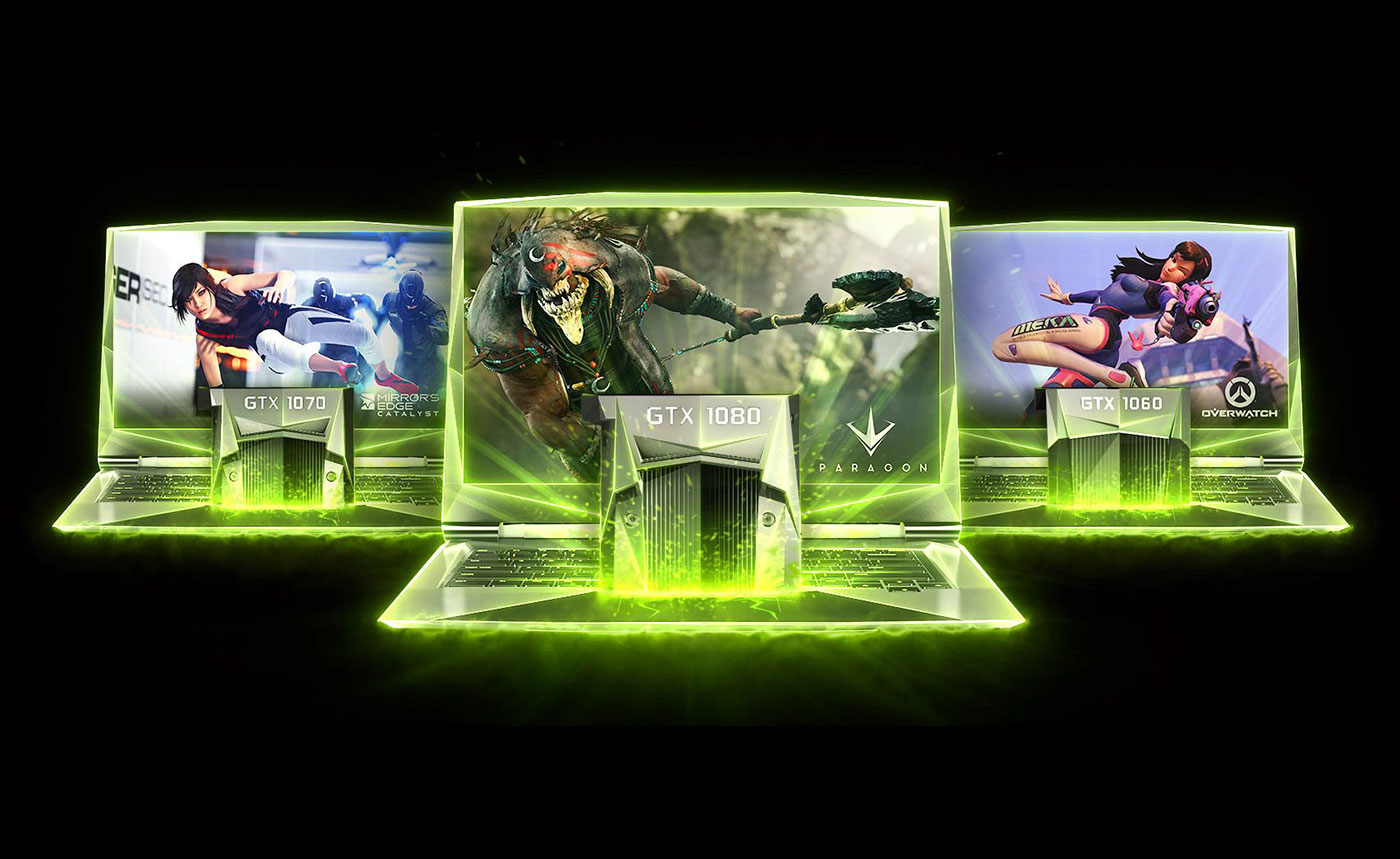 With the GeForce GTX 1080, NVIDIA pushed the boundaries of what a $600 graphics card can do. That flagship card was joined by the GTX 1070 and GTX 1060, two lower-power cards based on the same 16nm Pascal architecture at a much more affordable price. Now, it's bringing mobile versions of those cards that match their desktop counterparts in almost every area -- including being VR ready.

That's not hyperbole. The top-of-the-line laptop 1080 has 2,560 CUDA cores and 8GB of 10Gbps GDDR5x memory. The desktop chip has the same. The only difference is clock speed: it's set at 1,556MHz, while the desktop version is 1,607MHz. The two do share the same boost clock (1,733MHz) though, and both have access to all the new technology introduced for the Pascal architecture. That means simultaneous multi-projection, VRWorks, Ansel and the rest.

4K gaming, too, is more than possible. At 4K with "high" settings the same setup can push 89FPS on Overwatch, 70FPS with Doom, and 62FPS with Metro Last Light (according to NVIDIA). Only Mirror's Edge Catalyst and Rise of the Tomb Raider fall short of 60FPS, both clocking in at a very playable 52FPS. At the chip's UK unveil, NVIDIA showed the new Gears of War playing in 4K in real-time, and there were absolutely no visible frame drops. With figures like that, it goes without saying that VR will be no problem for the 1080. The desktop GTX 980 is the benchmark for both the HTC Vive and Oculus Rift, and the 1080 blows it away. If you're looking for more performance, the 1080 supports overclocking of course -- NVIDIA suggests as high as 300MHz -- and you can expect laptops sporting two in an SLI configuration soon.

The major drawback for the 1080 is power. We don't know its exact TDP yet, but given the near-identical desktop version runs at 180W, you'd imagine it's got to be at least 150W. NVIDIA has tech that counters that heavy power load when you're not plugged in, of course. Chief among these is BatteryBoost, which allows you to set a framerate (i.e. 30FPS), and downclocks the GPU appropriately to save power -- if your card is capable of pushing 147FPS plugged in, that's going to be a fair amount of power saved. Whatever the battery savings possible, though, it won't change the fact that the 1080M is only going to slide into big laptops.

That's fine for those already used to carrying around behemoths on the go, but plenty of gamers prefer something more portable. Enter the 1070. NVIDIA says this chip will fit into any chassis that currently handles the 980M, which covers a lot of laptops.

Rounding off the lineup is the 1060, the mobile version of NVIDIA's $249 "budget" VR-ready card. It's something of the exception to the rule here. Yes, it offers 1,280 CUDA cores and 6GB 8Gbps GDDR5 memory, which is equal to the desktop 1060. But at the lower end of the range the fact that they're clocked lower (1,404MHz vs. 1,506MHz) hurts performance quite a bit more. In side-by-side comparisons, NVIDIA's benchmarks suggest you'll get within ten percent or so of the desktop card. That's not to say that the 1060 is a slouch. For traditional gaming, you're not going to hit 60FPS at 1080P in every game without thinking about settings, but if you can play it on a desktop GTX 980, it's probably a safe bet that the 1060 can handle it. That's insanely impressive when you consider that the 1060 will fit into the same chassis as the 970M -- think "ultra portable" gaming laptops.

In reality, the 10-percent gap between the 1060 and the 1060M probably makes it slightly slower than the GTX 980, but the difference is almost negligible. I wasn't able to push the 1060M too hard on the "VR ready" promise -- you can read about the demo and why the 1060M matters in a separate article -- but the demo I had was solid. And really, being able to plug an Oculus into something as slim as a Razer Blade was unthinkable a few months ago, so it's probably best not to complain.

Acer, Alienware, Asus, Clevo, EVGA, HP, Gigabyte, Lenovo, MSI, Origin, Razer, Sager and XMG are just some of the OEMs signed up to make laptops with the new Pascal chips. Many will announce updated and all-new models today, while some might hold off a while. But expect lots of super-powerful, VR-ready gaming laptops very soon.

In this article: 1000mseries, 1060m, 1070m, 1080m, acer, asus, gadgetry, gadgets, gaming, gear, geforce, hp, lenovo, nvidia, pascal
All products recommended by Engadget are selected by our editorial team, independent of our parent company. Some of our stories include affiliate links. If you buy something through one of these links, we may earn an affiliate commission.