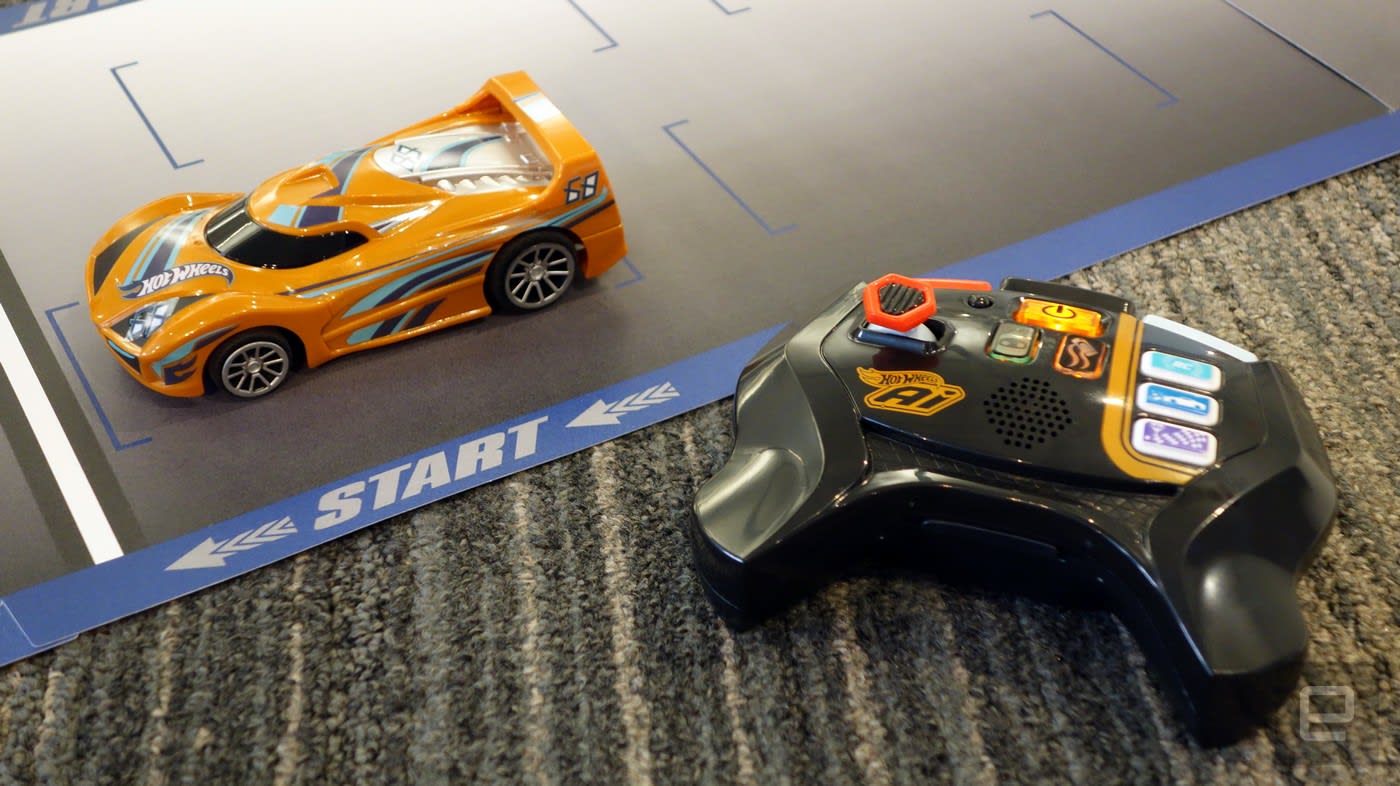 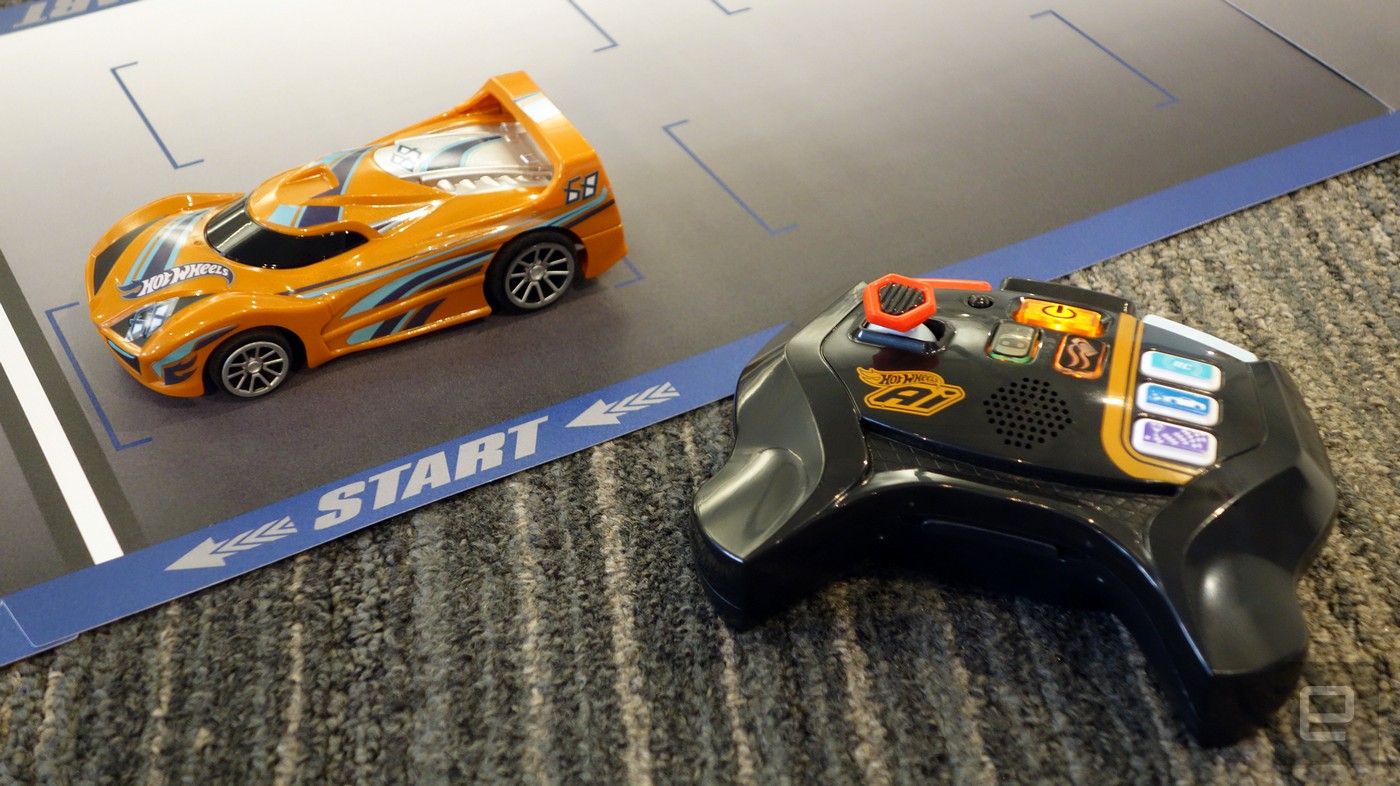 Model cars and track racing are the bread and butter of Hot Wheels, but they might look a little long in the tooth compared with flashy console games like Gran Turismo and Need for Speed. With the new Hot Wheels AI set, toy autos get a bit of a boost -- not just in speed, but in intelligence. Now you can race against a computer in the real world, right there on your living room rug. Each Hot Wheels AI set comes with two cars, 20 pieces of track and two controllers. The 1/32 scale models look like normal toy cars, with snazzy shells not based on any existing real world vehicle -- the blue design is called "Fast Fish" and the orange one is "Spin King." Flip them over and underneath you'll find two infrared sensors similar to the ones on a Roomba. They allow the computer inside to "read" the gradient pattern on the vinyl track so it knows exactly where the car is and can adjust the steering to stay on course even in the middle of a heated race.

The track pieces can be arranged in more than 40 layouts, allowing you to add turns and straightaways to your heart's content. That's not the only thing about Hot Wheels AI that can be customized -- the shells can be swapped out for new designs, and the wheel rims are interchangeable as well (gold-plated and spinning options not yet available). 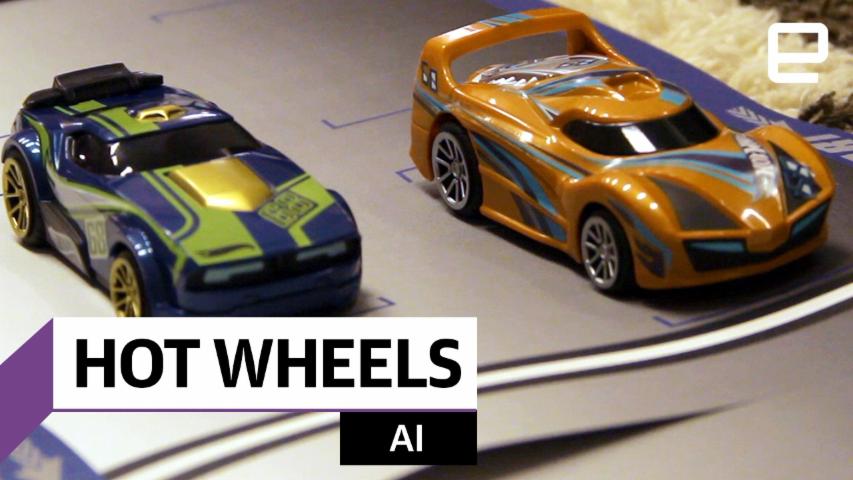 Once you've got everything to your liking, it's time to race. There's no app or anything like that -- Hot Wheels AI comes with special controllers that connect at 2.4GHz to each car. They have a very video game flair to them: The shape resembles an Xbox gamepad, and the controls include a directional joystick on the left with two shoulder buttons up top. But that's where the similarities end. The triggers on the back are designed more like those you'd find on a slot car control, and the front has an array of colorful buttons for choosing game modes.

There's an auto-drive mode, where the cars zip around the track on their own. But let's face it: You want to be the one doing the driving. There's a free-play mode that puts you in full control and lets you take it anywhere, including off-track. On the track, you might want to try the practice mode. That's just a basic run that lets you try for your fastest time while you get used to the controls. Once you're done practicing, though, it's time to race against another player or an AI in championship mode. That lets you set up a race with a certain number of laps, like 10. The computer will then track the relative position of the cars, with the controller speakers announcing the standings on each lap and eventually calling a winner. 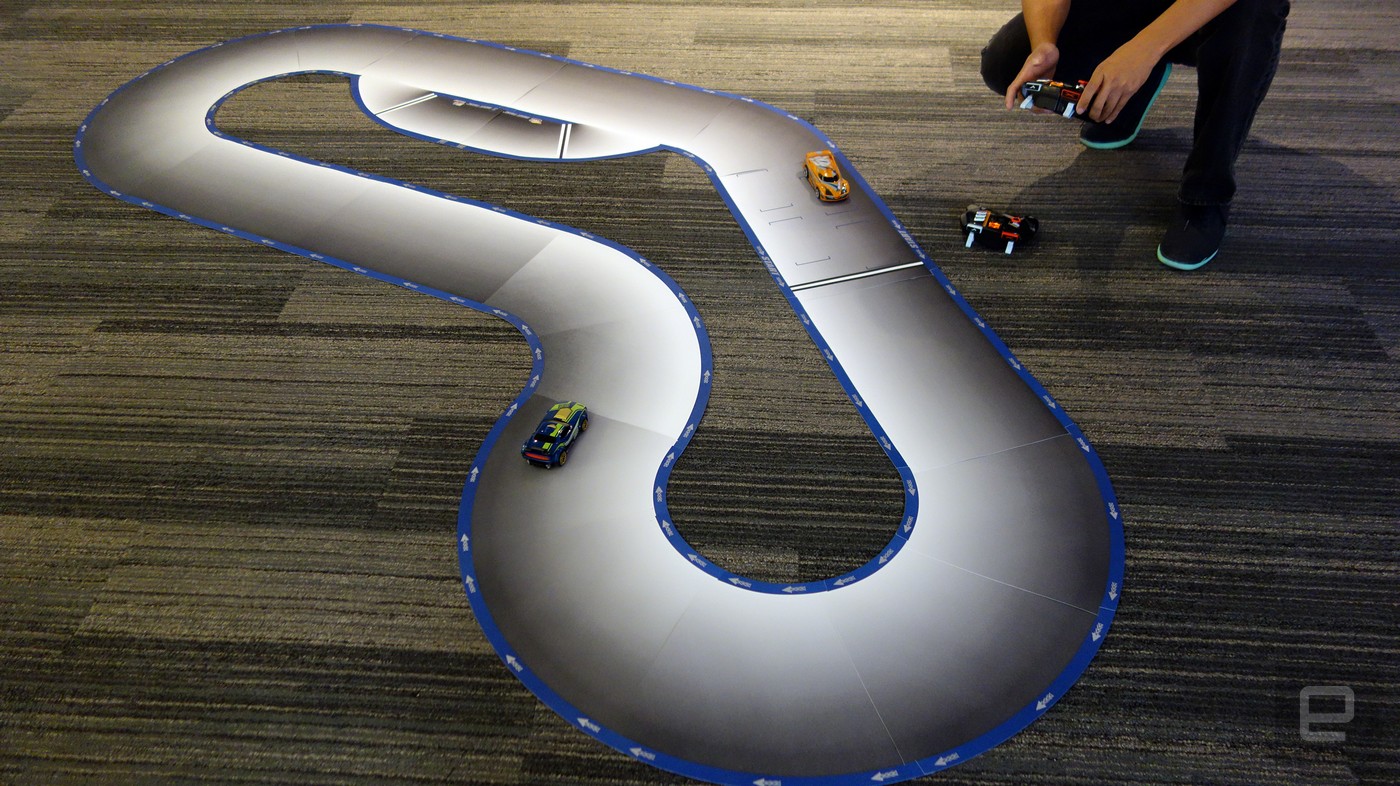 Both the practice and championship settings allow you to select from three skill levels: beginner, advanced and expert. The first difference is how much assistance you get from the computer -- beginners just need to hit the gas, and the system will do the work of keeping your car on the road. Expert puts you almost in full control of acceleration and steering. The other big difference in skill level is how fast you're able to go. Beginner putts along at a steady but unexciting pace, while expert takes advantage of the cars' ability to travel up to 5.6 mph, the scaled-down equivalent of 180 mph.

Besides the controller, another distinctly video-game twist to Hot Wheels AI is the ability to deploy hazards against your opponent during a championship race. These road mishaps are activated with the touch of a button, but there's no actual oil stick that appears on the track -- the affected car will skid or stall out on its own, with the speaker on the controller announcing the cause of the problem. It's a lot like Mario Kart -- in fact, the hazards can only affect the lead vehicle, so it's exactly like the cursed blue shell. (Oh, how I hate you, blue shell.) 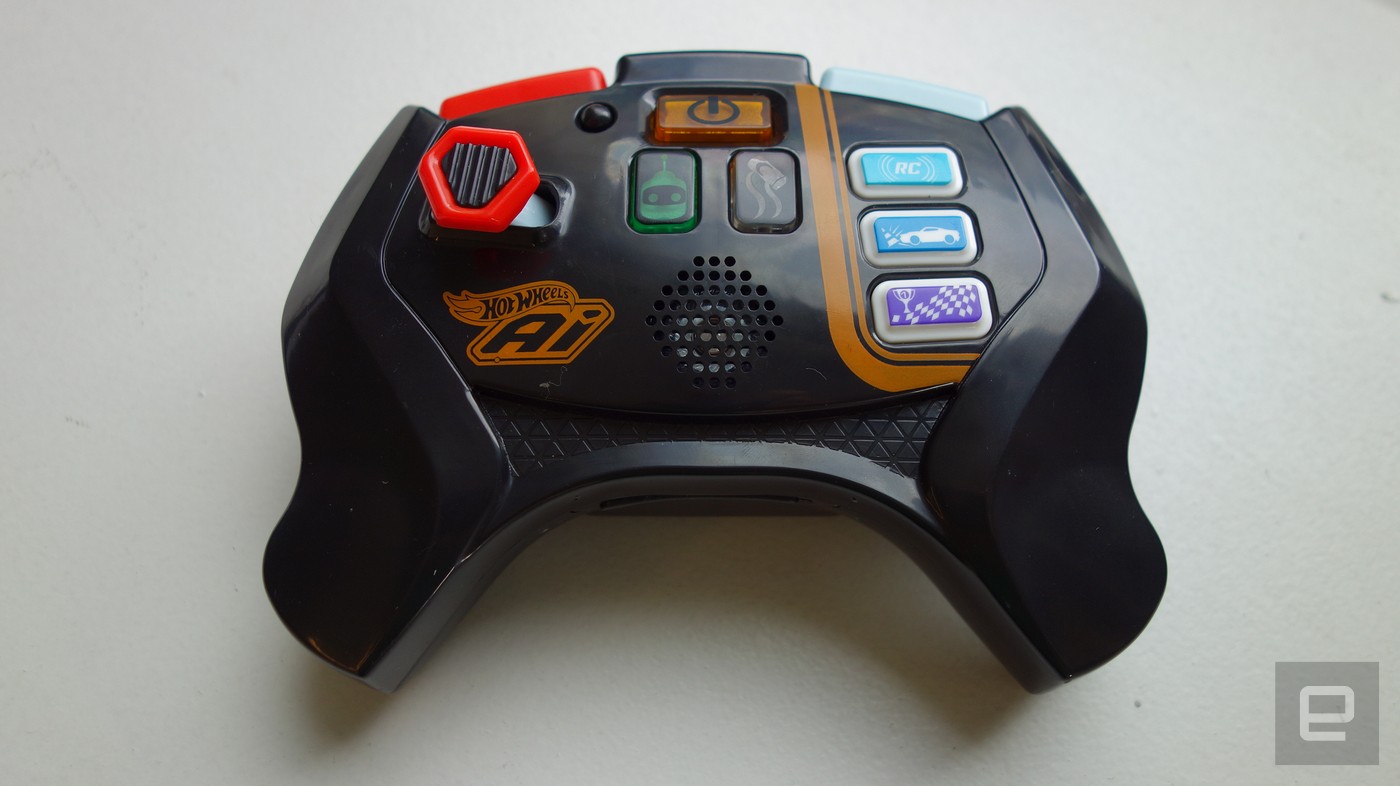 The number of sabotages you have is limited by the difficulty level: beginners get nothing, advanced racers get two and experts have four in their arsenal. They can be reloaded by driving into the "pit area" of the track. It's an optional bend you can add to the side of the track for "repairs," but the AI won't guide you there automatically -- you have to switch to the RC-assist function and manually drive your vehicle in. It's not easy, so you're definitely earning that refill.

I'm infamously bad at games like Mario Kart (just ask my co-workers), but I still found beginner difficulty to be a little too constraining. I do think it's great for younger kids still trying to figure out the basics. Advanced mode was a little more my speed -- you get enough guidance to keep you on the track, but it's still possible to maneuver around a bit and it's not annoyingly slow. I still ran off the track a few times, especially after being rammed by my human opponents. The AI is a fair enough driver, and a good way to learn the ropes. But for a real challenge you're going to want to play this with a friend or a competitive family member. 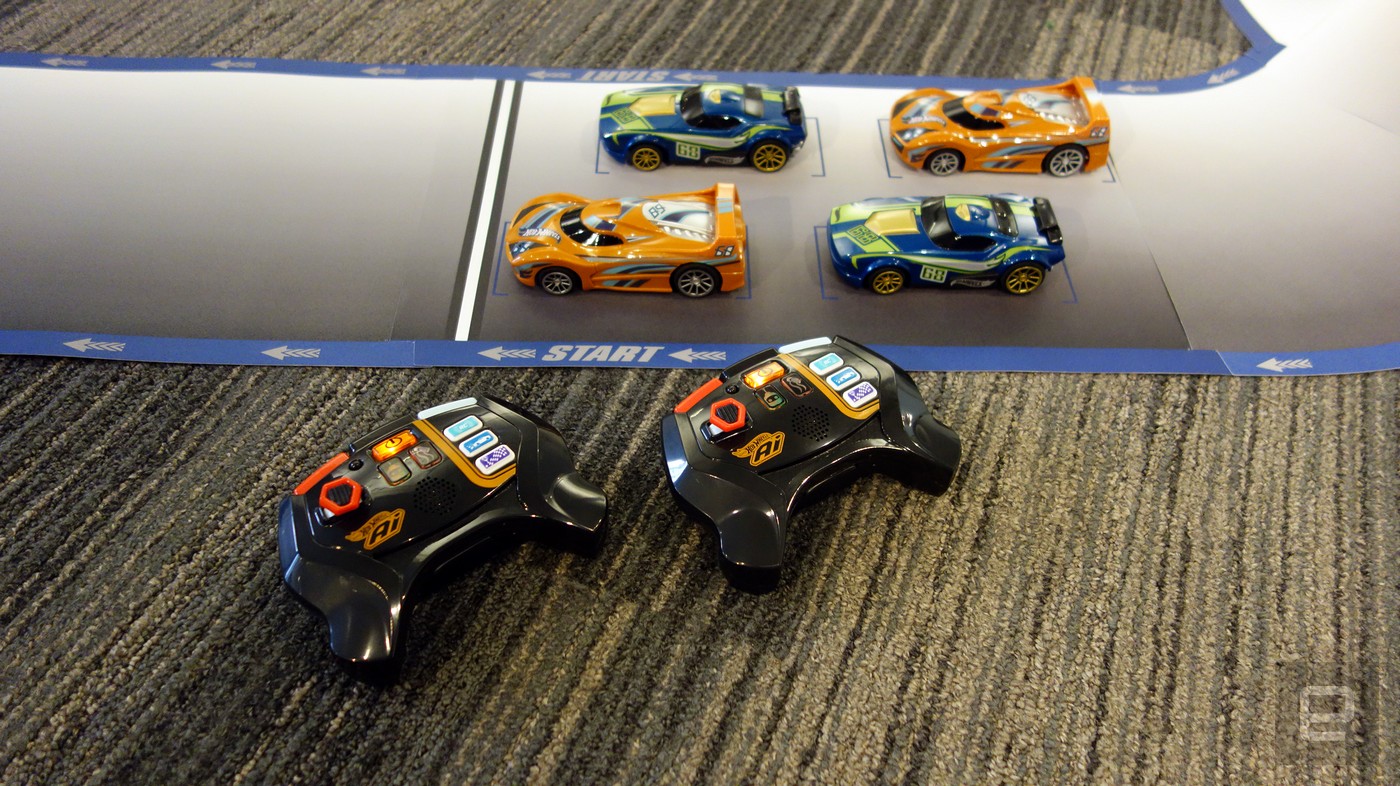 In fact, the varying difficulty modes make it great for groups of kids. If you have younger siblings, then you know the pain of being told to "go easy" or even let them win. With Hot Wheels AI, an older child can choose the advanced or expert setting and drive to her full potential, while the littler one can still feel like she's participating without getting frustrated by her lack of skill. She might eventually notice her car isn't fast enough, but hopefully by that point (and age) she'll have improved enough that it's time to graduate to another skill level.

Hot Wheels AI might be aimed at ages "8+," but it really does reach across age groups. The controllers can be handed off to younger kids, or older adults with fond memories of slot cars and plastic tracks. It's the same classic combination of speed and style that Hot Wheels is known for -- but now it's got some brains on the inside. The basic set goes on sale this October for a sweet $100.

In this article: gadgetry, gadgets, gaming, gear, hands-on, HotWheels, MarioKart, Mattel, racing, RC, RF, robots, slotcars, toys, video
All products recommended by Engadget are selected by our editorial team, independent of our parent company. Some of our stories include affiliate links. If you buy something through one of these links, we may earn an affiliate commission.