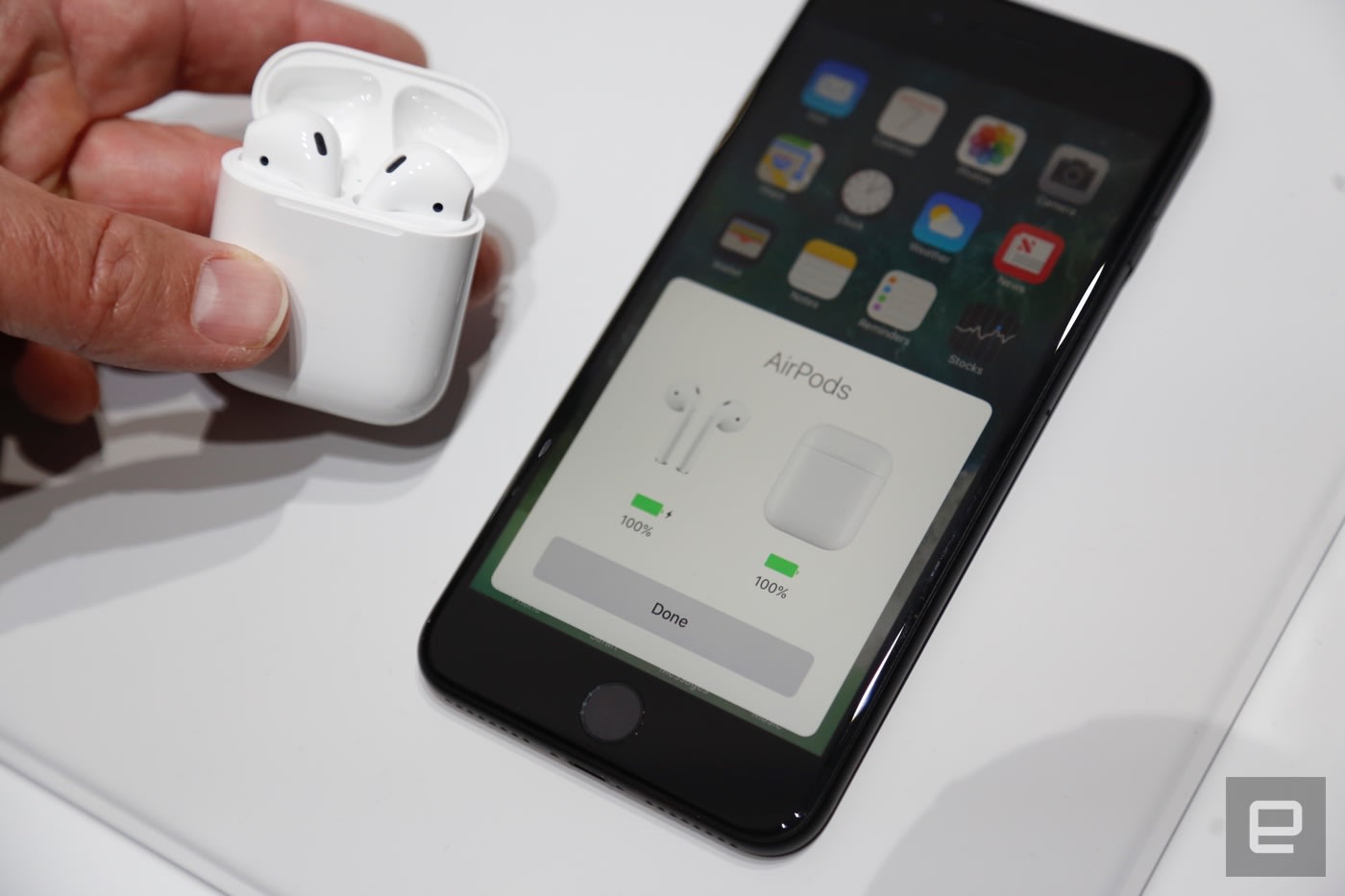 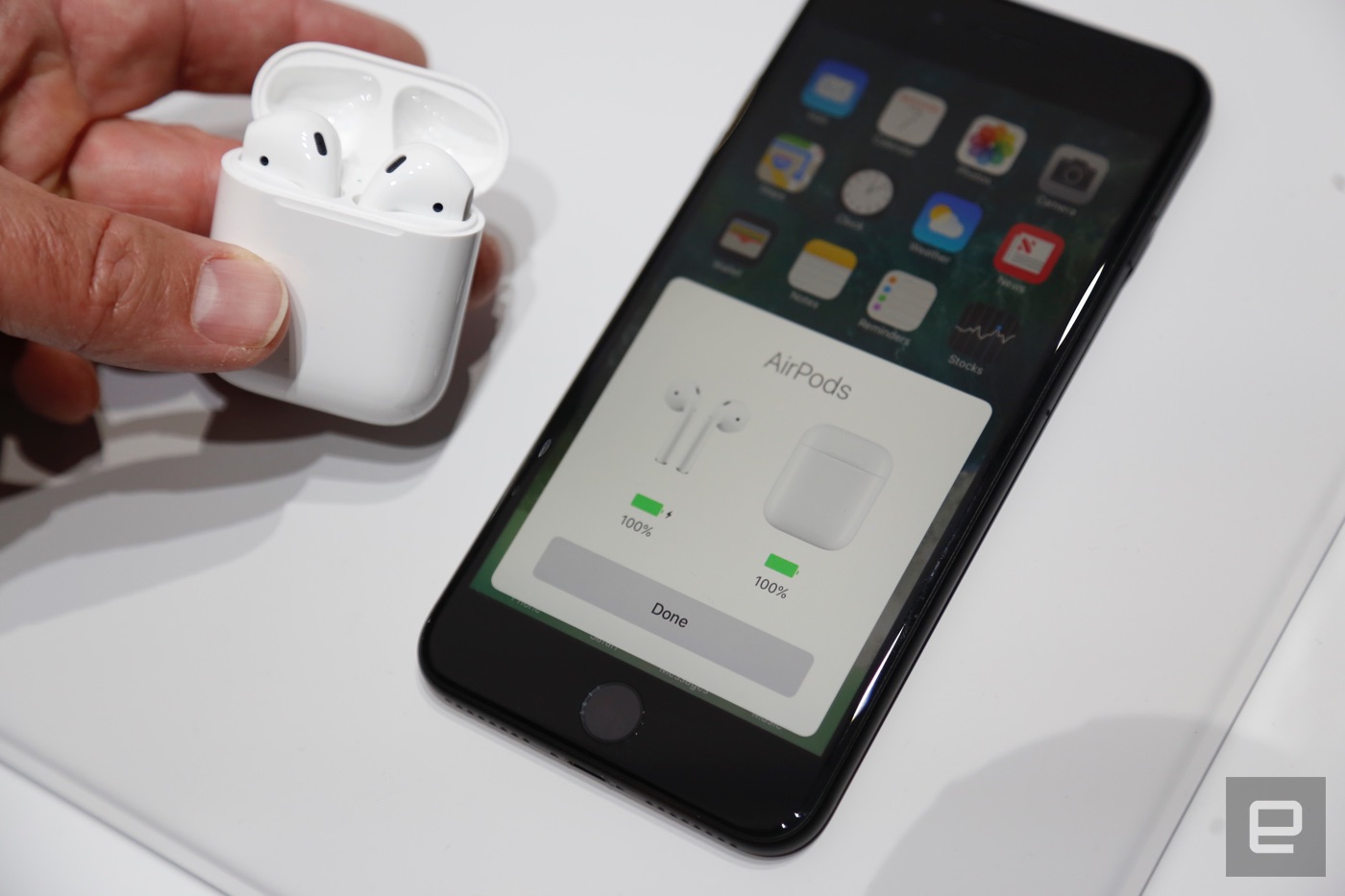 Apple's embracing this whole "no headphone jack" thing in a big way, and there's no better indicator than the company's new $159 AirPods. They're not quite ready for public consumption -- the launch is scheduled for next month -- but Apple had plenty of pairs to play with here at its iPhone launch event in San Francisco. As far as first impressions go, the AirPods certainly seem neat enough. Still, do they have the chops to become a must-have for iPhone owners? I really, really doubt it.

First, a caveat: Apple's press room is still pretty insane, and the din of journalists is truly horrifying. As such, it was hard to tell exactly how nice they did (or didn't) sound. That said, what I did hear wasn't very far from the quality I always got out of Apple's normal, wired earbuds -- that is, pretty good but nothing to write home about. A Justin Timberlake track that an Apple spokesperson fired up felt a little too airy for my liking, and while we've all got different tastes, I was hoping for more out of a pair of pricey earbuds. Hopefully it was just the wrong music in the wrong place, and the AirPods are actually capable of more.

What you're really paying for are the smarts inside the AirPods. Pairing them with an iPhone 7 was as simple as putting them next to each other and waiting for the setup panel to appear on the phone's screen. (This is apparently how Apple Watch pairing will soon work, too). After that, you can double-tap on the buds to start chatting with Siri -- all the usual commands work -- and pulling one of them out of your ear stops the music completely. There are also some neat noise-reduction tricks here for when you're taking calls using the built-in microphone, but I didn't get a chance to ring up my friends and properly try it out. More important, Apple says these things will last up to five hours on a single charge, a claim we have no way of verifying right now. For those of you keeping track, though, Samsung claims its similar Gear IconX earbuds last for only three hours on a single go-around. Then again, the IconX also double as actual workout buddies, an avenue Apple didn't try to pursue even though the Watch Series 2 and iOS 10 emphasize user health pretty heavily.

At the very least, their familiar design ensures you know what you're getting into. If Apple's EarPods never really fit snugly in your ears, well, you'd probably do well to stay away. I've personally never had a problem with their fit, so the AirPods nestled nicely into my ears and stayed there even as I wagged my head around like a huge dork. 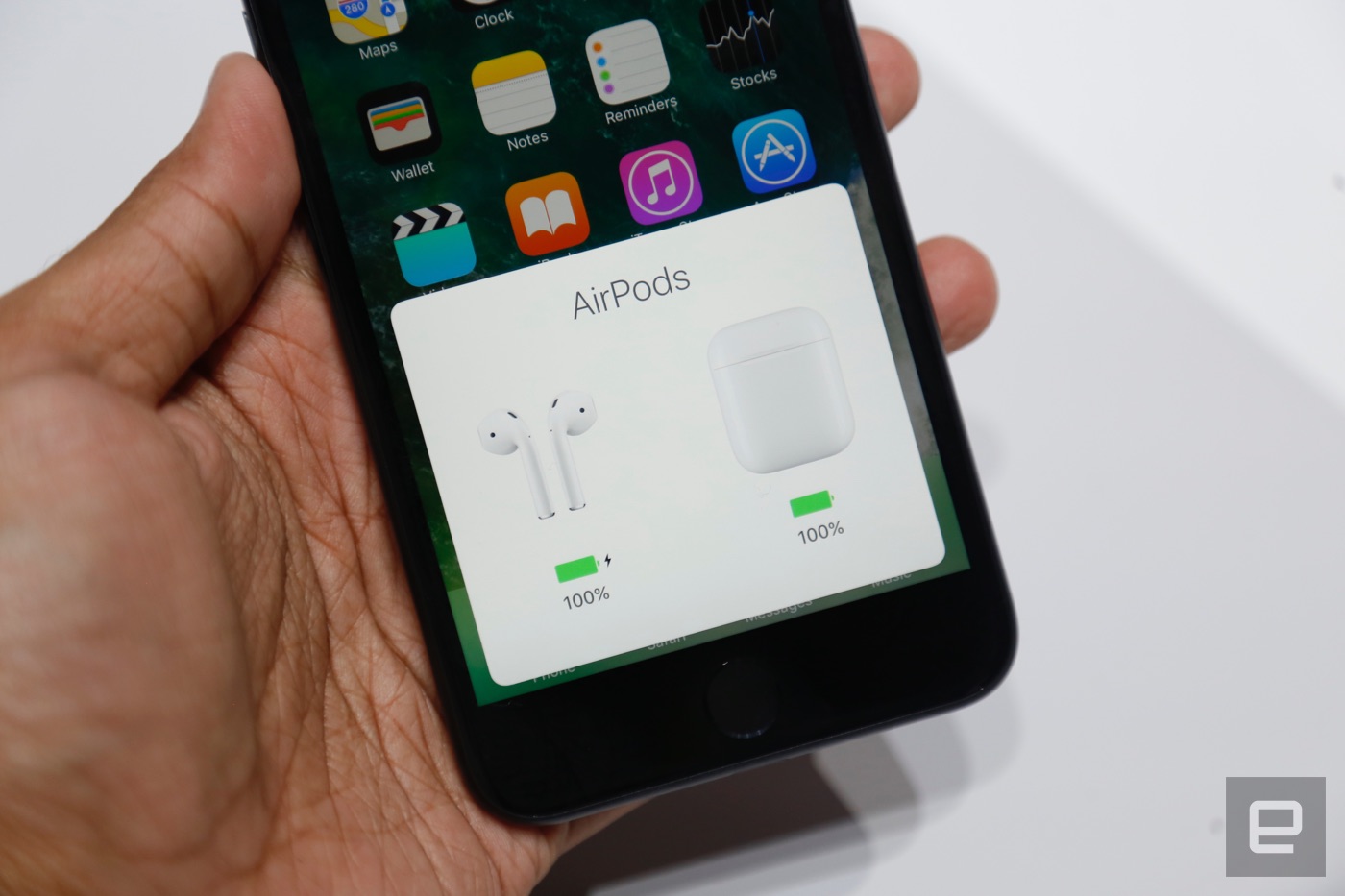 There are other things to keep in mind, too. You'll be able to pop the 'Pods back into their carrying case for some extra juic,e though I'm sure some people will be miffed that there's no way -- a wired adapter, maybe -- to get them juiced up while keeping the music flowing. Having used wireless earbuds like the Earin in the past, this isn't a huge deal for me, but I wonder if Apple will eventually cook up an accessory to address this subtle issue.

It's far too early to tell if the AirPods are worthy wearables or just a neat gimmick that builds on the promise of Apple's increasingly wireless future. At this point, I'm not terribly thrilled, but here's hoping the final models are capable of greatness.

Click here to catch all the latest news from Apple's "See You" event.
In this article: airpods, apple, audio, av, earbuds, earpods, gear, hands-on, iphone7event, preview
All products recommended by Engadget are selected by our editorial team, independent of our parent company. Some of our stories include affiliate links. If you buy something through one of these links, we may earn an affiliate commission.