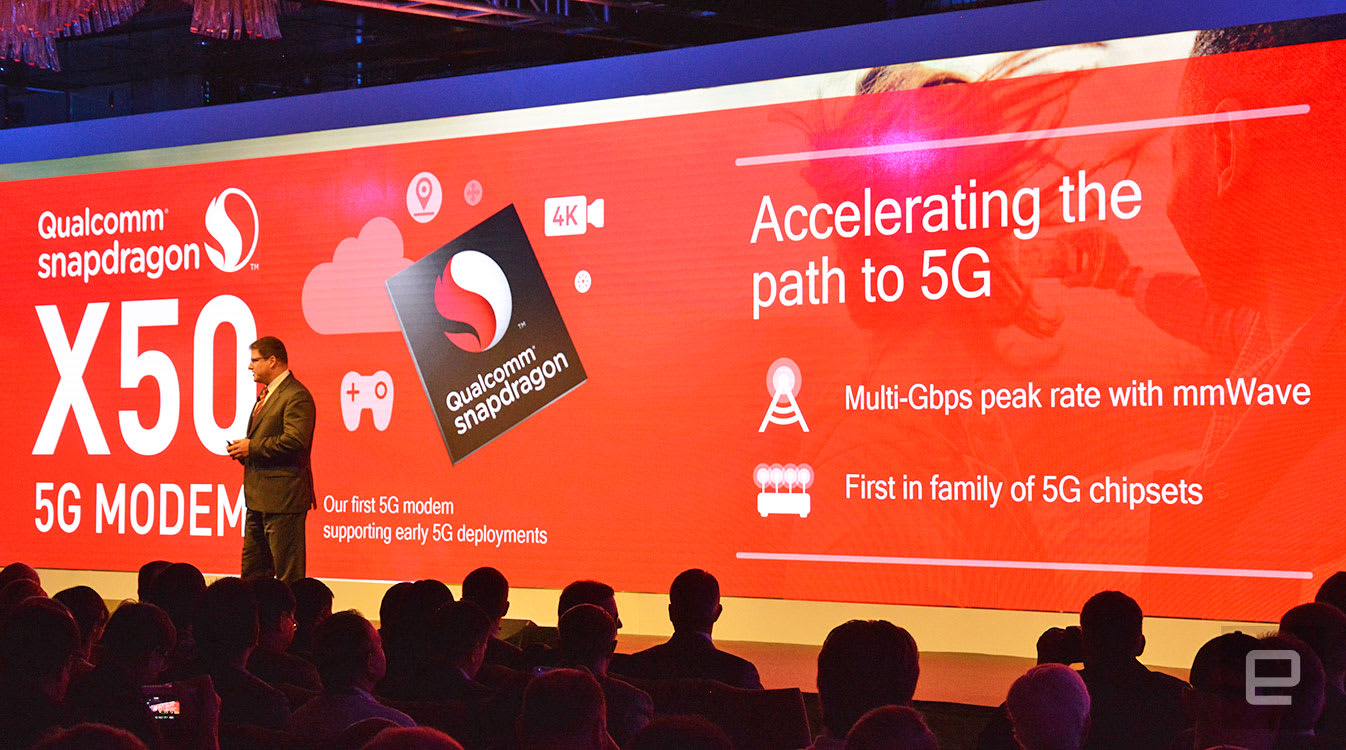 As we saw back at MWC, 5G trials are already well under way around the world, and such efforts are recently boosted with support from the FCC plus the EU. Verizon has stated that it's aiming to implement 5G at some point in 2017, but today, a mobile chip giant has given us a more specific time frame. At the Qualcomm 4G/5G Summit in Hong Kong, the company announced its very first 5G modem, the Snapdragon X50, which will support download speeds at up to 5 Gbps -- a super impressive number considering that we've only just started tapping into the Gigabit space with 4G LTE, let alone the more common 450 Mbps, 300 Mbps or even just 150 Mbps download speeds on our phones these days.

Furthermore, we're told that X50-powered devices "are expected to be available during the first half of 2018." The timing makes sense as the finalized 5G standard should arrive in the same year, and operators like Verizon will certainly be needing test devices soon -- especially since it's been trialling the 28 GHz millimeter wave (mmWave) band which is what the X50 will support initially (on top of 4G LTE). That said, Qualcomm does stress that this modem is designed for early 5G deployments, in the sense that it's leaning more towards the experimental soft rollouts, so chances are it may be a while before mainstream devices integrate the X50 (or even a newer modem chip, for that matter).

The whopping 5 Gbps download speed is achieved by using a generous 800 MHz bandwidth in the mmWave spectrum. While it's true that such a high frequency is limited by its penetration range, such modems and cells will make use of MIMO antenna technology with intelligent beamforming and beam tracking to bounce signal off walls, in order to go around obstacles. It'll be years before we go fully 5G so early deployments will likely have limited coverage, but don't worry, as the X50 can seamlessly switch between 5G and Gigabit LTE, so long as it's paired with a Snapdragon processor with an integrated Gigabit LTE modem -- like the X16 announced earlier this year. Such a boost in connection speeds will let us look forward to new use cases in the mobile world -- real-time augmented reality plus virtual reality, super high quality multimedia content, instantaneous cloud computing applications, you name it.

In this article: 5g, gear, gigabitlte, lte, mmwave, mobile, modem, qualcomm, snapdragonx50, x50
All products recommended by Engadget are selected by our editorial team, independent of our parent company. Some of our stories include affiliate links. If you buy something through one of these links, we may earn an affiliate commission.