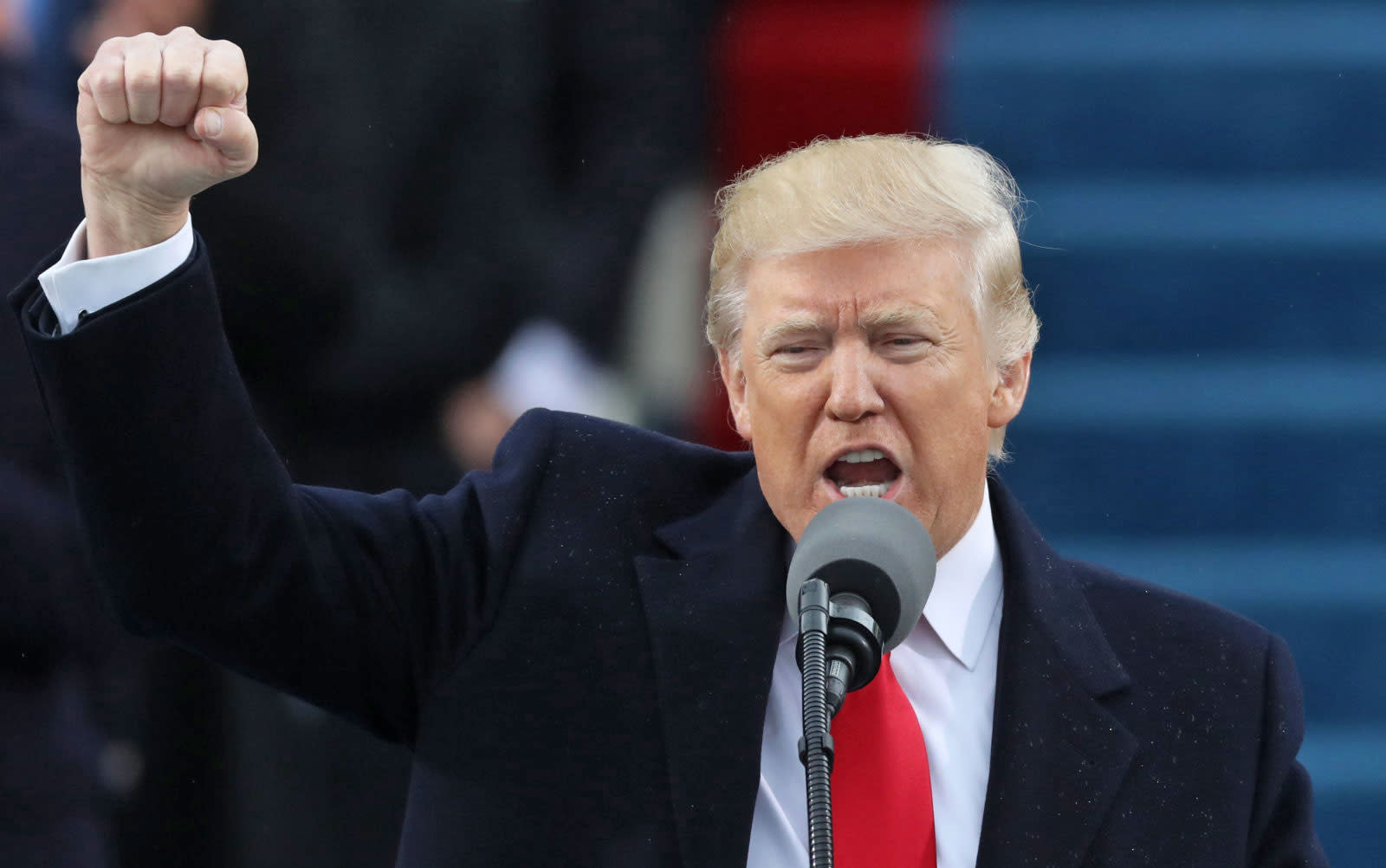 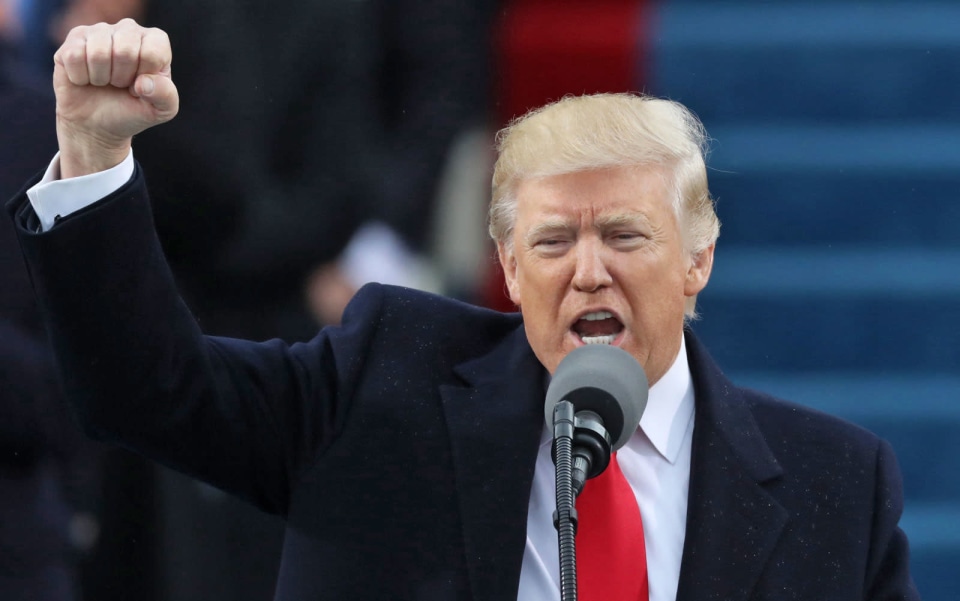 For those who opposed Donald Trump's ascension to the White House, the first week of his presidency confirmed a number of fears. Many of Trump's perceived worst characteristics were on full display. He openly lied about crowd sizes at his inauguration, made his baseless accusations of mass voter fraud a matter of federal investigation and laced his inauguration speech with nationalist overtones.

Work began on two of the big initiatives Trump focused on in his campaign: dismantling the Affordable Care Act and building a wall on the Mexico border. The week also featured major moves relating to issues that we focus on here at Engadget: The new administration's disregard of climate change and the environment was on full display, and a major foe of net neutrality is now leading the FCC.

The move to dismantle environmental regulations has easily been one of the administration's biggest focus. Trump signed an executive order Tuesday to resume work on the Keystone XL pipeline and Dakota Access pipeline, two oil lines with extremely contentious histories. President Barack Obama rejected the Keystone XL Pipeline in 2015, arguing it would undercut the US's place as a leader in the fight against climate change and temporarily blocked work on the Dakota Access pipeline as well. The New York Times noted the pipelines "were more about symbol than substance," but Trump immediately reversing Obama's orders around them shows that environmental concerns are not a priority.

Signing orders to move forward with the construction of the Keystone XL and Dakota Access pipelines in the Oval Office. pic.twitter.com/OErGmbBvYK

The Environmental Protection Agency has also been under siege. After the inauguration, Trump immediately froze all grants and contracts. It's not totally unprecedented, as new administrations often halt ongoing work in order to review it, but this freeze isn't the only way the EPA has been targeted.

The new administration also banned all EPA employees from posting updates on social media and speaking to the media. The research arm of the Department of Agriculture was under a similar ban that was lifted a day later. On Thursday, USA Today reported that the ban on grants had been lifted after less than a week. "We finished our review process," said acting EPA spokesman Doug Ericksen. "As of now, nothing has been delayed. Nothing has been cut. There was simply a pause, and everything's up and running." Regardless, it's concerning to see the government keep its employees from speaking to the public.

Similarly, NPR reported that the EPA will have to submit its studies and data for review by "political staff" before public release. These reviews could contradict the agency's scientific-integrity policy, which was put into place in 2012 and prohibits "all EPA employees, including scientists, managers and other Agency leadership from suppressing, altering or otherwise impeding the timely release of scientific findings or conclusions."

Considering all this, it's no surprise that when the White House website was updated last Friday, all references to climate change were removed. All of WhiteHouse.gov was updated, and all of the old Obama site's content was archived, so it's not as if those pages would have lived on anyway. But with not a single mention of climate change anywhere to be found, it's clear the administration doesn't believe it is a priority. Reports have also suggested the EPA's climate-change data and research could be scrubbed from its site, but it doesn't look like that's happening in the near future.

As the week went on, a few brave souls within the government took to Twitter to stick it to Trump. On inauguration day, the official National Park Service Twitter account retweeted a photo comparing the size of Trump's inauguration crowd to Obama's -- after which all Department of the Interior employees were told to stop using official Twitter accounts.

For later, after those Badlands National Park tweets get deleted, here's what happened. ht @migold pic.twitter.com/b5vnKjwDnn

Some defied those orders, though -- the best example thus far was the Twitter account for the Badlands National Park. Earlier this week, someone with the account's password started posting data on climate change (supposedly they were posted by a former employee who still had access to the account). Naturally, the tweets were quickly deleted, but events like this and the EPA's gag order haven't reflected well on the new administration.

Oddly enough, the administration may be making things harder for itself by deleting the handful of tweets that have popped up on government accounts. Deleting tweets could violate the Freedom of Information Act if they weren't properly saved; there's a reason @POTUS and other such accounts note that "tweets may be archived." Trump himself may have already violated that rule by deleting a few tweets that had typos in them.

Speaking of Twitter, the digital handoff between Obama and Trump hasn't been all that seamless. There's been a number of gaffes, perhaps most publicly with the @POTUS Twitter account. Those following that account while President Obama was in office were supposed to be transferred to a new account, @POTUS44. That archival account presents everything tweeted from the @POTUS handle while Obama was in office.

Thanks to a bug in Twitter's transition tool, however, anyone who followed @POTUS44 after noon on inauguration day was set to follow @POTUS as well, and lots of people who unfollowed @POTUS found that it didn't stick. It was quickly sorted out, and obviously not the government's fault, but it was another bungle that got plenty of attention.

More crucially, a number of useful resources from the official White House website under the Obama administration were removed without being replaced. For example, there's no more Spanish-language version of the site, something that existed under both Obama and his predecessor, George W. Bush. In addition to removing climate-change pages, the White House website now makes no mention of LGBTQ rights -- no big surprise, given the administration's lack of focus on those areas, but still troubling to the millions of Americans who care about them.

This afternoon, I was informed that @POTUS @realDonaldTrump designated me the 34th Chairman of the @FCC. It is a deeply humbling honor. pic.twitter.com/Joza18aP33

But the most important news regarding the internet during Trump's first week came when Ajit Pai took over as FCC commissioner, succeeding Tom Wheeler. Pai's ascension was no surprise, but it raises concerns for those who support net neutrality. Pai has been a staunch opponent, and the Trump administration has made it clear it values growing business over upholding consumer-friendly policies. Disappointing, to be sure, but at the very least Trump can't banish net-neutrality protection with the wave of a pen -- it'll take some time to roll back what happened under Obama and Wheeler.

Those are just a few of the things that happened in an extremely busy first week for Trump. All told, the new president signed 12 executive orders, a level he certainly won't keep up. (President Obama averaged 35 executive orders a year during his tenure.) The breakneck pace may slow down, but President Trump's priorities are quickly coming into focus. Sadly, a free web and scientific integrity aren't among them.

In this article: badlands, climatechange, culture, donaldtrump, epa, internet, politics, security, twitter
All products recommended by Engadget are selected by our editorial team, independent of our parent company. Some of our stories include affiliate links. If you buy something through one of these links, we may earn an affiliate commission.