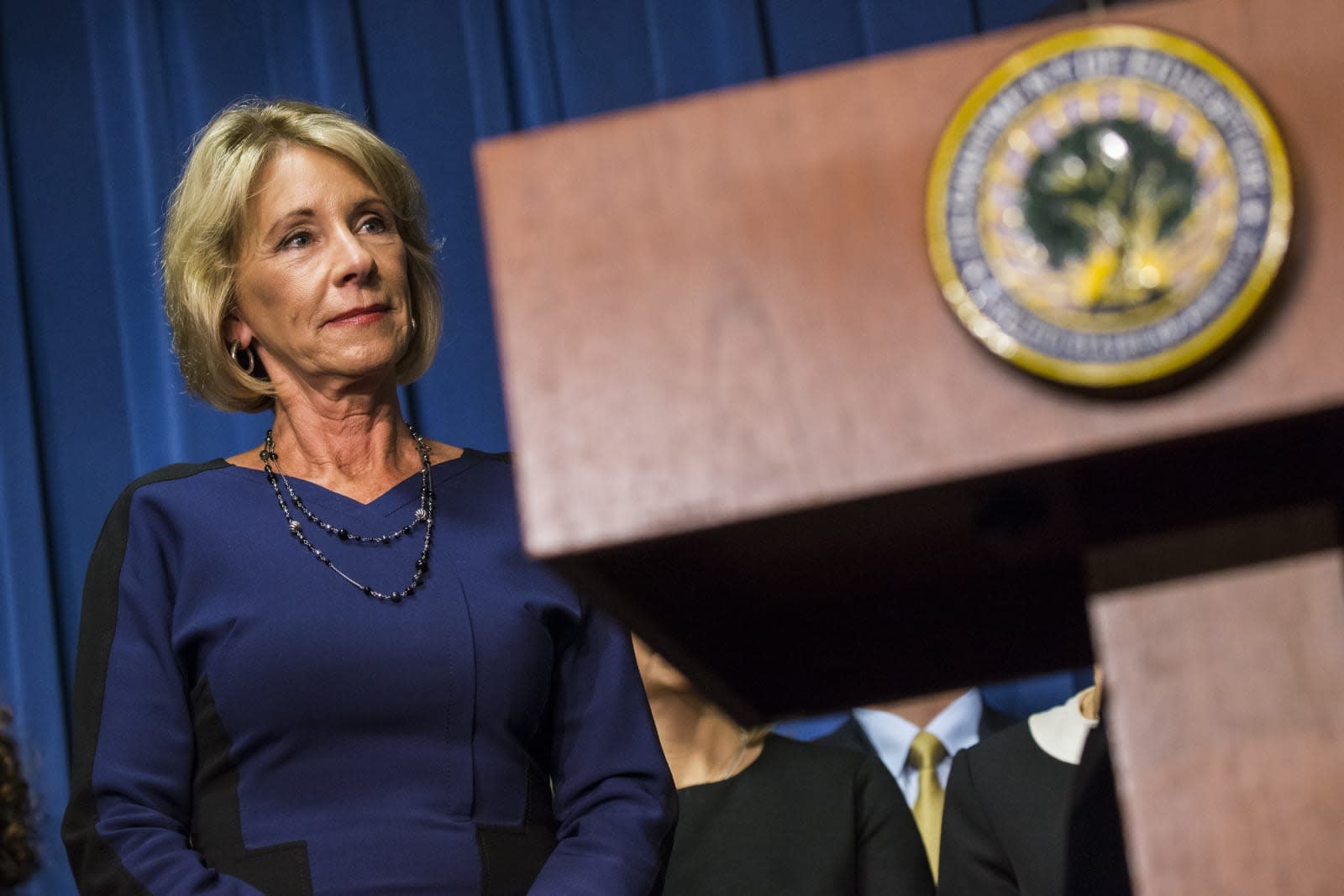 This week the United States Senate confirmed Betsy Devos as the new secretary of education. Despite a shaky performance during her committee hearings, where she seemed to suggest guns belonged in schools to defend against grizzly bear attacks, DeVos managed to clear all the necessary hurdles to become part of Trump's cabinet. But it wasn't easy: Vice President Mike Pence had to be summoned to the Senate floor to break a 50-50 tie, after two senators from his own Republican party opposed her nomination.

DeVos will be responsible for advising Trump on federal policies and programs related to the education sector, which includes having an impact on public school standards and the curriculums being developed. She'll also direct, supervise and coordinate all activities of the US Department of Education, whose mission is to "ensure equal access to education and to promote educational excellence" across the country. In other words, DeVos is set to lead a government agency designed to shape the nation's future. Democrats have been outspoken against DeVos since Trump announced her nomination. They believe she's not fit for the role because she never attended public school, nor did her billionaire husband Dick DeVos or any of their four children. Not being a product of the public school system isn't a dealbreaker, though. Bigger concerns focus on the fact that DeVos has spent her career in Michigan as an advocator for using taxpayer dollars to fund voucher programs for families to spend on private and religious schools.

While DeVos has not specified how she plans to handle STEM (science, technology, engineering and math) education on a federal level, there's enough evidence to suggest religion may influence her decisions. In an interview from 2001, when asked about Christian schools relying on philanthropy, DeVos said, "There are not enough philanthropic dollars in America to fund what is currently the need in education ... Our desire is to confront the culture in ways that will continue to advance God's kingdom."

If she takes that same approach in her new position, DeVos could create an environment where accepted scientific theories such as evolution could be taught alongside faith-based pseudoscience such as intelligent design. You also have to wonder if she'll continue Obama's efforts to teach kids how to code and other tech-forward skills. During his presidency, Obama created the Computer Science for All initiative, which included a $4 billion fund for states to develop K-12 curriculums with a hands-on approach to new technologies.

President Trump, meanwhile, is planning to repurpose $20 billion from the federal education budget to expand voucher programs. Even though low-income families could benefit from this "school choice" proposal, the institutions on the receiving end would be private or affiliated with a religion. The proposal will likely hit some roadblocks, though, since it has to get approved by Congress and it's not certain that states are going to be interested in such grants.

Still, there could be major consequences if it does go through. David E. Kirkland, an English and Urban Education professor at New York University, says DeVos and Trump could promote educational policies that support "alternative facts" and "fund programs aimed at discrediting longstanding scientific knowledge and traditions."

The situation is magnified when you consider Trump also recently tapped Jerry Falwell Jr. to lead a task force that will suggest higher education reforms. He's the president of Liberty University, one of the country's most vocal Christians and a young Earth creationist. According to The Washington Post, faculty members at Liberty University take pride "in teaching evolution alongside biblical creationism." Sure, that doesn't mean DeVos and Falwell Jr. will enforce these views under the new administration, but it could raise their profile and reignite the debate over how things like intelligent design are presented.

Kirkland says that if DeVos sees STEM education as promoting a liberal agenda, she (along with Falwell Jr.) could use the Department of Education to defund programs designed to educate students about topics such as global warming, climate change and pollution. Despite the influence of religion on her political views, though, a member of Trump's transition team recently told Mother Jones that DeVos does believe "in the legal doctrine of the separation of church and state." Senators like Al Franken, who voted against DeVos, will try their best to ensure that this separation indeed exists and STEM education remains a priority for Trump's team. "I've written legislation into law to strengthen STEM education and have continuously worked to ensure that our students are prepared for 21st century jobs," he told Engadget. "Secretary DeVos, on the other hand, has a long history of dangerously anti-science views and has deep connections with anti-science organizations."

Franken said he plans to hold DeVos accountable during her tenure, not only in her STEM efforts but also other areas. DeVos said during her first speech as secretary of education that she believes people should be more open to views other than their own, advice that Democrats hope she follows herself. "We believe students deserve learning environments that foster innovation and curiosity, and are also free from harm," she said.

DeVos added that she's committed to working with all parties on the end goal: to always put students first. But that's easier said than done, and we won't know if that will actually be the case until she sets forth a clear strategy for educators and students.

In this article: betsydevos, culture, departmentofeducation, donaldtrump, education, government, politics, science, secretaryofeducation, stem, stemeducation
All products recommended by Engadget are selected by our editorial team, independent of our parent company. Some of our stories include affiliate links. If you buy something through one of these links, we may earn an affiliate commission.