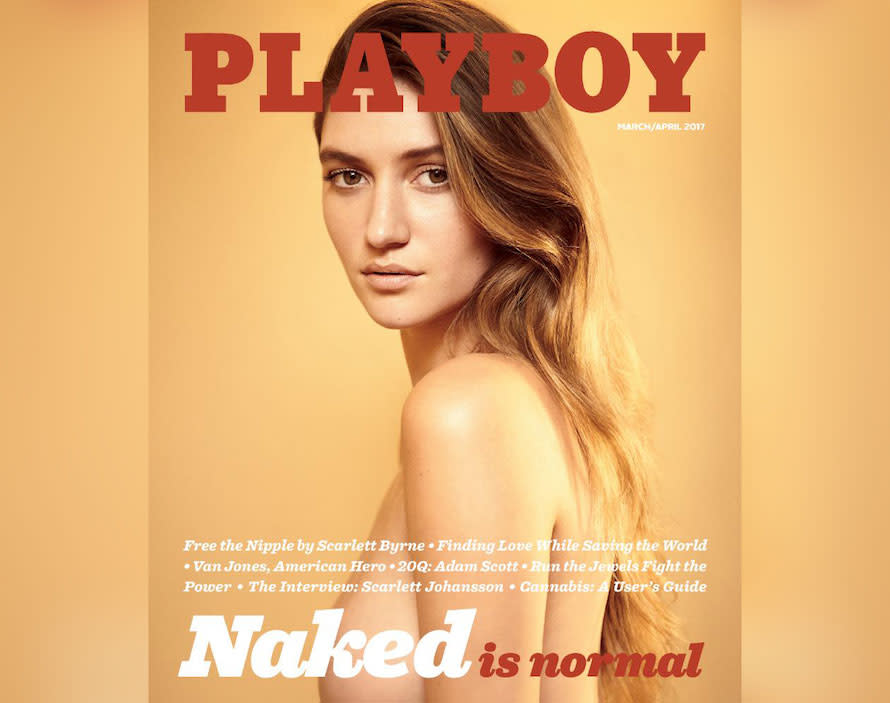 Playboy is bringing nudity back to the magazine a year after striking totally bare bodies from its pages. In October 2015, the publication's CEO Scott Flanders said that nudity was "passé" when you can find it in any form imaginable online. But things have changed since last March's controversial nude-free issue, and now founder Hugh Hefner's 25 year-old son seems to be calling the shots. Cooper Hefner, chief creative officer, tweeted out an image with the following quote:

"I'll be the first to admit that the way in which the magazine portrayed nudity was dated, but removing it entirely was a mistake. Nudity was never the problem because nudity isn't a problem. Today we're taking our identity back and reclaiming who we are."

In a post outlining the "new Playboy philosophy," Hefner draws parallels of between himself and his dad, the present and the past. The commonality? "Both my dad and I understand, at its simplest form, what Playboy and the United States strive to represent in their greatest forms: freedom."

He reminds that the magazine published blacklisted writers during the McCarthy era and advocated for the LGBTQ community. Now, "just as the social and political pendulum had swung in liberals' favor, as history has shown time after time, the pendulum swings back."

As evidence of the former, he cites marriage equality going before the Supreme Court and the path to legalized marijuana. As for the latter, Hefner says that "the most vital intellectual discussion we can have is how to create a society that's as free as possible without ignoring the social and economic implications of our policy decisions."

It seems that Playboy, under the new direction, will be working to challenge conservative views and that bringing back nudity is just one way of doing so. The March/April 2017 issue will be the first with nudity reinstated.

Let's just hope that the reversal of said pictorial decision doesn't affect the stellar cover design that's graced the magazine this past year -- the retro, minimalist layouts and designs are too good. If the new issue is any indication, we're in good shape.

In this article: cooperhefner, culture, entertainment, nudity, playboy, sex
All products recommended by Engadget are selected by our editorial team, independent of our parent company. Some of our stories include affiliate links. If you buy something through one of these links, we may earn an affiliate commission.