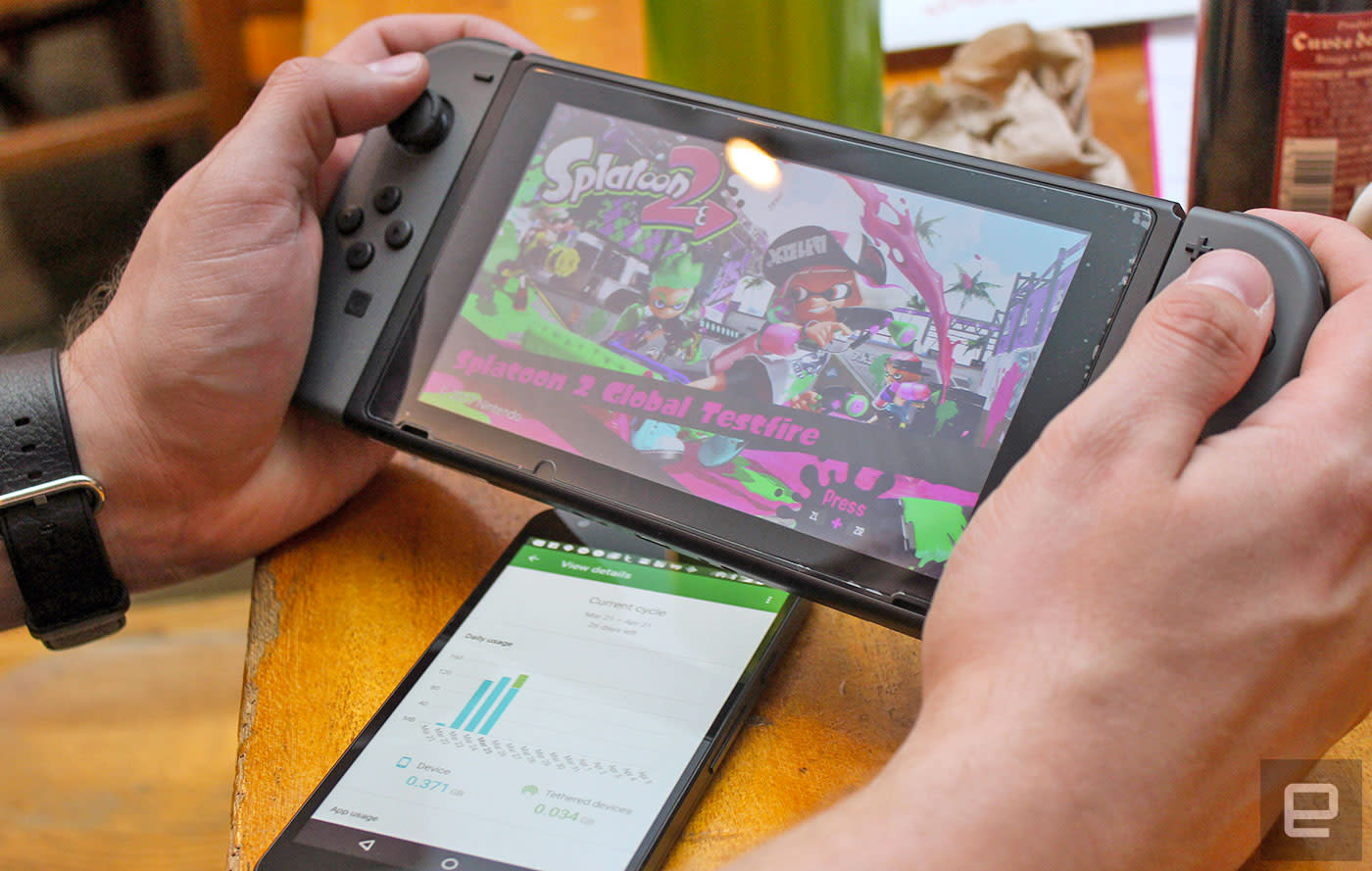 When Nintendo first revealed its new game console back in October, it chose to end the device's teaser trailer with a shot of a packed arena cheering an esports team. Its game of choice was Splatoon 2 for Nintendo Switch. The scene represented two things: Nintendo staking a claim in the competitive gaming space and a promise that the new console's portability would allow gamers to take that competitive online experience on the road. I put the latter half of that pledge to the test during last week's Global Testfire preview, and it held up better than I ever imagined.

I didn't recreate the trailer's Splatoon 2 segment shot for shot. The game's Testfire preview didn't have local multiplayer that I could use to strategize with teammates, and I certainly didn't take my console to an arena to compete in a spectator match. But I was caught outside of my house during one of the preview weekend's blocks of playable time. As an avid fan of the series, I was eager to sneak in a quick round of Turf War, but there was no reliable WiFi in the area. Desperate, I tethered my Switch to my phone's hotspot and braced myself for the inevitable notification telling me I'd gone over my data allowance for the month. The overage notification never came. It turns out that a single round of Splatoon 2 multiplayer barely eats up any data.

When my first round of LTE-powered multiplayer ended, I pulled up Project Fi's usage statistics. My three-minute game burned through a mere 0.011 gigabytes of data -- a little over 10 megabytes. That rate stayed more or less consistent through my second, third and fourth rounds, taking just 45.6 megabytes from my data budget for 20 minutes of online play (including time spent in matchmaking). While that's not a completely negligible amount of data, it's small enough to make a few mobile rounds manageable.

The entire experience felt like something that shouldn't work. Splatoon 2 was not only light on my data plan but also didn't play with any noticeable lag. Despite the higher latency of the LTE connection (compared to my cable home internet), my game ran smoothly, with no rubber banding, missed hits or sync issues. This is partially because LTE in my area is particularly strong, but Splatoon is also well suited to tolerating higher latency connections, as game modes task players with painting the game's environment more than attacking other players.

As neat as it was to play a multiplayer "home console" shooter on the go, Splatoon 2's data usage isn't technically out of the ordinary. According to mobile hotspot manufacturer Kita Enterprises, the average multiplayer game eats up about 17.5kb/s, or a little over one megabyte per minute. The rate varies from game to game. Battlefield 4 might hit that target, but MMO-like games like Destiny will demand a little more data. Any game on the lower end of the spectrum, like Splatoon 2, can theoretically be played over LTE without doing too much damage to your cellular bill -- but until now, there hasn't been much of a reason to use a mobile hotspot with a game console. Before the Nintendo Switch, console multiplayer games simply weren't portable.

Nintendo's successes are often tied to novelty. The novelty of motion controls. The novelty of a touchscreen. The novelty of 3D. For the Nintendo Switch, that novel experience is the ability to take your home console with you and play it anywhere. I fully expected Splatoon 2's online multiplayer to spoil the magic of the console's portability, but I was wrong. I doubt it was intentional, but the game's low data requirement lets it be just as portable as the console itself -- and that is incredibly novel indeed.

In this article: av, esports, games, gaming, google fi, hands-on, lte, nintendo, project fi, splatoon, splatoon2, switch, video, videogames
All products recommended by Engadget are selected by our editorial team, independent of our parent company. Some of our stories include affiliate links. If you buy something through one of these links, we may earn an affiliate commission.