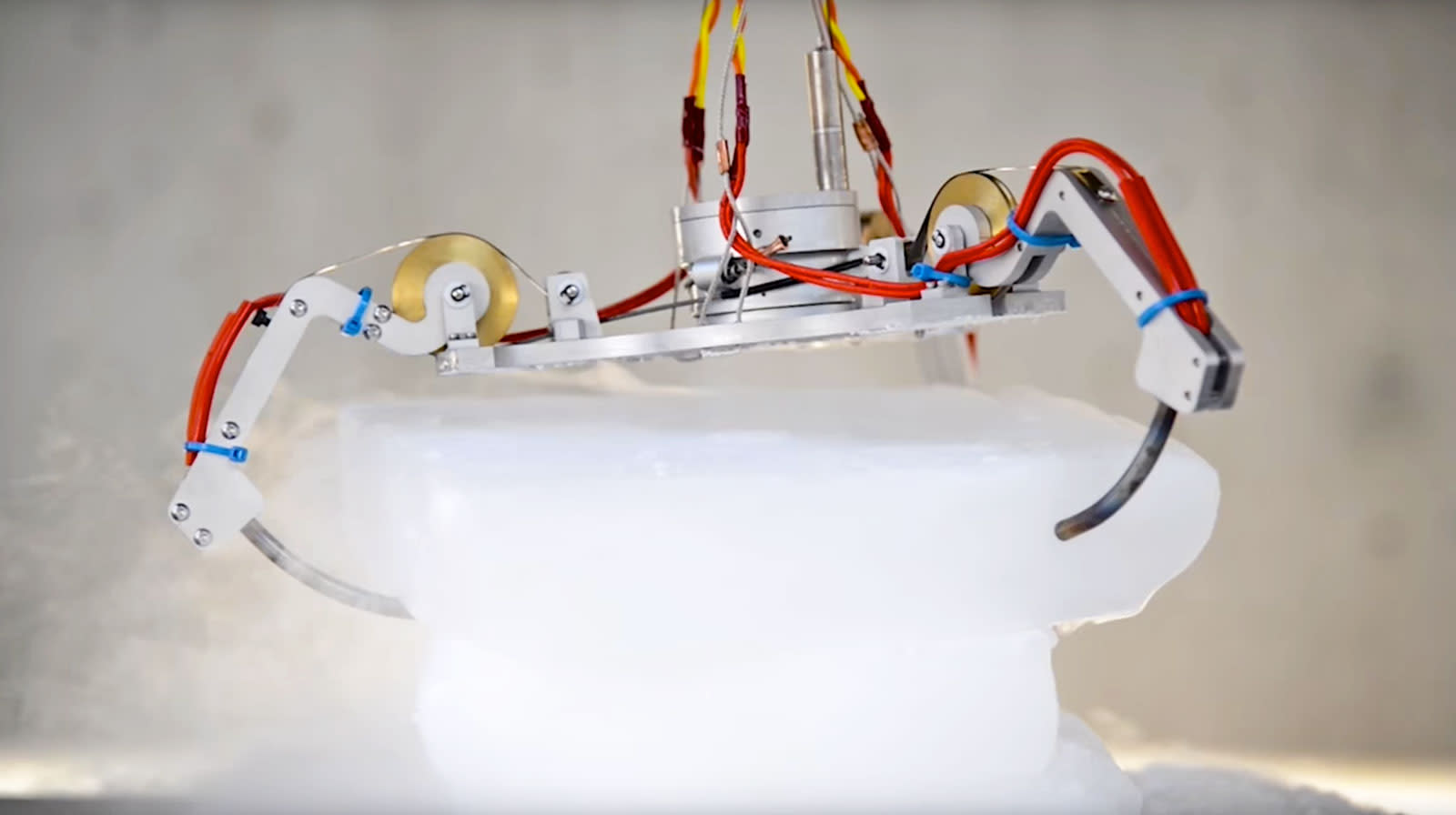 Delivering a rover to the surface of a distant icy world like Jupiter's moons Europa and Titan is only half the challenge. Once on the surface, the robotic explorers will have to contend with intense space radiation, plunging temperatures that drop to hundreds of degrees below zero and miles upon miles of ice before hitting the subsurface oceans that astronomers suggest may contain life. But NASA has a plan.

"Robotic systems would face cryogenic temperatures and rugged terrain and have to meet strict planetary protection requirements," Hari Nayar, of NASA's jet propulsion laboratory, said in a statement. "One of the most exciting places we can go is deep into subsurface oceans -- but doing so requires new technologies that don't exist yet." That's why, as part of its Ocean Worlds Mobility and Sensing study, the JPL has been developing the tools future rovers will need to successfully scout frozen planets and moons.

The first challenge will be making it through the ice. Europa's frozen crust, for example, is estimated to be anywhere between 6 and 12 miles deep. If NASA underestimates the crust's thickness, the rover could expend all of its available energy before breaking through, bringing the mission to a quick and inglorious end. So, rather than use conventional "melt probes" which inefficiently radiate heat to bore through ice here on Earth, the JPL is instead is developing a thermally insulated device that employs a chunk of heat-source plutonium to act as the energy source. A rotating blade at the bottom of the probe would chew through the ice below it, pushing the ice chips it produces through the device's body where they melt against the plutonium. The melt water can then be funnelled back up to the rover for biosignature analysis.

These rovers will also need to traverse the surface, not just burrow into it. The JPL has studied the effects of intense cold and vacuum on ice formation and found that ice actually behaves like grains of sand under such conditions. They pile up into berms and dunes, like the frozen deserts of Mars, only colder. Luckily, NASA's already got nearly two decades of experience with that sort of strata and should be able to adapt the same sorts of wheels that Spirit and Opportunity utilized.

Saturn's moon Enceladus is studded with gas vents and fissures, blowing material from the moon's interior out to the surface. These are ripe for exploration but future rovers are going to need pretty long arms to safely reach down into them. To that end, the JPL is developing a number of grippers that can extend far beyond the 8-foot reach of the Mars rovers. The agency is working on both a foldable boom arm that can pick up objects 30 feet and a projectile launcher that shoots a sampler as far as 164 feet.

But don't expect to see these systems outside of a NASA lab anytime soon. "In the future, we want to answer the question of whether there's life on the moons of the outer planets -- on Europa, Enceladus and Titan," Tom Cwik, who leads JPL's Space Technology Program, said in a statement. "We're working with NASA Headquarters to identify the specific systems we need to build now, so that in 10 or 15 years, they could be ready for a spacecraft."

In this article: astronomy, Enceladus, Europa, JetPropulsionLaboratory, JPL, Mars, Mars Exploration Rover, Mars rover, NASA, NASA Headquarters, rover, Saturn, science, space, Titan
All products recommended by Engadget are selected by our editorial team, independent of our parent company. Some of our stories include affiliate links. If you buy something through one of these links, we may earn an affiliate commission.